Photo artist Svetlana Bailey’s focus is on the insubstantial, the ephemeral, the ethereal and the seemingly other-worldly. Her more recent works follow on from this to consider the paradoxical desires for freedom and belonging.

A “now you see it, now you don’t” sense pervades and unites both her muted color photographs of fog landscapes and the empty interiors in the rare and retro format of daguerreotype, a technique first developed in the nineteenth century and the very early days of photography. The complex and slow daguerreotype process is the antithesis of the ‘click and send’ instantaneous image capture and hyper real fluorescent

hues of photo media in the digital age.

The Mirage works are from Svetlana Bailey’s recent artist residency in Chongqing, China, where she worked with artist, Li Junyi to study the daguerreotype medium. When back in Sydney Svetlana scanned the daguerreotypes using twenty-first century photo media technology to produce extra large-scale print versions. The interiors are exhibited in both formats in Mirage,

along with color photographs taken at sites in Sichuan Province and the outskirts of Beijing chosen for their fog-shrouded ethereality that enhances the sense of vastness, of stillness and the mystery of abandonment. The blanketed landscape is revealed as a place for introspection and fantasy, stimulating ideas of boundlessness and provoking uncertainty of perception and consequent sense of isolation and insecurity. 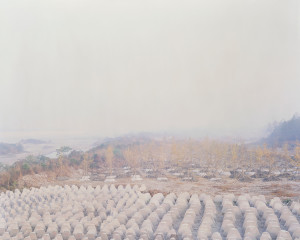 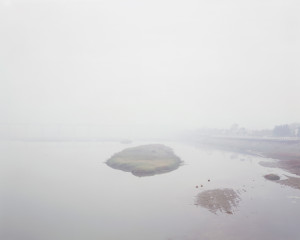 As background to Mirage the artist has provided the following insights into her concepts and choice of formats:

In this series, I’ve photographed empty interiors using daguerreotypes, and combined them with large color prints taken in boundless surroundings. I’ve used daguerreotypes because they appear to me like a breath of fog on a mirror. The image looks so fragile that one wonders how long it will last, and in fact it could be easily wiped off with a finger. There is intimacy required when viewing daguerreotypes, which is why I worked with interiors. Traditionally, to view a daguerreotype one would hold it in one’s hand and move it around, because sometimes the positive is visible, sometimes the negative, and sometimes just one’s own reflection. The entire image can’t be said to be visible at once, because it’s not a graphic image, it’s an optical phenomenon, so it varies based on the viewing environment. For example there has to be dark areas in the viewing room to be able to see the dark areas in the image.

Scanning and printing the daguerreotypes freezes them and the large prints reveal an unusual combination of scales. When enlarged, the imperfections of the hand made process become outsized. This contradicts the incredibly fine detail of the daguerreotype, (they’re still the highest fidelity of any photographic process). This combination of fine detail and imperfections for me is like the internal experience of a memory. There is a mixture of vivid, precise elements together with areas that are unclear and fluid.

I’ve considered one’s experience of the surroundings, where there is an interaction between the inner experience and the external environment. Transiting between the inner and outer is synonymous with any journey from one world to another. This is a constant process that I associate with ethereality.

This is Svetlana Bailey’s second solo exhibition with Artereal. Since completion of her BFA (Hons) at COFA in 2010 Svetlana Bailey has undertaken residencies at the prestigious Three Shadows Photography Art Centre outside Beijing and at Studio 501, Chongqing, China and presented her folio for review at Les Rencontres des Arles, France in 2013, She has had two solo exhibitions with the Queensland Centre for Photography, is the winner of the Perth Centre for Photography 2012 CLIP award and a finalist in the Ulrich, Churchie and Hazelhurst Works on Paper prizes in 2013. Her works are in the Artbank Collection and significant Australian corporate and private collections.
Barbara Dowse
Curator