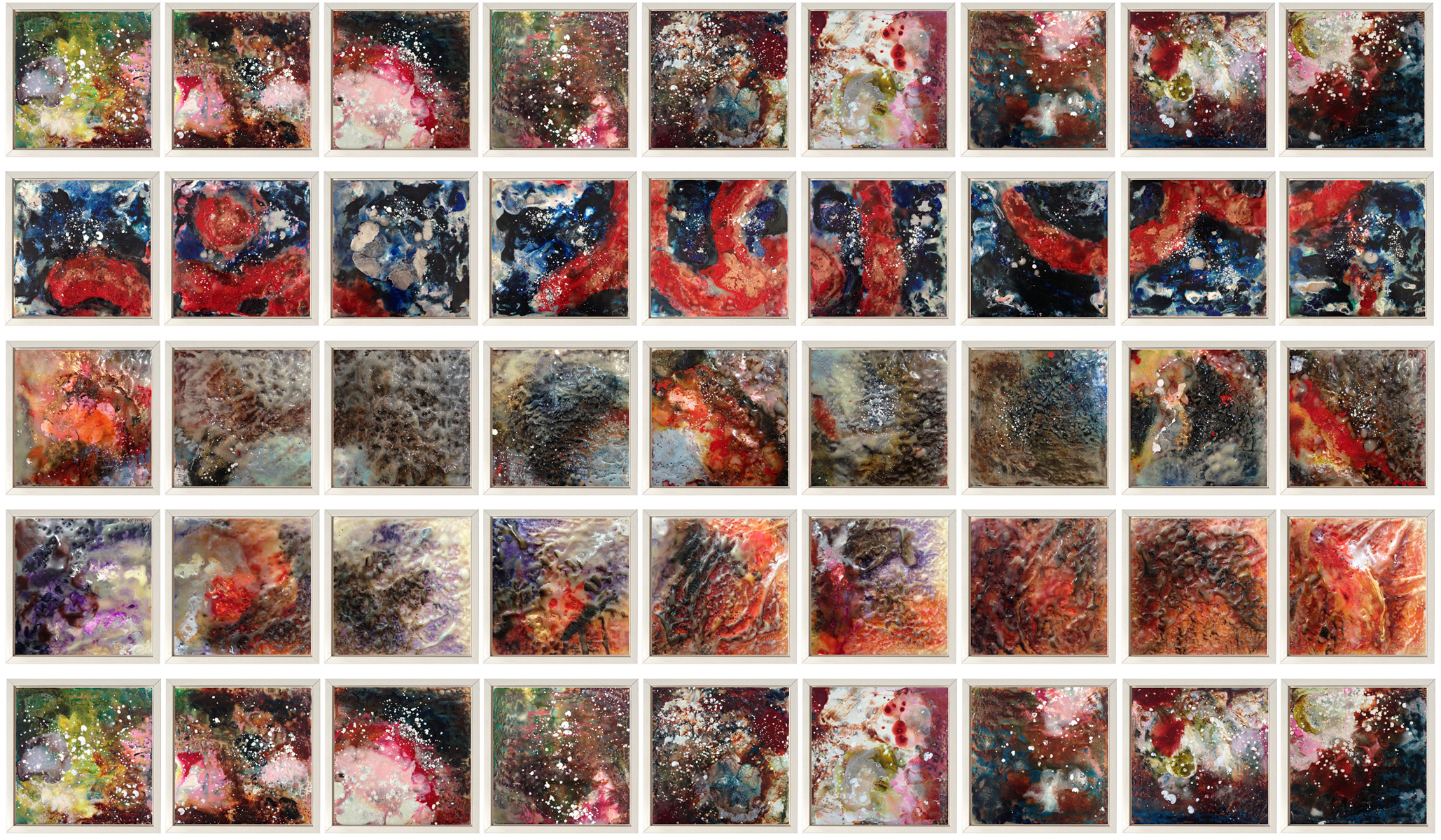 Inhale: Receiving The Divine Gift is the second in Noula’s planned trilogy of installations encompassing the phenomenon and significance of breath. The sequence commenced with Breathing Space, a grouping of enigmatic female heads cast in transparent resin and set within an atmospheric light and sound scape. Breathing Space explored the ‘idea of us – as beings for this planet and the concept of a ‘preparatory void’ in anticipation of our arrival’. A selection of these works is included in Inhale: Receiving The Divine Gift to enhance the narrative and convey the range and continuity of the artist’s creative practice.

Breath is an elusive concept; it is within us and it surrounds us and is the connecting invisible force that is awareness. For Noula, breath is mystical and her works explore and inhabit that fleeting balance between the known, the unknown and unknowable. The universal magnitude and the minutest particles embody the range and vast spaces Noula traverses to interpret and to convey visually and conceptually a sense of the divine gift of breath that can open up space, time, body and mind.

The intensity and the power of this vision are encapsulated in the ‘as above’ series of wall works in the archaic and alchemical medium of encaustic that fuses rich colored pigments with heated beeswax. The celestial expanses and fiery molten energy of creation are captured in the cratered surfaces and the pin-spot accretions of each compressed stanza of the multi-paneled works that frame sublime cosmic moments and panoramas of awe and wonder. 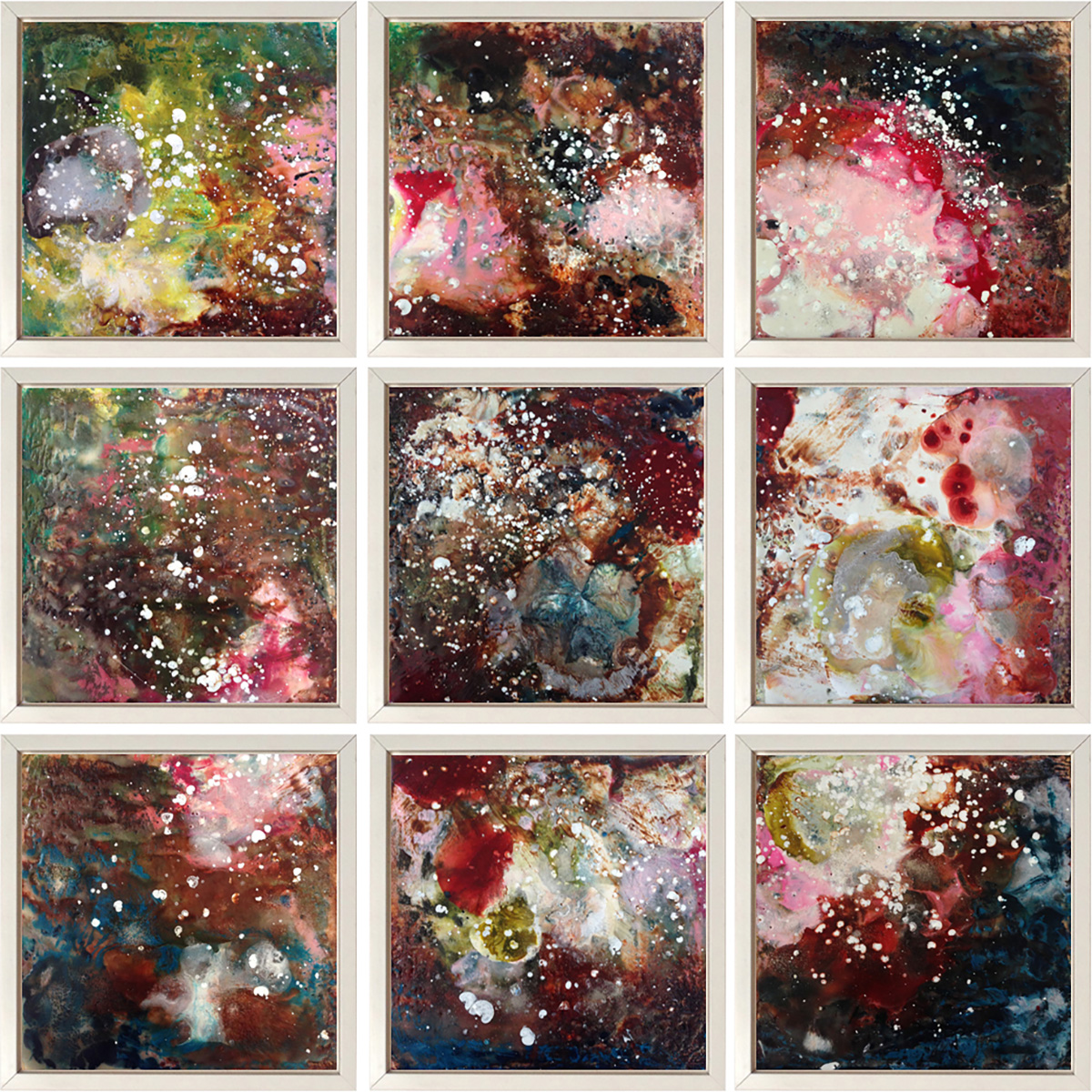 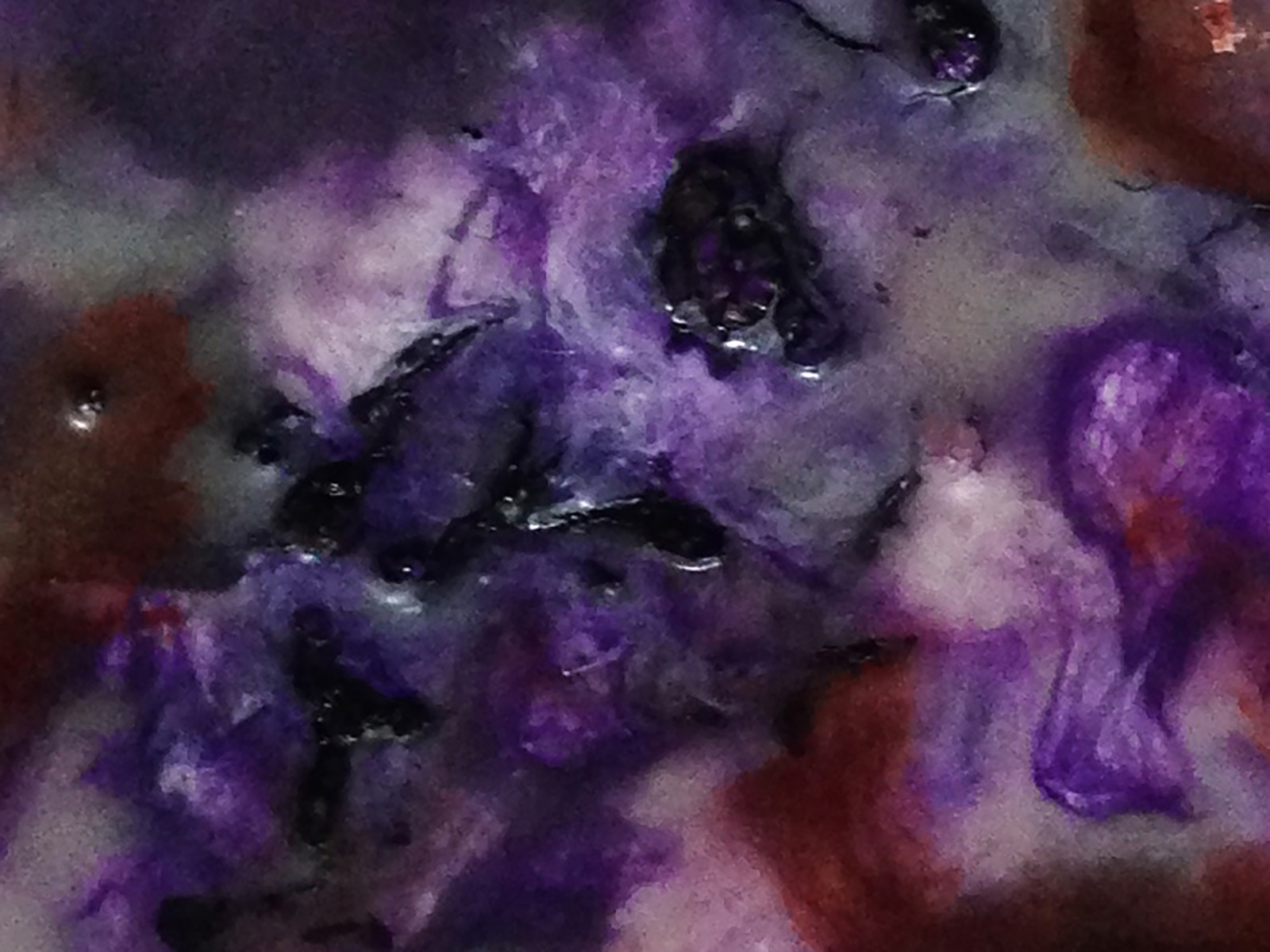 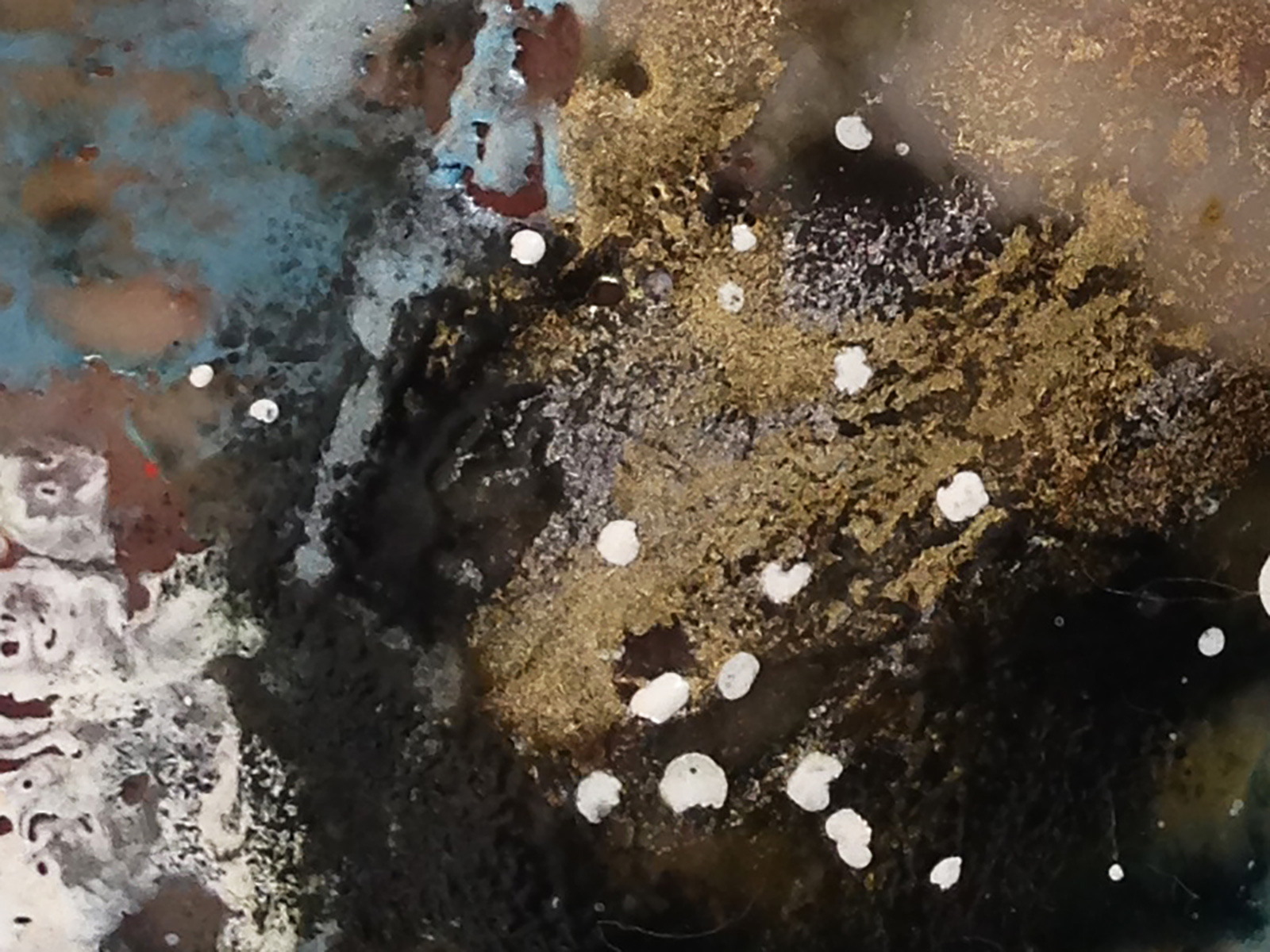 The sentiments and emotions evoked with the creation of each sequence are revealed in the color palettes of ‘as above i-iv’ that range from the fiery burnished oranges and bronzes of the igneous cosmological realm of ‘as above i’ to the ‘soft pinks, regenerative greens and yellows of ‘as above iv’.

Recurring fragments of the ‘Ohm’ character, that is both a primordial sound and a visual symbol, punctuate the ultramarine and cinnabar surfaces of the series ‘as above ohm’. ‘Ohm’ is at once a humming and droning sound, sometimes known as ‘the sound of the universe’, and for many Eastern philosophies is a visual symbol that ‘represents the divine within us’. The form is embraced by the artist in recognition of the meditative and transformative state both during creation and with breathing.

Works of art are reflective of an artist’s Intentions, vision and experiences. They are a form of storytelling. Gathered within the charismatic space within the gallery is a grouping of ‘artifacts’; staffs or story poles, symbolic of an evolutionary path or a form of pilgrimage. Each is layered with accumulations of wax imbedded with fragments of shell and crystal, or is strung with talismanic found objects. These same materials, shell, crystal and glass are often integrated into Noula’s mosaics, another art form from her extended practice.

The ritual objects, which Noula titles ‘spirit sticks’, are seemingly to support a quest or path to be taken in both a spiritual and physical or a metaphorical sense. They are at once symbolic of a universal search and the artist’s own personal quest for meaning; particularly poignant and cathartic for the artist following the recent death of her mother. Many of the embellishments, skeletal shell fragments, feathers, threads, glass ‘eyes’ and markings that resemble cyphers for life and light from their Greek heritage acknowledge their shared heritage and stories. 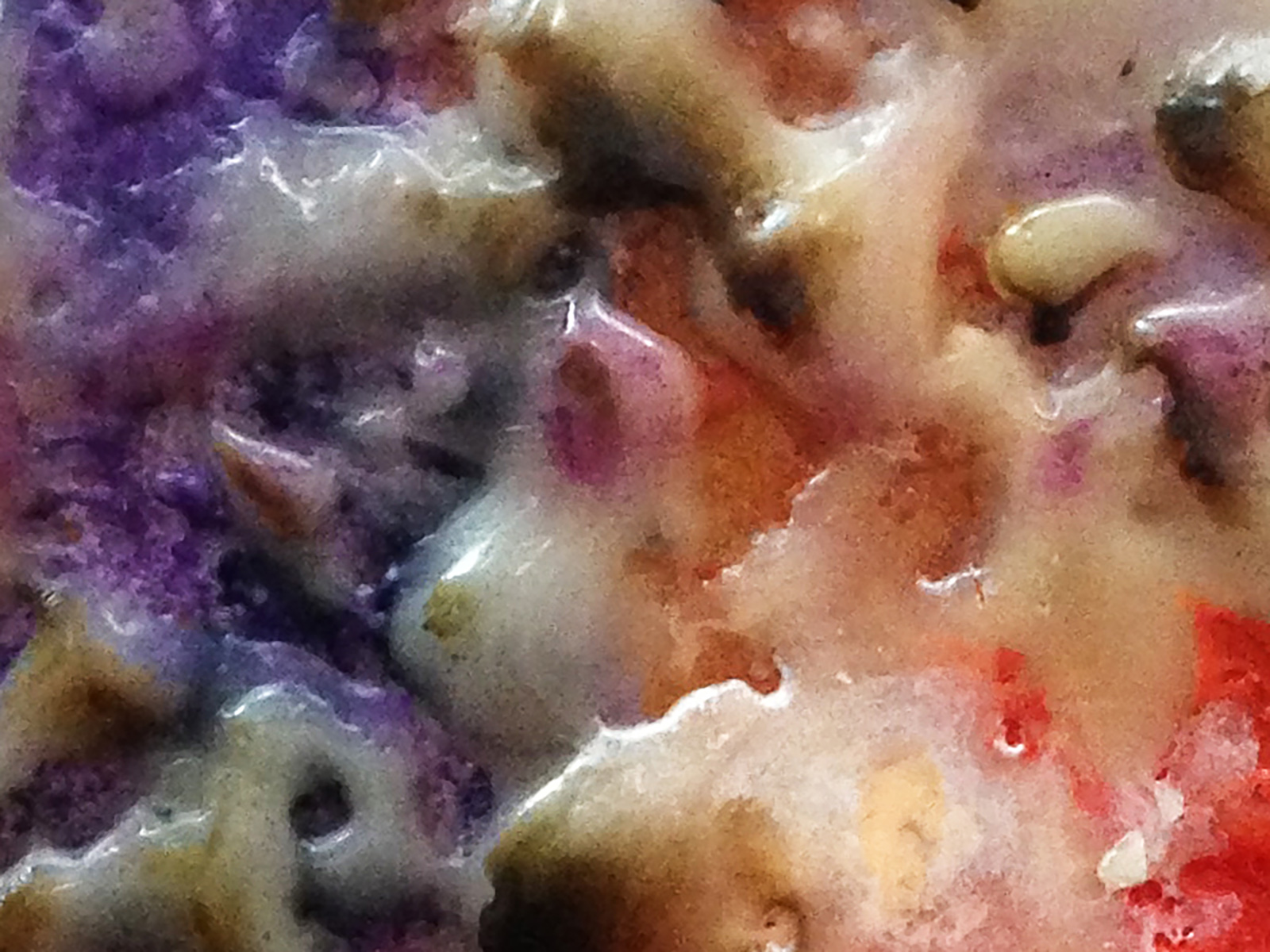 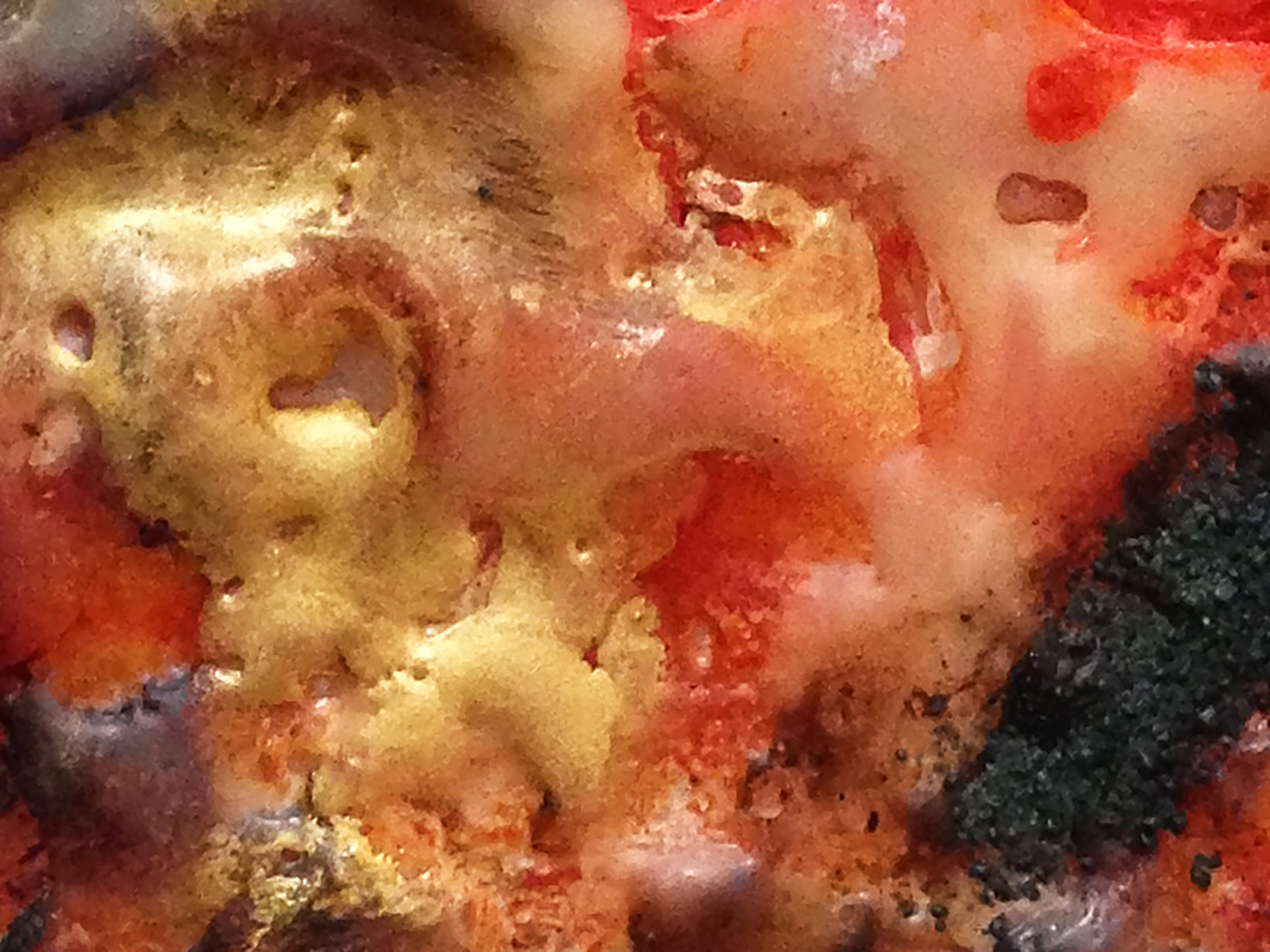 A proposed summation body of work, Exhale, will close the trilogy as signaled by the artist in her earlier observation: “… it occurs to me that though Breathing Space can be captured, it cannot be contained. Just like breathing – this gift of life dies the moment we capture it. We exhale moments after we inhale. Life starts and ends in these moments.”
Barbara Dowse