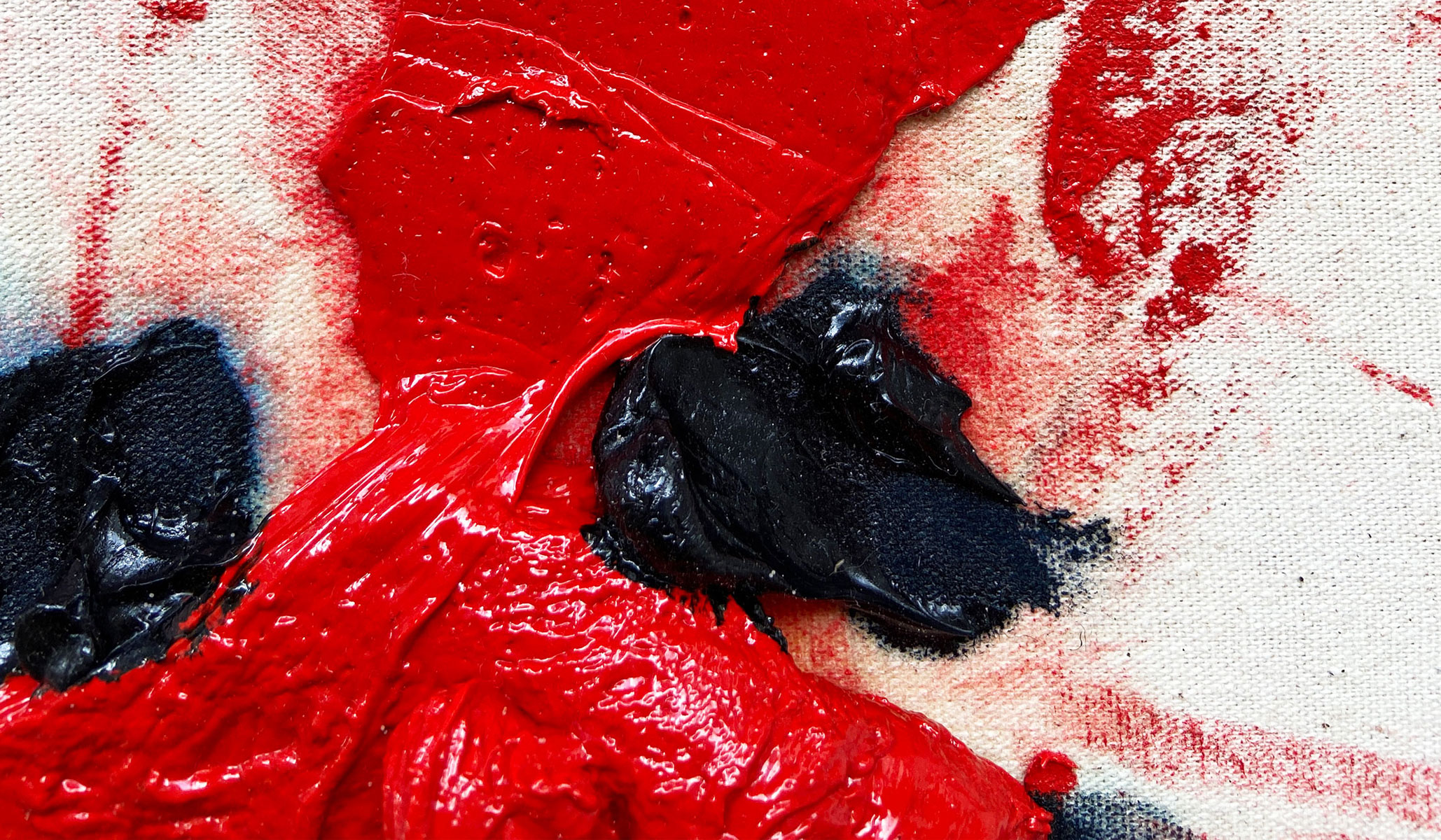 Douglas Diaz is an American born artist currently based in Bali, Indonesia. Working primarily across painting, drawing and printmaking, his practice is rooted in an appreciation of zazen meditation and questions of the self in relationship to the impermanence of life.

(To view & purchase artworks from this series scroll to the end of this online exhibition page).

Finding himself stuck in Bali amidst the COVID19 pandemic, Diaz began to create a series of evocative paintings which have become a document of this unique moment in time. 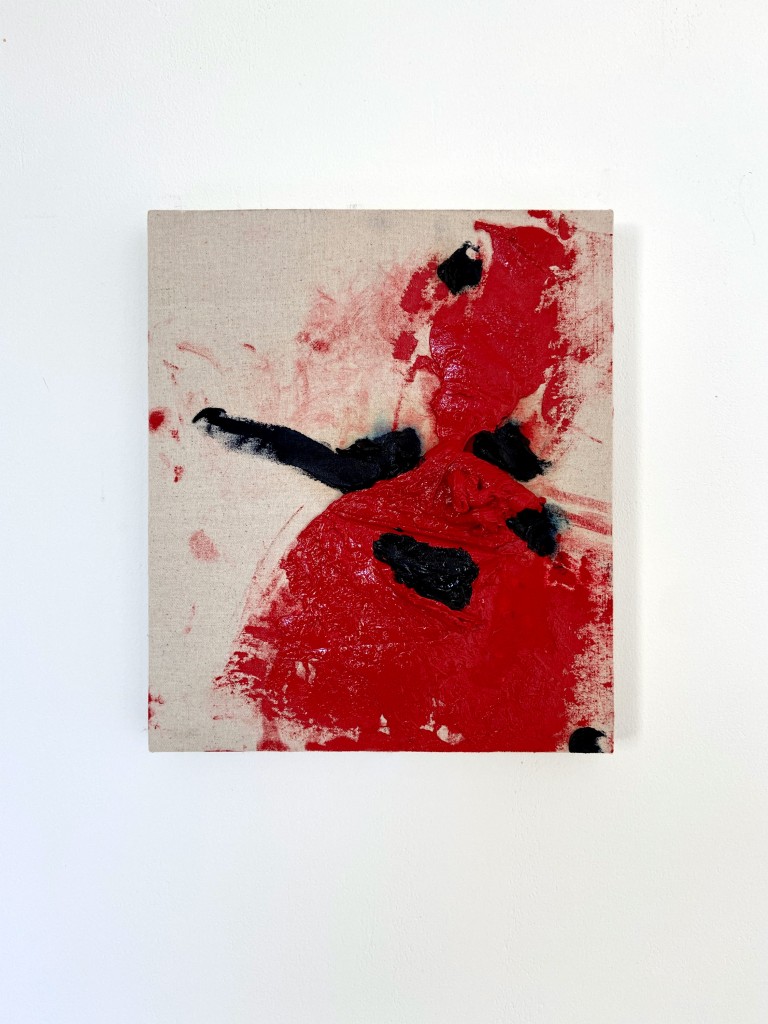 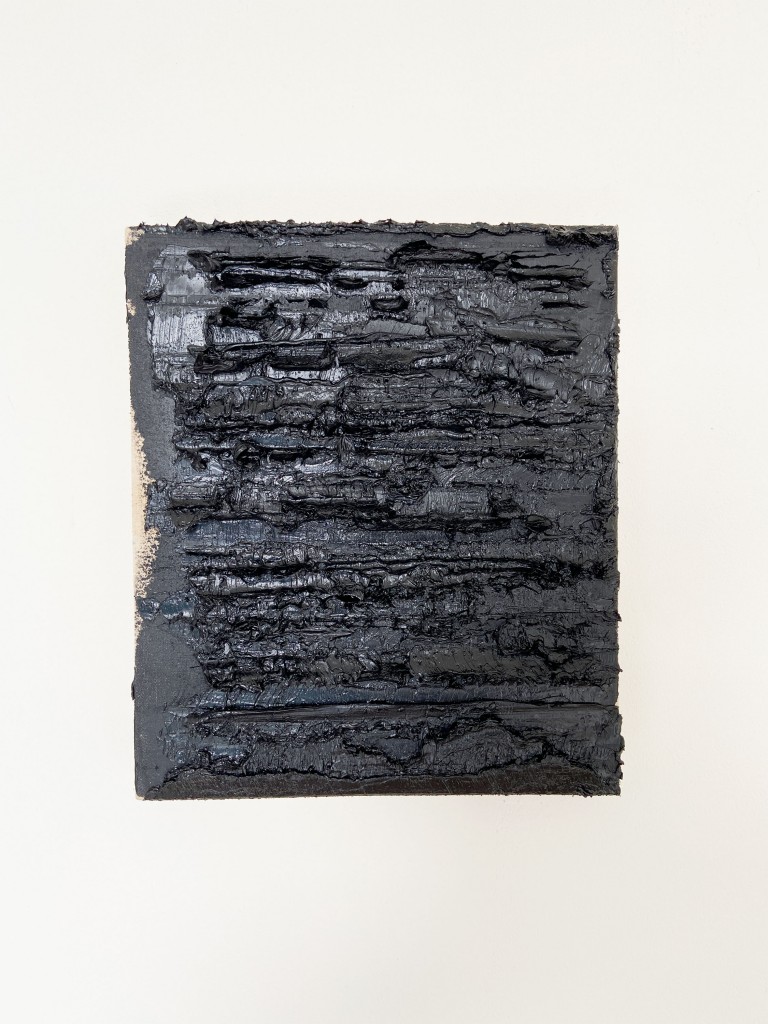 One of the strangest and most surreal side effects of the current COVID19 pandemic has been the way in which time has both slowed down and sped up. Many have dubbed it ‘The Great Pause’.

The pandemic hit and suddenly we were collectively forced to slam on the breaks, bringing the frenetic, fast paced world in which many of us exist to a surreal and abrupt halt. Time slowed down. Routines were broken. At first, it felt as though an impossible sequence of enormous calamities was felling us. In the space of days our world seemed to be turned upside down. Sentences we never could have imagined we would utter were suddenly being spoken. Concepts that were completely foreign to us were suddenly a scary new reality. Time seemed to be moving at lightening speed.

By late March 2020, the horrific bush fires of New Years Eve and the sweeping horrors of January felt as though they had happened in another lifetime. By late April, time had slowed down and days were crawling along in an endless blur.

Many people have been busier than ever, struggling to keep up with a changing world. We funnelled our energy into ‘adapting’, ‘pivoting’ and showing ‘resilience’. For some of us it has been a daily fight to keep businesses afloat and our sanity intact. For others time has slowed down to a crawl. Jobs have been lost and an unnerving and anxiety ridden boredom has hung in the air like an endless fog. Days stretched out endlessly.

We talk about how we are all in this together. But our experiences have been vastly different depending on our circumstances. Perhaps the only universal element of our collective experiences has been this strange new experience of time. The way in which it has sped up, with the year rushing past at warp speed, a calamitous blur of headlines and horror. The way it has simultaneously slowed down, our worlds shrinking and time spooling out in front of us in long stretches in a way many of us have not experienced since languorous childhoods.

In making these two new bodies of work during the early months of the pandemic, Douglas Diaz has perfectly captured these experiences of time. Using it as a tool and a medium, Douglas has created a series of ‘Untitled’ works made by slowly and gradually adding a new layer of oil paint to a stretched linen substrate, every day until the tube of paint gradually ran out. On average these works took 45 days to create. Slowly, slowly, slowly. A process in stark and direct contrast to Douglas’ practice prior to the pandemic – when he was known for his meditative but spontaneous and gestural paintings and drawings – all typically made in one sitting. Capturing the endless stretching days that lay before him as he waits out the pandemic in Bali (where he is now unexpectedly living), Diaz’s ‘Untitled’ series is predicated on the slow march of time.

Showing alongside these works is another series of paintings titled ‘UNTIL THE END’. Again, these new works offer a portrait of a brief moment in time. They are a snapshot of a moment in which paint was squeezed from the tube and impulsively and emphatically brought to life through a series of rapid and unexpected gestures.

Seen together, these two contrasting series of works capture an experience of the many ways in which time can be felt. Despite all logic, despite what the clock tells us, despite the forward marching of the calendar, we realise that time is fluid and full of contradictions: it is unrelenting and reliable and yet can feel as slippery as quicksilver. 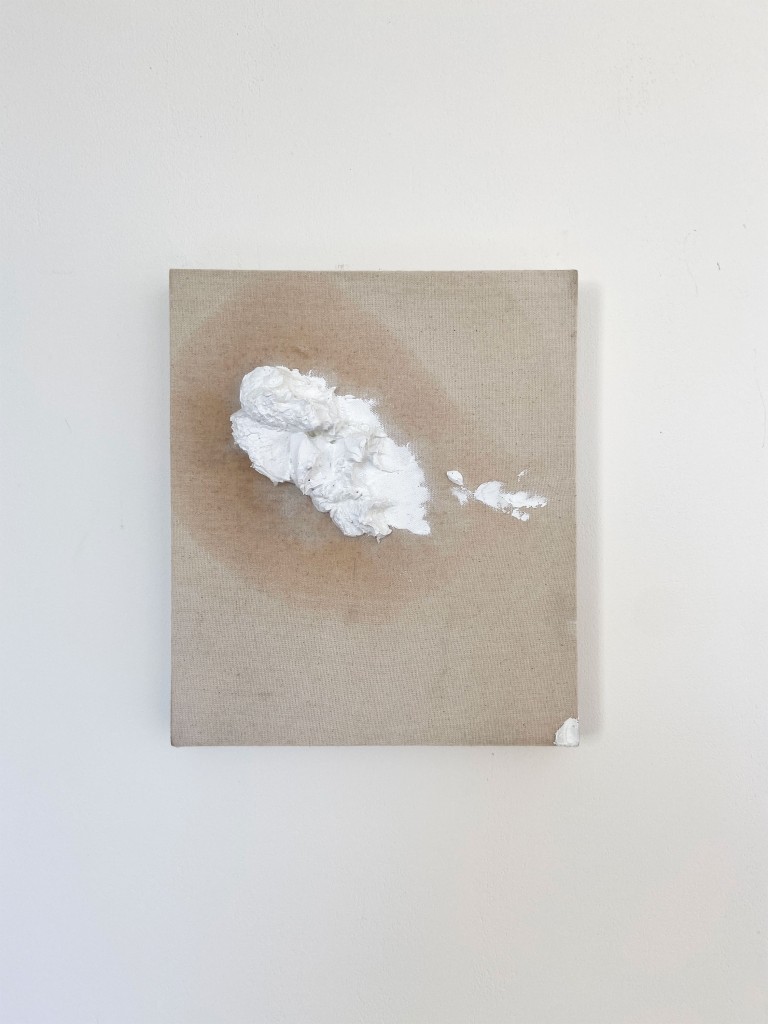 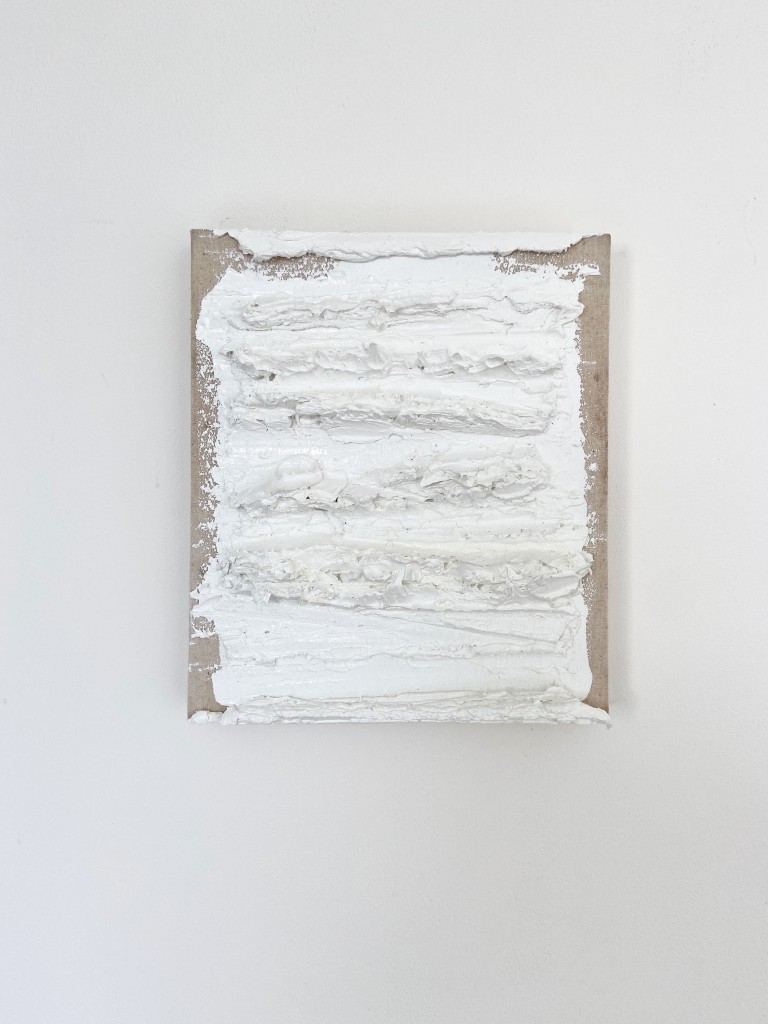 “Starting with four canvases each measuring 30 x 30 cm, I decided to apply one layer of oil paint each day. Each painting has a simple set of rules that govern how the oil paint is applied, making each painting unique. What they all have in common is that they receive one layer of paint per day until the paint runs out. Therefore the painting is not “finished” until the designated paint runs out.

These paintings are all UNTITLED to help distinguish them from my other concurrent body of work. These UNTITLED paintings aren’t inspired by my emotions or feelings the way the other work is. Yet the paintings themselves are very meditative in the act of repetition, acceptance, letting go and surrendering to the process.

Watching the evolution of the paintings, it was fascinating to see how they changed and evolved. Through this experience, I have gained a further appreciation for process. To sit patiently through layers and days until the painting is finished is a big departure from my typical process. Specially as my practice normally involves the creation of one artwork per day, as seen in my UNTIL THE END series which I made at the same time.

As part of my UNTIL THE END series, I have been working on individual paintings. These came about because some of the oil tubes had harden to the point where I couldn’t squeeze them out. Using these tubes meant that I needed to grab the paint with my hands and apply it directly onto the canvas. This experimental action would eventually influence the development of my gestures and the desire to make the paint more sculptural and three dimensional.

Eventually I started to make these with tubes of paint that were perfectly normal, but the process still involved using my hands to apply the paint directly on to the canvas. These new UNTIL THE END works are therefore much more expressive and  are defined by a sense of speed and immediacy which mirrors the bodies of work I have been creating and become known for over the last few years.” 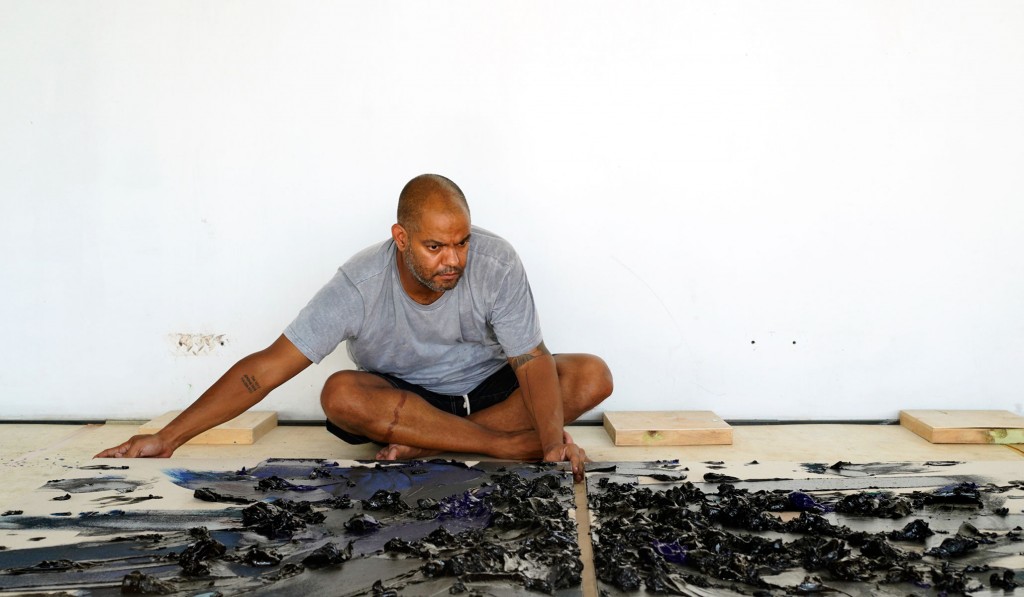 Artist Biography
.
Douglas Diaz (b. 1972) is a Brooklyn, New York born artist. His work explores questions of his own humanity, challenging preconceptions and thoughts, embracing fears and the darkness that lies deep within the unconscious in an attempt to gain spiritual equanimity.
.
His work has been exhibited in solo and group shows since 2015 across Australia, Indonesia, Japan, Singapore, Thailand and the United States. In 2017, Douglas had his first solo museum exhibition titled SHUKKE  at Art 1 Museum, Indonesia. His work is collected privately and publicly in 21 different countries.
All prices are in Australian dollars and inclusive of GST. Information is correct at the time of publication. Prices subject to change without notice.
Douglas Diaz