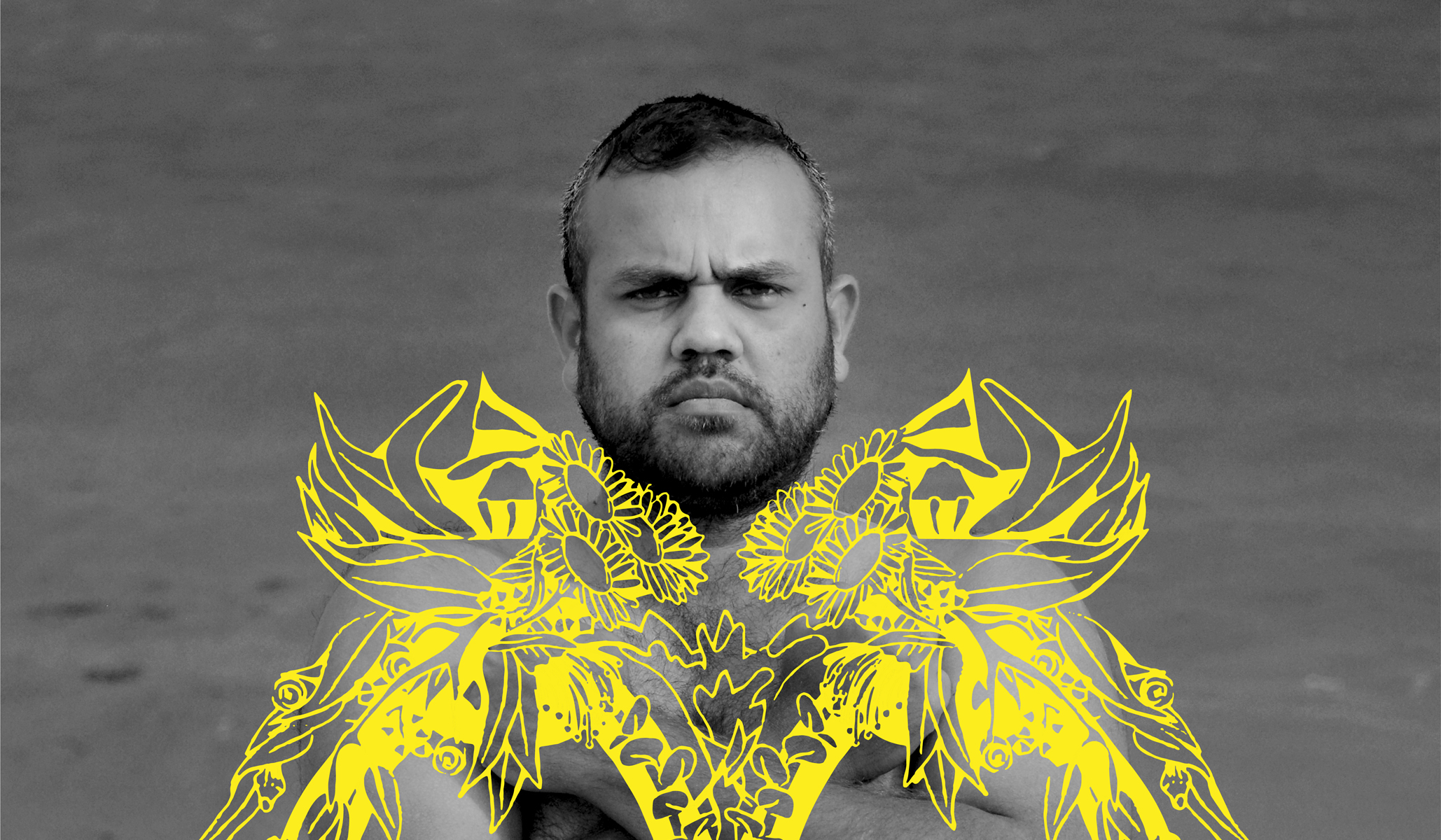 Dennis Golding is a Kamilaroi/Gamilaraay artist from the north west of NSW, who was born and raised in Sydney. Having been awarded the 2020 NSW Visual Arts Emerging Fellowship (awarded by Artspace and Create NSW) Golding is fast establishing a reputation as a leading figure in the next generation of contemporary Australian artists. Working in a range of mixed media including painting, video, photography and installation, Golding critiques the social, political and cultural representations of race and identity. His practice is drawn from his own experiences living in urban environments and through childhood memories. 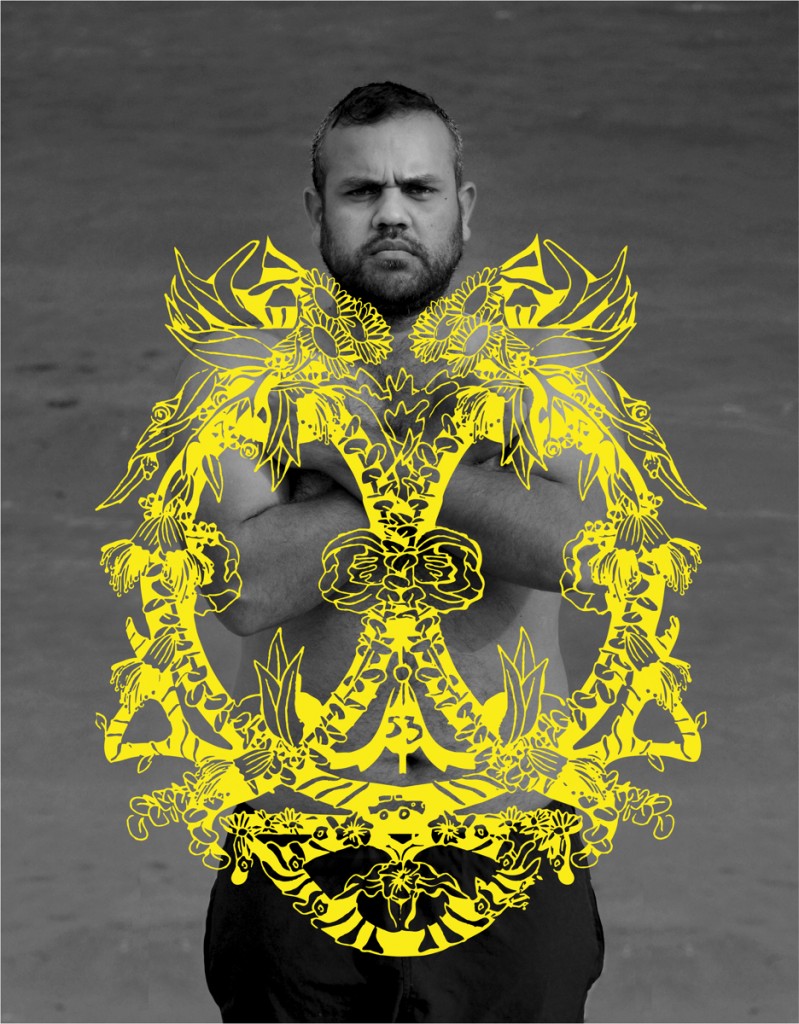 “This was something we touched everyday. Now its a memory and a reminder of our strength.”

In 2020, Dennis Golding made his mark on the Australian contemporary art world with Cast in cast out – a series of sculptures and photographs which reflect upon the artist’s childhood memories of growing up in and moving from terrace to terrace in the inner-city suburb of Redfern, Sydney – often referred to as ‘The Block’. Golding has described this powerful debut body of work as “aiming to understand the practices of colonial occupation and western structures of land ownership by investigating the manufacture, allocation and design of Victorian cast iron panels, which were an iconic architectural feature of the homes in which I once lived. In creating these works I reproduced these original lacework panels by casting them in epoxy resin and iron oxides. These reproductions become fragments of memories accumulated and broken through time as an attempt to decolonise them while the fence motif symbolises a threshold that keeps people in but also keeps people out. In the photographic self-portrait that ties together this series, I dismantle the wrought iron panel in the form of a shield, embedding the object with power and memory as I simultaneously challenge the colonial gaze. This work provokes the histories and experiences of my family as well as many other Aboriginal families who lived in terrace homes in the block. ‘Cast in cast out’ acknowledges Aboriginal people’s connection to community and land, as well as the stories of dispossession and removal.”

The series went on to achieve significant critical acclaim, winning Golding the 2020 NSW Visual Arts Emerging Fellowship, with the (no doubt soon to be iconic) central photographic work from this series also being acquired for the permanent collection of Sydney Living Museums.

Continuing on from this series, Dennis Golding has spent much of 2021 working collaboratively with various family members to create a new body of work titled Tracing Places. A series of three photographic portraits featuring the artist, his younger brother and his cousin, each image has been overlaid with a digital drawing of a shield-like motif – again inspired by the original Victorian wrought iron panels that defined their families’ homes in Redfern. Taking things one step further though, Dennis, his younger brother Jack Cook and cousin Brendan Carr, have each reimagined and designed their own shield – drawing on memories of their childhood surroundings and experiences, to create templates for future shields which incorporate their own personal narratives, lived experiences and family histories.

In a continued effort to decolonise the Victorian architecture which defined Redfern, a suburb known as a stronghold of Indigenous culture in the inner-city urban landscape of Sydney, Golding and his collaborators transform and reclaim a material imbued with a deeply colonial history to create a contemporary object which is uniquely Indigenous, deeply personal and profoundly empowering. Captured here as blueprints for series of custom-made shields which Golding intends to create in the near future, each portrait depicts the shield’s would-be wearer standing proud and resolute. Behind them we see the ocean waters of Yarra Bay in La Perouse – a suburb of Sydney which Dennis’ family now call home – having been gradually displaced as a direct result of the urban gentrification which has slowly transformed Redfern over the last 15-20 years. Standing there, with the waters of Botany Bay behind them, we are reminded once again of the history that has taken place on this land. Powerful, strong and resilient. Their stance says it all.

Unique to this new series of shield designs is the inclusion of a personal iconography and references to native flora. For Brendan Carr’s shield we see this in the inclusion of the flowering Eucalyptus gum – a tree found in abundance in Collarenebri – a town in North Western NSW on Gamilaraay land where their families’ originate. Translating to mean a ‘place of many flowers’, the inclusion of visual references to Collarenebri represents a nod to the fact that this shield captures a personal history of lived experiences both on and off country.

For Dennis Golding, the roses and grapes from his grandmother’s back garden in Redfern bring to the fore both his own childhood memories, and his grandmother and mother’s personal experiences, having moved from country NSW to Redfern and their efforts to create stability and a new home.

This ongoing generational displacement is further hinted at in Jack Cook’s shield, which references both Redfern (where he was born) and La Perouse – the Bidjigal land to which his father belongs and which he grew up on, surrounded by Gymea Lilies, Coastal Wattle, and Lilly Pilly trees.

Traditionally used as a colonial construct which helped to create domestic perimeters and enforce a European understanding of land ‘ownership’, the wrought iron lacework panel is here turned on its head, reminding us of the (at times ongoing) history of displacement which has taken place on these sites.

Subtly integrated into all three shields are the house numbers of the terraces in Eveleigh Street Redfern that provoked the strongest memories and emotions for each individual. Scattered throughout are further reminders of personal narratives, from the yellow commodore with a bullet hole in it that sat outside number 53 Eveleigh Street, to the inclusion of an NRL football.

Depicted in the recognisable neon yellow of Australian road signs and the caution tape used to rope off crime scenes, these shields remind us of the need to proceed with caution when thinking about the land we are walking on. Directly challenging the concept of Terra Nullius, Golding’s works remind us that this land has always been occupied and of the need to proceed with more awareness and respect. 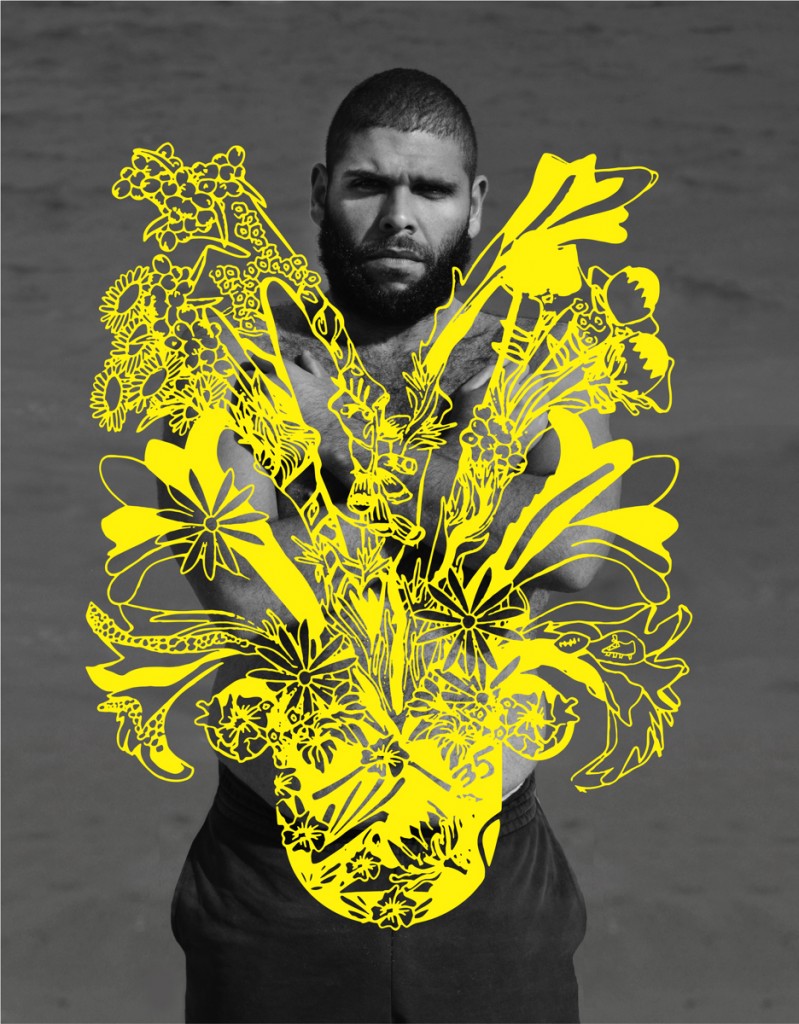 “I feel strong in this photograph because I’m on my Country. Bidjigal Country.”

Dennis Golding was surrounded by art from his urban upbringing living in an Aboriginal community in Redfern (often referred to as ’The Block’). As a young child, he often watched his mother and grandmother paint on large canvas and sheen fabrics which depicted Australian native plants and animals, cultural motifs and human figures. Before entering his formal art training, Golding worked as an administrative trainee at Nura Gili Indigenous Programs UNSW. He later developed his professional practice in art school through mentorships with leading curators, educators and artists. Golding graduated with a Bachelor of Fine Arts (Honours) at UNSW Art & Design in 2019 and now works independently as an artist and curator.

Through his artistic and curatorial practice, Golding aims to present powerful representations of contemporary Aboriginal cultural identity that inform narratives of history and lived experiences.

In 2020, Golding was the winner of the $30,000 NSW Visual Arts Emerging Fellowship (VAEF). Golding is the first Aboriginal artist to win in the award’s more than 100-year history. Awarded by Artspace Sydney and Create NSW, the VAEF is a key exhibition for profiling the dynamism and breadth of emerging contemporary artistic practice in New South Wales. The Fellowship enables a visual artist at the beginning of their career to undertake a self-directed program of professional development. Now in its 24th year at Artspace, it continues to define new generations of contemporary art practice for both artists and audiences.

Golding was awarded the VAEF for his powerful series of works titled Cast in cast out which reflect upon Golding’s childhood memories of growing up in urban environments in Sydney. Until the age of 13, Golding moved from terrace to terrace in the inner-city suburb of Redfern – often referred to as ‘The Block’. This work aims to understand the practices of colonial occupation and western structures of land ownership by investigating the manufacture, allocation and design of Victorian cast iron panels, which were an iconic architectural feature of the homes in which he once lived.

.
Golding reproduces the original lacework panels by casting them in epoxy resin and iron oxides. These reproductions become fragments of memories accumulated and broken through time as an attempt to decolonise them while the fence motif symbolises a threshold that keeps people in but also keeps people out. In a new photograph, the artist dismantles the panel in form of a shield, embedding the object with power and memory as he challenges the colonial gaze in a self-portrait. This work provokes the histories and experiences of Golding’s family as well as many other Aboriginal families who lived in terrace homes in the block. Cast in cast out acknowledges Aboriginal people’s connection to community and land, as well as the stories of dispossession and removal.

Dennis Golding is currently a finalist in the 2021 National Aboriginal and Torres Strait Islander Art Awards. He is also currently presenting a major exhibition at Carriageworks in Sydney. Curated by Kyra Kum-Sing and titled The Future is Here, the exhibition is the result of a collaboration between Dennis Golding and Aboriginal and Torres Strait Islander students from Alexandria Park Community School. The superhero capes exhibited in the show were created during a workshop in 2020, led by Golding who is an artist in residence at the school through Solid Ground. Students from Kindergarten to Year 12 designed their capes with iconography informed by their lived experiences and cultural identity.

As superheroes, Golding and his young collaborators are empowered and reminded of the strength of their culture in forming their identity and connection to Country. Individually and together, the capes critique social, political and cultural representations of contemporary First Nations experience. This series of capes were first presented earlier this year in the exhibition POWER at Blacktown Arts.

Dennis Golding’s work can also be seen as part of a feature article in the July-September 2021 issue of Art Collector Magazine. He is currently working towards a major solo exhibition at Artereal Gallery in 2022. 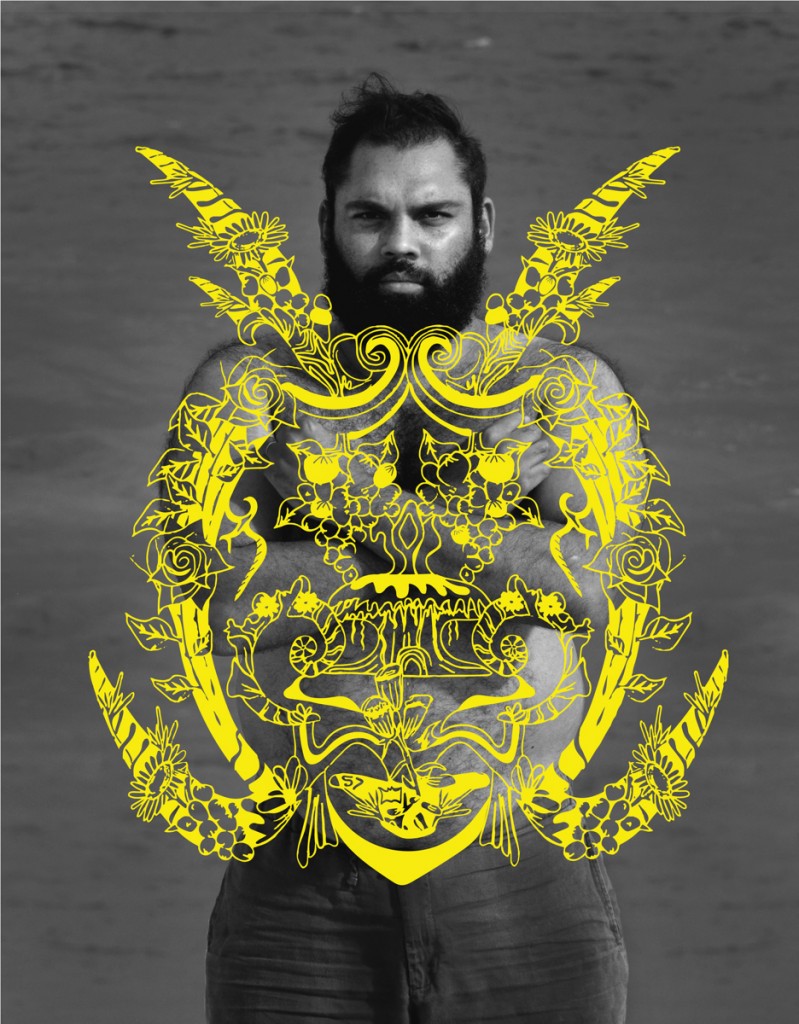 View all of the artworks in this online exhibition below. Please click on artwork to view in full screen mode.

All prices are in Australian dollars and inclusive of GST. Freight and shipping costs not included. Please contact the gallery for assistance with framing and shipping. Prices are correct at the time of publication but may be subject to change without notice. For sales enquiries email: info@artereal.com.au