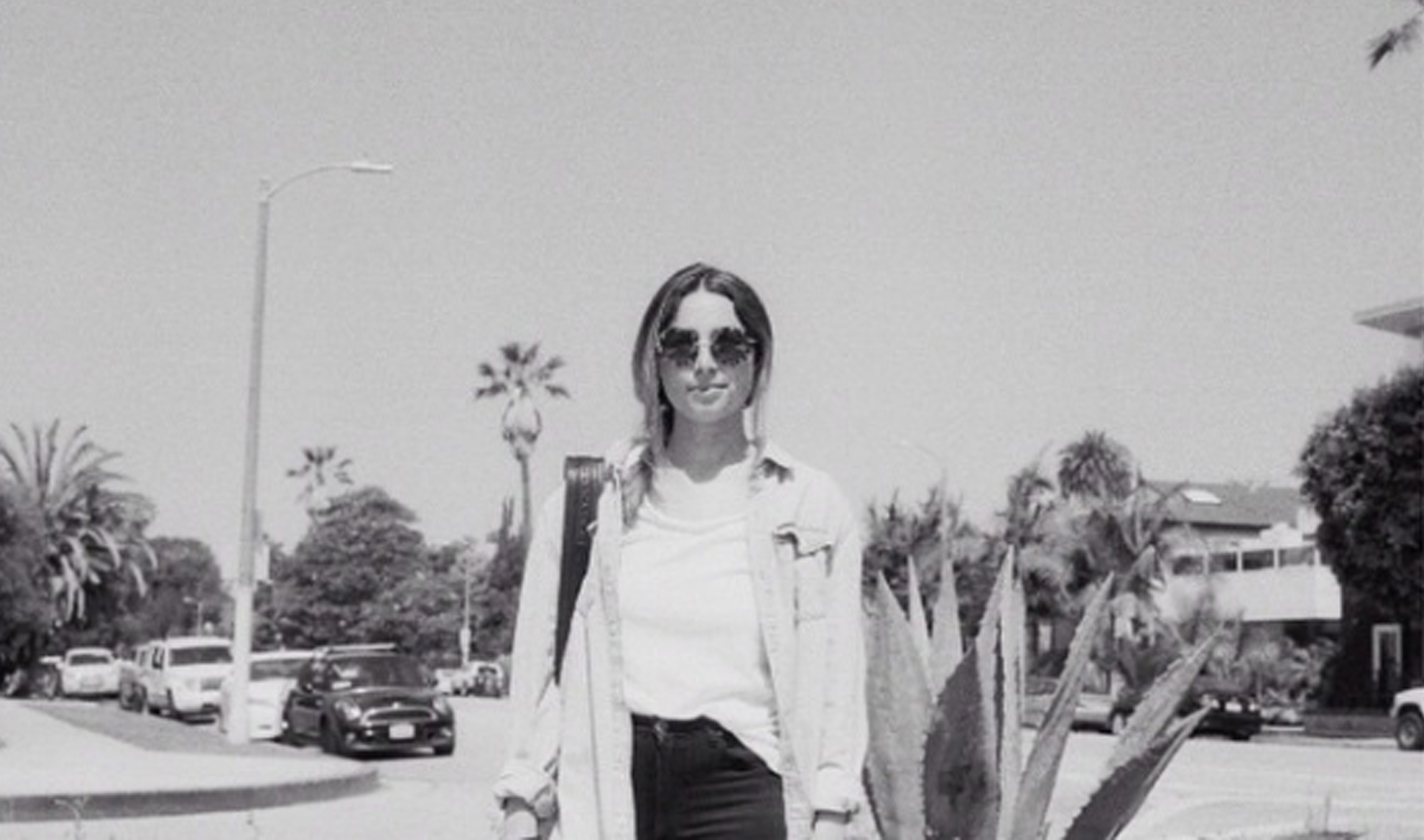 Where are you from and where do you call home?

I grew up on the Gold Coast and I am currently living in LA but I call Australia home.

What themes or motifs are you consistently drawn to?

The Terrestrial and Celestial. Celestial motifs include everything to do with stars: stardust, star signs and the sun, but also the other things such as the Moon, Mars and Venus. Things on earth I am attracted to include the sea, trees, flowers, rainbows, mirages and of course houses. What all these places have in common is that they are places of the imagination. I also like the way these places and celestial signs are used within architecture. I want to reawaken the experience of the imagination for one to drift between the architectural spaces, the natural sublime and the universe outside of us but also within ourselves.

I never planned to be an artist, but throughout school and university I just kept moving closer and closer towards it because it was the most interesting, easiest and energizing thing for me to do. 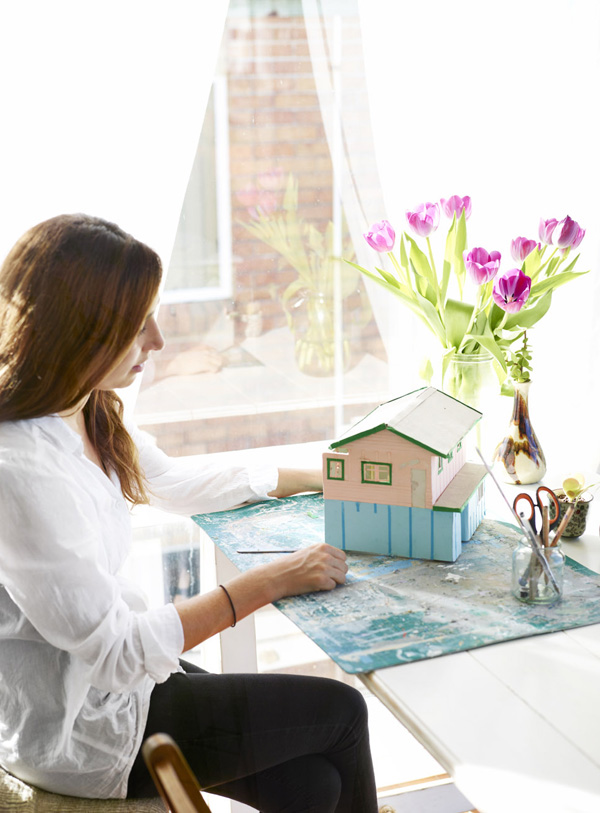 Anna Carey in the studio. Photo by Toby Scott, courtesy of The Design Files.

You moved to Los Angeles from Australia a few years ago, how has this move influenced your new work?

I think since moving to Los Angeles I am more interested in art and architecture on a global scale rather than before where I was more interested in place. On the Gold Coast I was interested in my memories and the culture of the place because it is such a new city constantly trying to reinvent and define itself. There are so many stereotypes places upon it and my work was a way to explore the place and reject shallow stereotypes placed on it by showing my own personal experience of place, which is also common to many other people that live there.

Since moving to Los Angeles I think more about the connection between the city of LA and the Gold Coast and other places in the world. This can be seen in the Stardust works and my new fascination with Google maps. Most of all it can be seen in the architecture I am creating now, it is based on lived experience but has also an international style of global dream memory. 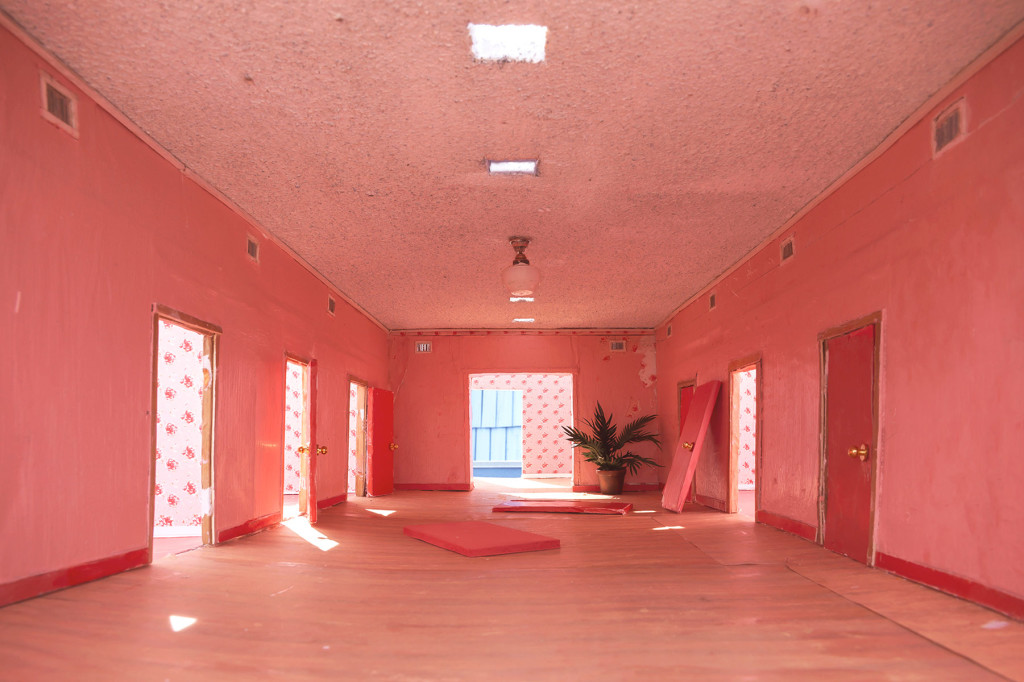 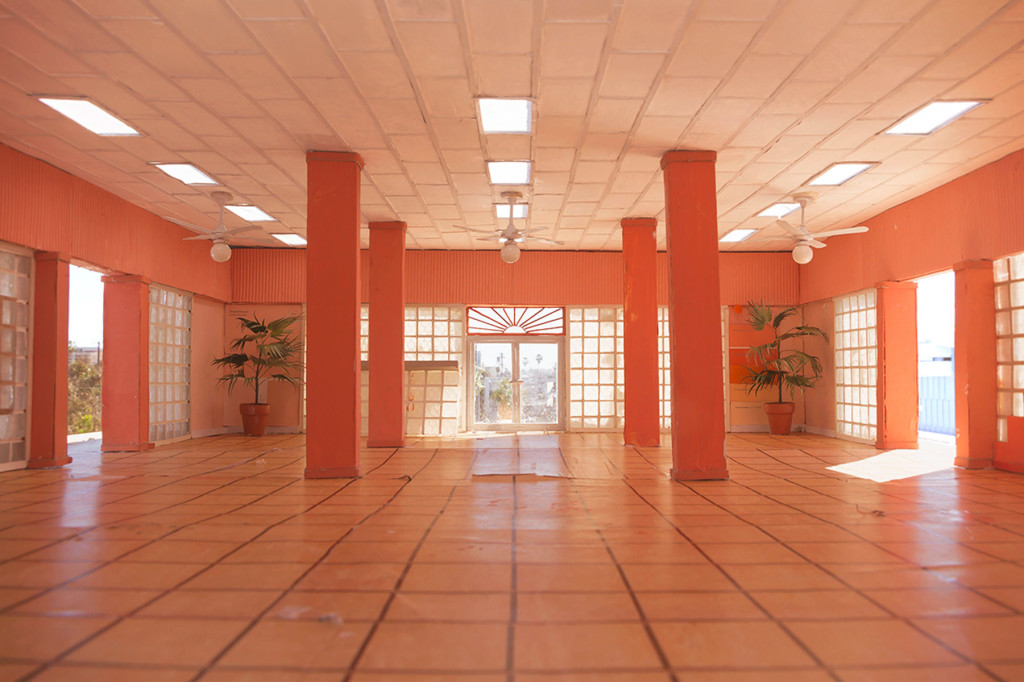 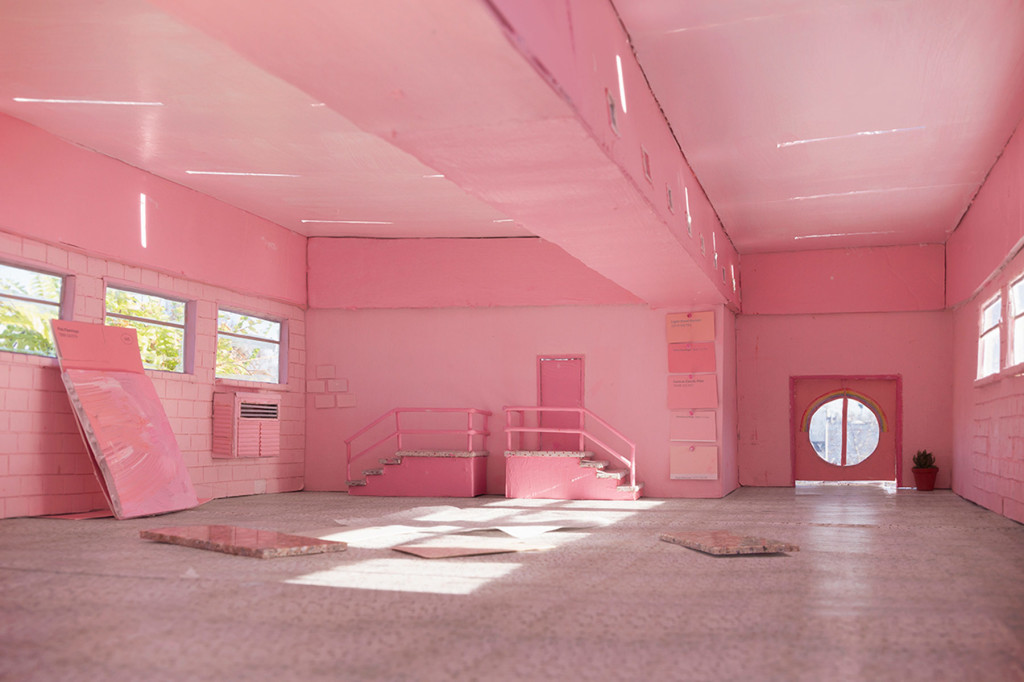 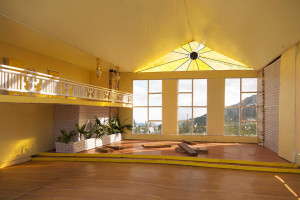 Describe a typical day in the studio for you?

I wake up and always get out of the house and move to get the energy flowing, usually a beach walk or some yoga. Once I have done that I am ready for the day and I will have breakfast. Then I will start dreaming up some ideas. The morning is my most creative time I daydream, plan places, draw and write all my new ideas down. Some days are different though and the morning involves more labour, like cutting and painting. I have a lunch break out in the sun (if there is any). Then back to the studio. The afternoon is more about organizing and planning such as measuring, cutting, ordering materials, taking photos and editing photos. I also have a break at around 3:30. I never used to take breaks and felt guilty doing so, but I realized I am more productive when I do. It’s like a meditation/ siesta for 20 minutes where I close my eyes and just breathe. It is revitalizing and gives me energy to finish my jobs for the day and wrap everything up. At the end of the day I will go for a walk and try and catch the sunset because I get major cabin fever. Then it’s dinner and computer time for emails and other things. When I am really busy and I have a show coming up I usually get back to work after dinner but not so much back in the studio it is more just on the computer choosing and editing photos. 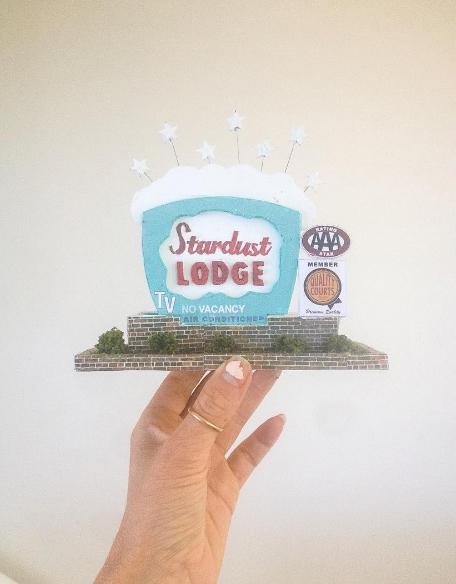 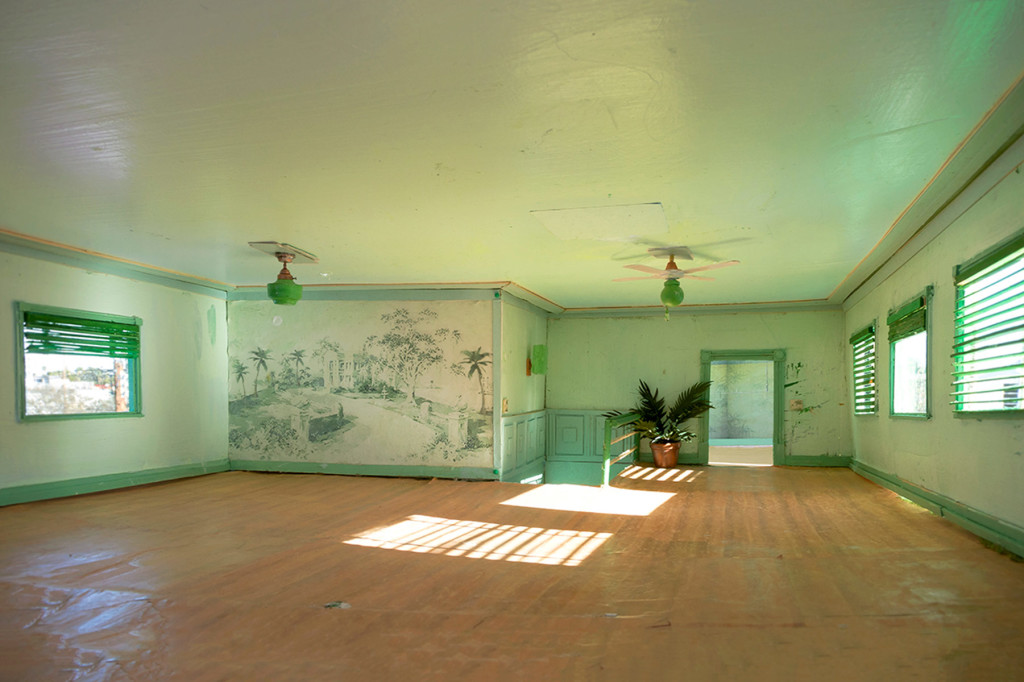 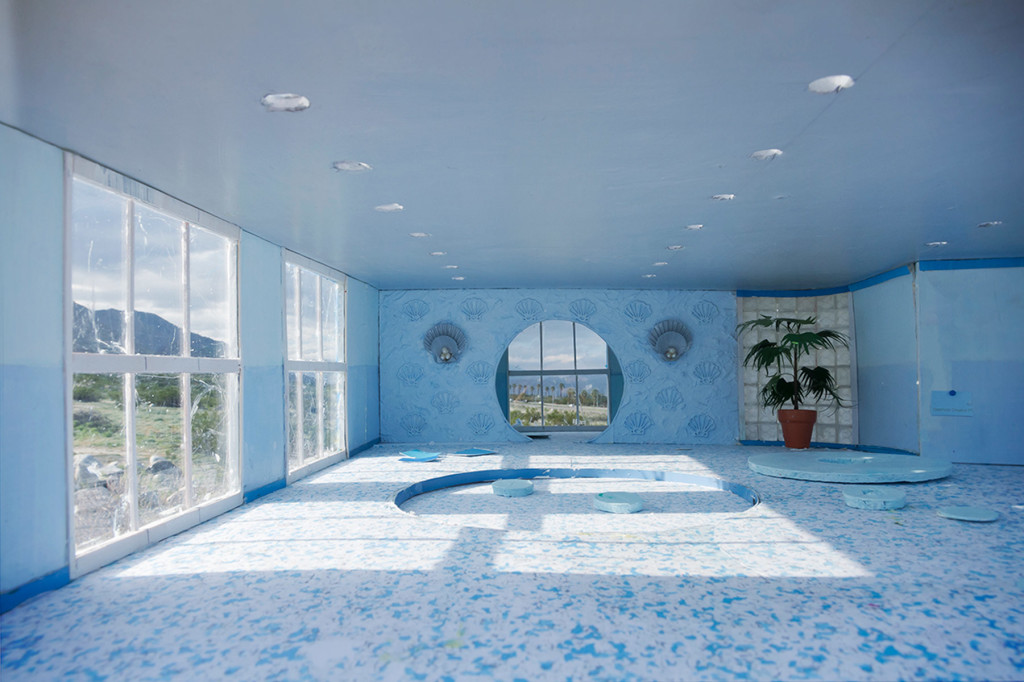 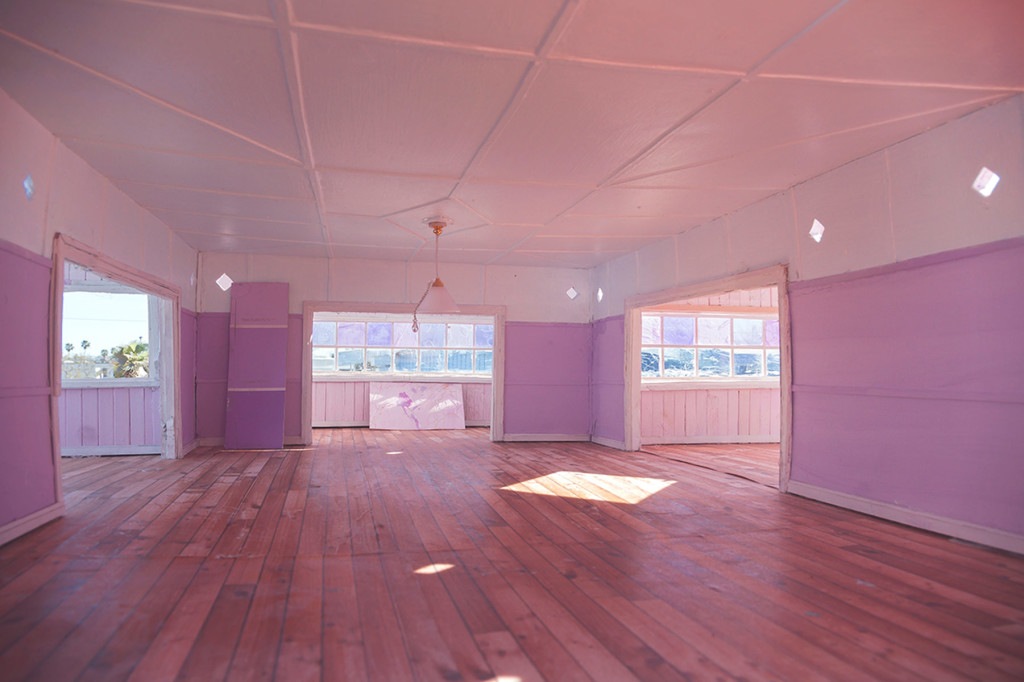 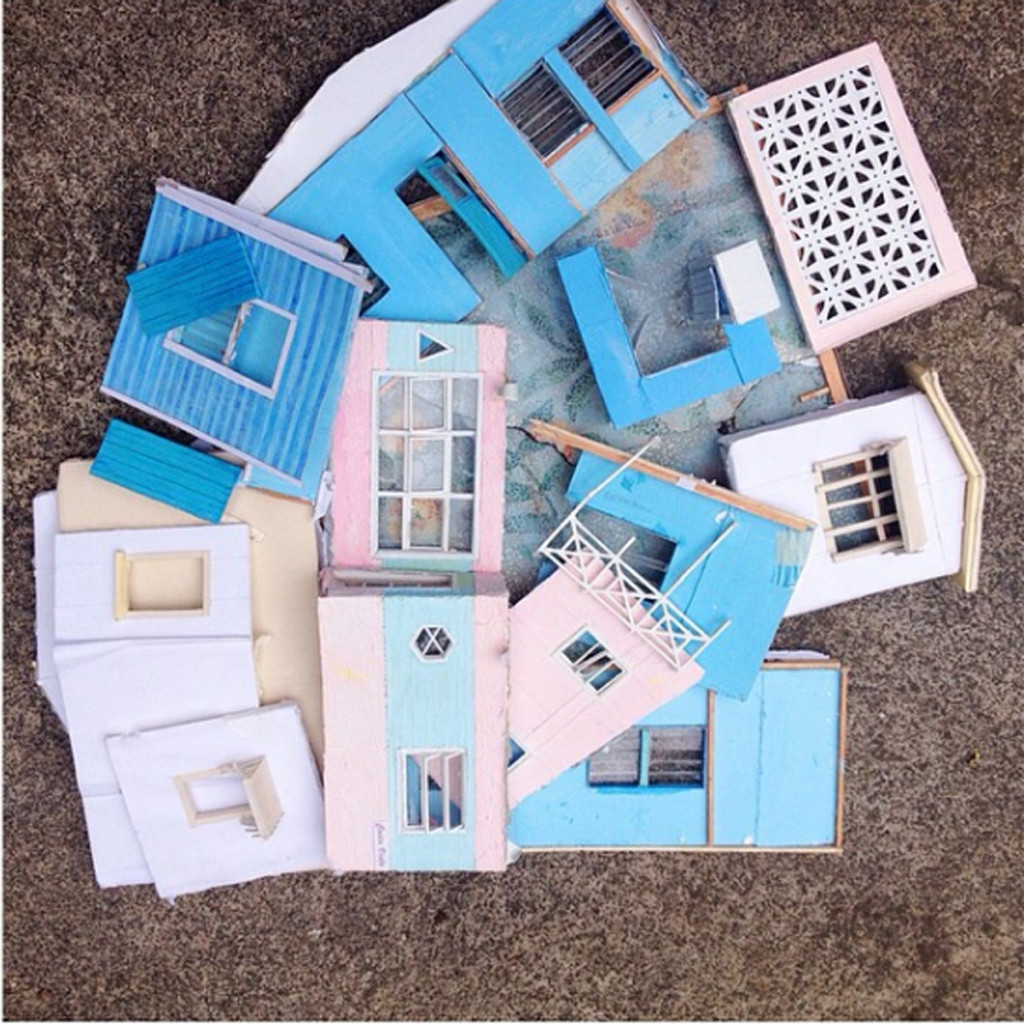 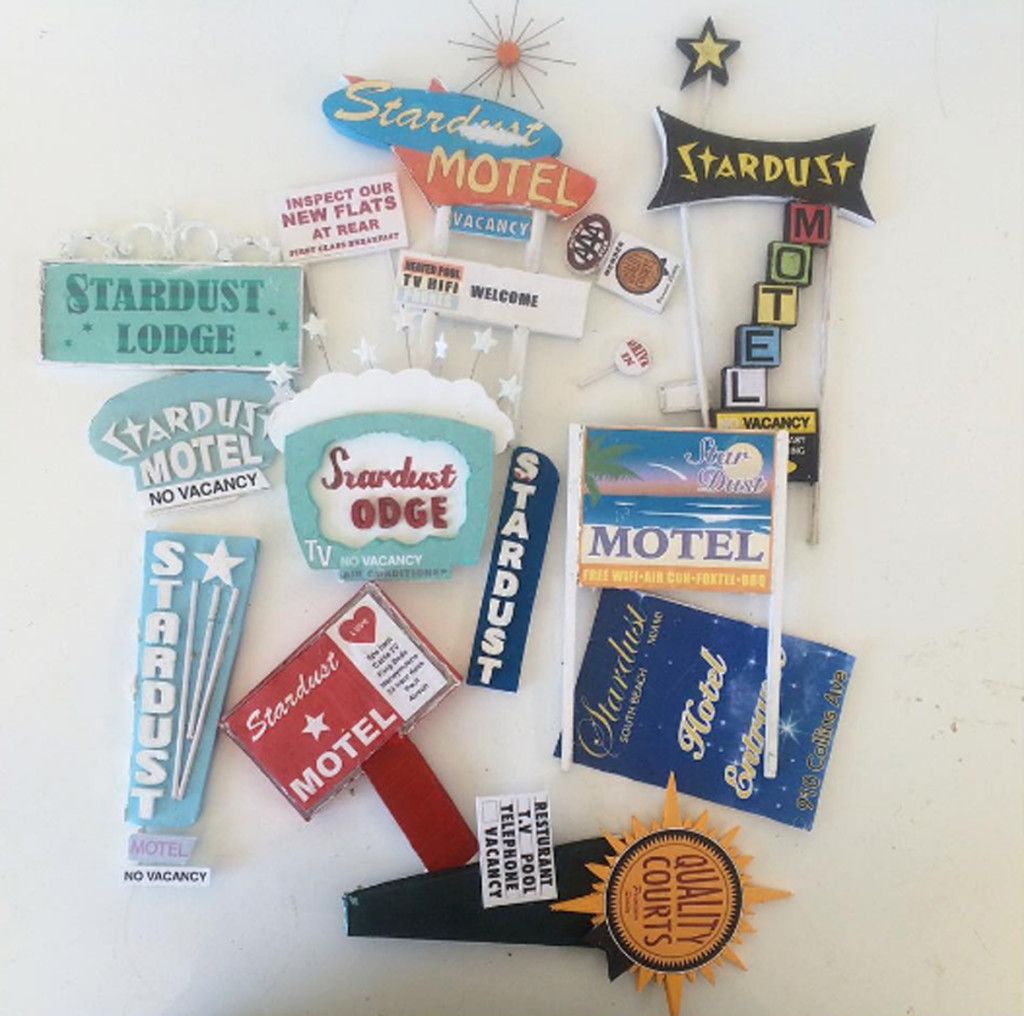 What necessities do you require when making your art?

Good food, tea and cocoa, sleep, sun, and a body of water close by is a bonus. I guess that they are all pretty simple life necessities.

Is there any artwork on display in your home or studio?

Yes, I have works of mine over here in LA from shows I have had here. Some are up on the walls but I don’t have enough wall space, so they are pilled up around the house in my bedroom, the lounge room, the spare room and the studio. I also have works of other artist friends on the walls such as Emma Lindsay, Donna Marcus, Luke Dobron and the work of Sebastian Moody.

Are there any aspects of your process that are left to chance?

I don’t use chance like some artists who rely on it as a tool or process. My work is very pictorial and planned, however I do make mistakes.

Is there an artwork that you can think of where a “mistake” determined the work?

Yes a lot of the works are made up of mistakes. The models in particular are like a patchwork of messy mistakes. Mistakes also happen when taking photographs. The shadows on the Stardust works were a mistake. Also the outside natural landscapes that are captured through the interior windows were not planned. My plan was to photograph the works in a studio, but I was testing photographing the model outdoors and it actually looked better. Also I remember when I was photographing Daydream the letter Y fell off and then I drew it in afterwards, on top of the photograph, which I felt really made the work.

Where do you find your day-to-day inspiration?

A variety of different places from walking the streets to the beach, films, exhibitions, people. But I am most inspired through stillness, being present and drifting between reality and daydreams. I really have to schedule in time for that.

Is there something people would be surprised to learn about you?

Everyone is always surprised that I don’t really drink alcohol. I think its funny because to me it’s not such a big deal.

What’s next for you?

I am still trying to figure that out, I have been traveling and just finished a body of work so I am still digesting that and the Art Fairs in Europe. I have a couple of ideas but haven’t settled on one yet. I just need to work through it.

What would you like people to experience when they view your artworks? 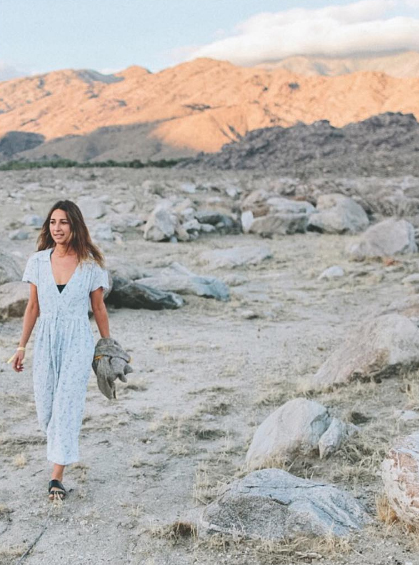