Stevie Fieldsend’s visceral sculptures are steeped and congealed in the juice and sap of the life force, They are about blood, and ink and the rituals and marks of belonging – and of not belonging. Of both wearing the marks of heritage; and making your own mark.Of family and of desire…

The totemic sculptures are a fusion of radiant light, the transparency of molten indigo glass and of ink dark shadows, of the depths and darkness of dense charred wood. The Umbra sculptures signify the potent and personal transformation that comes with Malu, the ritual Samoan women’s tattoo covering the knees to the upper thighs; a status recently accorded the artist, Stevie Fieldsend in acknowledgement of her Samoan heritage. The Malu tattoo with its diamond shaped motifs was originally a rite for women before they married; it translates as ‘protection’, ‘to shelter’, ‘to be shaded. Receiving the Malu is a shared experience within the family.

The artist endorses this: “I think for me that going through the ritual of ‘Malu’ was more about protection of a sacred site – my body, and a spiritual connection to my ancestral lineage; the idea that we are born with this ancestral imprint – it’s in our bones – that emerges to the surface when the time is right. Belonging is also a big part of it, which feeds into identity, but I did not get the ‘Malu’ for identity reasons as I already have a strong sense of identity! But certainly – it has enriched my sense of self and given me a wider perspective.

The ritual of ‘Malu’ has inaugurated me into my Samoan identity – it has allowed me to enter into a new and old world – one that I inherited but was not familiar with. It connected me not just with my ancestral lineage and Samoan family but with both sides of family and with everybody in my life in a positive and harmonious sense – it has united me in a worldly sense – ‘Va’.” In a feminist context it accords recognition and status to the fortitude and strength of women, a premise implicit in all of the Umbra works. 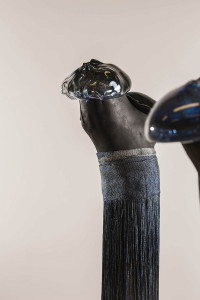 Tatau (Samoan for tattoo) is applied by a ‘tufuga’ holding high rank in Samoan society and literally translates as ‘specially skilled to put pictures into skin’. It is a painful endurance ordeal over several days with the tattoo applied with hand made multi-toothed comb-like tools. The recipient’s skin is spread taut by assistants, while an ‘au’ a sharp toothed instrument is hit with a mallet, applying deeply imbedded lines that penetrate all skin layers and then spread and join as eight neat symmetrical lines banded at each end.

Traditionally Samoan tattoo ink was made from the burned residue of lama nut mixed with water that is acknowledged in the charred inky surface of the sentinel sculpture, Malu Orare. Its bifurcated trunk and molten glass breast forms crowning the imposing shaft signifies the two sisters, Siamese twins, of the ancestor story of the introduction of body art into Samoa and also the dual nature of the genesis of the Malu tattoo, from men’s to women’s marks.

In the contemporary context, the forked forms of the tree trunks of the family of sculptures, Umbra #1-9, call to mind upended thighs, traditionally the site for Malu on a woman’s body. The upside down posture is symbolic of the cathartic and transformative process of the Malu rite. 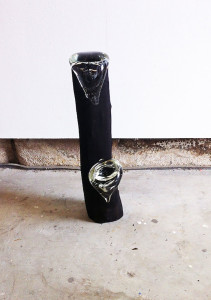 The sensual and sensuous Umbra works are surrogates for the female body, physically and psychologically and indicative of birth and rebirth and homage to the fortitude of women and female potency. They are also evocative of headdresses that are associated with celebration of Malu. In Fieldsend’s sculptures the inky cascading fringe is redolent of both the long hair and grass skirts of Samoan women, of goddess figures, yet also the drape of couture; of the dark depths and wind and rippling water across which the ancestor sisters travelled to bring tatua to Samoa; and of emotional tangling and untangling.

The Malu rite and this body of work marks a significant and cathartic life event for the bi-racial and bi-cultural artist, signalling entry into Samoan society and bringing a sense of belonging and a measure of expiation and peace after a life-long fraught and estranged relationship with her late Samoan father. The fringe is also suggestive of the hidden and nondisclosure protocols from missionary influences; a restraint that the artist acknowledges but no longer heeds.The Umbra works are a paean to the process of ritual for dealing with the transitional stages in life, with sex, birth and death and as a way of dealing with trauma, grief, even desire.

Dance is implicit in both the making and the form and installation of these works. The twist of the artist’s body as she hefts and wrestles the logs, the dance of flame from the blowtorch licking and charring, the rhythm and sway in front of the kiln as the molten glass is wielded and shaped at the end of a rod, A considered choreography also informs and animates the angle and line of each Umbra piece, as it does the layout and interaction of the group in the gallery space.

Stevie Fieldsend cites choreographer and modern dance icon Pina Bausch as an inspirational strong, committed and creative woman, and was greatly moved by her viewing of the film, Pina by Vim Wenders. The sequences of the film encompass, ‘theatre’, ‘love’, ‘struggle’, ‘longing’, ‘joy’, ‘despair’, ‘beauty’, ‘strength’, ‘art’; all elements that are fundamental to the concept and realization of Stevie Fieldsend’s Umbra works. She also cites as integral the Samoan choreographer, Lemi Ponifaso, founder and director of MAU, New Zealand’s internationally renowned contemporary dance theatre company and his ethos that “Art can point us to or remind us of our ability to transform triumphantly without violence and pain.”

Stevie Fieldsend, has taught and lectured at Sydney College of the Arts, University of Sydney where she recently completed a Master of Fine Arts after earlier studies and two years as artist-in–residence at The Jam Factory Craft and Design Centre in Adelaide. She has worked in glass design and production, and is now focusing on installation and sculpture.  Stevie Fieldsend has participated in solo and group exhibitions both in Australia and internationally and has won many awards including the 2012 Sculpture in the Vineyards Prize and in 2013 won the Rookwood Necropolis Sculpture Award and was a finalist in the Blake Prize and the Willoughby Sculpture Prize.