In conversation with Barry Keldoulis

Tully Arnot’s practice uses the debris and detritus of our contemporary existence, the manufactured bits and bobs that constantly surround us, as the material from which to create absurdist sculptures and installations that offer a wry critique of the way in which we interact with each other and with technology on a daily basis.

In the artist’s own words Trace Etc. “presents a suite of new works exploring different notions of trace – from residues, to transitional artefacts, to formaldelineationsof pathways.‘Trace Etc.’develops on my investigations into the blurring between digital reality and real life, and the tensions between CGI/Artificial Intelligence/robotics/etc., and more organic or natural elements.”

In an era fixated on and controlled by the internet and an ever-changing parade of the latest and greatest technologies, works such as Cursor document and capture perfectly the cyber-mediated mentality which we have come to adopt. Created with the aid of a small motor, a tiny, life sized plastic cut-out of the ubiquitous cursor symbol hovers and gently glides through the gallery space, cutting through the air at eye level and creating the illusion that the viewer is experiencing the exhibition through a computer screen – a mediated form of viewing which contemporary audiences are all too familiar with. 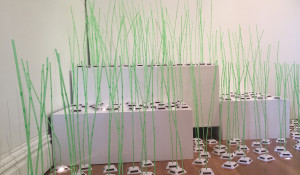 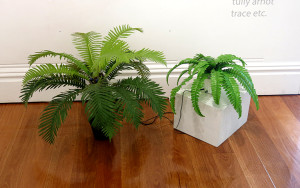 A key piece within the exhibition is Meadow (IRL), a large-scale kinetic installation that typifies Arnot’s ongoing fascination with works that integrate complex technologies with everyday materials or components. Created from solar-powered panels and fluro-green plastic straws pieced together to resemble individual blades of swaying grass, Meadow (IRL) is essentially an arte povera translation of the sort of computer generated imagery found in video games such as Zelda, where fields of tall vibrant grasses digitally blow in the wind. Offering up what is essentially a simulacrum of a simulacrum, Meadow (IRL) comments on the reality we now live in – a world in which many of us have more knowledge and experience of nature and the natural world via the internet, movies and video games we interact with than we do from real life experiences.

Other works such as Peace Lily (from the Nervous Plant series) question the level of interactivity which we have increasingly come to expect from the inanimate objects that surround us. At first a seemingly normal synthetic pot-plant, on closer inspection Peace Lily is revealed to be gently shivering or shaking. Animated via the use of subtly placed electronics, this typically inanimate object, an object created for the sole purpose of mimicking actual living organic matter, is suddenly animated and given the illusion of life and personality. 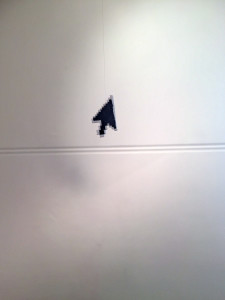 Also included in the exhibition is the video Thoughts of absence, absence of thought, which deconstructs a recent filmed artist interview (produced by Das Platforms) in which the artist is now seen but not heard. The resulting video work presents an almost silent series of disjointedbreaths, awkward silence, pauses and sighs. Directly referencing the new visual language of the internet, in this instance the phenomenon of the “supercut”, Arnot’s work examines the subtle traces which a steady stream of constantly evolving technology is leaving on the human psyche and the way in which we see and interact with the world.

By subtly addressing feelings of absence, longing and the uncanny, Arnot’s practice poetically interprets the intangible relationships we have with everyday items and the way these relationships feed back into our own capacity to interact meaningfully with one another. This merging of high and low thought in Tully Arnot’s practice exemplifies the technological nature of our increasingly connected but ultimately disconnected world.