Internationally known for their large installations exposing environmental issues, Ken + Julia Yonetani expand their practice in Time Lines to explore themes of memory, identity, and the interface between past and present.

Time Lines brings together two key works, Kristallnacht, an art performance video and Senkaku (sen o kaku): the tides of history, a large ­scale drawing. Both works trace lines of interconnection between time, place and acts of displacement to deliver a profound rumination on human relations in this era of globalisation, hyper-­?commodification, neo-­?nationalism, and the reinforcing of borders. These potent and thought provoking works are prescient in the context of the current refugee debates and border issues troubling the Asia-Pacific and regions world-wide. 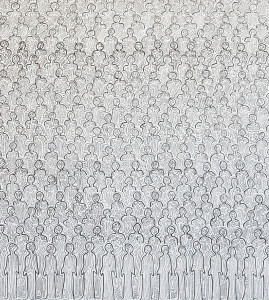 Kristallnacht, a performance video created during the artists’ residency in Berlin in 2013 has tens of thousands of chandelier crystals taken from original antique structures sourced in Berlin and placed in front of the deportation memorial on Putlitzebrucke (Putlitz Bridge), Moabit, a monument dedicated to the place where many Jews were deported from Berlin to concentration camps. At the site, the crystals placed by the artists become subject to the whims of passersby and garbage collectors who could sweep them up or carry them away at any time to be cherished or discarded. The fate of the dispossessed crystals of remembrance is placed in the hands of the bystander.

Senkaku, the Japanese name given to the islands currently being intensely disputed between Japan and China and Taiwan in the East China Sea, ironically also has the same pronunciation in Japanese as to draw a line (sen o kaku). Playing on the dual meaning of this term, Senkaku (sen o kaku): the tides of history, is composed from approximately three kilometres of continuous line. From afar, the lines make up nothing more than an interesting pattern, perhaps reminiscent of ocean waves. Close-up, the viewer comes to recognise a sea of people, separate and yet joined together, the same and yet each different – the tides of history. A poetic and yet poignant reflection on nationalism and identity, the potent work ponders on our obsession with drawing a line across borders and between peoples.

Ken + Julia Yonetani, have been collaborating on projects since 2009 when they exhibited as representatives of Australia at the Venice Biennale. Their recent significant installation, Crystal Palace: the great exhibition of the works of industry of all nuclear nations has just closed at the Singapore Biennale (2013). They have exhibited widely internationally and nationally in the United Kingdom, Finland and Germany as well as Australia in 2011-12 and undertaken artist residencies in Finland, Portugal, Germany, Japan and throughout Australia from 2011-14. They are currently artists-in-residence at Hazelhurst Regional Gallery, Sydney, producing works for The Last Supper, their installation recreating ‘The Last Supper ‘ dining table sculpted entirely from salt for exhibition 22 March-4 May 2014.