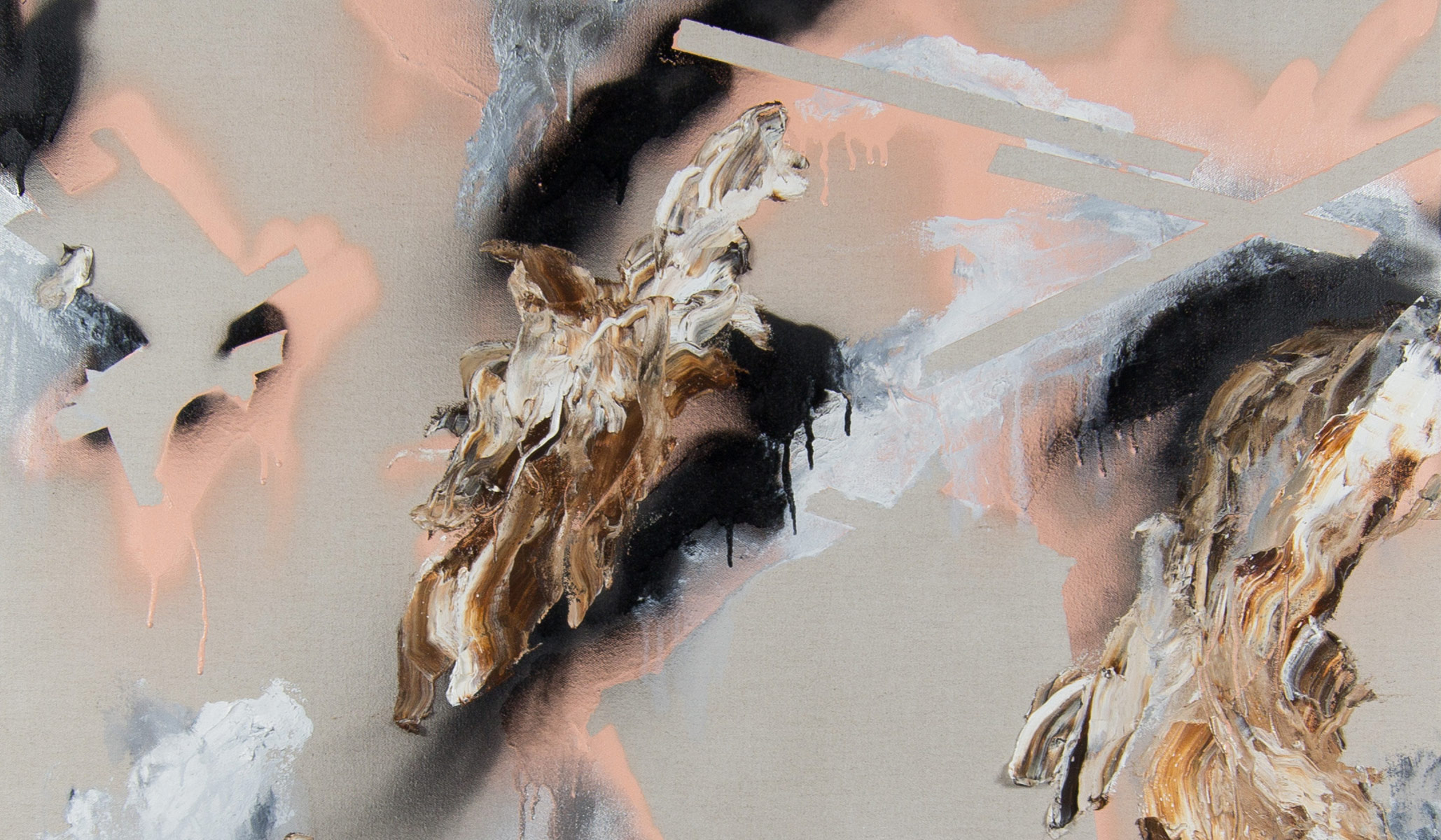 To coincide with Art Month Sydney, Sam Holt presents his latest body of work The distance between…

In a volatile political and economic climate of transition, in a time of lives lived via social media rather than ‘real life’ experiences, of edicts via Twitter and dissemination of so-called ‘fake news’, Sam Holt’s works are responses and painterly musings on the why and how and where of the divergent paths we take in life. At the heart of Sam Holt’s unscripted and free-flowing art is a way of manifesting the life force, of charting and expressing the challenges, the motivations and processes of everyday decision-making.

The distance between is a form of free-flowing visual conversation and performance manifested in paint. The installation of paintings is a collage; a visual diary of the artist’s maverick revelations, meanderings and speculations on present and future.

The artist works intuitively. The evolving concept and navigation of the ‘unknown’ is very much the driving force at the heart of his vital and emotive works and his practice. He creates paintings that are visceral manifestations of his psychological and ethical dilemmas; of the push-me-pull you of weighing up philosophies, values and sentiments and charting the teetering balance between the individual and society’s collective needs versus wants as he tussles with the daily quandary of juggling goals and reality, survival and aspirations implicated in life choices.

A significant theme that is imbedded and pervasive in The distance between is the mystique, the angst, the stop-start, the revelation of creation – as a concept, as process, as connection – be it construction, or a way of making a painting, or a decision.

Since his return from an art residency in Berlin in 2016 Sam Holt’s painting has developed an intensity and muscularity beyond the pared back gestural minimalist approach of former works. The palette has shifted from the pink, blue, green spectrum to a reduced, more neutral, not-quite-monochrome range of blacks, white, grey, sand and silver.

Where oil on raw unprimed linen has been Sam Holt’s characteristic medium, a range of mixed media – random materials including mirror and tape with accretions of oil, acrylic spray paint and viscous pours of metallic emulsion characterizes the works on both board and canvas for The distance between. Tape harnesses shards of mirror to the surface of a diptych while elsewhere it serves to mask fine lines for a grid or corridors through a cumulus terrain of paint masses to reveal a strip of pristine raw linen.

The titles that Sam Holt gives to his works are cryptic but carefully crafted. For the viewer any lingering sense of ambiguity is simultaneously heightened and repelled by titles like ‘Happy as a pig in mud, a pig stuck in the mud that is’ or ‘I couldn’t tell you what he does to be honest’. The artist acknowledges, ”… whilst at first they may seem laconically flippant, each title is in actuality full of double meanings and harbours an underlying commentary and observations on life, the art world and my own sense of identity as an Australian Artist. With their stream of consciousness-like structure, each title acts almost as a diary entry marking time and place.“

Sam Holt is a Sydney based early career artist. Following from study commenced at The National Art School, he completed a Bachelor of Visual Arts Degree at Sydney College of the Arts, University of Sydney in 2016, including an exchange residency at the Universität der Künste in Berlin. Works from his many solo and group exhibitions and commissions are held in Australian and international corporate and private collections including Artbank. His works are to be shown at Art Central Hong Kong in March 2017 concurrent with exhibition.

Join artist Sam Holt as he shares insights into his latest exhibition and his life in art.