Stevie Fieldsend’s totemic sculptures are powerful reflections on time and the cycles of life.

Forged in fire, her sculptures embody the alchemy of transformation; not only the phases of burning and regenerative re-growth as in nature, but the maelstrom of lifelong push-me-pull-you emotions of relationships and the fundamental themes of longing, vulnerability, love and death. Formed from the scorched trunks of Ironbark trees, torched and licked by flame with the pure, pristine fluid qualities of molten glass and tangle of fibres, they could be memorials fo the human condition. Stevie Fieldsend sees her practice as “a type of performance taking place close to the furnace, in the workshop and the studio, inside my body – a ritualistic branding that leaves more than a trace, more of a scarring.

However there is the possibility of transformation through this action as there is in all woundings. “In all rituals there is memorialisation and this is true of my work”. Stevie’s installations are potent homages to the primal and cathartic ritual of purging and release and shedding and healing. They are a further evolution of the series, Solve et coagula (dissolve and congeal), which she began in 2011 exploring the life force and sap of existence. Spatiality and the intrinsic relationship of a body or object within its environment underpins Stevie Fieldsend’s practice and is predicated on the theory that all objects reflect each other in time and space. 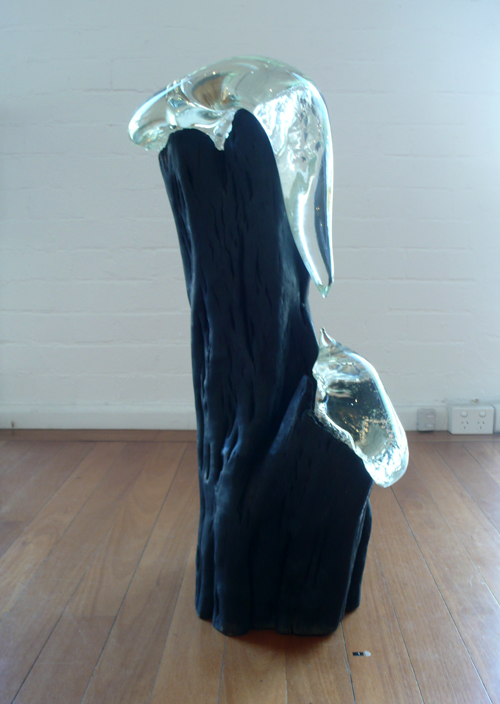 Genesis, a gathering of, blackened, hewn trunks, human in scale, with viscous glass issuing from fissures in the dense, dark wood, stands sentinel in the exhibition space. Nearby, an installation of smaller ‘descendant’ figures contained on a charred geometric foundation, engage in an ambiguous but dynamic spatial dialogue. The entanglement of family ties, of succor and separation, skin and kin is central to Ascension with the ‘one step at a time’ stairway format of the installation, and in the placement as opposition and connection of the forms of glass, fibre and resin artefacts embedded and nestled into the series of charred and worn wooden treads.

Stevie Fieldsend’s works are an outpouring; the physicality of the works is palpable in both presence and production. With total immersion of mind, body and soul, the artist engages in a kind of choreographic tour de force – lumping logs, grinding metal, blowtorching, and hefting and working lumps of molten glass in the searing heat of the hotshop. This contained energy and dynamism is also significantly inherent in the ultimate configuration of her installations.

Originally from New Zealand, of Samoan and European heritage, Stevie Fieldsend lives and works in Sydney. She studied glass at Sydney College of the Arts and The Jam Factory Craft and Design Centre in Adelaide and has worked in glass design and production, now focusing on installation and sculpture. She has participated in solo and group exhibitions including Talente in Germany and Tenderhook at Greenhill Gallery, Adelaide and was a finalist in the Royal Bank of Scotland Emerging Artist Award in 2011. Stevie Fieldsend was recently commissioned by London based Studio Toogood for The Blocks project, now at Pier 2/3 Sydney, and which will tour internationally.