An emerging artist based in the Blue Mountains, Diak is fast becoming known for the way she uses evocative, gentle washes of watercolour to build up luminescent layers of delicately pigmented colour.

Haunting and mysterious, Diak’s otherworldly self-portraits emerged after a series of sleep paralysis episodes inspired reflections into notions of self-projection and doubling. Investigating the idea that we create our own metaphoric ghosts that stand in as surrogates for our fears, anxieties and repressions, the firmness of our identity boundaries is brought into question in Diak’s ethereal and evocative works. Although the paintings explore dualities and splitting of the self, at their core they are testaments to strength and resilience, touching on universal themes of identity and self-acceptance.

This exhibition is presented in conjunction with the Artereal Gallery Mentorship Award which is presented each year to one graduating Bachelor of Visual Arts Honours student from Sydney College of the Arts. Monika Viktoria Diak was the 2020 recipient of this award and it is with great excitement that we present her first solo exhibition with Artereal Gallery.

To view & purchase artworks from this exhibition scroll to the end of this page. 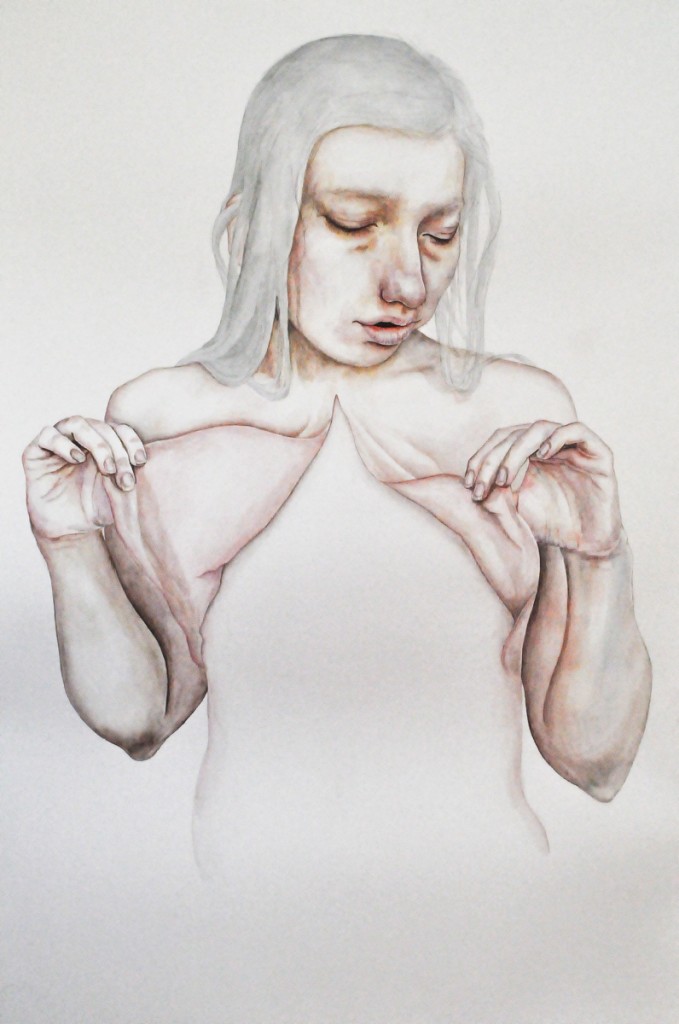 “I awoke in the dark of the night in an unfamiliar place, startled awake by the distinct feeling of the distribution of weight across the mattress shift noticeably – someone had laid down behind me on the bed. I presumed it was my close friend and travel companion who had been asleep in the bed across the room. Concerned, I worried she had experienced a nightmare, or was undergoing some deep sadness keeping her awake and was in need of comfort. I attempted to whisper her name softly in the dark, trying to turn to see if she was alright. I found myself unable to do so. Perplexed, I tried again, making a considered effort to roll over and call out. Again, I found I could not. I was paralysed, unable to move or speak. I lay motionless, gripped with fear in the realisation that something untoward was happening – and I was utterly helpless. The episode could not have lasted more than half a minute. In the dark it felt like an eternity. Mustering all my strength I finally wrenched myself upright. Peacefully, across the room in her own bed, I observed my friend sound asleep. There was no one behind me. My heart hammering in my chest, I lay sprawled across the bed till dawn. Stubbornly denying even an inch of available space on the mattress, I was defiant that no spirit would share my bed that night.

It was 2012 and I had just experienced Sleep Paralysis for the first time. I had never heard of the term before and was not familiar with this particular form of sleep disturbance. As confusing and alarming as the episode itself was, I found myself more unsettled in the answerless aftermath. I was after all a sceptic, and did not believe in ghosts. I was uncomfortable in the sudden irrational questioning of my own core beliefs. What I knew, or thought I had known, had been confounded by what I had experienced, and my lack of rational explanation agitated me. It was only after my second sleep paralysis episode that I finally discovered the term for such anomalous experiences. Finally, it all made scientific sense. A hypnagogic physiological state was accountable for the sensory hallucinations. There had been no ghost – because they do not exist. However, the idea of spectres had crept into my mind, and I found myself haunted by the thought of them.” 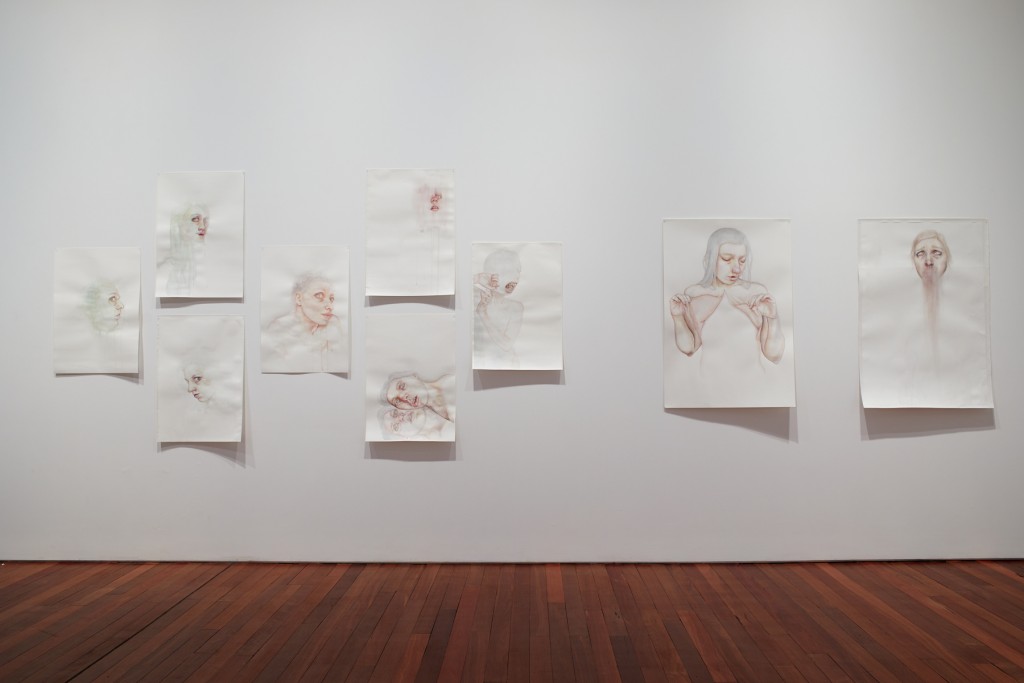 The catalyst for my Spectral Phenomena series were two sleep paralysis episodes that occurred in 2012 and 2014. The extent of the experiences left a lasting impression on me and spawned a variety of speculations on the nature of anomalous experiences such as the belief in ghosts, phantoms and various other paranormal phenomena. These in turn led me to explore the ways in which ghosts have been represented and used as symbols of the unconscious mind and the unknown. However, as opposed to having a naïve or credulous attitude to them, my artworks explore different strategies for them to be deployed as ciphers for unsettling and unaccountable experiences. These sleep paralysis episodes drove home the extent to which people can, and still do, believe in ghosts.1

Because sleep paralysis was the catalyst for embarking on this work, the biochemistry and neural activity during dreams and sleep disturbances is important to consider in order to deduce a connection between the dream state and paranormal hallucinations. For, ghosts can be demonstrated to be corollary of intense emotional, psychological, and neurological events. Much like a reflection or shadow might, the metaphor of the ghost can offer an alternative glimpse into the idea of the self as situated firmly within the body. To understand this is thereby to find a deeper understanding of the self as a result of forcibly uncovering the dichotomies present in our personalities.

Ghosts have long had a place in folklore and shared cultural beliefs, studied across a number of genres, including art, literature, and psychology. During the Victorian era, ghosts became a way to dissect social and psychological beliefs and were used to comment on societal injustices. In her book, The Ghost: A Cultural History, Susan Owens explores the way that characters, when transformed into ghosts, gain the authority to find justice for wrongdoings such as heartbreak or unfaithfulness, the sorts of injustices that usually went unpunished in life: “Ghosts have been forged by death into powerful agents of emotional  justice.”2 It is also notable, that the phantoms that appear in stories written by women tend to be less horrific or dangerous. Instead, their presence indicates that something is amiss in the natural world. For indeed, in the nineteenth century and well before, the oppression women faced at home and in society often far outweighed the horrors of any supernatural phantoms. Ghost stories became a discrete way for female authors to express their anxieties and desires at a time when they could not voice their concerns more openly or explicitly.3

One of the powers of ghost stories is the way they explore and express anxieties and ineffable taboos. They are avatars or aliases for inner desires or fears. Owens prompts us to reflect on what else ghosts can tell us about ourselves. The spectres painted in my artworks are similarly not concerned with gory depictions of the dead or as conjectures of an afterlife, but rather appear as a means to explore unspoken emotions related to unease, misplacement and unrest – hence also the role of the uncanny.

In this body of work the ghost can be seen as a manifestation of the double, or shadow of the self, now an established avatar according to psychoanalytic readings. My work also explores the condition of the uncanny, the feeling of the familiar in the strange and the strange in the familiar, associated with our experiences with what has long been attributed to the supernatural. In creating these works I dived into researching apparitions in art and especially in nineteenth century spirit photography. While some of my works directly reference such methods as double exposure portraits or effluvia, others allude to the uncanny through more indefinite and eerie compositions. In producing this series I wanted to create a body of work that was able to suggest a loosening of identity boundaries, to slip between the real and the unreal, and exemplify the ability of art to invoke and evoke.

Through the use of the ghost as a metaphoric mirror of the self, my works reveal phantoms as shadows of our inhibitions and repressions, born from the scientific workings of our brains. The entities in my artworks can therefore be likened to moments of the quickening of the psychological mind as it forms apparitions. Accordingly, these apparitions, the embodiment of desire and fear are captured and transferred onto paper, as if summoned and retained there for an indefinite amount of time.

1 A 2017 poll in Australia found that over 35% of participants believe that ghosts exist and can influence their will on the living. “Belief”, The Essential Report, September 26, 2017, https://essentialvision.com.au/beliefs
2 Susan Owens, The Ghost: A Cultural History, (London: Tate Publishing, 2019), 89.
3 Jeffrey Andrew Weinstock, Scare Tactics: Supernatural Fiction by America Women, With a New Preface, 1st ed. (New York, NY: Fordham University Press, 2010), 19.

Monika Viktoria Diak is an artist based in the Blue Mountains west of Sydney. Monika graduated with a Bachelor of Fine Arts from the National Art School in 2007. She was awarded several art residencies in Europe which concluded in the conception of a significant body of work and her first and second solo exhibitions. During her time in Europe she undertook a critical reading of local traditional mythology and folklore, providing her own reflections on the themes contained within the individual tales. She returned to Australia in 2014, after building upon the series for over three years abroad. Monika returned to her academic studies and completed her Honours at Sydney College of the Arts in 2020, achieving a First Class Honours for her body of work, Spectral Phenomena: Corollary to Anomalous Experience. She was also the 2020 recipient of the Artereal Gallery Mentorship Award given annually to one graduating Honours student from Sydney College of the Arts.

As well as teaching art to both adults and children, Monika is currently undertaking a Research Masters at the University of Sydney looking at the way women have been depicted as ghosts in Art and Literature. 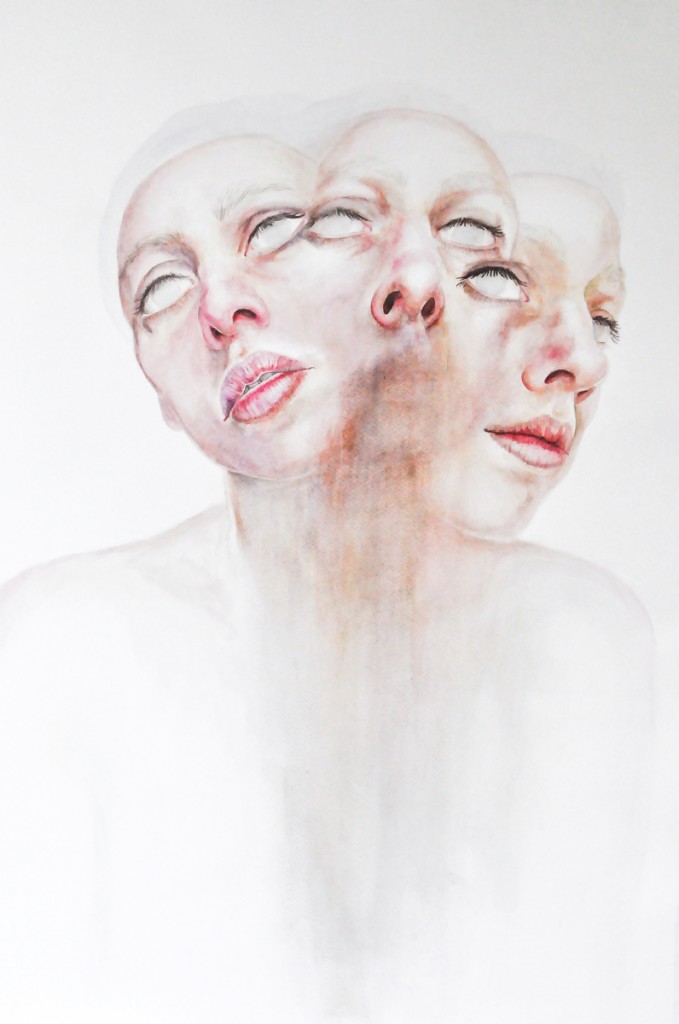