Engagement with drawing, sculpture and painting is implicit in the bold colour, minimalist, broken-form paintings of Brisbane artist Miles Hall.

Central to his recent works is the use of a non fine art material, EPS [Expanded Polystyrene], as a substrate. The polyurethane is the depth of a standard wooden stretcher, stimulating a dialogue with painting and taking it into the realm of the sculptural.EPS is a rigid, cellular, plastic-foam material that is derived from petroleum and natural gas by-products. The material is light-weight, durable and is used in the packaging, building  and construction industries and also by creative designers. Hall applies a sealant (Flex-coat) and a mesh and gesso layer under the paint surface for greater rigidity.

A series of works in watercolour on paper with irregular torn, almost ‘topographical’ edges preceded the current works which were prompted when the artist applied left over acrylic paint to scraps of the polyurethane that were lying in the studio. Pairing of these painted scraps revealed the strength of the two-and three dimensional relationships, as the artist describes, “… where edges become frontiers, new territories and dialogues are created between line, colour and shape.” 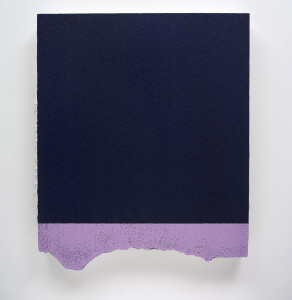 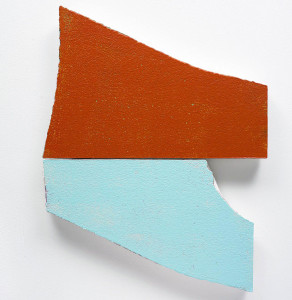 Hall’s works approach painting as construction, marked by the physicality of the medium and processes and the tactility of the surface. “…The breaking up of the polystyrene panel is at once a destructive and creative act. In fracturing the panels, new edges, limits, contours and shapes are created without trying to control or rationalise the outcome. Crucial to this process is the way in which the physical gesture of fragmenting the EPS becomes inscribed in the support rather than simply on the support (as a gestural mark or sign). The fragmented edge becomes a contour – acting as the linear component or drawing in each piece.

Colour, the emotive element, is applied with a roller: “I have tried to minimize any gestural dimension of the painting process so as not to distract from the physicality of the edge (the drawing component). In this way I have maintained my long running interest in the way drawing and colour can act as separated, yet co-dependent, formal constituents. Each work has anything from four to fifteen layers of coloured acrylic paint… This process of layering and sedimentary surface texture is akin to geological processes that occur in the landscape and confer an additional resonance.” 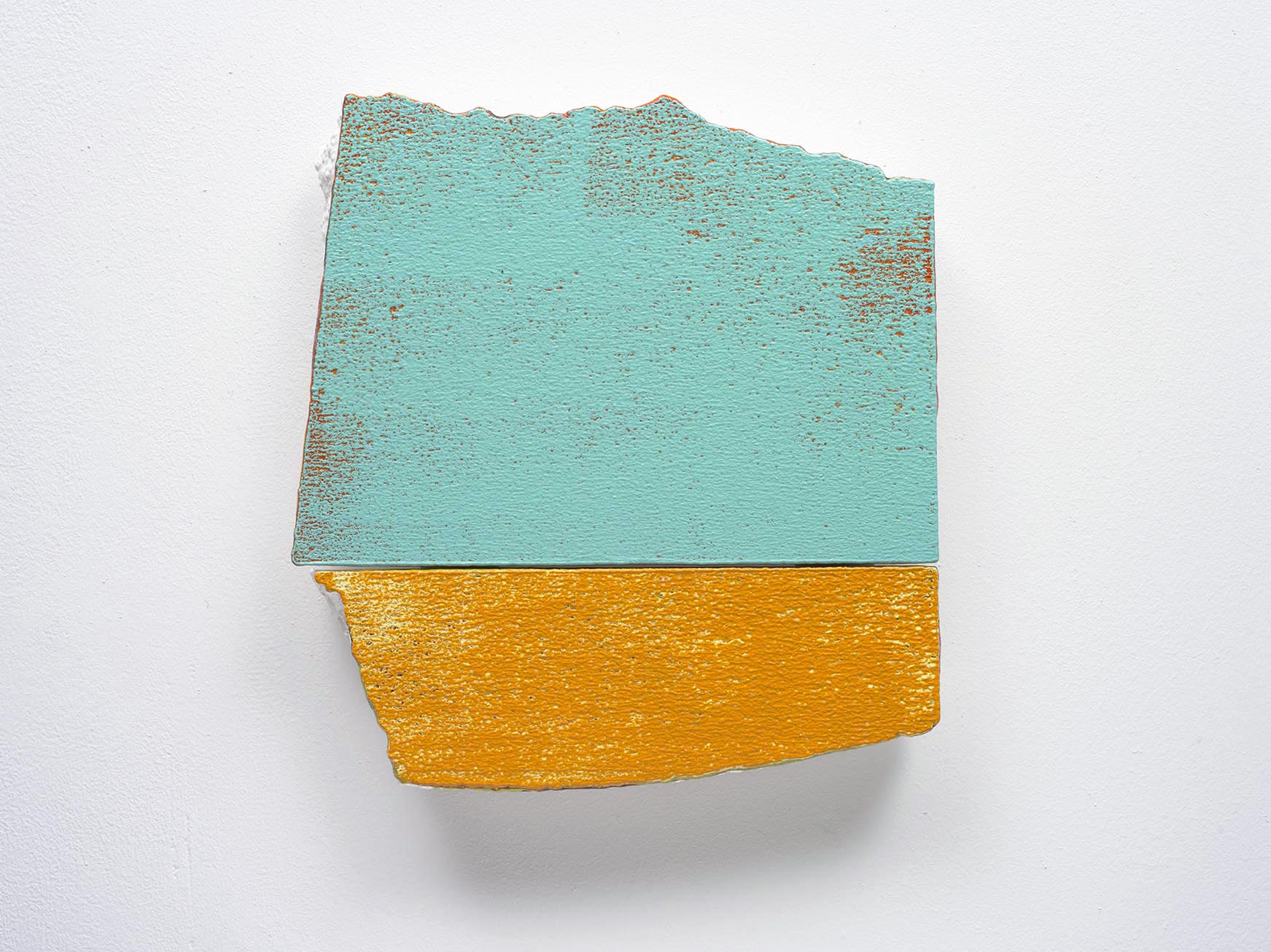 After graduating with a Bachelor of Visual Arts (BVA) Painting Major from Queensland College of Art, Griffith University, Miles Hall moved to France to study at Montpellier from 2003 – 2007, where he completed his Masters equivalent at l’Ecole des Beaux Arts de Montpellier. Upon returning to Australia, he gained a PhD from Queensland College of Art where he currently lectures.   The artist has maintained an active artistic presence in France through regular exhibitions and residencies and has an extensive Australian exhibition history in Brisbane and Sydney. His works are in major collections including Artbank, University of Queensland Art Museum, Redcliffe Regional Gallery, Caloundra Regional Gallery, Grafton Regional Gallery, Griffith University Art Collection, State Library of Queensland, Polish Art Foundation, l’Ecole Supérieur des Beaux-Arts Montpel­lier France, Shandon University China and significant international and Australian corporate and private collections.