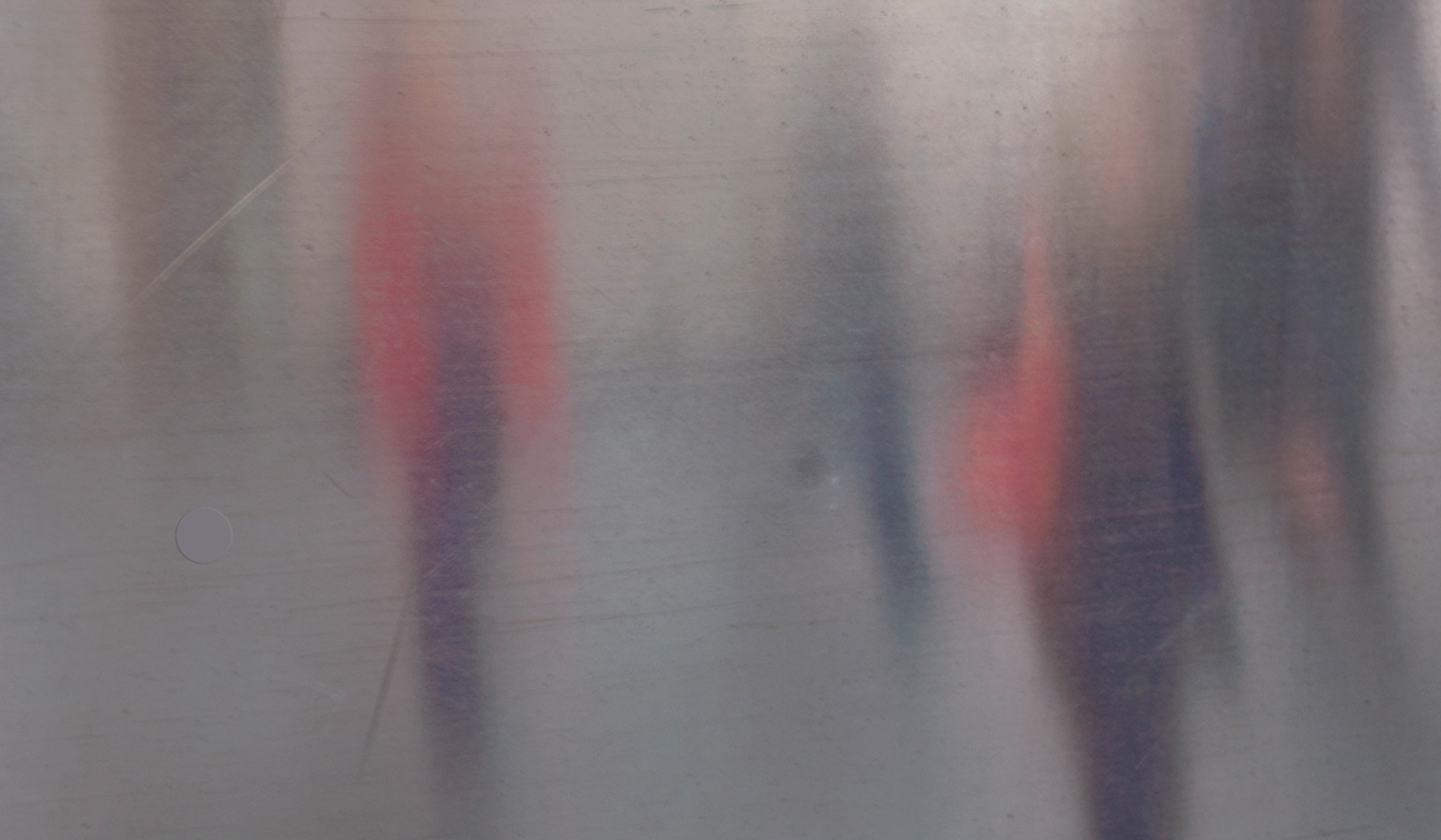 A challenge to habitual patterns of seeing and perception motivates Rebecca Beardmore’s art. The artist toys with the notion of reflection as physical image and in the psychological sense of review and introspection in her exhibition, ‘On Reflection’ at Artereal Gallery.

Rebecca Beardmore’s landscapes both restrict and open the field of vision for the viewer inviting surrender to the fantasy of the real. She has gone from the lookout locations of her last body of prints to the built urban experience of the city environment where metal and glass dominate. She has intentionally chosen architectural metal cladding and industrial print processing to portray fragmented truncated and elongated figures integrated and absorbed into the fabric of urban architecture during their daily commute.

The theatre of city life is seen in passing; distorted, amorphous and anonymous: a transitory acquaintance; merely passing through. Falling into abstraction but anchored in reality with recognizable though ephemeral figures, the busy and solid ground disappears in the surface sheen of the works. Seeking to find the personal quiet in the cacophony of the city, these works are situated on the threshold and in the mix and merge of private and public – then filtered through recall in the phantasmal prism of the camera lens. 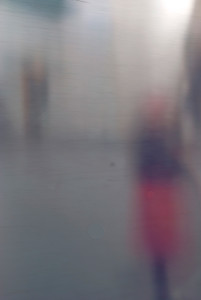 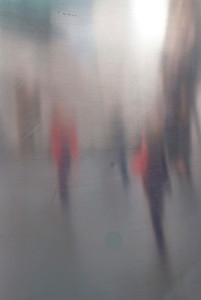 “Silver screen” is a metaphor used for cinema, and a cinematic quality is pervasive in these works, capturing the mystic and mythic qualities of reflection in the metallic surfaces. The departure images are shot obliquely. The artist photographs on site. However it is not the view directly in front of her that she shoots, but as it appears immaterially on the surface of a metal sheet placed opposite. This approach heightens elements of intimacy and alienation and intimations of surveillance in the works. A series of impressionistic portrait images, printed on to paper has the same sense of fleeting illusion and immateriality from being initially shot in this way before printing.

Print-media is again taken beyond traditional practice in the architectonic, yet ephemeral installation, ‘Borrowed Scenery #2’. Gently moving in response to air currents within the space, a cluster of three semi-translucent, sandblasted and silk-screened acrylic sheets hang suspended from the ceiling of the gallery. These simultaneously refract, reflect and fragment the streetscape seen beyond the gallery through the large window in the front façade of the building. At the same time, the mirrored surfaces of the panels echo the interplay of space, people and objects inside. 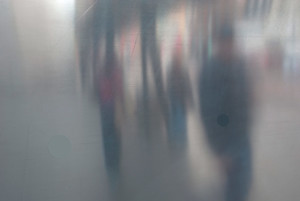 Rebecca Beardmore adds an extra level of perception to many works with a prose commentary written by the artist in the role of observer. The text is faintly silk-screened onto the panels. The intriguing, barely legible narratives further extend the views both physically and psychologically with the introduction of this voyeuristic spectator. Rebecca Beardmore won Australia’s most prestigious print award, the Freemantle Print Prize in 2010. Her work is held in the collection of the Art Gallery of New South Wales and a number of significant public and private collections.