Sam Holt’s engagement is with the imagination and the enigmatic. His painting style and approach is visceral and spontaneous distinguished by lyrical riffs of colour and linear flights of fancy.

He works intuitively and speaks of “acting on thoughts or dreams and ideas in the now … of being present and open to possibilities – both present and in the future”.

This translates as a painting style that is volatile, dynamic, spontaneous and speculative. He works ‘alla prima’, directly onto the canvas with paint laid on at first attempt and in a single sweeping line or application and no prior sketching. A painting is built on with multiple campaigns. The artist revisiting in response to idea and impulse to apply richly coloured impasto oil paint in his characteristic calligraphic gestures onto expanses of raw, coarse-weave linen.

An element of performance and physicality distinguishes these paintings. The act of making is apparent – the heft of a laden brush as it arcs upward and the release and free flow of paint with the downward sweep. The lunge, the reach of the artist’s arm, of advance and retreat, call and response, put and place, are evident in the expressive marks and  paint  trails and redolent of the life force that is both a subject and way of making for Sam Holt.

His works are ‘landscapes’ of the mind, yet have resonances with those in nature, many revealing a notional horizon and areas of ‘reflection’ above and below. A meander, as both a line and as a means of ‘finding his way through’, is a recurring motif in both Sam Holt’s imagery and his process. 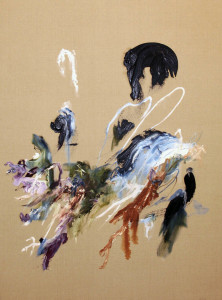 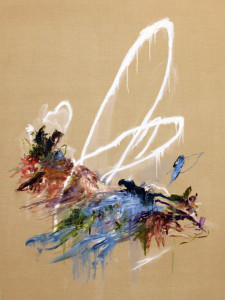 His calligraphic mark-making and sparse expanses of canvas are vested in an Orientalist sensibility that pervades his practice through allusion to both the landscape form and the spirit of retreat into nature of the Asian literati painters and their philosophies with which he had opportunity to re-engage on a recent research trip in Asia.

Sam Holt is a Sydney based early career artist. He has studied at the National Art School and is currently undertaking further studies at Sydney College of the Arts, University of Sydney. Solo and group exhibitions in Sydney include How can you swallow so much sleep, Sheffer Gallery (2014); Herbert–Smith Freehills Group Show, Sydney (2014); Abstractions, Janet Clayton Gallery, Sydney (2013); Sam Holt, Janet Clayton Gallery, Sydney (2013). His works are held in Australian and international corporate and private collections.