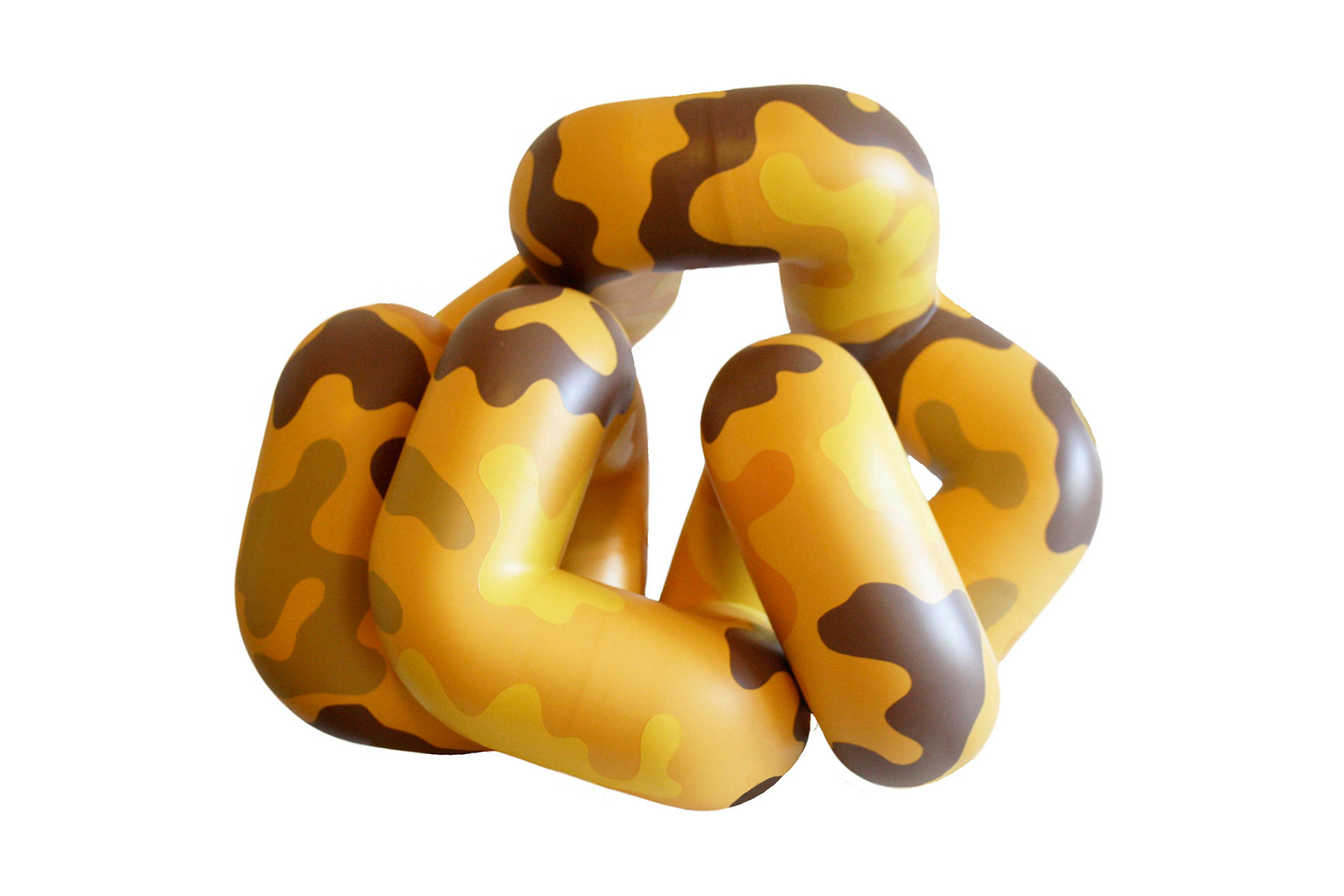 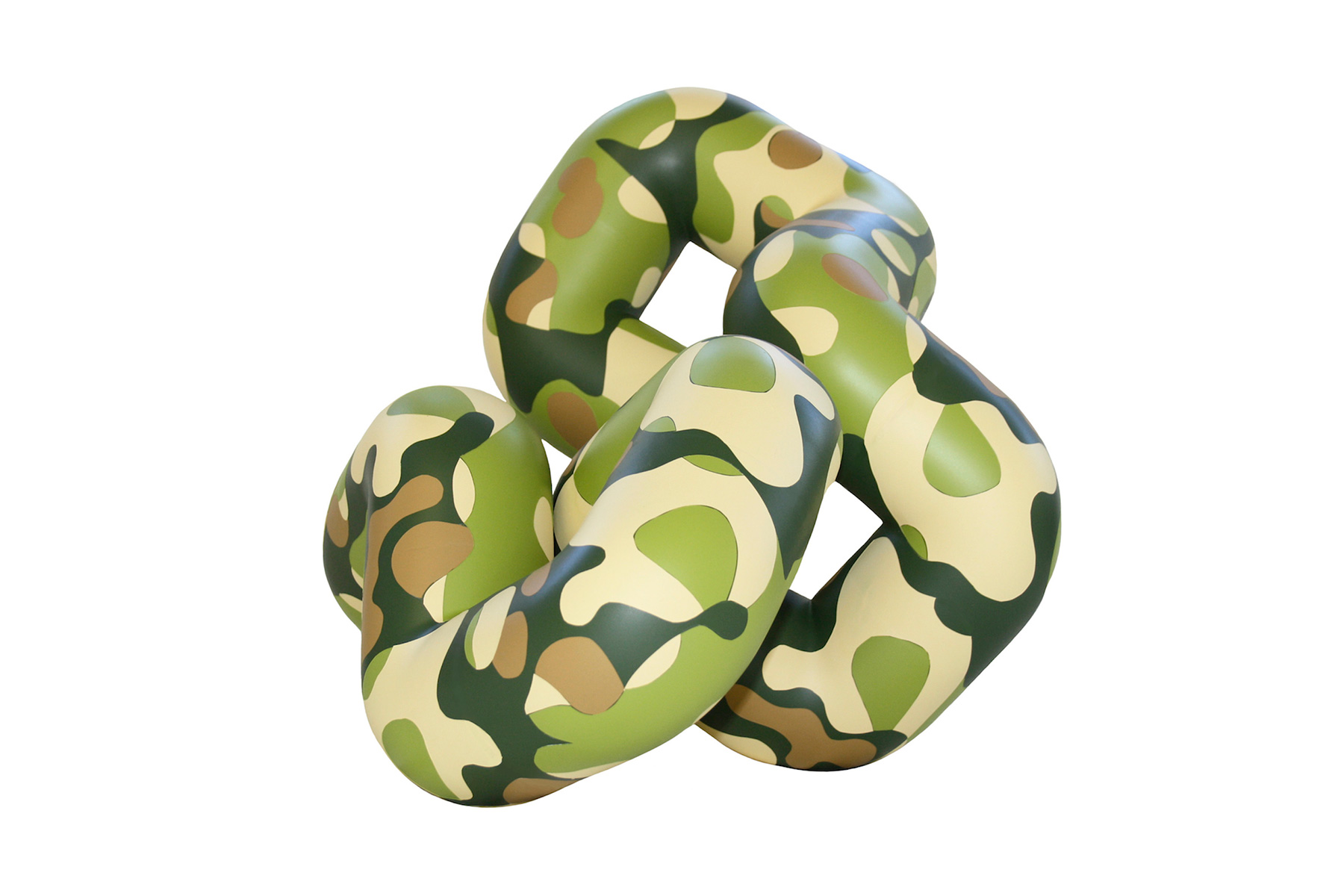 The modular components allow and reflect the freeform process of assembly, a systematic process of repetition and pattern, adopted and adapted by Booth to create infinite and interwoven knots, which, although from hard synthetic man-made plastic, allude to the sinuous, the malleable and the organic.

Scale plays an important role in the development of the sculptures. In the large scale Orange-yellow <24.300-90 degrees, the use of industrial-sized pipe poses questions of proportion in relation to how the work is visually perceived. The sculpture’s scale seemingly diminishes when placed into an expansive context as in the landscape, and, conversely, the perceived volume and mass increases when introduced into a confined area as exemplified in the deliberate placement of this work into the restrictive space of the smaller of the Artereal galleries.

Orange-yellow <24.300-90 degrees is painted in a highly visible yellow more traditionally associated with steel sculptures. The effect is to enhance an illusion of materiality, with the work appearing to be constructed from metal or a base material other than plastic. Looking at aspects of the material and the immaterial is a recurring motif in Booth’s practice, acknowledged in the technical specification detail in his titles and exemplified in his production to date of several series of monochrome installations of white works in white-on-white environments.

The introduction of colour for these latest works is a departure from the all-white – Booth adding polychrome to the poly vinyl chloride (pvc) hardware. Four wall-based works similarly tease out this cryptic relationship of the material and immaterial through the artist’s application of camouflage theory and techniques. He describes his approach: “Achieved through the use of pattern, light, and scale, the camouflage designs on their surfaces change the perception of their form by making them appear to disappear or change shape. 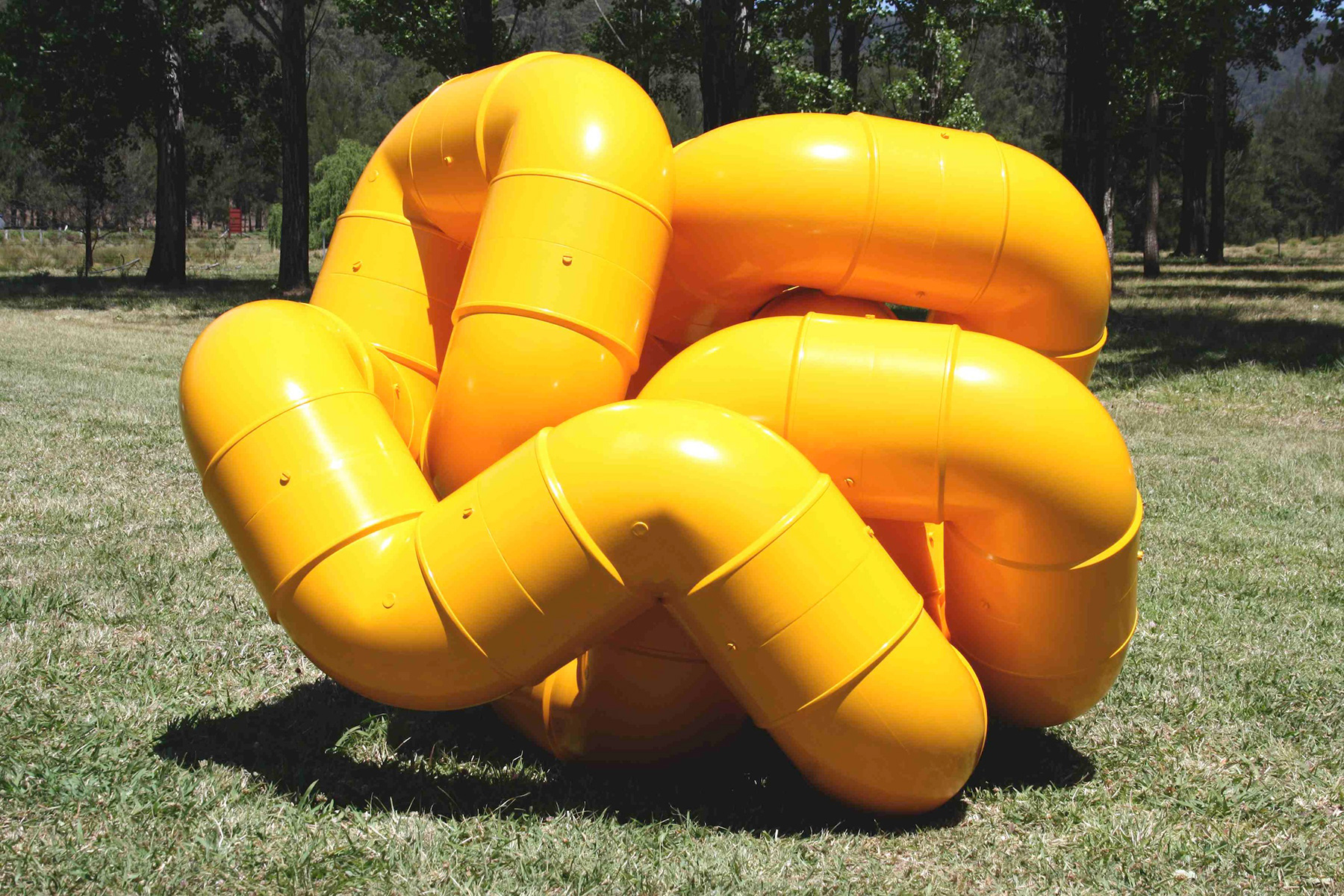 Colour and light obfuscate the objects and assimilate them into their surroundings. A natural phenomenon, camouflage can be adopted to disguise man-made forms and blend them into their immediate localities. It also transforms the artificial into the organic and disintegrates structure. The sinuous formats and patterned skins of the sculptures, and their colour schemes and markings, obliquely reference nature, whilst the choice of synthetic paints and method of application render them completely artificial. This process removes the camouflage from its normal context, highlighting the juxtaposition of imitation and the organic, and accentuating the modular configurations by disguising them, paradoxically, in a conspicuous manner.” (Text extracted from Artist Statement, 2014)

Mark Booth holds a UK degree in Graphic Design and a degree in Fine Arts majoring in Ceramics from the National Art School, Sydney. He is a finalist in numerous significant sculpture awards and exhibitions and his work is held in the collection of Art Bank as well as in private and corporate collections.

This project is supported by Arts NSW’s NSW Artists’ Grant Scheme, a devolved funding program administered by the National Association of the Visual Arts on behalf of the NSW Government.