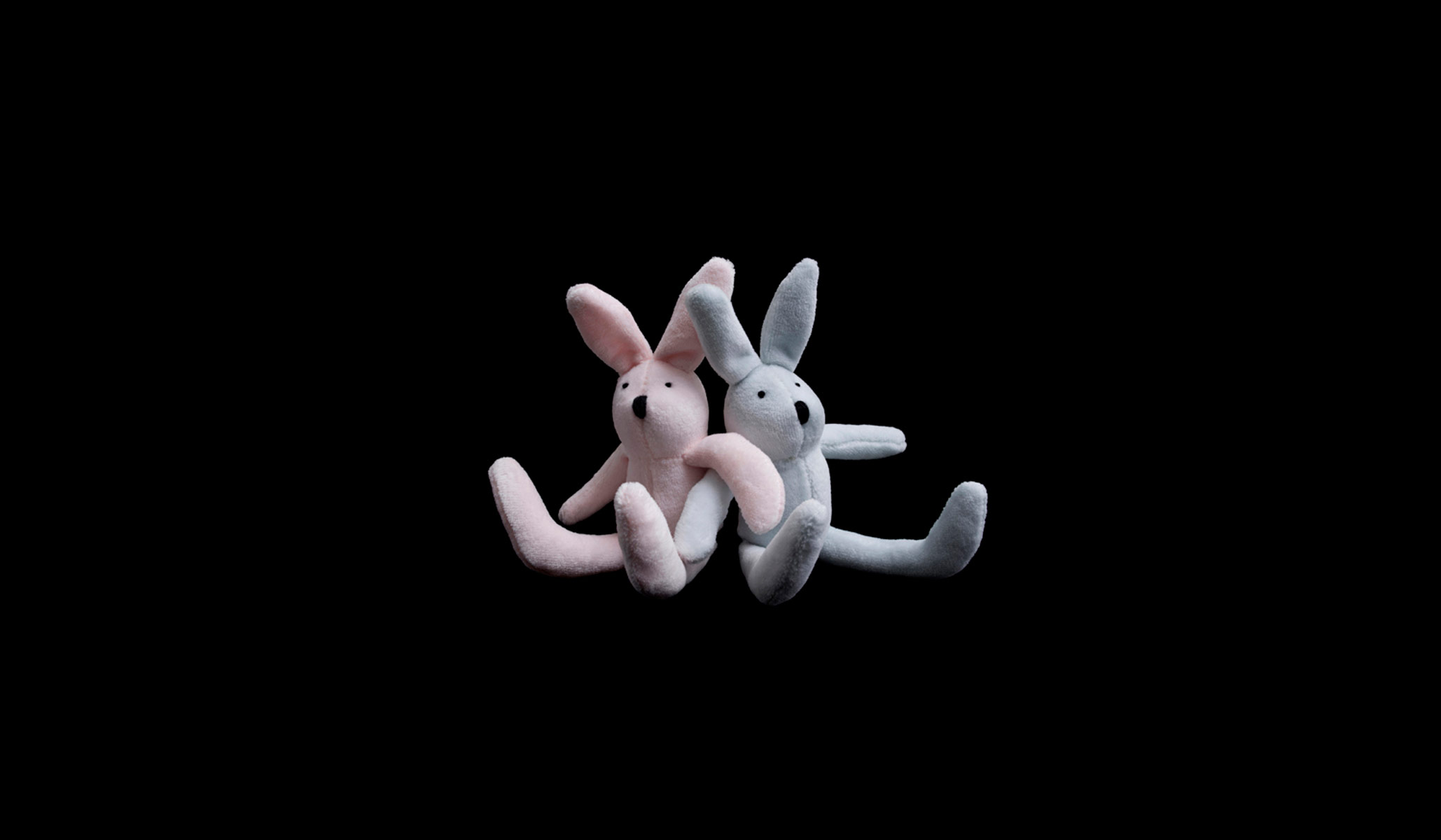 Join us for the opening of Anne MacDonald’s latest exhibition Pink & Blue, on Wednesday 7 February from 6-8pm.

Anne MacDonald’s latest solo exhibition Pink & Blue presents a series of seemingly innocent and innocuous photographic portraits of stuffed rabbits. Although they may initially appear to be nothing but cute, sweet little toys, each of these objects has been carefully selected by the artist for their symbolic references to infancy and the way in which gender is constructed and encoded during early childhood.

“The artefacts of material culture are symbolic of our time. Attributing gender specific colours to baby products is not only driven by a desire to increase consumption, but also reflects a conservative pink-blue world view of femininity and masculinity.

Gender colour coding in the nursery and the toy store may seem cute and innocent, but by establishing gender binary stereotypes we are drawing clearly defined parameters for girls and boys. Dividing children into pink and blue limits possibilities, undermines freedom of individual expression, and creates conflict for those who do not easily conform to these simplistic and arbitrary codes.

While collecting and photographing toys for the Pink & Blue project I started to think about how to express the disturbing and negative aspects of gender coding through my photographs. This led to the idea of creating an installation reminiscent of a nursery at night; where darkness creates a sense of isolation and vulnerability; and even the cutest and cuddliest toys seem sad and lonely.” 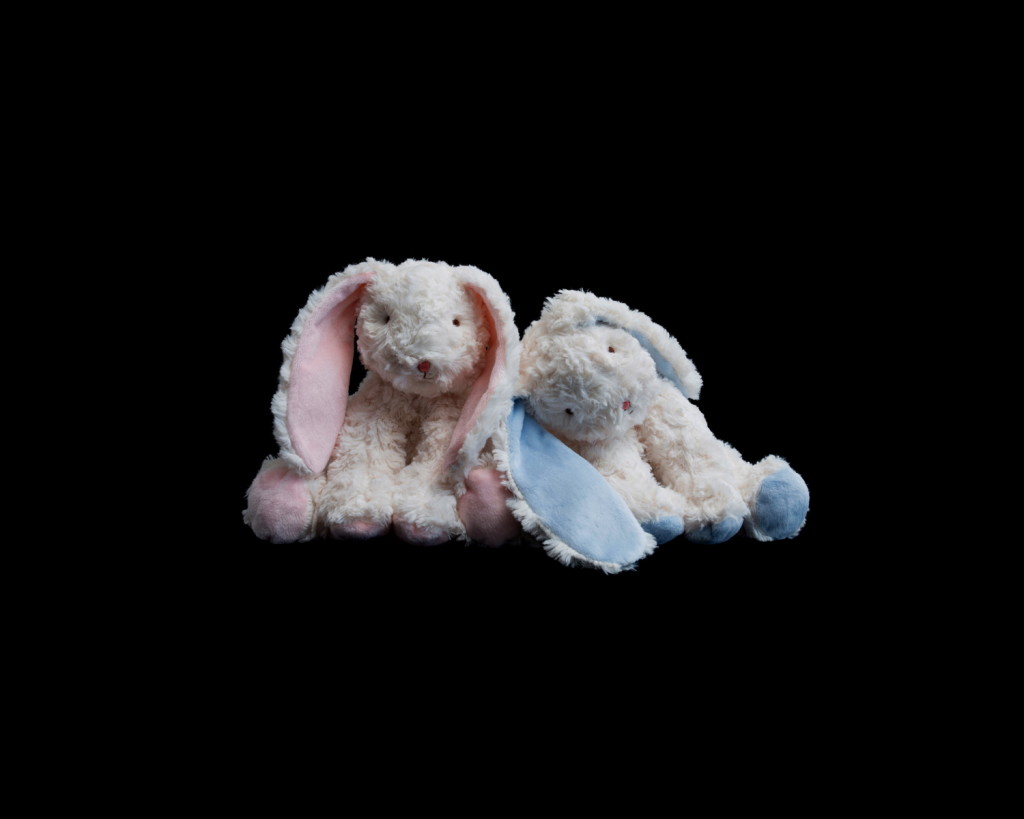 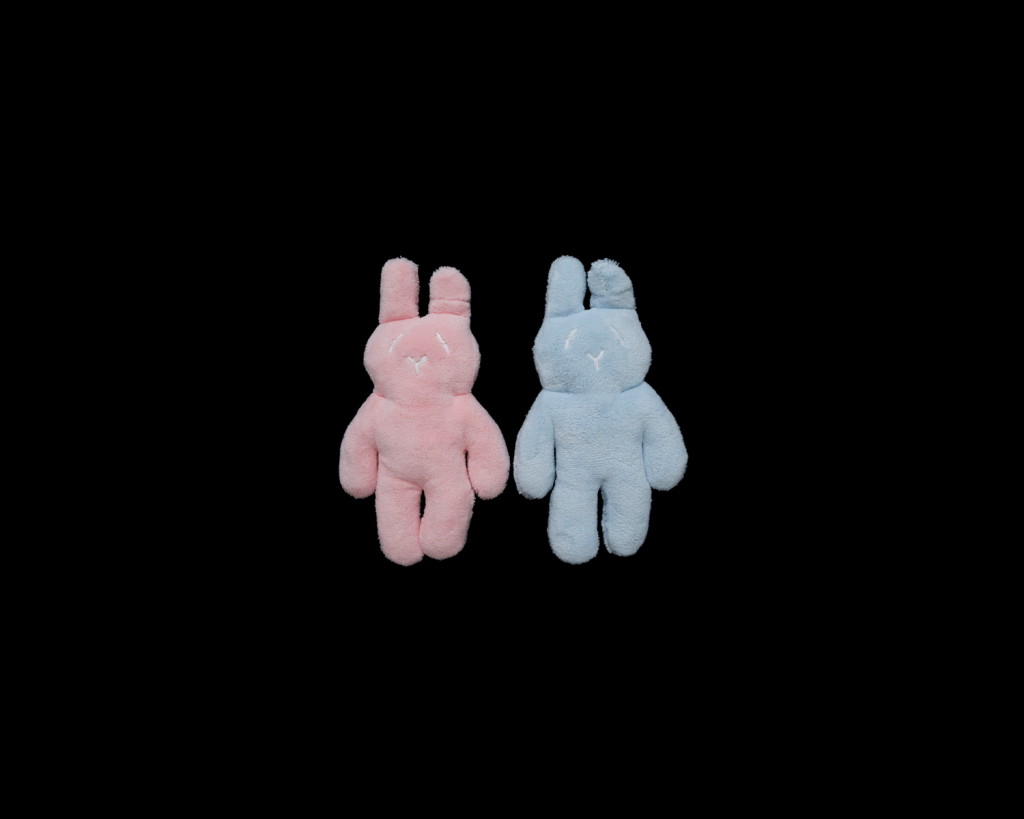 Printed on a scale that renders them larger than life, each pair of stuffed toys, one blue and one pink, have been captured by MacDonald in what has become her signature style of almost hyper-realist photography. The soft plush texture of the stuffed rabbits can almost be felt. Each and every detail is pristinely captured. The casual way in which some of the toys slouch against or turn away from each other, lends these lifeless toys just the faintest air of life-like animation…

The artworks themselves evoke the stylized professional studio portraits taken of newborn babies, whilst simultaneously eluding to the uniformly stark visual language of the commercial ‘product shot’, a universal vernacular now familiar to all consumers via our daily immersion in the world of advertising, store catalogues and online shopping.

In researching and creating this series, MacDonald was influenced by the writing of Jo B. Paoletti – an American scholar who has written extensively on the way in which consumer culture shapes identity – particularly gender. Expanding upon the questions raised and explored by Paoletti, MacDonald’s photographs prompt viewers to consider the phenomenon and effects of labelling and categorisation on the way in which we understand, construct and define gender. In a polarised world of pink and blue there is little room for gender fluidity or individuality…

In a clever and slightly subversive nod to the booming consumer trends that surround the cult of the nursery, MacDonald has also created her own wallpaper. The repeated pattern of pink and blue stars (pieced together from photographic images of cute little night lights), subtly references the booming commercialisation which has sprung up around all aspects of early childhood in recent decades.

Since the 1980s Anne MacDonald has worked with photo media, producing large-scale photographs and installations exploring and pushing the boundaries of the photographic still life genre. Working exclusively in the studio with a large format camera, MacDonald’s photographs explore the emotional anxieties created in the counterpoise between birth, life, beauty and the transience of time on the one hand, and fragility, death, decay and dissolution on the other. Her subjects are fixed – virtually embalmed – through the photographic process, and thus raise the inevitable connection between photography and life and death. Her works are a continued investigation into the potential for objects to act as powerful metaphors for thoughts and emotional states.

Anne MacDonald received her Bachelor of Fine Arts and Masters of Fine Arts from the Tasmanian School of Art at the University of Tasmania, where she is the current Honours and Postgraduate Coursework Coordinator.