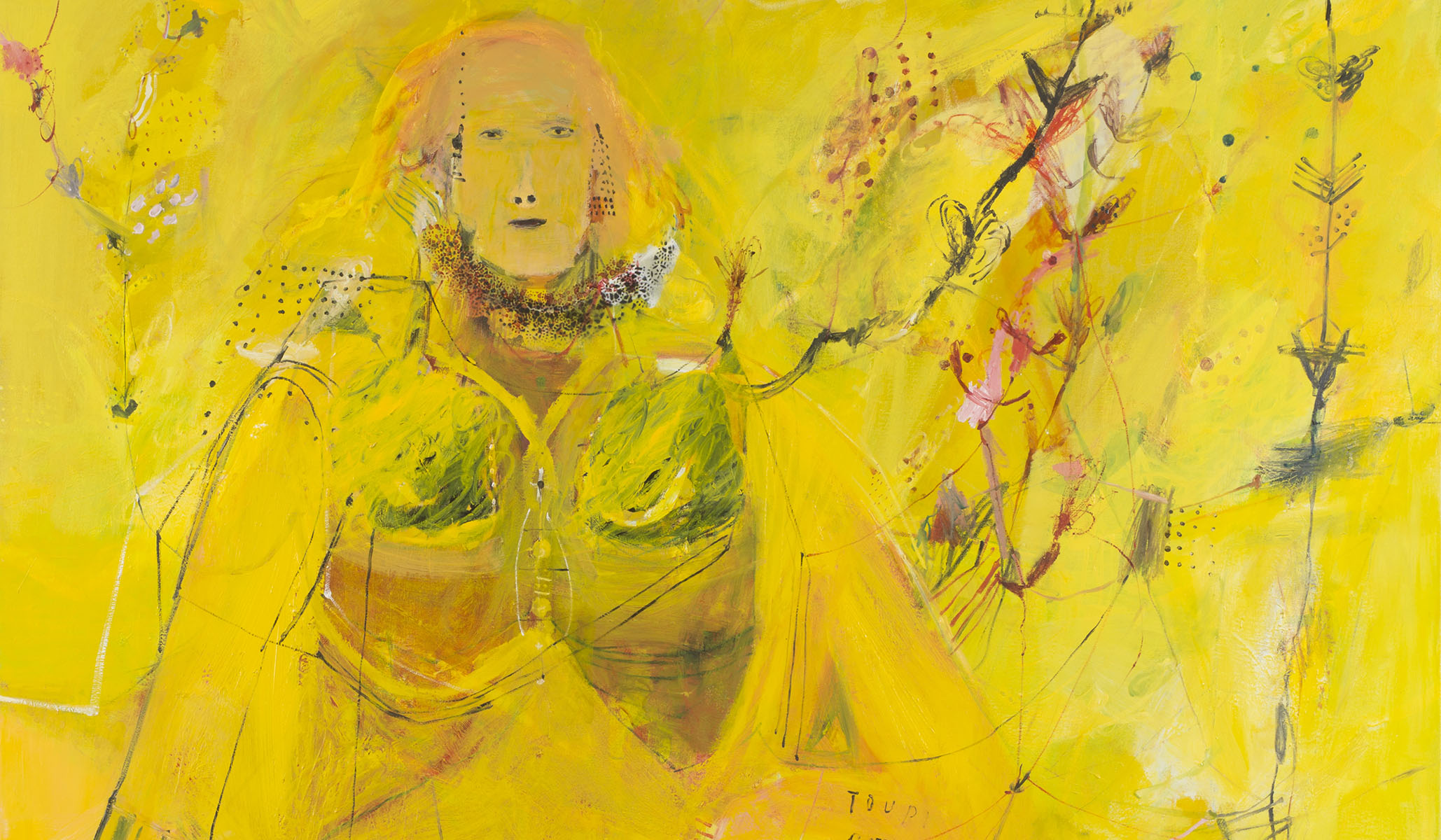 To view and purchase artworks from this series scroll to the end of this webpage or visit the gallery before 1st May 2021.

There is genius in his madness.

Philosophers from Plato to Nietzsche have argued that ‘truth’ and ‘art’ are deeply interconnected and not mutually exclusive. German philosopher Martin Heidegger refers to the ‘thingness of artworks’, or the ‘Being of artworks’ – ‘“Being” is the vague and elusive background familiarity we have that enables us to skilfully deal with particular beings’. Raftopoulos’ PERFECT NON PERFECT powerfully enacts Heidegger’s understanding as a means of intertwining ‘truth’ and ‘art’ – or more correctly, personal truth through art.

Through his personal familiarity with his Hellenic heritage, married to his experiences of an Australian upbringing, Raftopoulos has perceptively meshed diverse times, cultures and place to reinterpret the beings that populated these worlds. His works are capsules condensing past, present and potential future into a ‘oneness’ of understanding – a holistic, yet ‘poly-world’ view. In Grecians (2020), the philosophical ‘duality of being’ in both its ancient and modern senses is clearly referenced, as is the concept of ‘nature’ that the ancient Greeks evolved through ‘erudite’ (the word is inscribed upon the canvas) investigation of their pristine environment, but which industrial capitalism in the contemporary context is arguably destroying by fuelling global warming. Observation, perception, consideration, acclamation and condemnation are all at play here, and seriously so.

Thievery Corp (2017) utilises Augustus Earle’s Portrait of Bungaree, a native of New South Wales (c. 1826) and Francis Wheatley’s Arthur Phillip portrait (1786) – both figures depicted in reverse by Raftopoulos – is an exceptionally confronting political statement in regard to the British Empire’s attempted genocide of race, culture, historical truth, Indigenous sovereignty and the rape of a land’s natural wealth. The red shadow cast by Bungaree’s standing figure, as if ‘dripping’ from the British military ‘red coat’ that he wears, is unmistakably referencing the spilling of Indigenous blood across the land. Past deeds in need of justice, reconciliation and redemption. Indeed, Raftopoulos would no doubt be echoing the misanthropic deeds of all empires, including that of the ancients, for the viewer to consider. Ironically, the New South Wales Rum Corp – alluded to by the work’s title – economically exploited the colonists that it was there to protect, further descending the deeds of empire into a cannibalistic abyss of self-corruption and deceit. Is the artist concomitantly pointing an allegorical figure towards contemporary neo-capitalist values?

Tableware, or more particularly ceramic dining plates, as ceremonial or decorative aesthetic, public commentary and cultural tradition is also an essential aspect of Raftopoulos’ oeuvre within this exhibition. Don’t worry, they are not intended to be smashed… or are they? Raftopoulos’ plates are commercial plaster casts produced for a principal purpose – to be shattered. Ancient Greeks ritually smashed plates on occasions of mourning, or to display conspicuous food consumption and idle wealth. In modern times, Greeks smash plates in tavernas in gratitude, applause, and acclamation of singers, dancers, musicians and the joy of living. As Alexis Zorba declares: ‘A man needs a little madness, or else… he never dares cut the rope and be free… Dance. Did you say dance?… Come on my boy!’. Smashing provides release from sadness or the exaltation of joy – Life is to be lived!

Raftopoulos has inscribed a word upon a number of his plates identifying not simply the figures depicted, but arguably more so the emotional states of identity or ‘being’: KOOKLA(innocent child/doll); HELLENE; ADVENTURΣ. During the Greek junta (1967–74) plate smashing was outlawed – as was a life of freedom. Broken ceramics (including those of plates) were utilised in ancient Athens as ‘ballot forms’ in a vote to potentially expell unwanted individuals from the city state – the voting sherd was known as an ostrakon: hence the English word ‘ostracise’.  So Raftopoulos’ aesthetic dance across contrasting times, place, meaning and ‘being’ continues unabated. Like his paintings, the plates are ‘poly-world’ views: museums of extremes of human experiences exposed for the appetite of the mind and eye to consume and digest; both the seen and the suggested. A consistent and ongoing dialogue of conversation exists between canvases and plates – and the resulting narrative is free for the passer-by to engage.

Stylistically, Raftopoulos’ highly expressive figurative abstraction of liberated line, rich explosive and deeply luminous colour, and implied or actual textural engagement, collectively wander the canvas and his plaster plates as though automated by self-will. The canvas of GOLDEN NAPOLEON (2019–2020) bursts with blistering golden hues, etched with delicate, often spindly organic lines that corral space in forms generating a figure both in aura and in awe, surrounded by an enlivened wonderland of plant life. The freedom of line, colour, form, texture and visual energy is paramount for this artist – Raftopoulos’ formal aesthetic is an unleashing of emotional intent. A dream-like quality emerges and beguiles the viewer. The artist’s plates, though immediately reminiscent of ancient coinage and gesturing towards ancient Greek vase painting in regard to stylistic origins, boldly continue his aesthetic adventure. One of his HELLENE plates reimagines a figure garbed in fustanella (skirt-like garment) and richly embroidered jacket or vest worn today by Evzones (Greek Presidential Guard), through simplified, uninhibited, spontaneous blue lines against a white background (Greece’s national colours), emboldened by areas of lavish gold, red, yellow and orange. The freedom to emancipate line, colour and form from direct representation to intuitive symbolic gestures, expresses an organic dignity of structure and an idiosyncratic aesthetic resolve.

Raftopoulos’ visual narratives reveal the search for perfection, but also its deceit – perfection is a myth, an illusion, an ideal. The adventure of human interactive existence, of ‘being’, may aim towards perfection, but the lived reality across generational time suggests that we are in search of a dream. This artist’s ‘poly-world’ views highlight the good, the bad and the ugly of his journey, of our journey, but by braiding ‘truth’ and ‘art’, he also permits us to continue to dream. 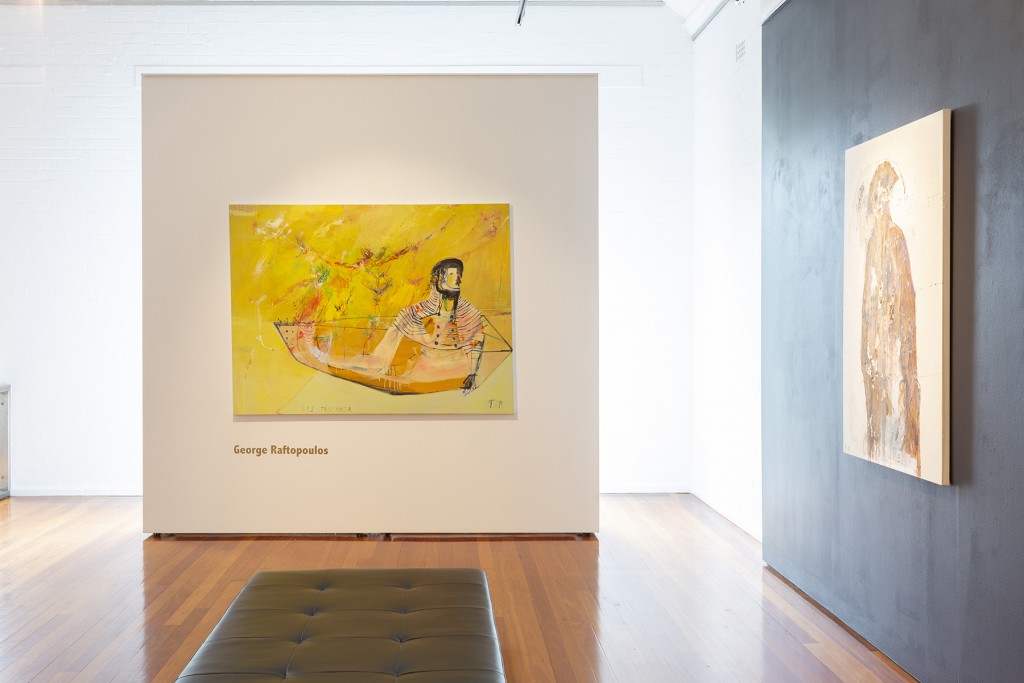 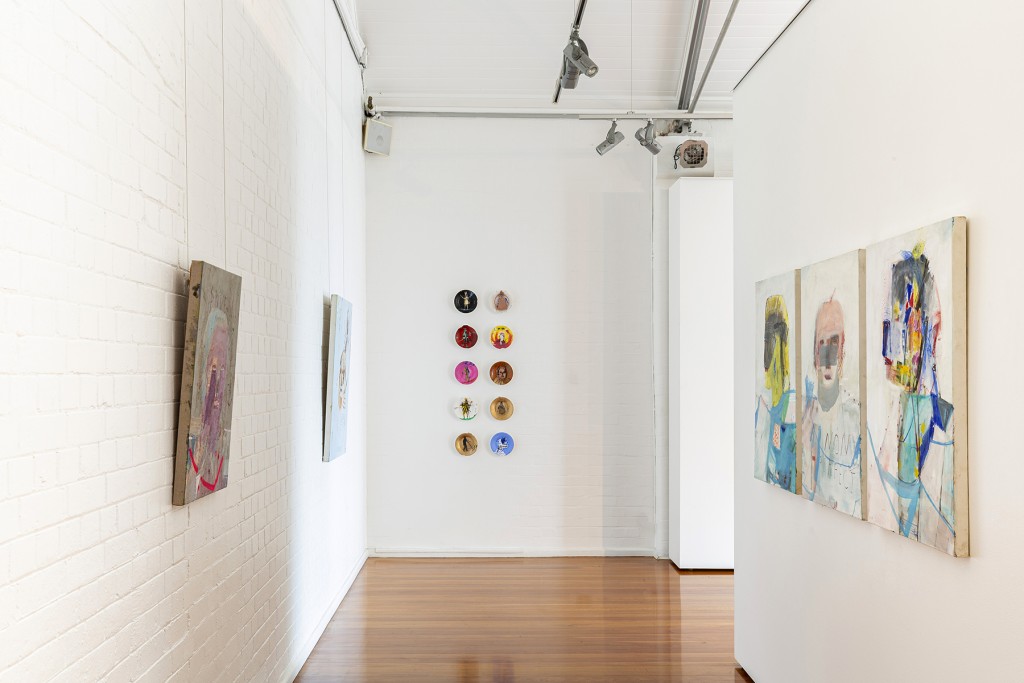 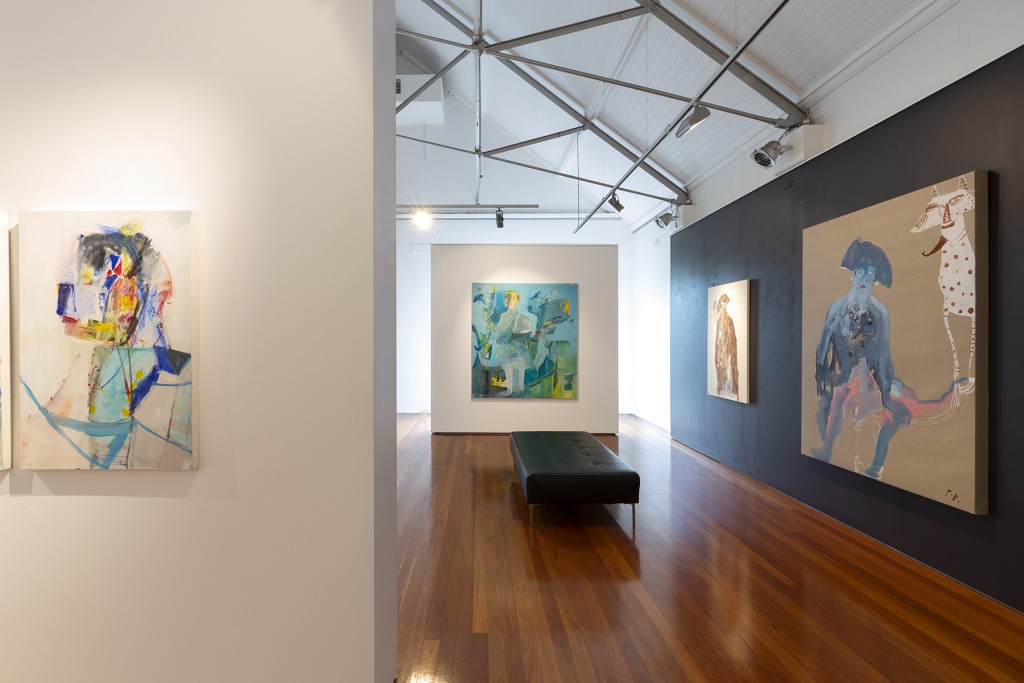 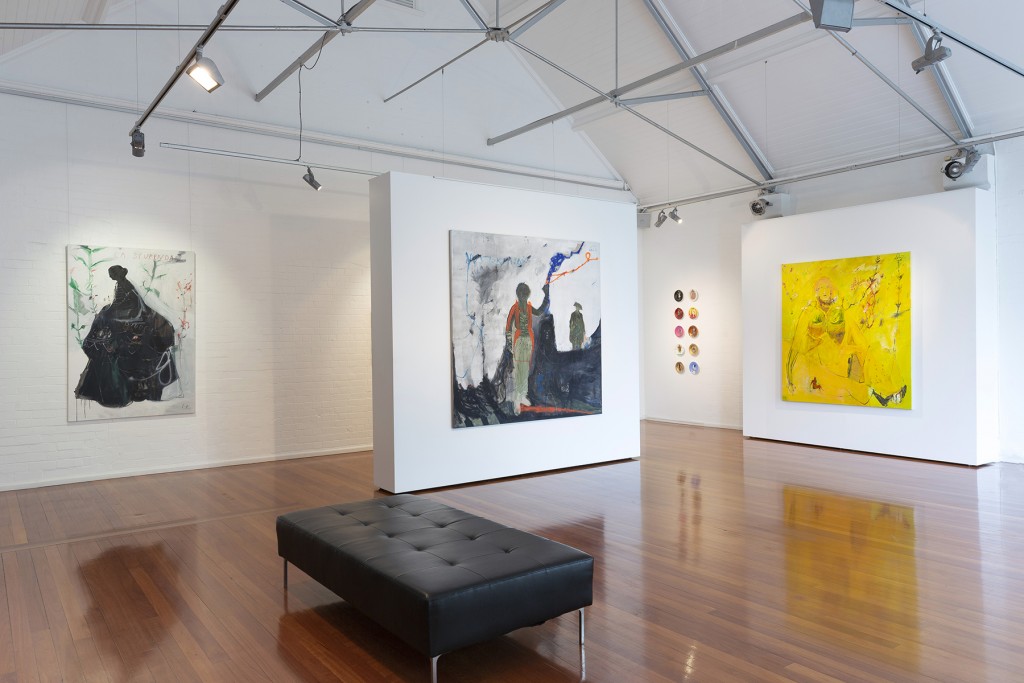 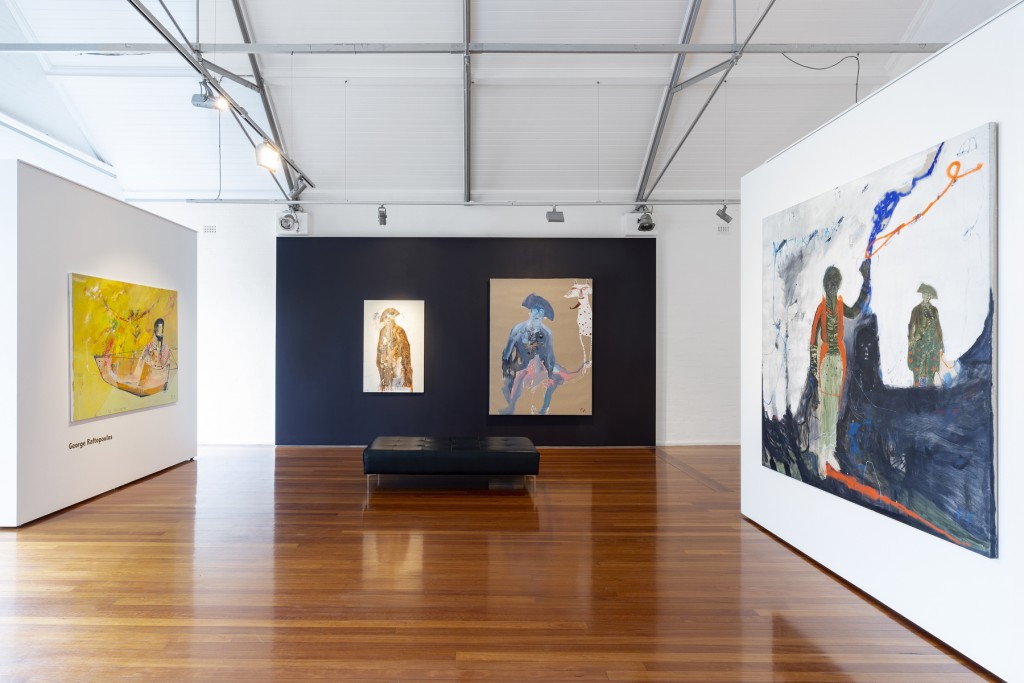 George Raftopoulos completed his BAVA at the University of Western Sydney in 1994 before going on to receive a Graduate Diploma in Painting from Sydney College of the Arts in 1997.

George Raftopoulos’s paintings are immediate, responsive, intuitive. He is a story-teller. In the manner of Aesop his paintings are modern visual fables and moral lessons; observations on man’s inhumanity to man and the human condition and more prosaically the vicissitudes of the artist, along with musings on politics, philosophy and life.

The migrant experience pervades. George Raftopoulos mines the Greek myths and psyche of his heritage and his experience growing up Greek in a small Australian country town. His DNA is Greek, His nurture is Australian. His way of working is cathartic. It’s about George…his story, his history, his search for identity.

George Raftopoulos positions himself as part of an art-historical lineage. His works are a form of modern day myth- making, fables of modern life; a psycho-drama and collage of his thoughts, dreams and ideas and his flights of fancy. While outwardly heroic and romantic, his works frequently harbour subversive, often acerbic social commentary, and elements of self-examination and reinvention in the service of purging the angst and dilemma of constructing identity, both personal and national.

George Raftopoulos has exhibited his work extensively over the last two decades at galleries and institutions including: Bega Valley Regional Gallery, the Greek Embassy in Canberra and the Paris Print Biennial. Most recently, George presented a major solo exhibition titled ‘The IKONA’ at Broken Hill Regional Gallery in 2020.

View George Raftopoulos’ ‘PERFECT NOT PERFECT’ series in full below.

BREAK IN CASE OF EMERGENCY

She whom walks alone