Photo artist Anne MacDonald does not depict the grossly rampant, tangled and trampled mess, the tumultuous chaos, confusion and clutter that we associate with boisterous children’s parties and the debris that is left behind after the last mother has collected her over-excited child.

Instead, a sense of emptiness, of stillness, of silence and fragility and loss pervades Anne MacDonald’s poignant images of the aftermath of a children’s birthday party. The clamour and noise is no longer. A spilt drink, cake crumbs, a spent party popper, a spatter of glitter, a few nonpareils, a discarded party hat, limp ribbons and a deflated balloon are all that remain;  sad and solitary remnants that symbolize another passing birthday and yet another year of childhood gone.

Her still life photographs are a paean, a touching homage. They are stylised tableaus; understated quasi memorials to the transience of childhood and a mother’s sense of the inevitability and loss experienced with each outwardly celebratory rite of passage associated with the annual birthday party: “As a parent, observing my child growing up fills me with wonder, but also a sense of loss.

Children’s birthday parties are important social rituals, and on the surface of things, joyous and festive celebrations of life. However, on another level, they are compelling indicators of time’s inexorable passing. Children’s party decorations, food, gifts, games, toys and costumes alter each year with the age of the child. Their role extends beyond pure ornament and artifice to become symbolic of a transitory childhood world. 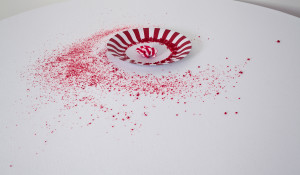 Looking at children’s birthday parties as symbols of loss and impermanence, ‘Party’ continues my exploration into the relationship between the photographic still life, transience and mortality. In this series I have recreated ephemeral banquet scenes of party cakes and decorations.  The images record the aftermath of the party, when all the fun is over, the presents have been opened, the cake eaten and the guests have left.”

Party is the second photographic series of Anne MacDonald’s that explores the transience of childhood. It follows on from Cherish, exhibited in 2010 at Artereal. MacDonald’s works are held in significant Australian collections including the National Gallery of Australia (which recently acquired a number of works to add to their existing holdings of her work), the Art Gallery of South Australia, Art Gallery of Western Australia, Gold Coast City Art Gallery and Artbank. 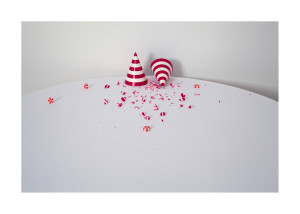 A UTAS Tasmanian College of the Arts (Art) research project.

This project has been assisted by the Australian Government through the Australia Council, its art funding and advisory body.