Lionel Bawden, Teelah George and Gary Smith reveal a diversity of approaches to contemporary painting practices in three solo installations across the galleries of Artereal.

Lionel Bawden is known for his signature sculptural works from myriad undulations of Staedtler hexagonal coloured pencils fused together and carved for cryptic amorphous objects that transport the everyday source material beyond the known and commonplace. So too, his installation The Kandinsky has two sides, fancifully and perversely transitions the humble, off-the-shelf, limited life packets of cereal, the sites of so many morning musings from quotidian consumer objects with use-by dates to vehicles for the artist’s aphoristic insight and philosophizing on the randomness of thought and the nature of dualities.

Lionel Bawden says of The Kandinsky has two sides:

“The title of this new series is taken form the film ‘Six Degrees of Separation’ directed by Fred Schepisi and written for stage and screen by John Guare. In the film a double sided Kandinsky is spun around from side to side like some novelty trophy by its millionaire owners. They boast excitedly “The Kandinsky has two sides”- a phrase delivered as a shallow vanity, not a wisdom. The fictional double-sided painting and the spinning of the Kandinsky from side to side, is an open-ended metaphor within the film. Life is neither one side of the painting nor the other. 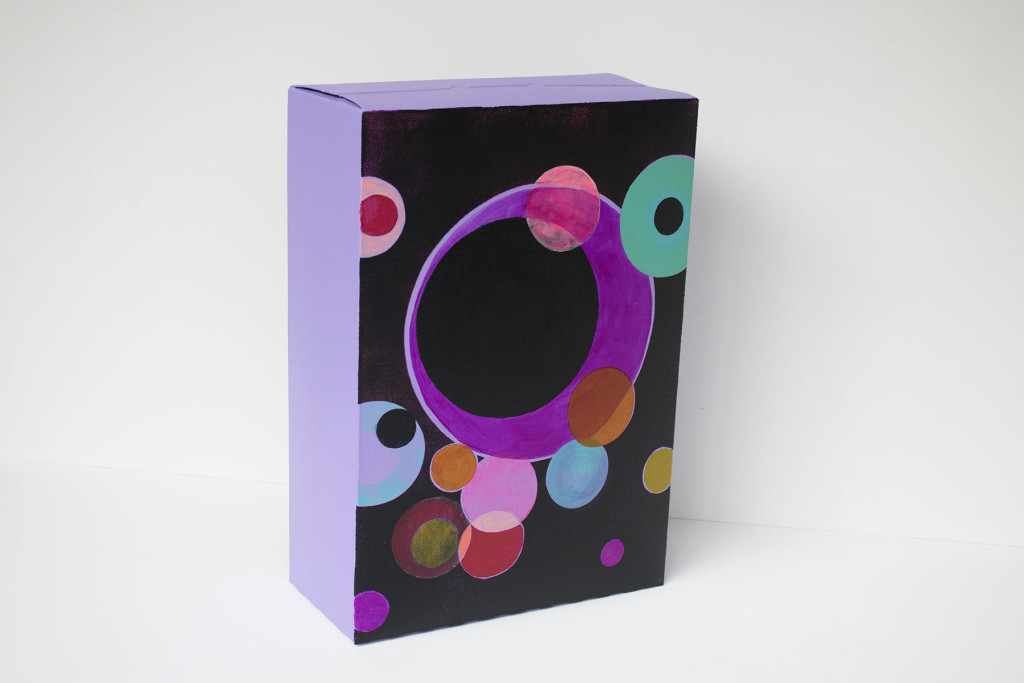 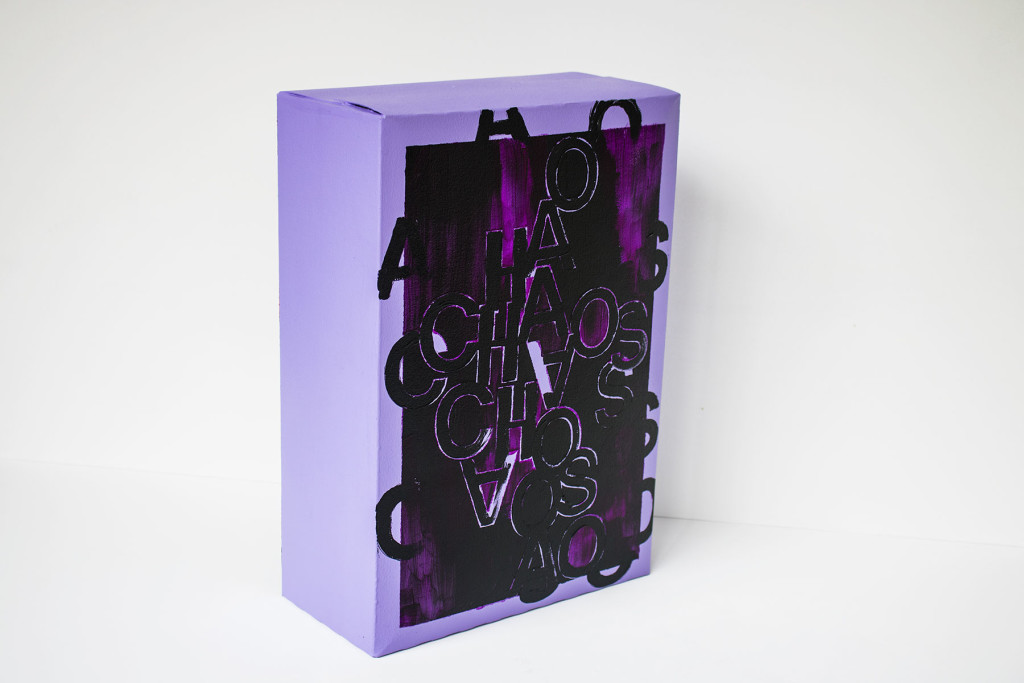 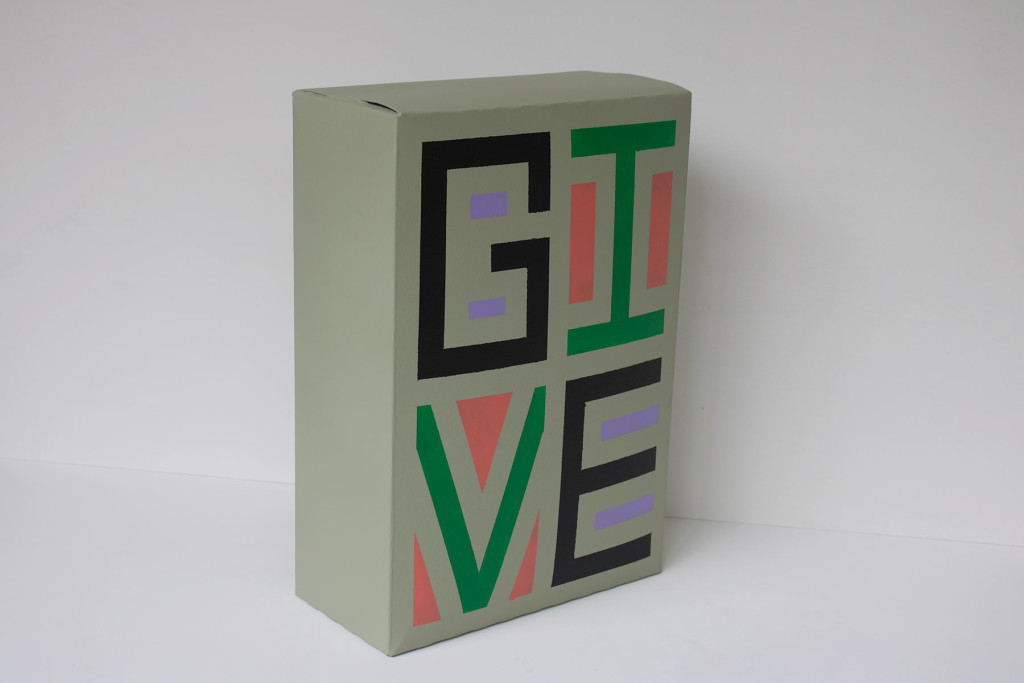 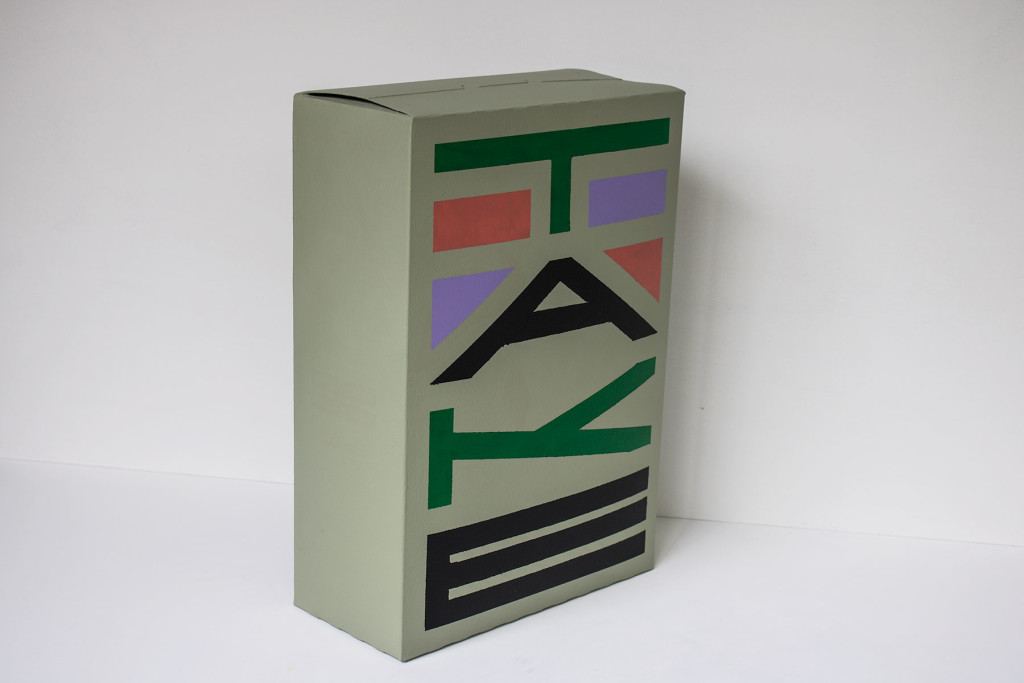 The work is about not over-thinking things, whilst ironically thinking with full force about thinking. However for myself, this was a very strong letting go and stepping into the unknown. The work is light hearted – ‘It’s bin night’ being so pedestrian and yet such a vital remembrance each Monday (the night I painted the work.) ‘We need milk’ gently caressing the form of the work – milk meets cereal and is literally one of the most common texts sent between my Lover and I, between amorous affections. There are words and phrases here, shared between myself and my most beloved beings – liberated from their context, they carry a full charge for me, yet open up to the mind of the viewer, unencumbered by my backstory. There are a few phrases within the series that recount titles of previous artworks – ‘sweet talker’ and ‘opening toward the endless’ essential here as each series of new works tends to embody some form of revisiting oneself. Words come and go, and return and return.

My attraction to the cereal box is primarily for its multiple faces, settling finally on painting the two large sides of each box – a meeting of form and title. The empty sides of the box, act as a frame for the faces of text and assert the objects solidity, it’s thingness. Remaking the boxes in wood, held no charm for me at this point as formally the object of the cereal box itself was what spoke to me as a ground for the work and it is exactly its squishy fragility and its promise of exhaustion and limited life-span that speaks to me so directly. “

Life is neither chaos nor control, not anecdote nor experience. Life is always both sides of the painting, at once and life is the spinning itself. Similarly here, no piece of text is an endpoint. In one of the cereal box paintings seen here – we merely ‘pass through’ thoughts, moment to moment, and we ‘don’t ever stop’ (and I observe this retrospectively now, after making the work using chance encounter, with a text message from a friend ‘don’t stop’ and the words of my Zen teacher ‘passing through’ just prior to making the work.)

Of course the thoughts here are curated, to some degree, despite a desire to minimize this editing. I would have to paint at the speed of light to capture thoughts as they transmit. I have endeavoured to engage with the mundane and the allegorical and let single words hold their own ground rather than always reaching toward more fully formed ideas/sentences, which inevitably lean toward the poetic. I could literally continue this series forever and swap out every work/word here for any other. It is not so much about the meaning of each word, as the multitude of encounters as our eyes or thoughts, pin-ball through the room, from one fragment to another. The work creates a kind of poetry, one of momentary meetings, in discord, then in unison. Words inevitably sing together in a chorus, when left alone in a room. And when we interrupt – each viewer curates their own mash-up (hopefully relating back with some equivalency to the own disjointed chorus of their own mind.) 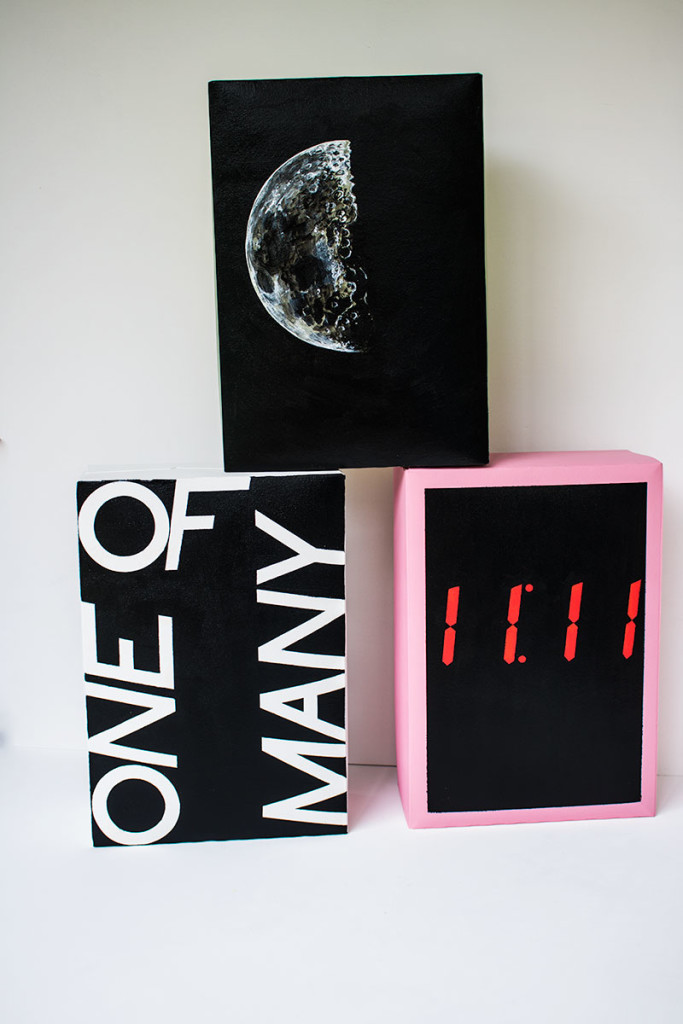 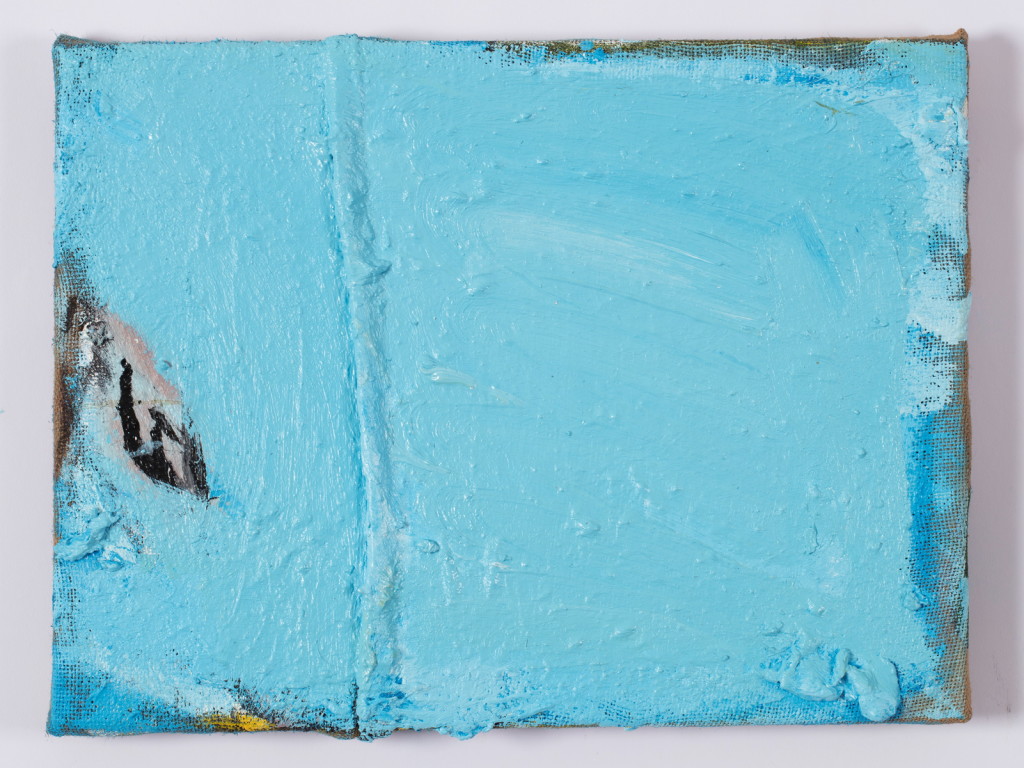 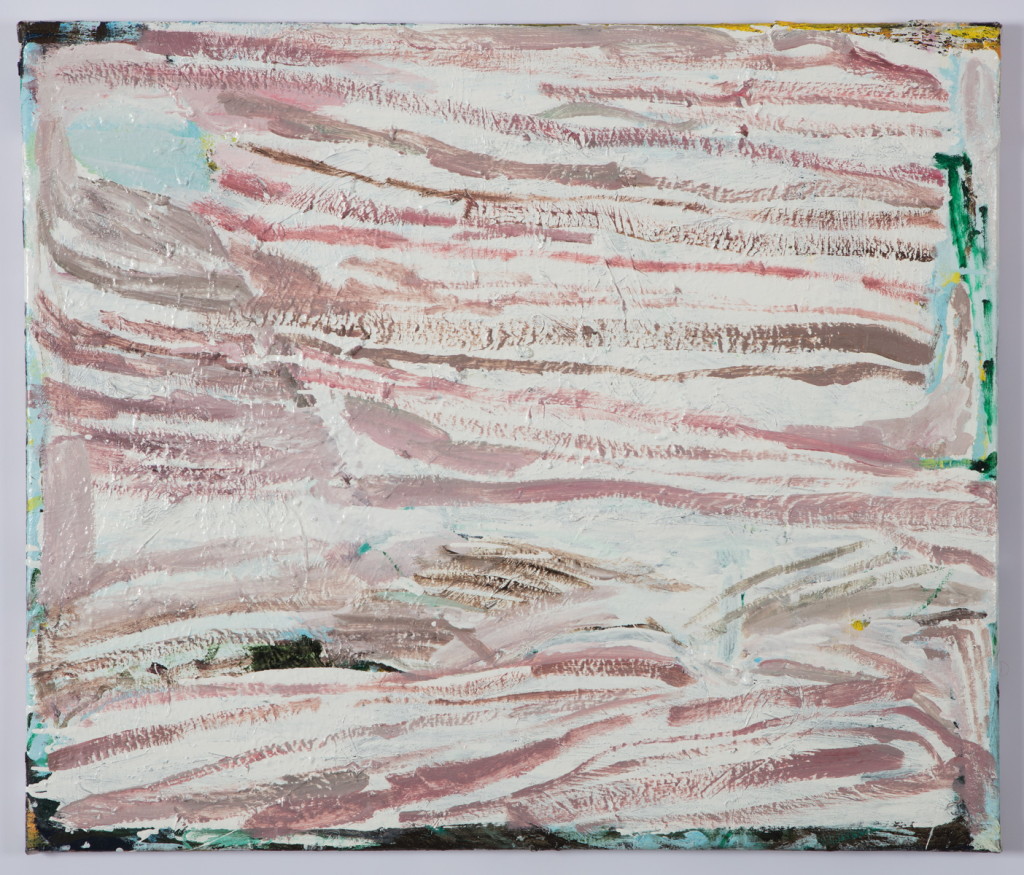 Langour and long looking, successive campaigns of entering and re-entering, covering and uncovering of material and image characterize Teelah George’s practice and the works of Reclining Suite. Incessant teasing out of marks and fibres and threads of the remembered and the everyday are all stitched together in Teelah George’s paintings that reach within and beyond the surface of canvas.

Not just the front, but the spillover, the seams, the edges, the sides are all plumbed for a material history, for an essence of sky or of many skies in one. The periphery and incidental is as significant as any one major incident within her paintings. Vestiges of notations and many remnants over time are overwritten and imbedded within her paintings that are akin to palimpsests

Teelah George studied textiles at art school at Curtin University in Western Australia and there is a legible crossover in her painting practice and more recently in works exclusively from thread as seen in her work for Primavera 2017 at the Museum of Contemporary Art in Sydney.

Hers is a process of considered and slowly layering. Her works are accumulations and evocations of phenomena, mapping traces, weaving sensations and effect. They are the outcome of obsessive delving for her sensual collage of musings and mutations, of researching, teasing out stories, working through…

Each work in Reclining Suite and throughout her oeuvre is a contribution in a limitless ever-developing collage; an evolving continuum and memoir and archive of contemplative painterly notations, moments and renditions of phenomena and findings.

Alchemy is literally the transmutation of matter and Gary Smith’s latest paintings, primarily about paint, do nod to the Modernist Matter painters and their encrusted intense surfaces but are leavened with a fizz of infinity and light-play from tinted poured resin glazes and a mirror ground.

Their intense colour, viscous texture, gestural marks and a collision of optical effects are suggestive of a return to a way of abstract painting begun early in Smith’s career.

His painting path has taken him through sheer veils of layered transparent glazes for poetic celestial evocations of ‘atmospheres’ imbued with diffused light utilising ‘Old Master’ techniques of thinning and glazing, but writ large as pure painting in Smith’s works with their enigmatic Oriental ‘sensibility’ and stillness and silkiness of surface.

His subsequent bodies of work are still aligned with this reductive approach to painting that is distinctive of his oeuvre. Smith’s process of ‘slow looking’ unfolds the reflection of light and generation of surface meaning for both painter and viewer. Perceptions of light and of colour hover within what was often up to thirty layers of glazing and in Alchemy has evolved as multiple campaigns of dredging and scraping a terrain of thick gelatinous oil paint in spontaneous unpredictable, contradictory improvisations onto transparent and tinted mirror-board. A thin poured glaze of colour is the beginning for the layers of oil paint to be applied across the surface. This initial colour influences the progression and range of a muted or hectic pallet to follow.

Gary Smith has a strong interest in music having learnt the organ for many years since the age of 10 with recent focus on early Baroque and the ‘ad lib’ form of jazz of musicians like Keith Jarrett. With Alchemy he is exploiting the process of improvisation and the musicality of spontaneous composition and rhythms of place and put and cadence. His paintings are redolent of the creative rush, the silences, the percussive bang of a slab and slash of dense colour or dappled opacity against transparent riffs across the infinite depths of exposed tinted and lightly glazed mirror. Smith’s interpretative performance follows a given structure, notation and theme but each painting throughout the Alchemy series is a variation that progressively morphs and changes. 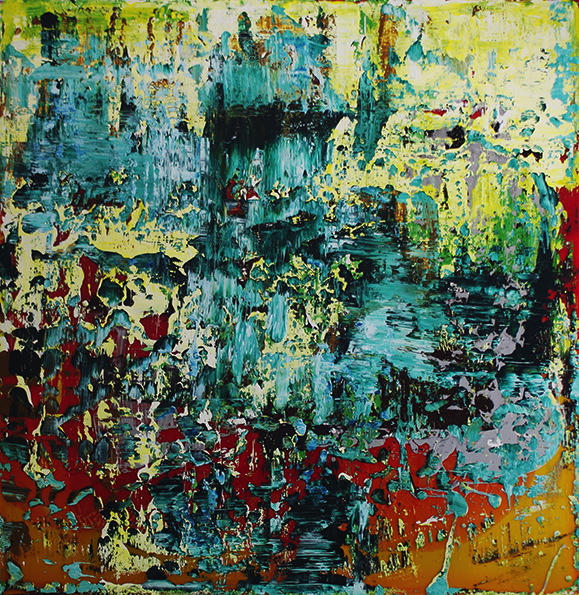 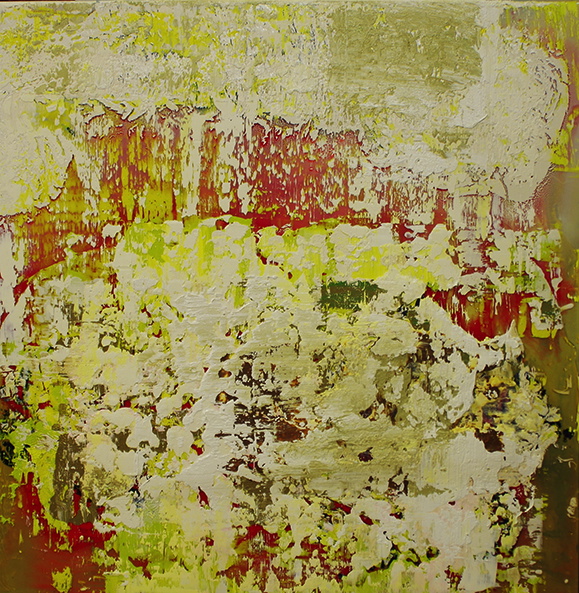