The painted gesture characteristic of the works of Ry David Bradley, the shaped canvas of Daniel Hollier’s meticulous, reductive paintings and the refracted surfaces of Gian Manik are revealing of a range of approaches and ways of painting.

By David Bradley’s Picture Movement body of works were created as he prepared for his recent departure overseas and his paintings winging their way to exhibition. The flamboyance of sky writing, the iCloud, and a reaction to the precedence of keypad and text data communication over cursive writing for a global post internet generation are among a range of societal, technical and art historical influences for Bradley’s embrace of the painted gesture for his Picture Movement series of works, where wispy swathes of soft colour and inky lyrical calligraphic strokes traverse downy expanses of pale suede:

“…The sky, a place once of gods, a subject for Romantic painters and now airlines and freight, is tenuously shared… ‘The cloud’ has been arrested both as a metaphor for data and for environmental change. Messages are written in anticipation of opportunity, beginning to disperse as vapour before completion and arrival. Form is witnessed in the moment of its passing…”

Daniel Hollier’s shaped canvases are meticulously made and theoretically and conceptually dense and considered. The articulation of the edge distinguishes Hollier’s paintings. By shaping the canvas into irregular geometric forms, Hollier seeks to liberate painting from its conventional frame – while at times subversively incorporating a version of a modified frame, picked out with colour or texture, or merely suggested by masking, as an integrated element of the painting. 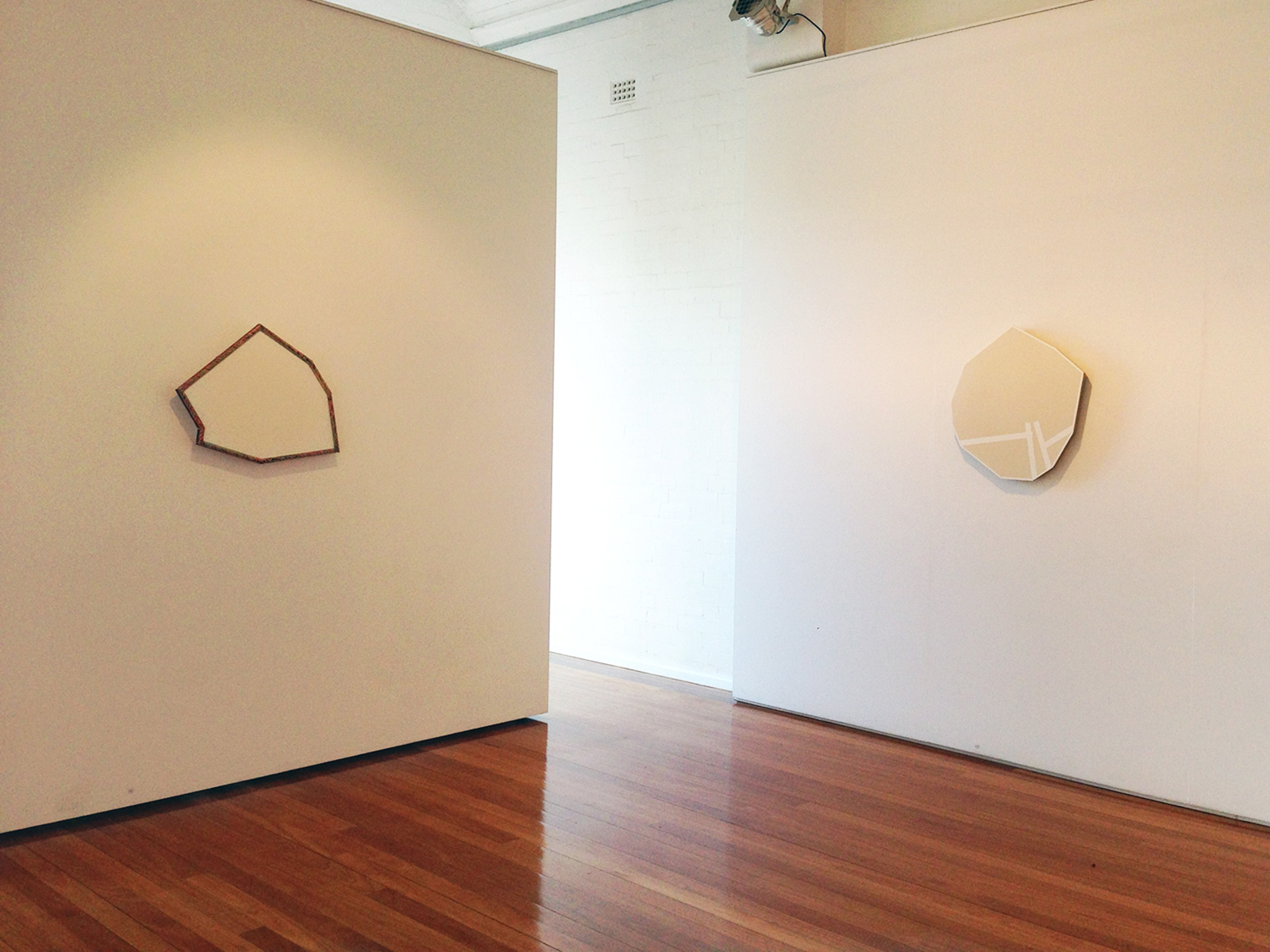 Hollier’s ‘sculptural’ paintings engage with the artistic traditions of the ready-made, of hard-edge abstraction and minimalism. The works are an investigation of painting; of surface, support, colour and the processes and the experience of making. Slowly built up over time using thin layers of paint to create smooth, colour saturated surfaces, the paintings are made using a combination of acrylic, gouache and spray enamel on linen and polyester with cedar timber frames – heightening the relationship between “high art” and “low” materials and the artisan and the artist.

Hollier refers to his paintings as “narrative abstractions” as their creation tells a story of his engagement with chance encounters, with found objects and his ‘everyday’: “…walking to work and something captures my eye. It’s small and insignificant but it grasps my attention. I arrive at the studio, I draw it onto a piece of paper. I start to test the possibilities. I start to imagine it at a greater scale. I draw, plan and start to calculate: size, angles, colour, texture. Painting begins with rule, saw and sander. I work its edges, its surface. Stretching. Sizing. Stapling. It’s a search with no end until it ends.”

Gian Manik’s preoccupation is with the language of representation. Paradoxically his paintings are apparently abstract with their fractal style of repeating geometric patterns. Manik employs visual devices and conceptual ideas that borrow from both the abstract and the real:“Fundamentally, painting explores the language of representation. … The specific aim of my practice is to investigate how painting the concept of vibration operates in representation. Visually the paintings are of the subject of the mirror, translated through fabrics or other more plastic or fluid reflective surfaces, to tackle the idea of ‘mirroring’ representation and translation of image into painting.” 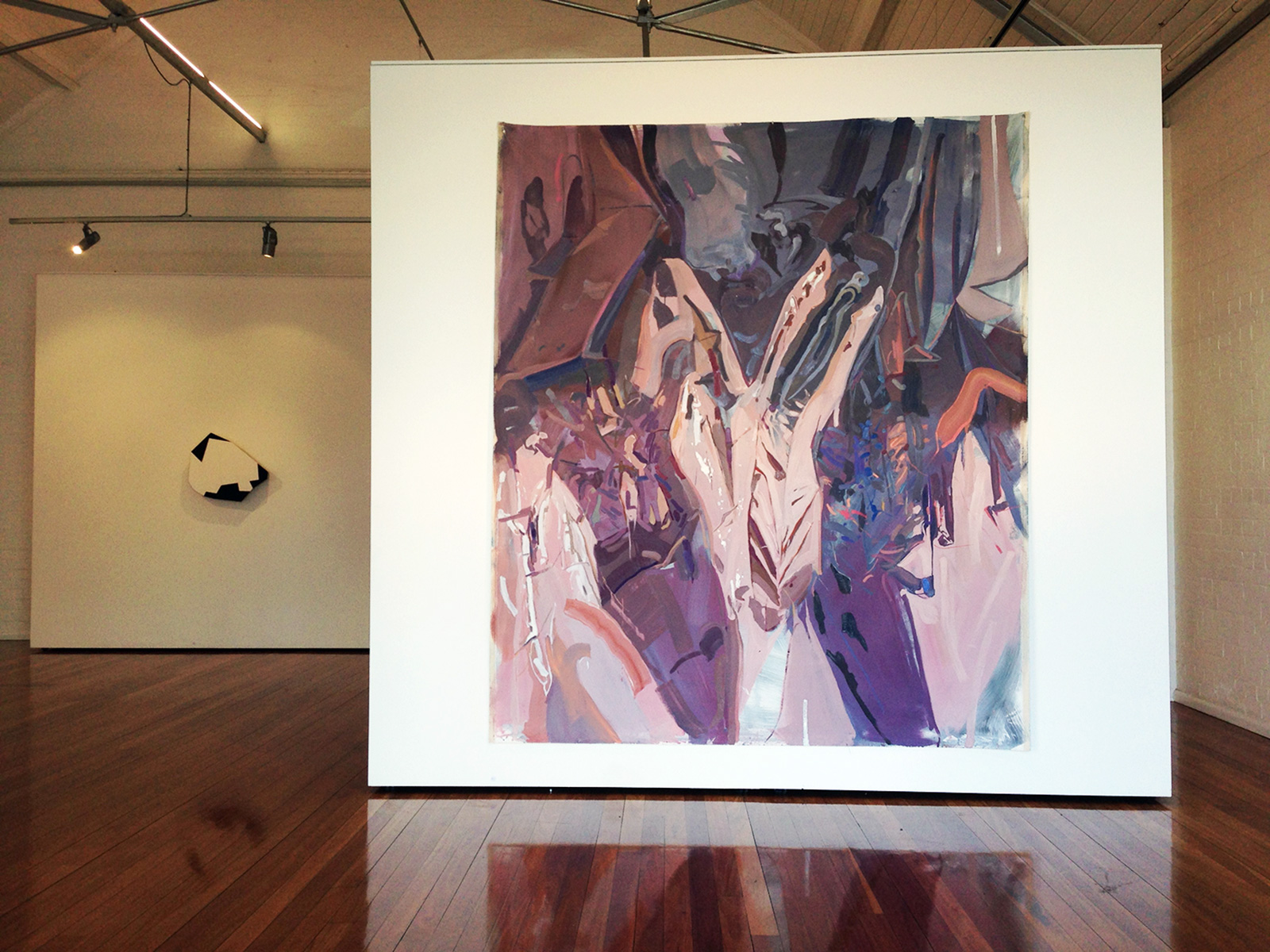 Manik achieves this through a coalition of photographs of abstracted surfaces that he then renders true to form. Metallic foil is the source material for Untitled 2, Manik’s large-scale realist rendition of an image of the crumpled foil that he photographs in a range of different lights and translates as an oil painting. The artist describes his practice as an “… attempt to uncover a way to discuss contemporary painting as a tool to re-present the image, rather than to reproduce”.