The works of Camille Hannah and Michael Staniak reflect the influences and language of painting of the twenty-first century technological environment. Their paintings, as sites for the enactment of a pivotal moment, allude to the process and that transitory stage of creating and capturing an image in the digital age.

Despite the technological impetus, their works are undeniably paintings. They are tactile, voluptuous, gestural, and Camille Hannah’s are cinematic in scale and concept. The artists acknowledge, exploit and celebrate the viscosity of the paint medium and the emotional qualities of colour while expressing and articulating the process, the interstices, the moment and the momentum of generation of an image.

Both deny a figurative outcome. The works are abstract in essence. Neither artist uses the more obvious pixel based imagery to express their concepts. The paintings have a twenty-first century sensibility and are vested conceptually in technological processing while both artists mine twentieth-century art history movements and influences. In Camille’s works, the gesture, the scale of the body, the sweep of the arm, the creative performance is evident and expressive of spatial and temporal transference. It is as if she has hit the pause button and recorded creation in mid process; rupturing representation, and giving us a view from the inside looking out. 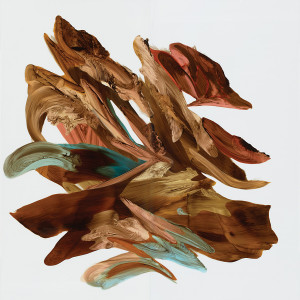 Camille Hannah’s three large-scale works are from her recent series Stutter Speed. The paintings on aluminium are face-mounted to Perspex. This is a presentation format favoured by photo-media artists for their digital prints and gives Camille Hannah’s paintings the surface sheen and gloss, the lustre and luminosity of the screen or lens. Light is integral to her practice:

“My paintings attempt to evoke the simultaneous presence of real vistas as well as cinematic ones, drawing upon the history of painting as an act of quotation, where one can find depth in a ground revealed by the twist of a brush, a void which divides the surface whilst continuing beneath what it divides – up close. Interested in the photographic aesthetic that harnesses a unique experience of light, my paintings have an ability to suggest movement yet with light’s imperceptible speed; a relationship between painting and digital technology that is one of seduction rather than production.” Camille Hannah 2012

Michael Staniak ‘s marks recall the ‘push me – pull you’, stutter, interruption and pass of the printer and the momentum and the blur of processing high-keyed colour at speed or as the velocity merges black and white merge to grey. He identifies his works with titles of ‘IMG’ and subsequent numerals in the way of identification utilized by photo-media image capture software and fittingly encases his impasto works in steel, round-cornered frames consistent with the window edge of computer software.

“The paintings focus on industrial processes and methods derived from digital imaging – from compositional elements, glitches and colours, to methods of output such as inkjet-printing or screen-printing. I avoid evidence of the hand and at the same time stay away from the cliche language of the pixel as a digital signifier. I feel the pixel has been over-used in painting to describe the digital. New imaging is becoming so refined it may ultimately obliterate the pixel from the image altogether. Artists in “The Painting Factory” at LAMOCA, curated by Jeffrey Deitch are all considered painters however some don’t even paint, like Wade Guyton who only uses a digital printer. Traditionalists may be angered, however there is no doubt they are the most current and forward thinking forms of painting, reacting to current methods of commercial image making. This epitomises all that my works explore. 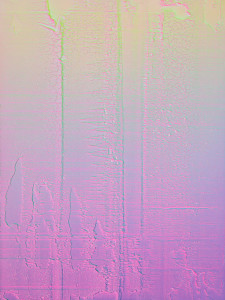 The way I paint involves me thinking about and experimenting with mediums and process. Content is secondary. Put differently, the content is a result of the mediums and process – sometimes I have control, others I don’t. There is a similarity in using programs like Photoshop, where you can control what you’re doing but have no control over the parameters already set by the program. It is important for me to use materials and methods that are non-traditional in painting when speaking of technology and trying to emulate a language rooted in technological and digital developments. The work itself is actually content-less. “Colour fields” and textures exist that allude to Modernism and Minimalism, however are borrowed from the digitised as well.

My recent works have also developed from looking at “digital painting” created on platforms such as MS Paint or Photoshop, using computers and touchpads or even iPhones. These digital images are structured to be painterly, therefore becoming kind of faux Modernist or Abstract-Expressionist works. The most interesting thing about these images is that they come across as kitsch and out-dated and at the same time they are extremely current. The technology, colours and techniques used are cutting edge, as an example the works developed on the paintfx.biz website. However, the images themselves have an element of nostalgia, repeating the visual language of Modernism with no end. It seems that what is “painterly” is expressed in abstract forms. This juxtaposition of pop-kitsch and cutting-edge technology influences my paintings greatly. They may have some similar elements to German artist Anselm Reyle’s works that balance different Modernist elements with cultural or pop iconography. It is difficult to avoid pop culture altogether in art. Now with the use of things like social media, most art forms have been absorbed into popular culture or mass circulation in some way.” Michael Staniak 2013