Artist talk at 3pm on Saturday 7 March, at Artereal Gallery. As part of Art Month Sydney 2015

“I’ll never know what it is like to be black; and I am struggling to understand what it is to be white.”

With its indigenous heritage, British foundation and multicultural character, Australia in the twenty-first century is a hybrid nation. The charged issue of ‘Anglo’ anxiety, a condition that is as much about the present as it is the past, and how multiple identities define themselves and interact within contemporary Australia, is the focus of Liam Benson’s art: “I am making work about being Anglo Saxon, yet where I find most inspiration is with fellow contemporary urban Aboriginal artists whose work is also reflective of my quandary.”

Self-performance is at the heart of Liam Benson’s visual arts practice. His body is a site for enactment, for conjuring identities born of experience, observation and imagination; for making and unmaking of meaning. Performance is his way of outreach and sharing his empathy, of exposing, and of finding a way through our conflicted colonial histories and our every day. His approach is both elegiac – a lament, a funeral song, and also a paean, a song of praise; his version of “I’ll ride with you”, the social media led response that evolved with the Martin Place siege in sympathy with burqa clad Muslim women.

It is through the physical act of performing and in making related studio objects that Benson facilitates his self- examination as thinker and provocateur, of what it means to be a white, ‘Anglo’, gay male in Australia in the twenty- first century.

Studio-made objects that are quasi artefacts, and photo- media images that document and activate perceptions of power relationships offset the ephemeral aspect of his performance medium. The making, the meditative art of embroidery, the stitching a time for contemplation, is a way for Liam Benson of expressing, assimilating and of working through and understanding his own position, ideas and experiences – of opening him to the interaction of black and white, the reciprocity of that relationship, the many conversations. Of getting inside what it feels like to be in another’s skin, the psychology and politics, the exoticism, the intimacy – what it is to be kin. 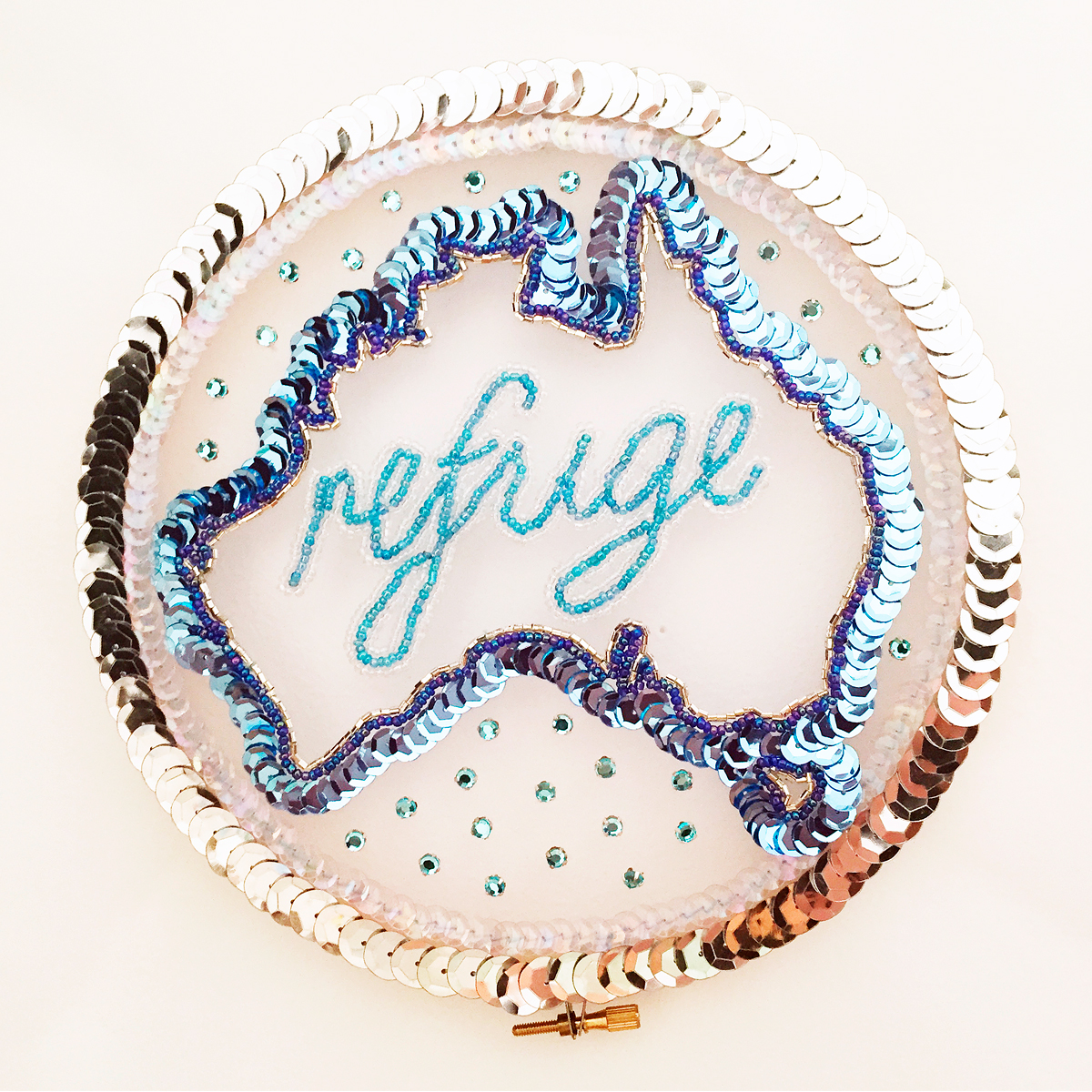 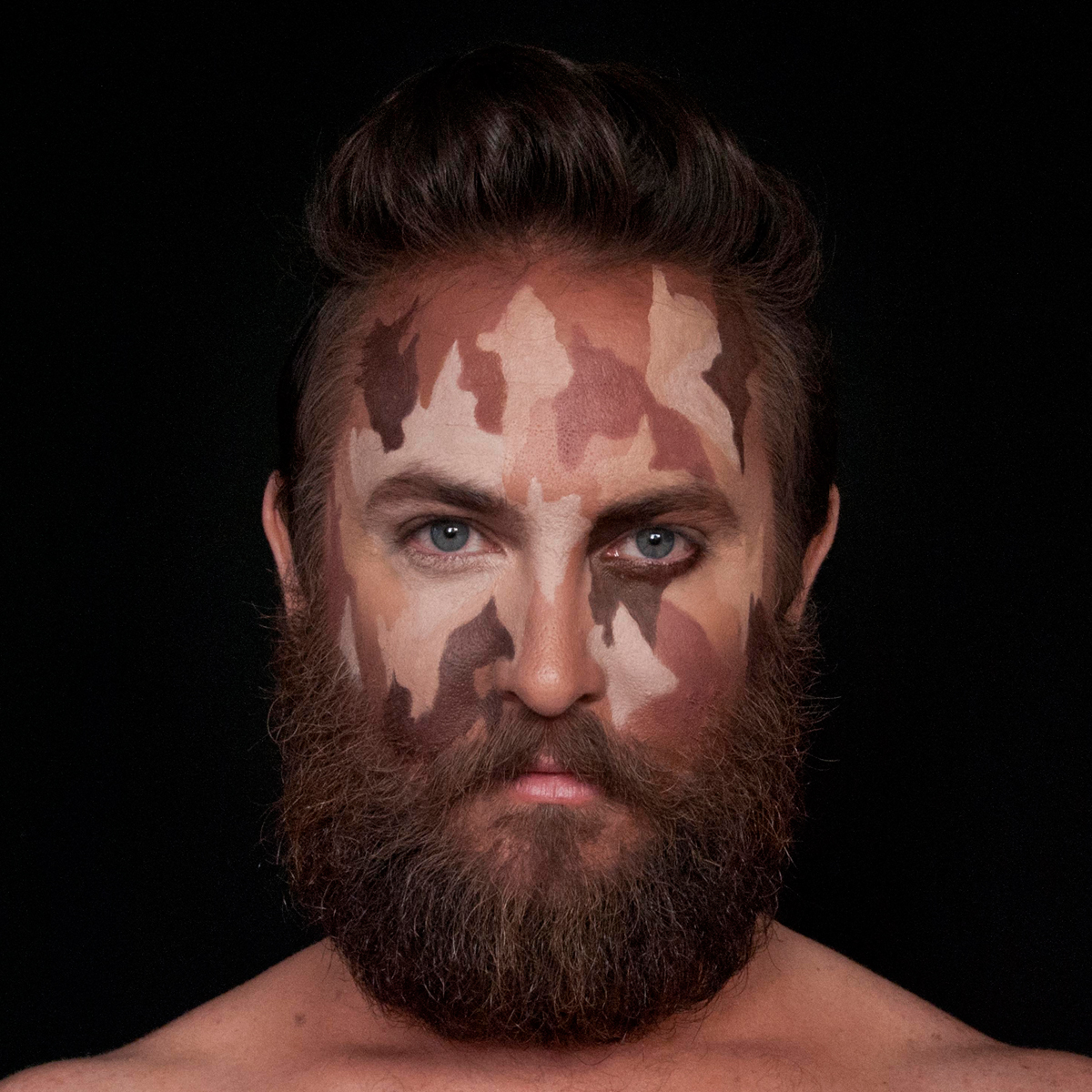 Benson draws on archetypes for his Noble Savage portrayals of duality and masculinity. The language of the beard is loaded for a whole spectrum of masculinity from metro-sexual to terrorist. Adopting today’s hirsute facial fashion current among young men, the usually fresh faced, clean-shaven Benson has grown a beard for Noble Savage in a style after that of iconic Australian ‘wild colonial’ rebel Ned Kelly .

The Kelly personae is guise for a series of headshots of the bearded Benson with his sentient penetrating blue- eyed gaze seeking out the viewer, his face painted in ‘camouflage’ patterns devolved from the barks of native species of Australian Eucalypts from a hyper-coloured Red Gum to the ghostly White Gum. Prescient choices in which the natural and the cultural are interwoven; the landscape is deemed integral to our Australian identity yet also perversely the basis of military uniforms and camouflage paraphernalia in zones of conflict. Benson’s potent exploitation of irony is further evident in his particular use of camouflage for examining identity. And while acknowledging the place in indigenous ritual of body painting, his ‘make-up’ box of eye shadows and foundation is this artist’s white man’s material for rendering ‘birth marks’ in his construction of masculine identity.

A trio of power archetypes; The Executioner, The Crusader and The Terrorist are counter to the ‘Kellies’. All are hooded, yet identifiable by their iconic headgear. Benson portrays their garbs, their trappings, their sinister veneers as no longer opaque and concealing as is the custom but as seductively beautiful, yet still intimidating.

The works and ideas in Liam Benson’s Noble Savage exhibition are manifestations of the many and complex voices in the continuing and diverse conversations relating to Australian identity.