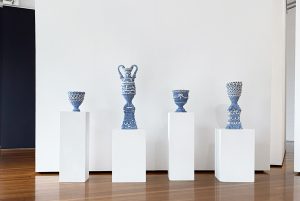 What all of these artworks have in common is a predilection for intricate patterning and rich colour. A love of ornamentation and embellishment. A flair for either dramatic flamboyance or baroque detail. Mining the canon, each of these contemporary artists has created something that is both enduring and neoteric. They are artworks that pay homage to many previous art historical moments whilst also turning these moments on their head, mashing together a bunch of references, and creating something fresh, unique and (at times) rebellious. 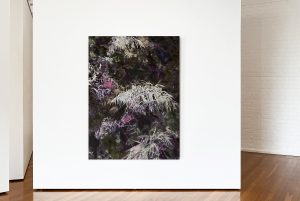 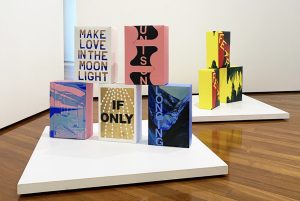 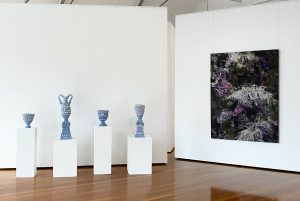 Evoking the meticulously wrought detail of a Pre-Raphaelite painting, Sam Holt’s artworks could be seen as indebted to a moment in art history when the natural world was celebrated through minute attention to detail and realism. Transplanting these ideas into a contemporary art context, Holt has zoomed in and taken this hyper-realism and painstaking observation of nature to the next level. And yet… these same artworks can also be seen as blurred and sketchy, semi-abstract and romanticised.

Ebony Russell’s recent series of ornate ceramic urns and vessels were made in direct response to a number of historically significant Wedgewood ceramics pieces held in the Museum of Art and Applied Science’s permanent collection. Commissioned for the institution’s current mega-exhibition ‘Clay Dynasty’, Russell was invited to select works which spoke to her personally from the museum’s permanent ceramics collection and create new artwork in dialogue with these pieces. The incredible artworks spawned by this invitation are pregnant with references to the Baroque and Rococo. And yet for those familiar with Russell’s ceramic practice, the works are also quintessentially her own and undeniably rooted in the present moment.

Ebony herself sums up this tension best when she explains:

“My purpose was to make pieces that would sit within the continuum of the ceramic vessel tradition, a practice unbroken for millennia. These hand-made objects contradict their own making in that they are not touched by the hand but are piped using a tool which acts as an extension of myself. They are equally informed by the skills of the traditional potter and the modern process of 3D clay printing.

In my current art practice, the techniques and processes traditionally used in cake decorating have replaced ceramic techniques. The saccharine embellishment and delicate layers are intensified and given permanence with the use of high-fired porcelain. The specially prepared porcelain is slowly piped in layers building up the curvilinear form. The ornament itself becomes the structure, undermining the intention of decorations original purpose. Creating sculptures that appear to defy their own making. I embrace the decorative, disrupting the boundaries and hierarchies between high and low, art and craft, structure and decoration. Making in this way feels like magic as if the piece forms itself from my wand like tool.”

In much the same way that Ebony Russell’s work owes a debt to the Baroque and Rococo movements, Elwira Skowronska and Lionel Bawden similarly draw on Baroque-like patterning to create intricate works of heightened beauty.

In Elwira’s case we have a series of artworks that give the illusion of endless depth and offer an imaginary portal into the sublime experience of the minute and unseeable realms of micro-biology.

In her own words the artist explains:

“Grounded in an artistic tradition that investigates the visible world by breaking it down into its smallest components, my works takes inspiration from the neo-impressionist paintings of Georges Seurat, who investigated the chromatic foundations of pictorial space, and the contemporary digital art practice of Ryoji Ikeda, whose work navigates the nano-scale dimension of particles. By integrating these approaches, I work to transform painting, printing and video into multi-coloured and multi-dimensional spaces characterised by an optical complexity. Evoking an infinity of physical and virtual minutiae that are invisible to the naked human eye, the end result is a body of work that expands the conventional understanding of infinity as a large-scale sublime space, revealing instead the micro infinity that underpins our visible world.”

Also working with the transformative power of pattern, Lionel Bawden is known for his signature sculptural works made from myriad undulations of Staedtler hexagonal coloured pencils fused together and carved for cryptic amorphous objects that transport the everyday source material beyond the known and commonplace.

Included alongside his seductive and mysterious pencil sculpture, Bawden is also showing  artworks from an ongoing series which embrace both painting and sculpture. Titled These Consuming Emotions, Bawden fancifully and perversely transitions the humble, off-the-shelf, limited life packets of cereal – the sites of so many morning musings from quotidian consumer objects with use-by dates – transforming them into vehicles for the artist’s aphoristic insight and philosophizing on the randomness of thought and the nature of dualities.

Although they hint at conventional ceramic forms, Luke Ryan O’Connor’s works alludes to an alchemical and experimental process during which the traditional vessel has metamorphosised in to something else. Cryptic, mysterious and alluringly tactile, each piece is an embodiment of something simultaneously familiar and unfamiliar.

Confectionery bright and blindingly seductive in their strangeness, Luke Ryan O’Connor’s vessels are dripping with a gaudy sheen, dolled-up in metallic drag queen glitz of gold and platinum lustre, dressing up and texturing the curves and surfaces of his otherwise conventional wheel thrown vessels.

And finally, we come to the work of fast-emerging Sydney based artist Taylor Steel. Focusing in on moments of decay and abandonment from her everyday surrounds, Steel nonetheless has a way of finding and capturing decorative motifs (patterned wrought iron, a cropped vista of flowers) hidden amongst the grit. Grounded in traditional printmaking, Taylor Steel harnesses a kind of alchemical magic, warping and wefting everyday imagery to create artworks which reimagine quotidian snapshots from suburbia, steeping them with a sense of mystery and allure.

United in their love of decorative ornamentation, intricacy and attention to detail, here we have a group of artists who are in no way afraid of being OTT…

All prices are in Australian dollars and inclusive of GST. Freight and shipping costs not included. Please contact the gallery for assistance with freight. Prices are correct at the time of publication but may be subject to change without notice. For sales enquiries email: info@artereal.com.au

I remember not wanting to leave. I'd been there for some time, though walking away I found myself already savouring it with longing. Similar to having that last bite of a great meal I'd slowed it all down, downloading every aspect of my present.

Alone in that forest I stared, entranced and swelling with an overwhelming full body grin of appreciation for the simplicity of it all. These rarities thinking back only ever occurred when I gifted them all my curiosity and time.

Superfluous: Blue with Swags on Pedestal

These Consuming Emotions (IF ONLY)

These Consuming Emotions (MAKE LOVE IN THE MOONLIGHT)