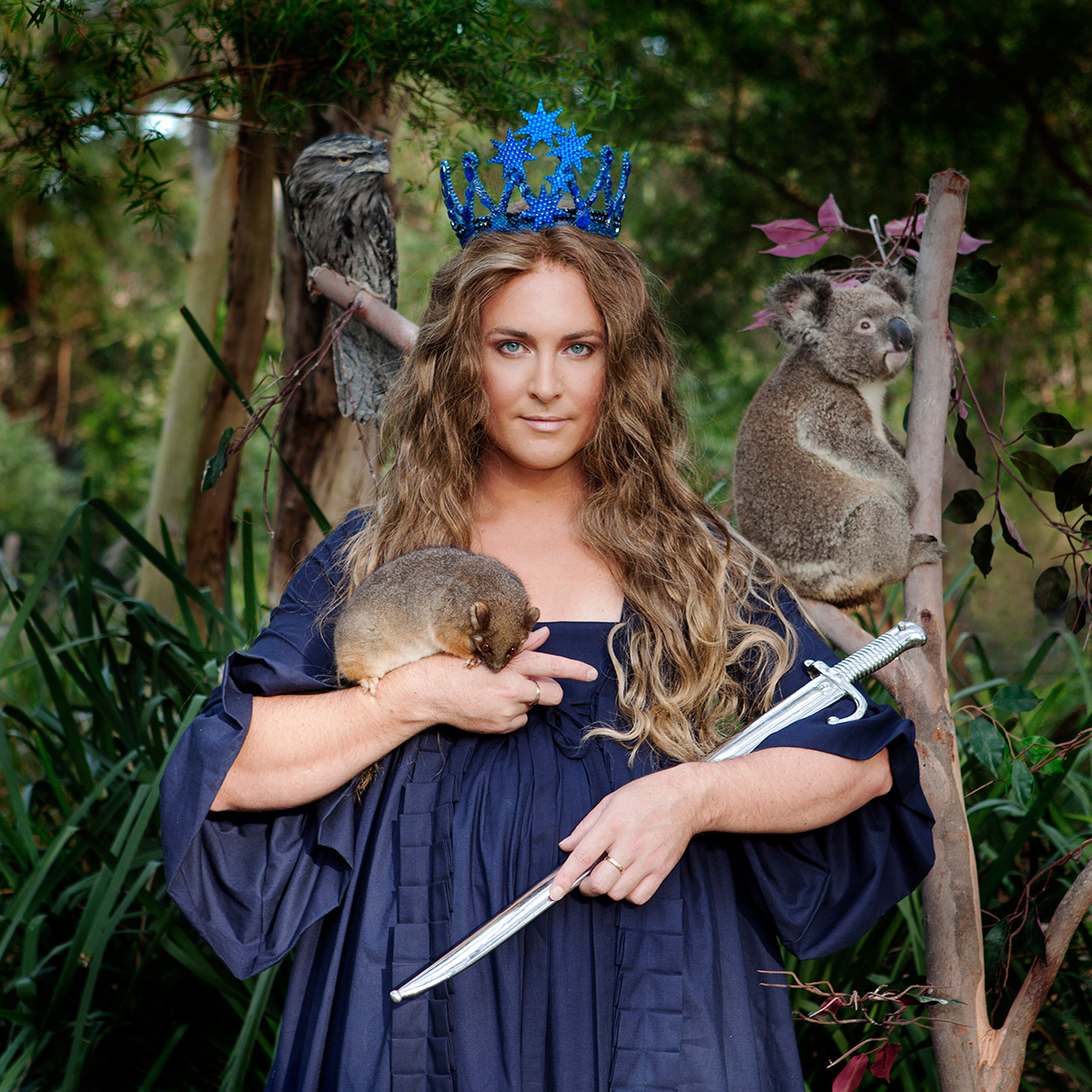 Motherland is performance artist Liam Benson’s social and political commentary on identity and nationhood and the alliances of monarchy, motherhood and masculinity.

Liam Benson uses queer identity to gently subvert social perceptions of gender, race, culture, sexuality and national identity. He mines the visual language and communication formats of advertising and popular media to document his performances as both still photographs and video for a form of contemporary myth making. Liam Benson’s Motherland is timely in its alignment with the sixtieth anniversary of the reign of ‘Elizabeth II. The subtext for his work is the idea of ‘letting go – you are strong enough now’; acknowledging what is past; a way of ‘saying goodbye’ to an awkward but inescapable relationship. 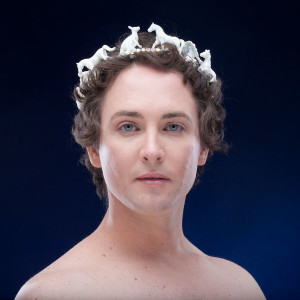 Large-scale digital prints and videos depict Liam Benson as metaphorical ‘royal’ identities in fanciful guises and contexts and imbued with romance and mythology. His gaze is direct. He looks straight at the camera lens and the viewer – not quite a challenge but steadfast; in keeping not only with the persona of his performance subject but importantly his own self belief as well as a gender political stance. Heraldry is a recurring theme and the artist subversively plays with coats of arms and symbols of office.  Animals as traditional heraldic motifs are made more meaningful. Native animals signify connection to country, to the original Australia, while the horse, an introduced species, is associated with Australian colonial identity, and our links to the settled land.

Mary is pregnant, long-haired and beautiful but at no pains to disguise her meaty masculine forearms and is photographed with a veritable real life coat of arms, a koala and possum against a Utopian Australian landscape of eucalypts. The paradoxical Mary is at once a descendant from a historic lineage of Queens Mary, resembles Carrie from Sex and the City and ‘channels’ the contemporary young royals. She is redolent of the next generation, a new hybrid Australia, with which Australians can identify.

The Motherland series of multi-faceted performance and photo media works is Liam Benson’s first major solo exhibition with Artereal. Liam Benson has been exhibiting and performing since 2002. Benson also regularly works in collaboration with Naomi Oliver as the performance based duo, The Motel Sisters. His works are held in significant public and private collections and he was recently awarded the Hazelhurst Art on Paper Award judged by Ben Quilty and the Contemporary Award in the Fishers Ghost Art Award judged by MCA curator Glenn Barkley.

It is emotional as well as political. While focussed on a longing for homeland, for motherland, it is part-filtered through the lens of nostalgia as a tender personal reflection on male identity within the idea of matriarchies and of motherhood. These works coincided poignantly with the deaths in late 2011 of both the artist’s mother and grandmother whose adult lives also spanned the reign of the current Queen. 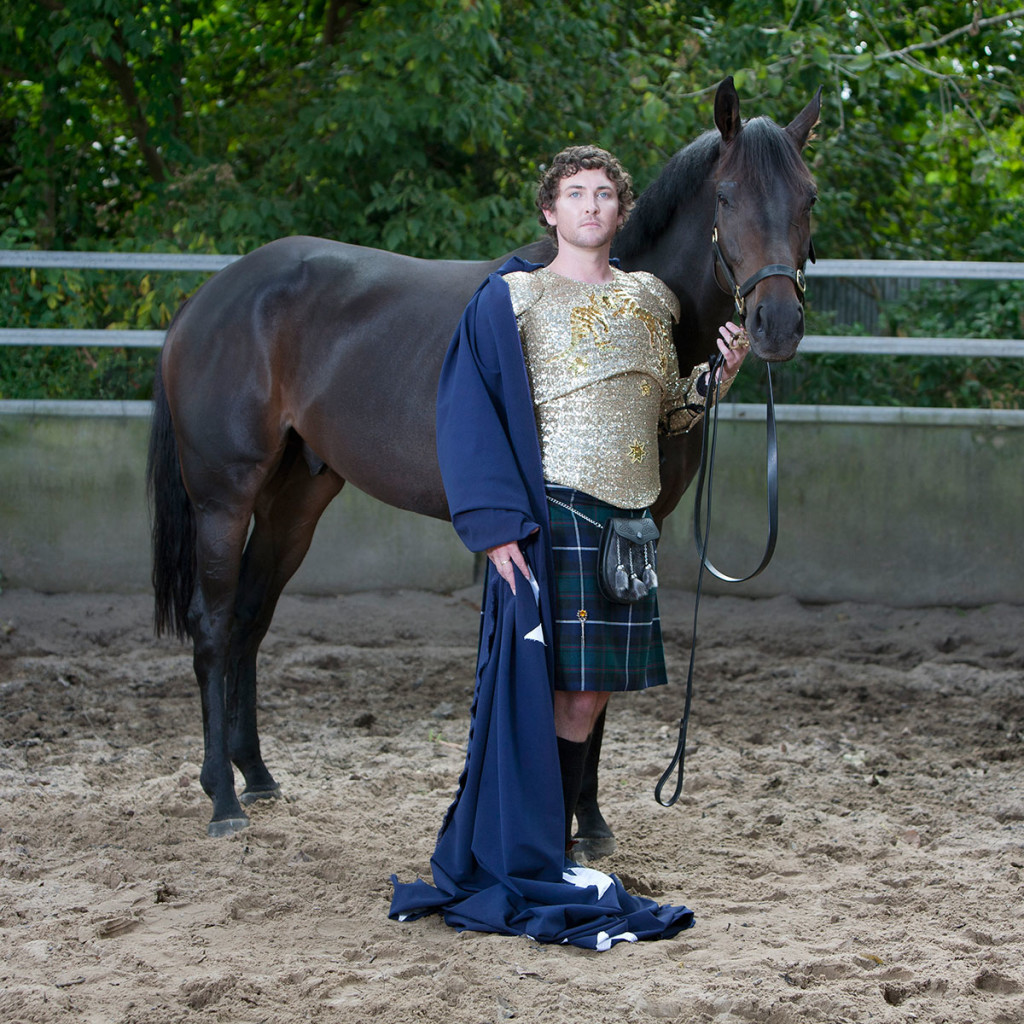 Elizabeth, is posed as a ‘Queen of Australia’, wears an opal coronet adorned with coats of arms, each with an Australian native animal – koala, frill neck lizard, kangaroo, Tasmanian devil, wombat, platypus and crocodile facing a horse. Elizabeth is in soft light, young, vulnerable and on the threshold of a sovereignty that is now waning and embodies the past for the artist and nostalgia for his mother’s memory. Mary is multilayered, ambiguous, and representative of both past and future. Her dress and bric-a-brac tiara are in a style consistent with 1788. She holds a ceremonial sword of office – or is it symbolic of cutting ties? The dress is indigo, the blue–black colour of the bowerbird, an Australian species where the male builds the nest and sits on the eggs.

The Gold Knight, standing beside his steed, wearing a kilt and lavishly embroidered gold doublet with a flag falling from his left shoulder embodies a dual identity – at once warrior and ingénue; masculine with a feminine side. The knight, bold, strong and ceremonial and the stable boy (simply the knight without the armour), emotional and intimate, express the transitional aspects implicated in cutting ties and embracing a new identity whether it be national or personal. The figure embodies the need to be confident in the new self, stand strong and be assertive on the one hand while being in tune internally and emotionally with the process.

Liam Benson would like to sincerely thank Jasmine Robertson and Naomi Oliver for their efforts in producing the photographs and video for the exhibition. Liam would also like to give special thanks to Joan Pracey and Tanya Barend for their warm reception at the Pracey Racing Stables and being able to work with the spectacular race horse ‘Cash’. Liam also wishes to thank the staff of The Australian Reptile Park, in particular Dean Reid for his expertise in assisting with the beautiful native animals.