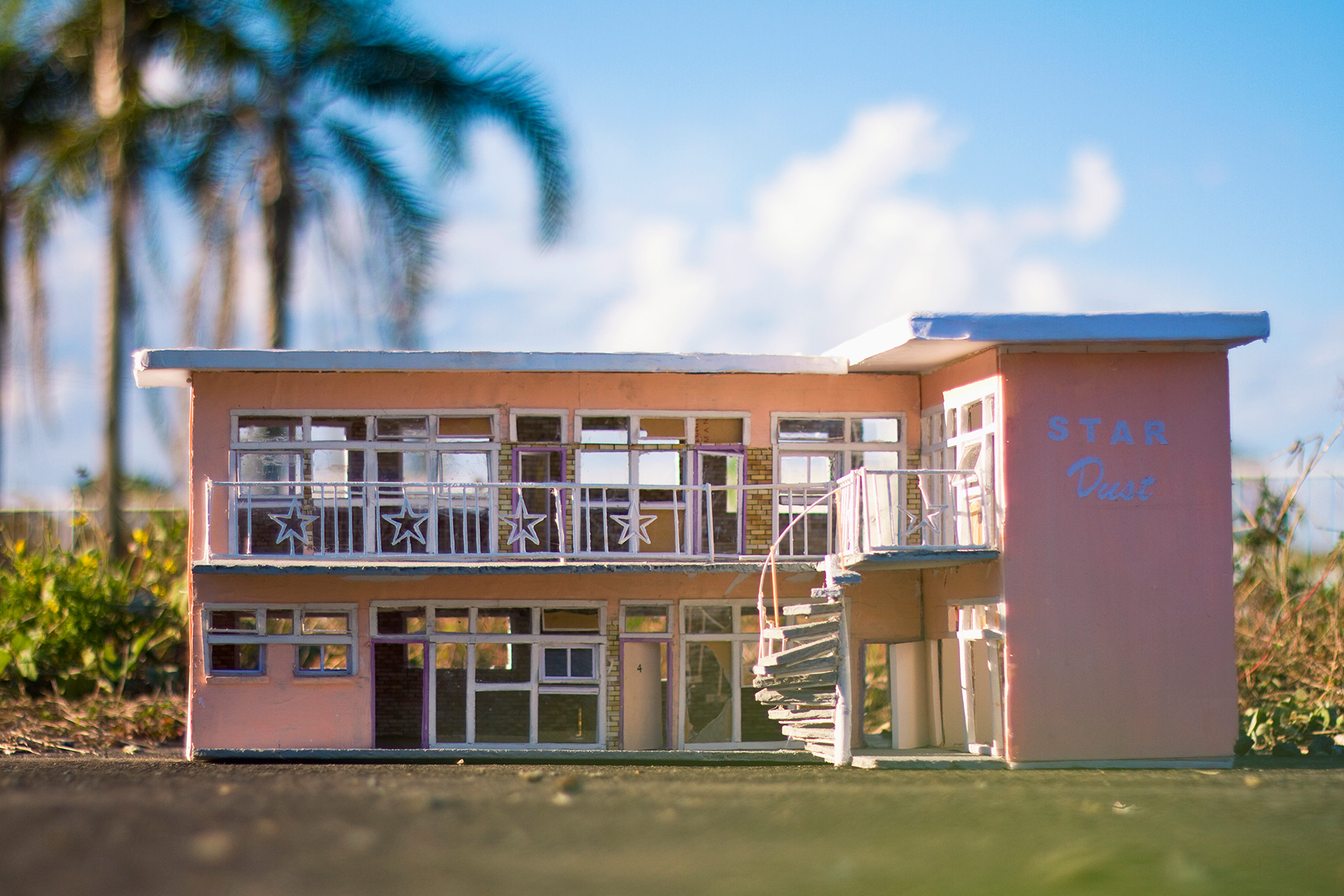 Anna Carey melds memory, model making, and photo media to create a heightened awareness of both the physical and the psychological aspects of space and of place.

Throughout her art practice Anna Carey focuses on architectural spaces as a medium to open up an imaginative realm for the viewer. She employs fragile cardboard constructions, documented in video and photographs to express and access the psychological sensibility beyond manufactured physical façades. Mirage reveals the voids, the private interior spaces, the fictive imagined places in that paradox and modern pastiche of a city, the Gold Coast where Anna was born and has lived for more than two decades. Its connotations of aspiration, fantasy and escape, along with a veiled sense of illusion and displacement, are shared with other such frontier cities as Los Angeles and Las Vegas. Each is poised on the edge of elsewhere in both a physical and emotional sense. Anna Carey’s works are an amalgam of retrieved memories. She captures the blenched light associated with remembering; the languor, the somnolence of daydreams.

The artist’s way of working is to make a collage of generic spaces, and ‘real’ spaces filtered through memory. While memory can presuppose past and loss it signals the present and endows identity. Memories are ordered and marked in relation to spaces, but are also selective and fragmentary. Equally important are the gaps, the voids and disconnections, the in-between spaces. And as significant are the ‘not seen at first glance’, subtle but intentional, imperfections in Anna Carey’s images. In this way she seeks to preserve the process contained within the creation of these spaces rather than focusing on the finished model. Her video work and photographs are documents that capture the imaginative space as well as imagined spaces.

The Gold Coast has a distinctive casual, almost insubstantial tropical architecture – structures that are there for a short time, not forever, in a flux of relocate, renovate and redevelop. It is a city, like many, that is never resolved, always re-imagining itself.A flat roofed, shed aesthetic of light-weight fly-away materials with as much metal cladding, weatherboard and glass as there is brick or stone prevails. Colours are light, bright and white, pale and pastel. Low, separate dwellings are side by side with soaring high-rise and cardboard condominiums and set amid low growing vegetation punctuated with sentinel clusters of ‘party popper’ palm trees and swimming pools – despite the nearby beaches.

The crescent moon signage of apartment block Pacific Moon, alludes to the ‘off-shore’ source of its investors. Set on a stubbly dune, Sea Mist, its door and louvres wide open, is an unadorned, not quite finished, pitch-roofed fibro shack with an air of neglect or unconcern. It recalls earlier, easier, lazy languid days. The stuff of daydream – or is it lost dreams? Crystal Pacific too bears signs of the wear and tear of sun, salt, wind and sand but enhanced by the ingenuity of an owner-builder adding a bit of Gold Coast glamour with sheets of possibly recycled, diamond faceted cladding on the end wall. A golden era of nostalgia is implicit in the demeanour and name of the early Queenslander, Golden Palm.

The video, Flow, has a haunting sense of mystery. It is an interior space, a psychological space with no fixed destination, meandering, languid, and suggestive of a hazy childhood memory or dream. The video work presents an unconventional ‘implied’ narrative to reflect the time, the structure and rhythm of the city glimpsed and heard beyond and separated from the languor inside. The video takes you on a journey with no fixed destination, unresolved, meandering, to no finished space or place. The work slips in and out of the subtropical coastal natural environment and the fragmented urban environment, bringing together the sublime experiences of nature and the illusions within architecture that are at the core of the lived experiences within the tropical torpor of the indolent Gold Coast city.

An original score and soundscape by Joel Caust underpins a montage of the models interwoven with an eerily slow, dreamlike often jerky, tracking progression through the untenanted interiors creating an almost “Hitchcockian” sense of anticipation and suspense. A soft late afternoon light is the only illumination. Anna Carey shoots the still photographs outdoors, lying on her stomach with a 50mm lens which selects out the model, while the rest – the sky, the sea and the landscape and vegetation detail is blurred and out of focus. Shooting the video is a little like being clumsy Alice down the rabbit hole as she enters another world to conjure these fantasy spaces.

Her model making started as a study of spatial practices at art school with Alfredo Aquilizan as her teacher. The photography developed as a means of documenting space. Since graduating from Griffith University in 2010 Anna has been awarded an Australia Council Emerging Artist New Work Grant and her works acquired for the collections of Artbank and The Gold Coast City Art Gallery.