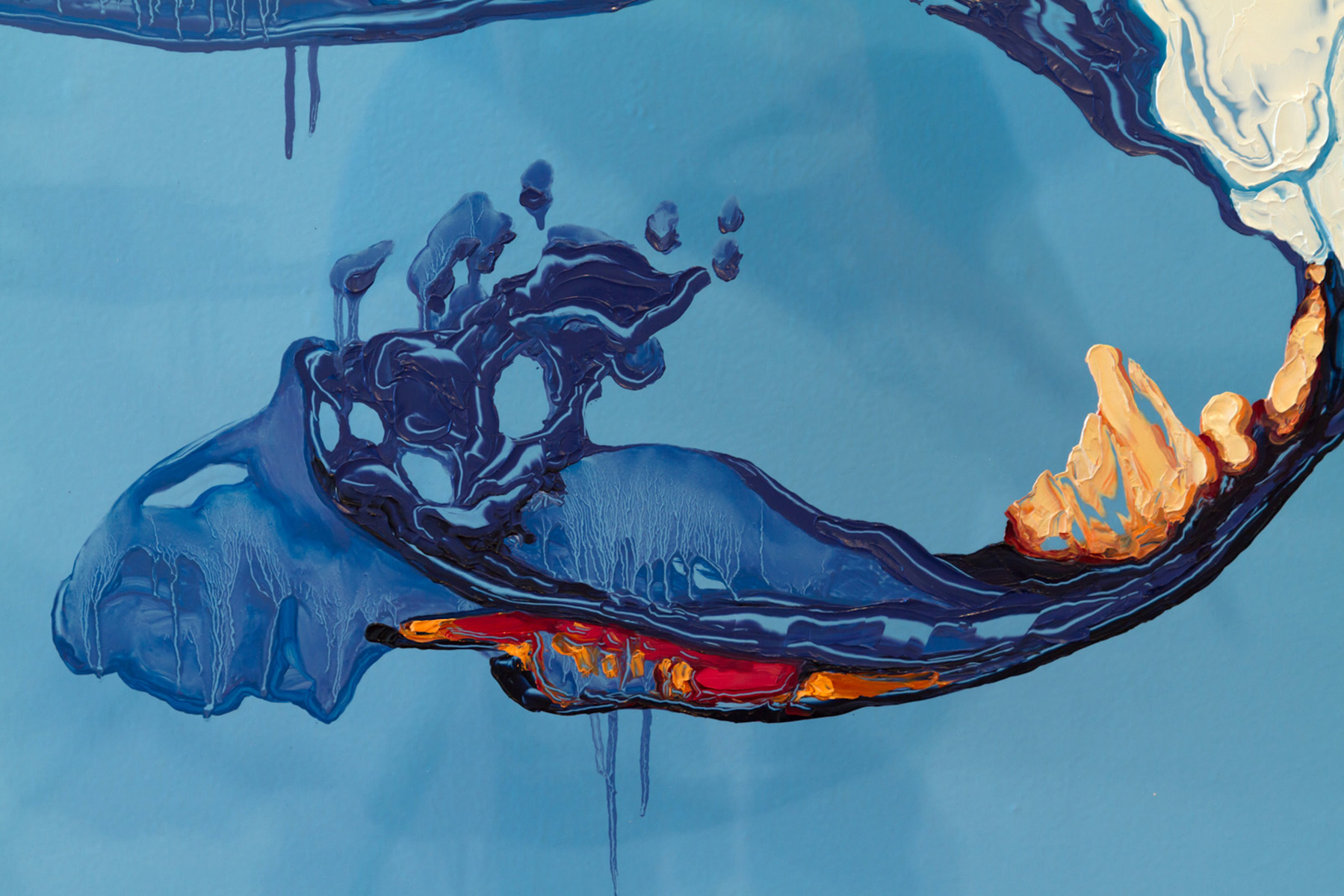 Jess MacNeil’s works are marked by absence and non-specific encounter, by junction and by the potent spaces between. They embody a sensibility that is poised on the brink of engagement and non-engagement. They are elusive, and cryptic, and expressed through fragmentation and angularity and focused in those parts that are ‘missing’; and predicated on a strange coexistence of presence and absence – or even the ‘presence of absence’.

Unfound continues her preoccupation with the dynamics of space and with such esoteric concepts as ’ the shape of between’; the geometry and interstices of our individual vantage points – be they physical, perceptual or psychological, and as manifested in the context of place, of time and of change. Hers is a fascination with space, its changing planes and our occupation and perspective of it; both the shared space and the space of the work of art itself.

Jess MacNeil is a London based Australian artist working in both London and Sydney. She works across media but predominantly in experimental painting, moving image, and installation. The sensibility of these principal art forms and the way they behave, the structure of their language, their “grammar”, is influential and evident right through her practice, including the ‘hybrid’ works that cross over between painting and object. 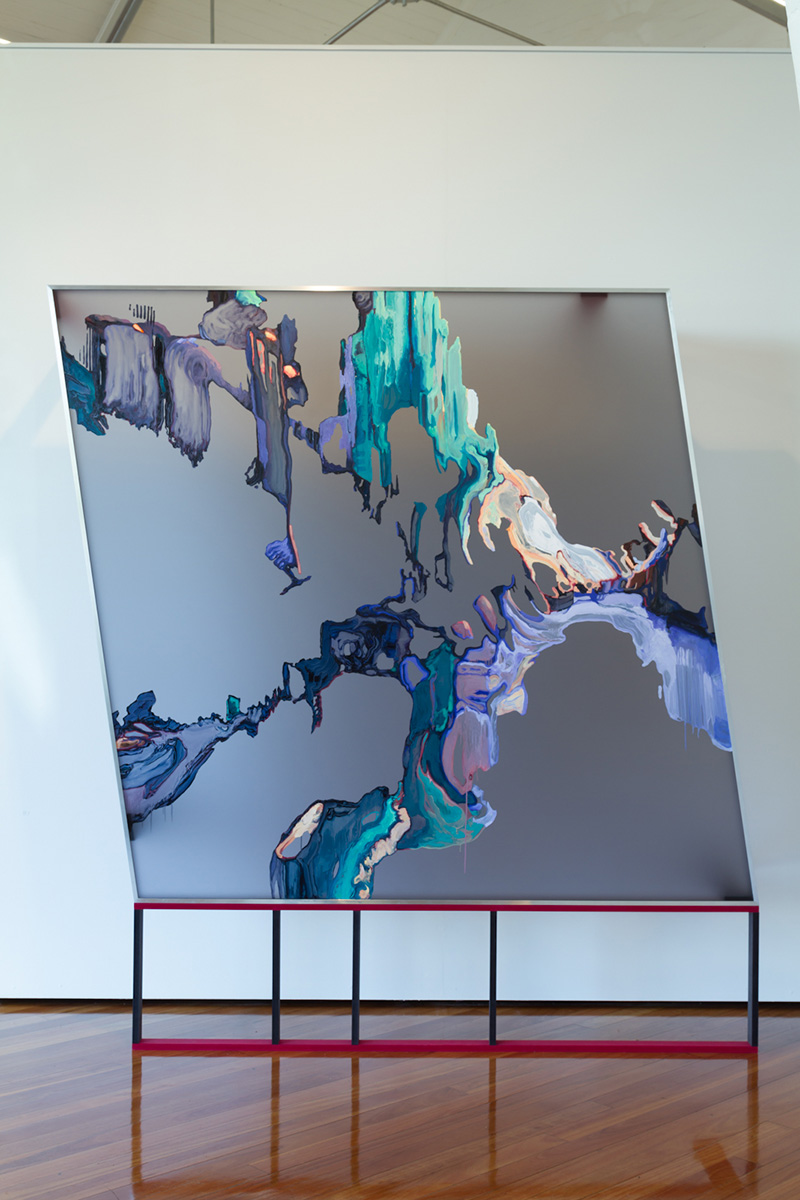 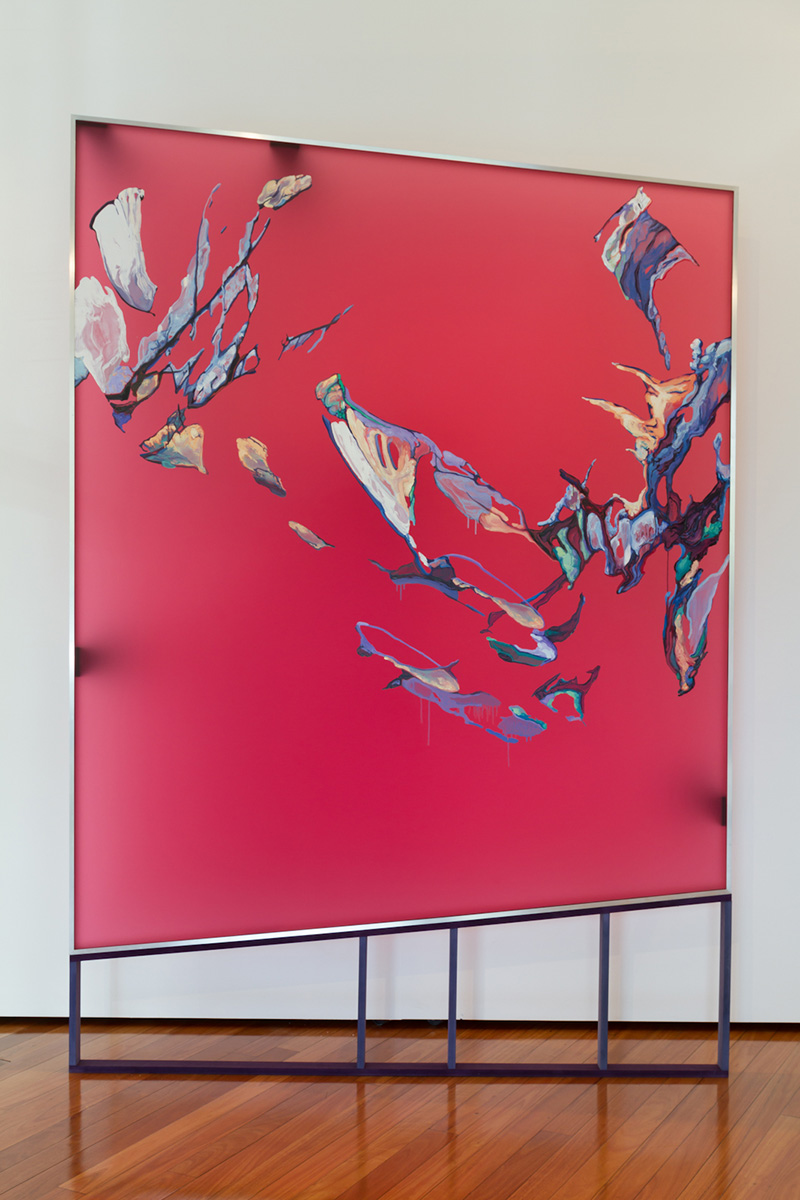 Three large-scale wall-based paintings-cum-constructions anchor the exhibition; the works are a variation and development from the free-standing paintings-as-sculptures introduced in her last exhibition, ‘In between something I have’ with Gallery Barry Keldoulis in 2012.

Some insights into her way of working and the context of these new works are revealed by the artist: The large paintings are ‘drawn’ from cumulatively constructed images of ‘landscapes’ close to me  (and to others) as I encounter and interpret them over time.  They’re drawn from video footage as source.  This footage is taken of different aspects of my surroundings, all shared/public spaces filled with the presence of others and, as always, their absence, or the ever intriguing combination of these that living in a crowded city presents.

Locations include Regents Canal (up the road), and the trees and greenery abutting the traffic and council estates near my studio. Paintings are then made from these drawings, incorporating both the vantage point of the camera as the footage was taken and its movement, and the motion of myself and my painting implements as I work to construct anew a space to inhabit (the space of the work) in the studio, which both refers to and transforms those earlier external encounters. The sense of ‘making sense’ and also ‘making nonsense’ is important. Alongside absence and presence – intertwined with it – is a preoccupation with orientation and disorientation, and part of the intrigue of exploring absence comes from the disorientation that idea conjures.

The artist’s vision is complicit with her materials and her processes to define, transform and change space. In an email from London early this year the artist told of how she was immersing herself in her materials; the sharp angularity of aluminium channel, the magical alchemy of reflective and see-through plastic, it’s connection to celluloid and film, the beautiful jewel like colors of the acrylic sheet used – raspberry, violet, amber, frosted grey and clear sea-and-sky blues. Reflection, both as the physical play of light and that of introspection and rumination, is a constant. Light, also the foundation of photography, is integral to the large paintings and to a series of five photographs mounted on jewel-toned acrylic sheet. It manifests also in the Interplay between the transparent Perspex surfaces with the light of the gallery, with the walls, and with the ambient light penetrating the space. 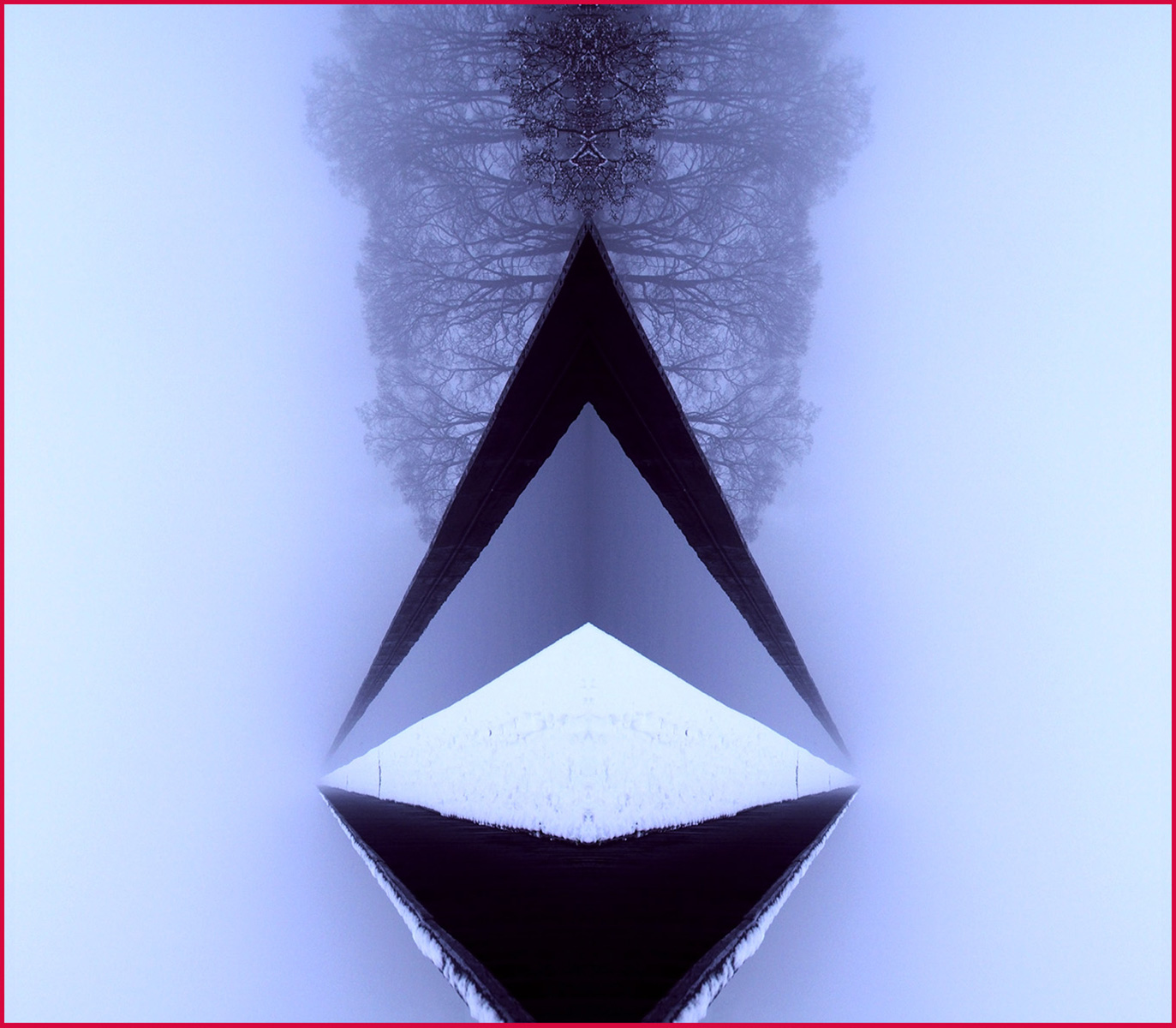 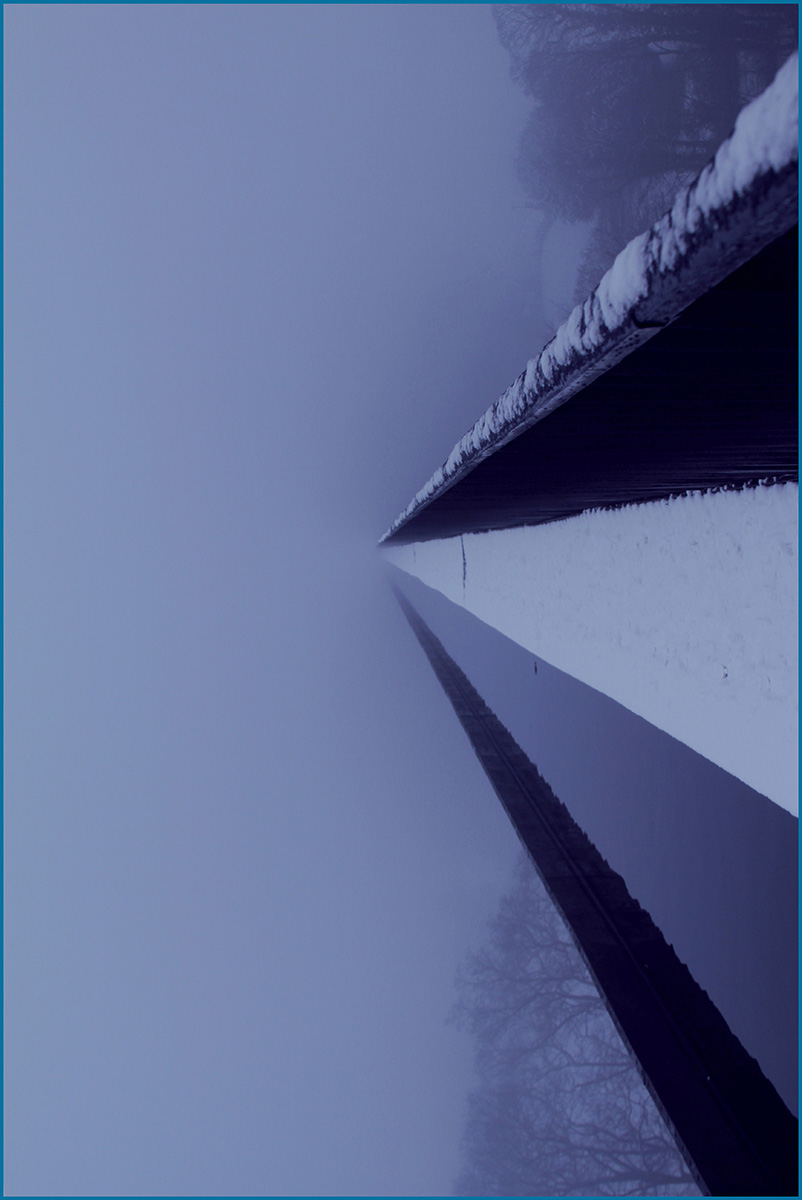 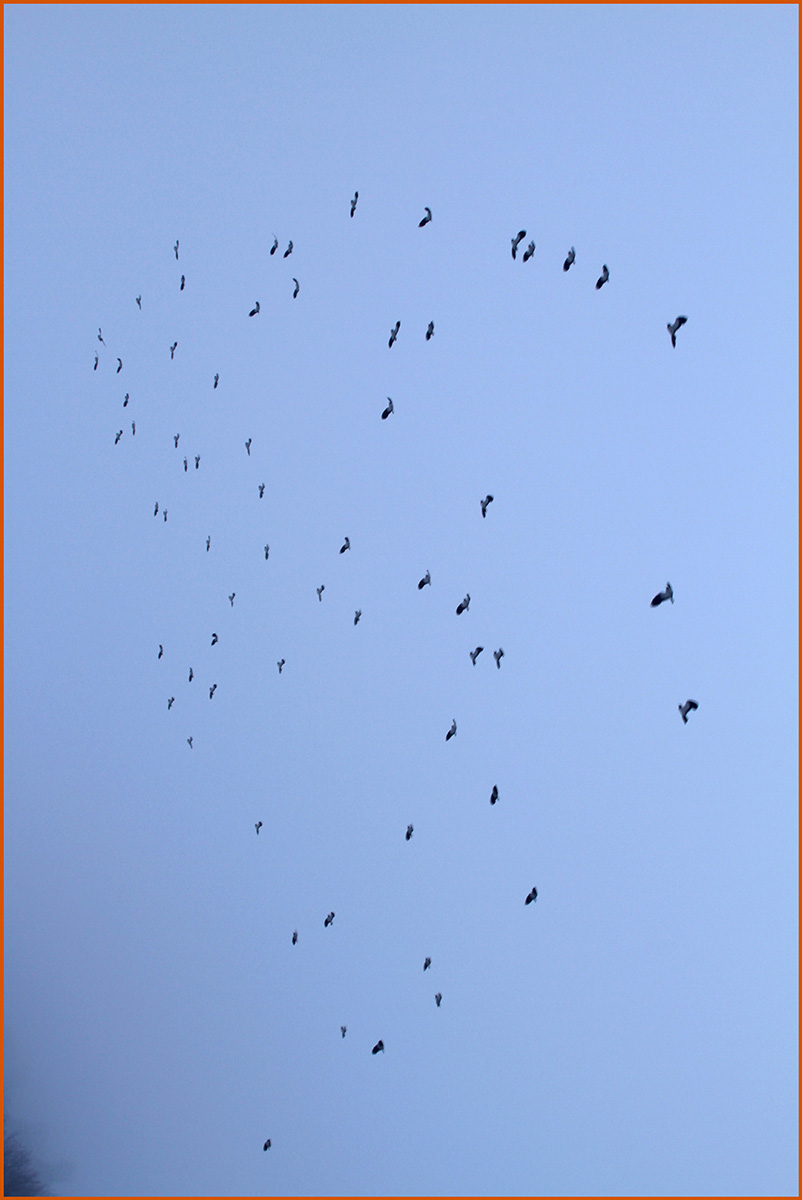 The photographs were all taken in Wales, in Llangollen, in wintertime. They were taken in the morning when I awoke early after arriving at where we were staying in the dark the night before and knowing little about it. A short walk along the snowy path beside the canal took me to a massive aqueduct/viaduct (apparently one of the engineering marvels of the world, I later discovered) where the rest of space – all but the narrow canal and even narrower path I was walking along – seemed to fall away into the fog. It was breathtakingly beautiful, confusing, eerie, unnerving and wonderful and, when crossing over the canal on the path, I was suspended in otherworldly timelessness and space-lessness. Eventually, the fog began to lift and the magic shifted too – did not drop away, but shifted definitely, as more was revealed of what was around me.

The photographs carry some of this feeling of dislocation from assumed reality and inability to get full bearings or orientation, emphasised by the way they are presented (including the framing with coloured acrylic, their literal orientation (sometimes tipping or upside-down, the mirroring of one image), and for me is carried in quite a sensual, bodily way.  My senses and perception, for example, are effected by the feeling of impossibility to quite gauge the gap or depth of the gorge portrayed in one image, or indeed immediately quite understand it somehow, without at the same time quite being able to realise what feels odd.  For me this (these, and the painting works too) opens up a rich and perplexing space to explore; the stretched elastic between understanding and confusion and our (my) suspension in it, particularly the ways we then navigate through it as we make our lives.

Simultaneity is a characteristic of Jess MacNeil’s practice. The Unfound works are formal and geometric, yet intuitive, with organic marks and traces informing a level of emotional mapping. A sense of performance is manifest: the choreography and gesture of the paint putting, the dance of light and paint, the push-me-pull-you route and cascade of the viscous accretions of oil paint; the ways of looking, the side glance, face on, glimpses, the spaces between, receding, advancing, – the invisible boundaries, real and notional.

The history and continuing quest of Jess MacNeil’s art making is imbedded in these sumptuous large summation works revealing process and the skeleton of art making.
All of the works in Unfound are marked by the orchestration and interaction of cumulative encounters; the cohesive unfolding from fragment to fragment; the jar of contradictory tangents and the quiescent potency of negative and positive spaces.
Barbara Dowse