At a time when Australia as a country is increasingly grappling with the need to tell the truth about our history, Artereal Gallery presents a series of challenging and subversive new works by award-winning multidisciplinary artist Liam Benson.

His first solo exhibition since his major Bella Room commission at the Museum of Contemporary Art Australia in 2019, Mapping the Immeasurable reflects on dilemmas, personal and universal, of Benson’s own and of Australia’s fraught dual histories. Rethinking our past in order to better understand the present and develop a new awareness of self is a process familiar to Liam Benson. Having found a way to reconcile the opposing forces within his own personal narrative as a queer artist who had a conservative suburban upbringing, Benson continues to unpack what it means to be a white Australian living within a Colonial legacy on stolen land. Challenging our engrained practice of seeing the world through a Colonial lens, Benson’s latest series of photographs and embroideries ask us to consider how Australia’s brutal past is still informing who we are today.

Imbued with a sense of optimism for the future and communicated through Benson’s own queer visual vernacular centred on drag culture and embroidery, Mapping the Immeasurable urges all Australian’s to tap into our empathy, change our thinking, embrace historical truth-telling and commit to creating tangible change.

Australia in the twenty-first century is a hybrid nation with a diverse Indigenous living culture, historical colonial baggage and an ever-changing multicultural present and future.  There exists no simple litmus test for racism; no paper strip dipped in our fluids to reveal attitudes; to show our ‘true colours’.

For Liam Benson, as a descendant of Australia’s white-washed histories, Mapping the Immeasurable is a merging of this consciousness with his materials and his meditative making processes to reconcile living within his colonial legacy on stolen Aboriginal land.

The content of Liam Benson’s art is contemplative. Many works appear abstract, created as ‘think pieces’; existing merely as traces. Often mapping the pathways of his meditations and musings as he seeks understanding and solace through the process of his performances or the mesmeric rhythm of stitching.

The large photo-image Above and Below furthers his exploration of archetypes. Performance and drag are integral to the artist’s sharing of empathy and embracing the psychology, the intimacy of expressing and assimilating ideas and experiences, and finding identity and fellow feeling.

So, why, in the two-hundred and fifty year anniversary of Captain James Cook’s fatal encounter with indigenous Gweagal people on their land at Camay [aka Botany Bay] and the worldwide impetus of “Black Lives Matter” protests, does Liam Benson feel the need to create yet another image of colonial poster boy, Cook? 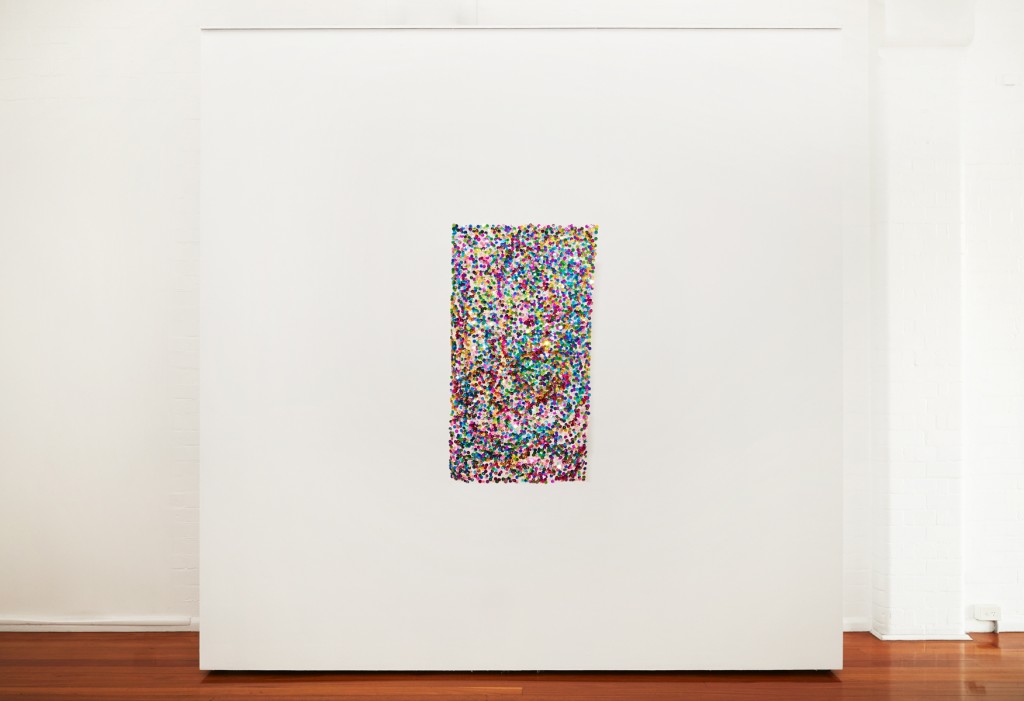 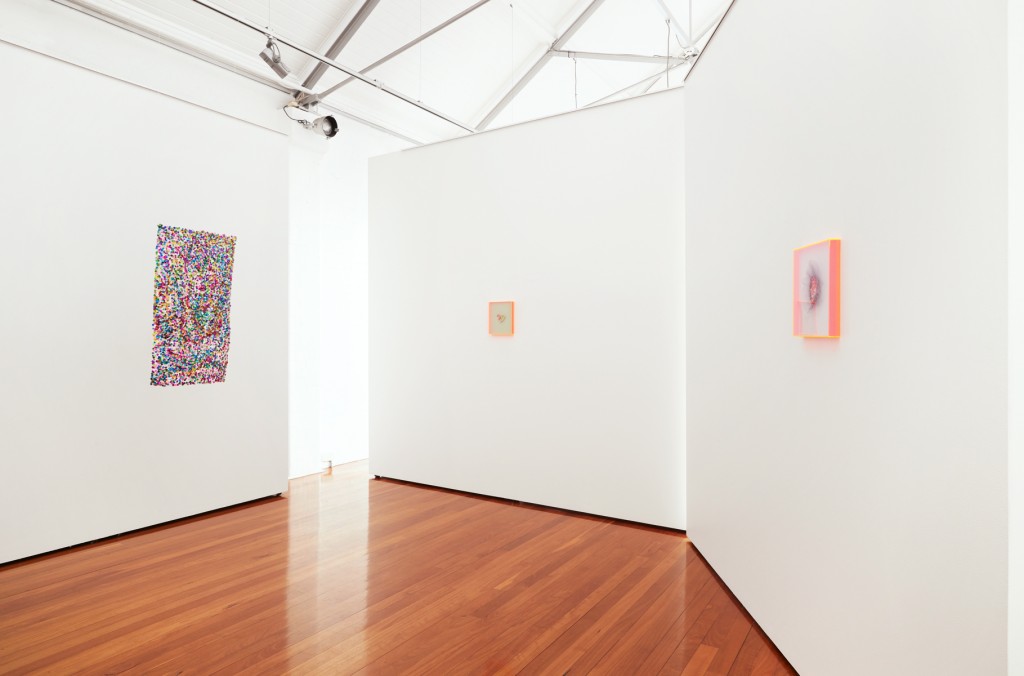 “Cook is a mirror”, Benson says. “A symbol of my white privilege and a point of introspection … of how complicit we are. We can tear down the statues because of shame, but it doesn’t change our problematic history. We need to understand the layers of the past and face, rethink and process how our histories manifest in our present.”

Liam Benson’s Above and Below image foregrounds the intrepid sailor submerged in his element, water. Head half in, half out. Rising? Sinking? Emulating his ambiguous place in history Cook is fittingly sited between a rock and a hard place. Intrusive and British-colonially white-wigged, his watery reflection presents a darker doppelganger against a background of distinctively Australian vegetation and landscape. Ripples from the part-submerged figure disturb the water – an intentional provocation from the artist to consider the layers of what lies beneath, not just what shows on the surface.

Cook’s jacket bore grand, gold, intricate embroidered shoulder decorations symbolic of power, rank and place. Liam Benson has responded with a series of small fanciful embroidered and sequin-bejewelled shoreline ‘epaulettes’. Connection to family and place informs his embroideries, intimate introspective homages to sites on his daily walks imbued with a lifetime of memories from living with the Australian bush. The intimate mind-maps are his stitched, abstract deliberations not only on the vexed and contested matter of sovereignty of Country, but also the beauty and sensory connection with habitat and memory places. The bijou emblems capture his musings on the fallen feathers of malting cockatoos, the grey of gums in Autumn, warm hues rippling through sandstone contours, the shimmer of spiny grass trees and windswept casuarinas and the golden glimmer of a glorious sunrise.

Cartography, mapping, scientific and geographic societies and academies burgeoned with exploration in the eighteenth and nineteenth centuries. Liam Benson’s works are also mapping new territories – but those of his emotions, navigating the pathways of his feelings and thoughts; tracing, unpacking and unburdening while stitching over layered and fleshly pink organza. Getting under the skin of vulnerabilities and dilemmas, political and personal.

“When I start an embroidery, I draw an impression or meditation on this relationship with my eyes closed. It’s a way of remembering and archiving these memories. Drawing them with my eyes closed allows the process to come from unconscious and cognitive sources alike. What gets recorded is abstract – but still holds the meaning. Each map is about an open process of navigating the intangible.”

Multiple filmy layers of rippling tulle are overlaid with intuitive stitches and beadwork for Benson’s Emotional Chart. Intimate, minimal and subtle, it is based around his eyes closed, freely drawn topographical map of the Sydney basin – the area between sea and Blue Mountains, his most visited places, and overlaid with abstract drawings charting the tracings and meanderings of his emotions surrounding childhood and family memories.

Colonial Burn Line came out of January’s time of bushfires in the Monaro where the artist’s sister lives and the shared experience and terror of his family and communities in danger. Recalling images of the inexorable march of fire lines that are at once beautiful and terrible. His hand drawn map of Sydney is overlaid onto three layers of pink silk organza and outlined in opalescent AB (Aurora Borealis) sequins named for the light phenomenon that spark and change colour combined with pearls symbolic of water and the sea.

This Summer Australia burned. Colour burns up the Right Way Wrong Way banner. The zig and zag patterning charts the violent transformative power of the bushfire lines, much like our own tension of histories and politics.

A jack is flown on the bow of a ship. With its multi-coloured sequins in joyous random applications like hundreds and thousands Deliquescent Jack is a flag for celebrating the flow of ideas and cacophony of the many voices in Australia; an optimistic and sparkling emblem towards reconciliation for now and later generations.

Throughout Mapping the Immeasurable Liam Benson finds empathy and familiarity with navigating duality from his personal experience growing up queer in a conservative environment; proud of the identity he has fostered despite carrying the shame of internalised homophobia and trauma from his experience. He acknowledges: “I might feel uncertain, confused and conflicted about one part of my identity and state of being, whilst finding comfort and a strong foundation or navigational point from another part of who I am. Both exist at the same time.”