Hyun-Hee Lee’s works traverse traditional Korean and Western contemporary art practices. She is part of the Asian diaspora; coming to settle in Australia a decade ago. The works she makes are related to her personal, yet universal story and exemplify the cross-cultural connections between Western and Asian communities and cultural beliefs and practices.

Her works express the immigrant experience of cultural and emotional displacement. They reflect the sentiment along the way to self-recognition and for dealing with the loneliness and a form of ‘loss of self’ that is commonly encountered. For Hyun-Hee Lee the works are also a conduit for the spiritual, being informed and produced in association with her daily meditation and prayer ritual.

The Memory lines paintings, executed in oil and acrylic on canvas, track memories of family and the Buddhist philosophy at the core of Korean culture. The paintings recall calligraphy practiced by her father and uses of text in many Buddhist prayer rituals. They also allude to the meditative act inherent in making calligraphic marks and the repetitive acts of dedication involved in Buddhist spiritual belief, a connection that is quite apart from the spatial world.

In December 2012, Hyun-Hee Lee accepted an artist residency in the studios of Red Gate Gallery in Beijing. In Beijing she sought out connections between Korean and Chinese religious practices. She discovered much of that relationship in the Yonghe Temple, popularly known as the ‘Lama Temple’ and one of the largest and most important Tibetan Buddhist monasteries in the world, where she participated in the prayer rituals. She also found solace in Jingshan public park, located immediately north of the Forbidden City and created as an artificial hill with its ‘Path to Enlightenment’, a landscaped corridor punctuated with shrines. 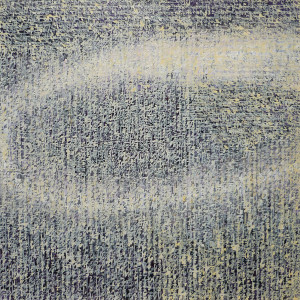 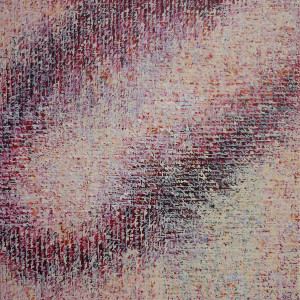 ‘Twenty-eight days in Beijing’, is a response to Hyun-Hee Lee’s coping with yet another variation of cultural displacement and an approach to bridging forgotten memory and present reality. The installation, a portal into another world, comprises twenty-eight cut out and collaged suspended paper panels that express the artist’s experiences and wishes or prayers within the observance of Buddhist traditions on each of her twenty-eight days in Beijing. The hangings are a form inspired by her father’s calligraphy panels that hold great emotional significance for her; these are of Buddhist sayings – words for when times are hard; a memory line and a calming guide for a better life.

From Beijing Hyun-Hee Lee went to visit her family in Korea and research her Master of Fine Arts thesis on how Korean religion is an influence in Korean culture, and how these experiences impact visually on her art practice. The Yin and Yang works refer to her Buddhist heritage and to co-existence, to shadow and light and good and bad. Hyun-Hee embraced aspects of Catholicism while in Australia (sending her daughter to a Catholic school) and the Yin and Yang works also have a source in the contradictions inherent in interpretations of the Christian Bible’s texts, prayers and psalms.

South Korea is a modern society with approximately fifty percent of the population Buddhist, but maintains primitive traditions with a heavy influence from a form of Shamanism indigenous to Korea and pre-dating Buddhism. It is a powerful force in Korean customs – more a cultural practice than a religion. The Shaman is a consultant for significant life events and decisions, with an influential role in medical, business, political, birth, death and marriage advice and is sought out to perform rites for ancestors. Practitioners are at once fortune-teller and good luck charm.

Hyun-Hee Lee’s Charm series of works acknowledge this tradition. She has elected yellow tones for the canvas and the wrapped prayer parcels stitched to them. Yellow is a very ‘spiritual’ colour in Daoist tradition, being that signifying the ‘centre’ of the five directions (east is blue, west is white, south is red, north is black). Each paper parcel is imprinted with folk images which have been used for centuries by Korean people. It is believed these images (Minhwa) contain Shamanistic powers of protection or to make wishes come true. She has drawn many of these images, (among them tigers, cranes, the sun, moon, pine-trees, tortoises, insects and flowers) onto woodblocks and printed them in orange ink on hanji paper before folding them to preserve their secrets. Each canvas has a different set of images and text; the smaller works contain those representing good luck and the larger for longevity. 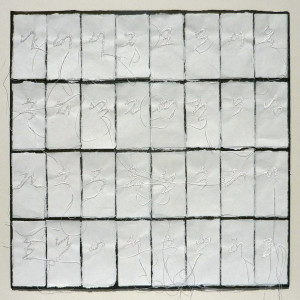 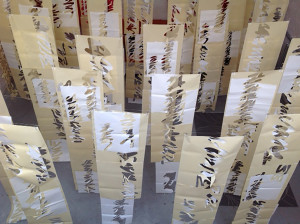 Hyun-Hee Lee won the ‘John Coburn Prize for Emerging Artists in association with the Blake Prize for Spiritual Art’ in 2012 and was also awarded a residency by the National Art School at the Cite International des Arts Studio in Paris, France. She will take up the Paris residency from August to October 2013.