This June, Artereal Gallery is proud to present a solo exhibition of new paintings by Australian-based, Korean artist Hyun-Hee Lee.

Fate, Destiny, or ’In-Yeon’ in Buddhist philosophy, with its direct and indirect causes has had Hyun-Hee Lee’s life path fetch her up in Sydney many years ago separating her over time and distance from her parents in Korea.

IN-YEON is a chronicle of Hyun-Hee Lee’s powerful and mixed emotional responses around her parents’ visit from Korea to Sydney for four weeks in September 2018 after a decade’s absence. An overwhelming emptiness for the artist followed their leaving.

Writing – whether letters, thoughts, often prayers, and a meditative diary entry made every day, have always been the sources and tools that informed the calligraphic style and marks of her paintings. The poesy of her paintings carries the expression of her emotions at their essence and traces the threads and intricate mesh of the artist’s spiritual and lived lives.

When her parents were in Sydney Hyun-Hee Lee wrote daily in her diary of their doings, of her feelings and responses. After they had left, looking back through that diary allowed her to relive and to honour and emotionally expand their experiences and time together.

Made in the aftermath of her parents’ departure, Emotional Journey is a series of thirty paintings, one for each of their thirty days together in which she mulls over, analyses, keeps alive and re-lives the joys, the anxieties and her regrets.

In her studio, after reading her diary entry for a particular day, the artist copies the text in pencil onto a primed canvas then paints over the whole surface with a colour and gesture expressive of the emotion implicit in the text; leaving her past memories imbedded forever in the under-painting. 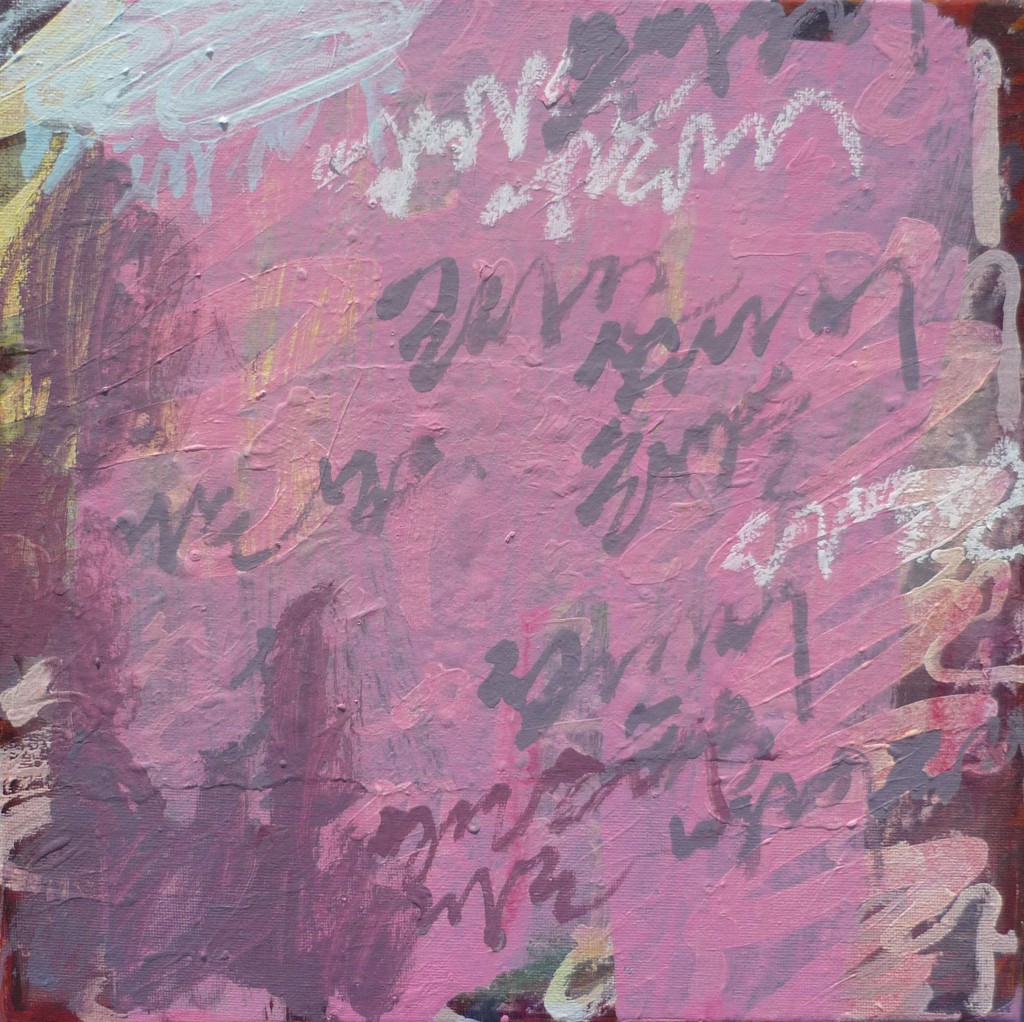 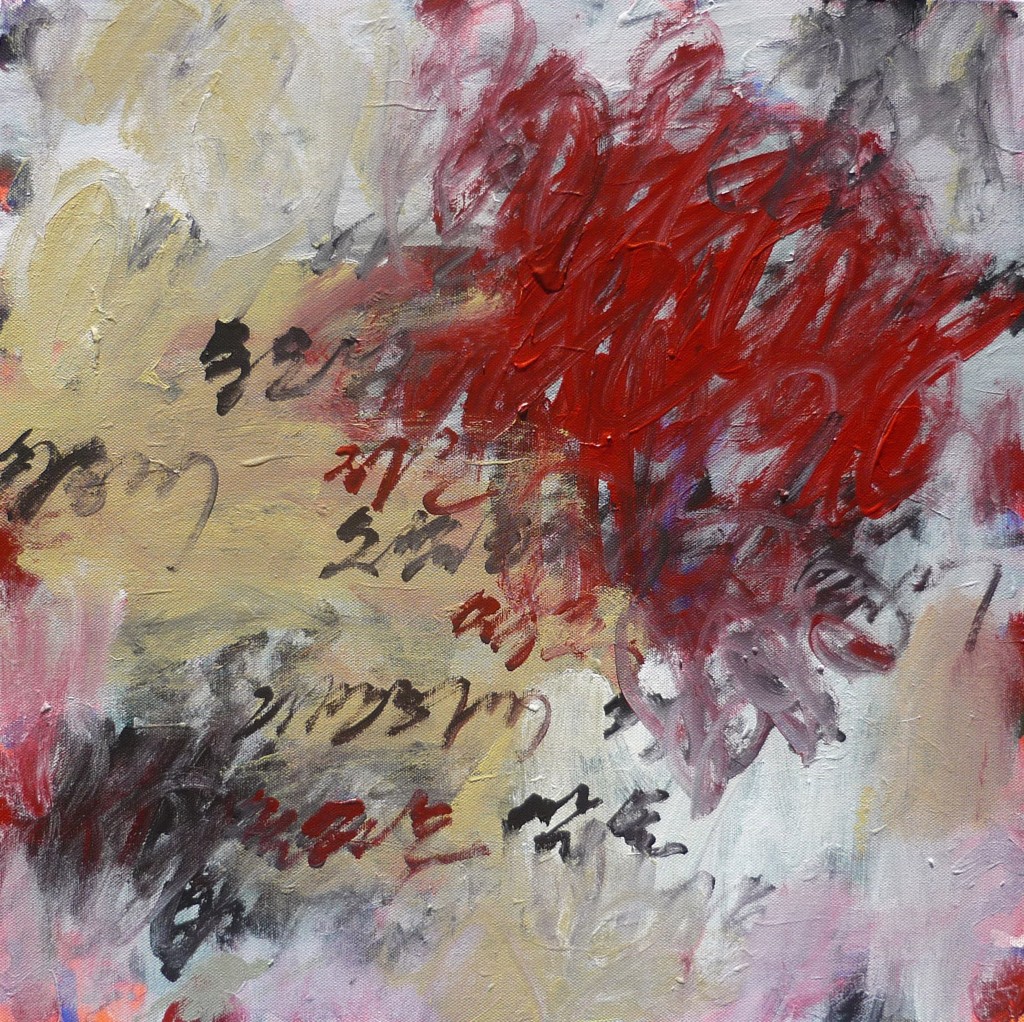 More marks are then overlaid, brushed on in wax, and in oil as well as acrylic paint. The marks are large or small, coloured dark or light relative to the artist’s sensations of being remorseful, “so very happy”, “sometimes more tense, others less“. She is careful to express both her recalled feelings and her immediate responses at the reliving as she paints. Pencil and pastel are scribbled and scratched into wet and onto dry. Erasures, mistakes, re-thinking, going over, re-writing, reflection and correction are all there as evidence of the artist’s angst or elation etched into the paintings’ layers.

A thousand emotions grew from a diary entry on her parents’ departure eve reflecting her mix of feelings in anticipation of the next day. Gratitude and Tolerance further convey the intensity of that time. Painted in the week after they left, both panels express the sorrow confided within her diary of missing her parents and of her being remorseful that she should have, could have, “done better”.

Her mood is lifting some months later when painting Sincerely, a paean made in homage, gratitude and respect for her parents. Warm red and pink hues pervade the painting. Red and pink are the colours of carnations that are linked with life and celebration in Korean culture and is the floral emblem for Parents’ Day celebrated in May in Korea. Light red is emblematic of admiration, dark red of love and affection, with the pink carnation symbolic of a mother’s undying love.

Reflection is a ‘keep-sake’. It is a letter intentionally written by the artist to be un-sent, to allow her to keep its sentiments close and retained in her heart.  The large monochrome summation installation Un-sent letter is a heartfelt, profoundly emotional outpouring painted and drawn into eight paper panels over several campaigns. With its genesis in her unsent letter, the original words are no longer legible for either a Korean or non-Korean speaker but the inherent flood of emotion and angst is raw and laid bare inscribed in white and grey scale onto each black painted sheet in skeletal thin scratchings, strike-throughs, drips, blurs and blotches. In places text is drawn tight and tiny, elsewhere as grand optimistic flourishes with a loaded brush. The inscribed marks map and mirror the private yet universal progress, poignancy and emotive passage of family separation and connection.