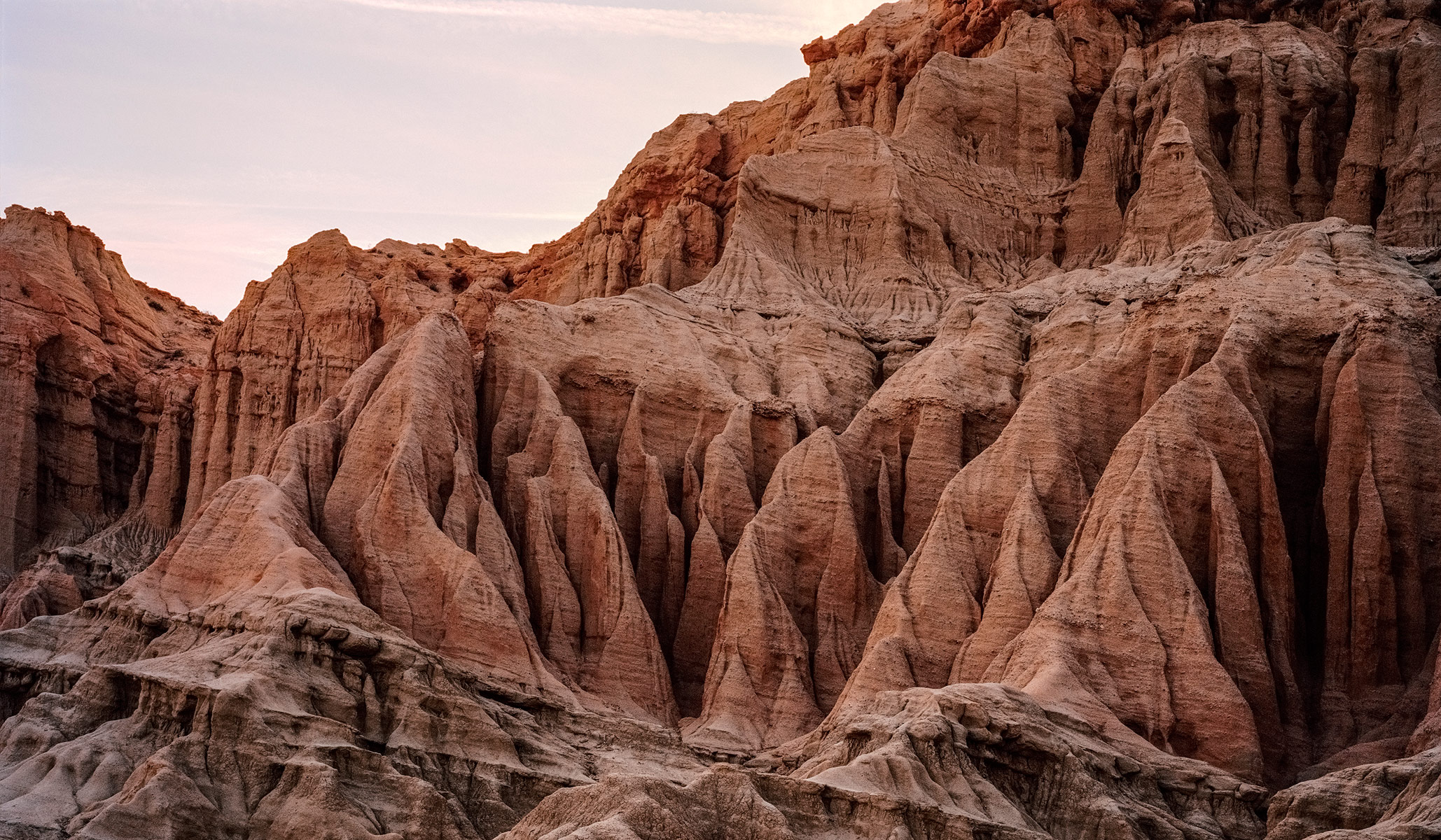 In Memory of Water

Fresh from her Australia Council Career Development Grant travels, multi-disciplinary artist Shoufay Derz has built a significant body of new photographic and sculptural works focusing on landscape, poetry and the ‘unknown’. From the Badlands of the USA to the chalk cliffs of Rugen, Germany, she has explored monumental eroded landscapes to create what she calls ‘luminous voids’, a visual poetry of the unknown. By reflecting on the presence of the past in the present, this new work asks us to comtemplate intimacies of the unknown, as well as the ruptures between our experience and knowledge of the world.

Transformation is at the essence of the art of Shoufay Derz.

Her works allude as much to what has been – as to that which is now seen. Whether the subject is landscape, lives or language, an echo of the past pervades in the present.

Poets use words to describe what is often beyond word. Images and objects, frequently vested in the poetic, are conceptual and physical vehicles for continuing themes of the ineffable, of absence and erasure in her art.

Along with aspects of her personal Taiwanese and German heritage and histories, and facets of art history, the artist works in a range of media, to mine the poetic from sources as diverse as the Biblical text Genesis, Rumi, the 13th-century Persian Sunni Muslim mystic together with contemporary poets, for her own visual forms of ‘concrete poetry’ that are expressive of transition, of absence, of coming and unbecoming…

Fragile landscapes, images of eroded sites, disappearing cliffs, are for the artist wordless poems and material representations of absence; terrains of emptiness that retain traces of geological scar, forms that are no longer there, subjects of periods of drought and flooding. Hence the title: In Memory of Water…

The panoramic USA Badlands landscape series Via Negative is named for a philosophical mode of alluding to, or describing ‘what is not’. Derz seeks terrains both physical and psychological – internal landscapes that are at the intersection of memory and triggered by traces and inescapable transcriptions of the past in the present.

photographed on Rügen an island in the Baltic Sea with Germany opposite one shoreline, Denmark on the other. The photographs are overlaid with veils of chalk taken from the site. It is sold as an art material in German art stores and, as told to her by her German art restorer cousin, is also used typically to paint frescoes as it is reversible – ephemeral – it can be washed off.

“‘To Descend’” the artist notes, “can refer to the movement down to the sea edge when visiting these steep eroded cliffs, but also to link back and descend from the past. It poses questions of how our inheritance, by bloodline, culture, and language contribute to the shape of our present circumstance. How are we indebted positively or negatively, to the past in recognising what we are today? In what way can this be erased rewritten and reconfigured? “

Retrospective reference is also made to the art-historical legacy of German Romanticist, Casper David Friedrich (1774 – 1840) who famously painted the majestic Rügen cliffs in Derz’s significant choice of site and in making the dimensions of her images to be the same size as his paintings. The reference is not nostalgic but is intended by the artist to be a critical look at the mythologies of history or more personally the mythologies of family which we understand through stories to form our identity:  “Rather than point out towards the void of the sea in the style of Casper David Friedrich, my lens focused towards the material of the chalk cliffs with chalk paradoxically as a whitewash to further void the already worn shoreline. Yes, you can see hints of the horizon, but the main substance is the chalk –a material of writing, and a material I associate with the formation of ideas. And although ephemeral in that it can be wiped off chalk is a material representing language in a primary

state and embodies the essence of transformation; thought to word, hand to paper, word to material.”

Birth and creation is a subtext of this exhibition and the subject of Born, a bronze casting of the word in the German language (geboren) in the artist’s grandfather’s handwriting taken from her father’s migration papers from Germany to Australia.  Legacy through language and the materiality of writing again surfaces with the Creation story from the Book of Genesis with its first line about the ephemeral moment of transformation:

It finds repetition in Reversing the Spell I embroidered in black on black dyed silk in a ghosted facsimile of Derz’s father’s handwriting splayed with black feathered quills, a form of quasi portrait; and in Reversing the Spell II a Chinese language version written in Derz’s cousin’s calligraphy with the blank, negative emptiness of the calligraphic characters cut out from the robust white hand-made paper. The artist acknowledges in these works the poem “Reading the Bible Backwards” by Eleanor Wilnor from her collection Reversing the Spell (1998) that envisions the reversing of the Creation story told in Genesis by describing the sea’s slow inundation of the earth that would reverse the spell of sins against nature and human history’s disasters and legacies. 無 Mu III (not have; without) a cast brass sculpture of a disembodied tongue presented on a chalk stick bed was cast during an artist residency in Berlin. With its connotation of a mute state, it speaks of the impotency felt from absence of knowledge of languages on both a universal and personal familial level for the artist:

“What has been passed down to me are stories assembled into a kind of myth made of broken pieces, memories, viewpoints shared by various people and material remnants.

My interest in the ‘unknown’ is not concerned with the romantic, the mystical. I’m driven by a fierce curiosity in the way poetry speaks the unspoken and how this can positively contribute to new forms of visual arts practice.

My interest in this richly complex area of study is largely engendered by my mixed Chinese and German heritage, and the experience of not being raised to speak the languages of my parentage. This lack of access and understanding nurtures a sensitivity towards the unknown that is both formative, familiar and yet paradoxically also the basis for much disconnect. In a broader cultural context my work is about cultivating the creative potential of the negative, as mirror to how one’s identity is shaped by unknown and unspoken potencies.”

Shoufay has been the recipient of numerous awards, residencies and grants including the prestigious 52nd Blake Prize for Religious Art in 2003. She has exhibited her works widely, both throughout Australia and abroad, and her work has been included in major group exhibitions at The Museum of Modern Art (Shanghai), OCTA Museum of Contemporary Art (Shenzhen), and The Esplanade (Singapore).

Within Australia, Derz has held solo exhibitions at Bathurst Regional Art Gallery, the Queensland Centre for Photography and Sherman Galleries. Her work can be found in a number of significant public and private collections including the Balnaves collection, the Art Gallery of South Australia and the Bresic Whitney art collection.