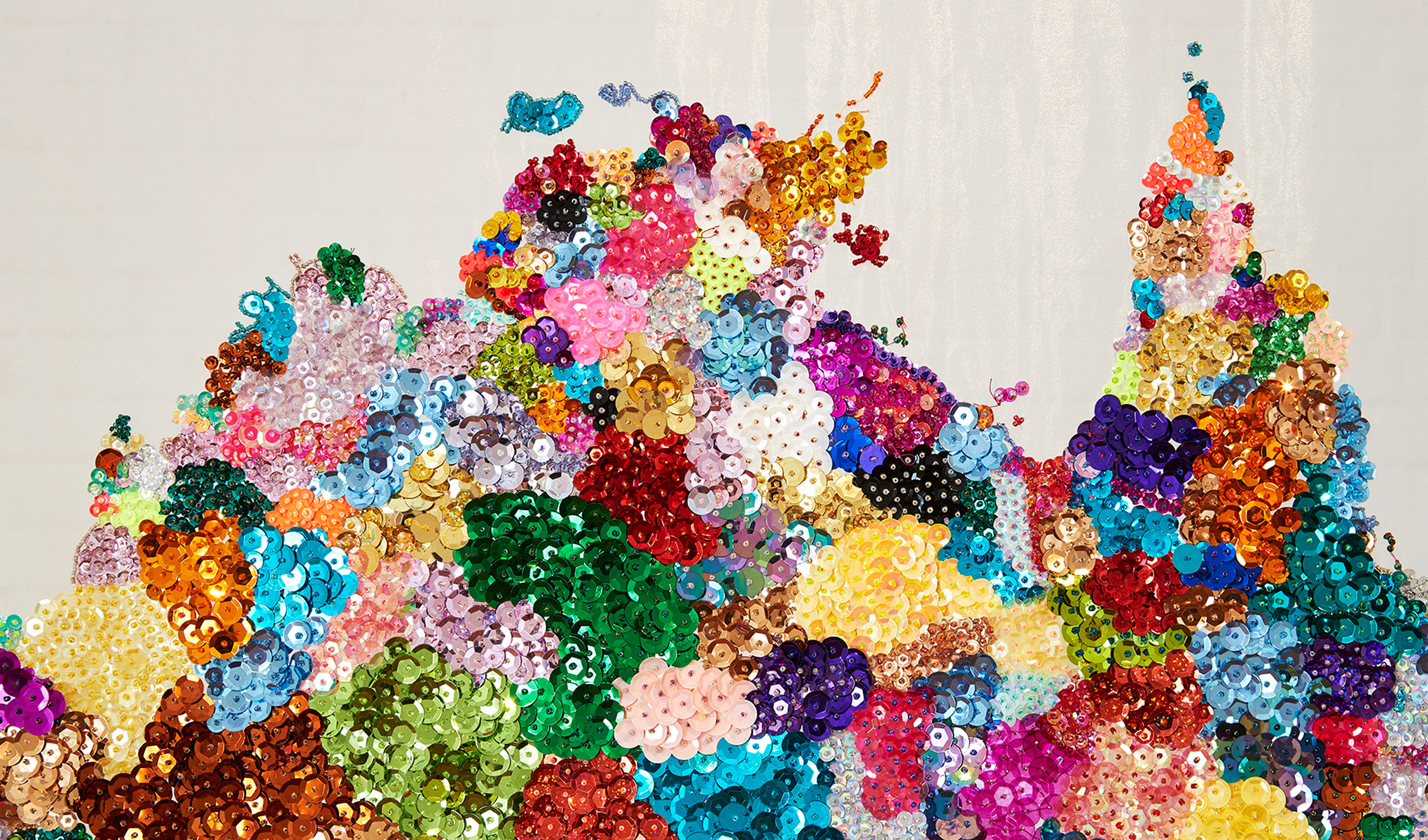 I HAVE A WEALTH OF UNCONDITIONAL LOVE AND IT’S YOURS IF YOU WANT IT
Artist Talk: Saturday 28 October at 3pm

I have a wealth of unconditional love, and it’s yours if you want it… is an exhibition as a conversation about connection with others. Artist-Facilitator, Liam Benson embraces connectedness, kinship, empathy and fellow-feeling.

The artist’s ‘from the heart’ title resonates with the compassion and generous attitudes of the people he has worked with and supported and expresses his own experiences within community groups.

The power of unlimited love as a theme is current in art. For decades, iconic Japanese artist Yayoi Kusamai has conjured a space of infinite connectivity from her profound isolation in a psychiatric facility in Tokyo where she has lived since 1975.

“my work talks about ‘Milkali Kutju’, that we as Indigenous and non-Indigenous people are equal and that we have one blood and the anatomy is made of the two kidneys, the liver, the lungs the heart.”   ”My work is about peace, it’s about love, it’s about joy, it’s about happiness. It’s not about hate, it’s not about fear, it’s not about racism. It’s about me, as a person and that I can be a resolution, I have the best of LORE and LAW and that Milkali Kutju is within all of us and that one blood is in the veins of DNA and evolved in everybody and we are equal and there is no superiority.”

Liam Benson’s art practice is his way of dealing with the world. He too addresses aspects of Australian identity – which in Liam’s purview can be whatever you make it… His art celebrates the function of good while exposing the alienating aspects of colonialism and its attendant attitudes. His art is a way for discussing a mechanism and a conversation around social interactions and what needs to happen…

Central to the ethos of inclusiveness of the exhibition are three collaborative community driven pieces that have been made and embroidered in Liam Benson’s artist-led workshops in public and accessible places; at schools, community groups and centres and regional galleries, where Liam has done, or will continue to schedule artist talks in association with more making and exchanges.

At the nucleus of this community of creatives is ADORNED a multicultural, multi-lingual diversity of makers, genders, ethnicities and abilities; a living, working, evolving artist collective that is a project facilitated by Liam Benson and Kiri Morcombe in association with Parramatta Artists Studios. It is for and by women and their families in Western Sydney who come together as artists and makers.

You and Me is a map of Australia on transparent crystal organza, identifying and acknowledging the regions of different indigenous Aboriginal language groups picked out in a multicolor of shiny, opalescent sequins stitched by many and varied hands of the multiple ethnicities and diversity of language speakers of contemporary Australia.

Thoughts and Prayers, a garland of embroidered flowers on a black fabric ground, was created by many and diverse hands over numerous hours and conversations during 2015-2017. It is a memorial that is at once an expression of public emotion and of everybody’s private mourning, but also a celebration of love and the living.

It is in response to the outpourings of grief and empathy, the condolences and massed floral tributes that the artist calls “… part of the culture of shared compassion that exists and I have been witness to all my life. The first massed floral tribute I witnessed was at the death of Dianna, I watched it unfold on television. I have also attended every Anzac day since I was a boy with my father and I love the floral wreaths that adorn the Cenotaph each year. It’s also a reference to the flowers I received when my Mother, Father and Grandparents passed away. Their passing still continues to inform me in the most profound way. I also understand that it is a universal experience, and I want to embrace it as a natural and profound part of life; it’s culture at its most fundamental and pure when it’s about binding people together and finding common ground.”

Personal memories and solaces, in identification with losses, with victims and their families, are imbedded into the memorial work of art and in the process of its making; with participants verbally acknowledging while stitching: “a sunflower for Grandpa”, or siblings, “a rose for mum” ….

But many of the flowers represent living people and existing relationships; friends, parents and partners. Thoughts and Prayers allows people to also acknowledge and celebrate loved ones whilst they are alive, and highlight them as equally significant in our lives.

An informal and celebratory approach is taken with the third of the community-created works, a relaxed, freeform, colourful sequin encrusted kaleidoscopic rendition of the Australian flag emblazoned with a shimmering constellation of bejeweled stars.

Liam Benson’s works of art to date have focused on his own body as the primary vehicle at front and centre for interpreting aspects of identity in his guises and personae as performer, as visual artist and as maker. While his body is not shown in his latest works, they are still self-referential.

His approach to his identity and personal Australian/Anglo/Celtic heritage is realized in a collection of individual works that are a reflection and a response to the ‘artefacts’, cultural and ceremonial objects that he has had around him all his life:

“My highland outfit – the pins, emblems, sigil and mottoes, swords, clan crests, my mothers jewelry and fashion etc. Also the objects we had from Scotland like the ceramic decorations, scarfs, tea-cups, figurines we used day to day and had around the house.”

He integrates both new and found materials, collecting beautiful materials and celebrating them as a subcultural language: “… for instance sequins and beads are in reference to drag costumes and the clothing of my mother – she had a lot of beaded and embroidered detail in her clothing during my childhood of the 80’s and 90’s”

The fabled creature, the Unicorn has been the emblematic Scottish national animal gracing its Coat of Arms since the 1200s. Liam Benson’s wall-mounted crest INFINITUS CREATIONIS depicts a Unicorn indicative of Liam’s personal ancestry, but is also connected with many cultures through myths and legends and is familiar imagery in pop culture.

The magical and elusive Unicorn, (which Liam symbolically renders in pink and blue with gold detail), has been adopted as an icon for the gay (LGBTI) community for its masculine and feminine references with links to contemporary femininity – but it has been a symbol of masculine virility in the past.

The emblems, symbols, family crests, mottos and coats-of-arms that are often aligned with pageantry and the traditions of Heraldry are inspired by his heritage but indicative of the interaction and of a melting pot of influences, with a mix of Victoriana, cross-gender, cross-cultural references from Unicorns to Islam for his objects of ‘Contemporary Australiana’.

Spectrum, an organic work that is in essence ‘painting’ with sequins exploits the ‘optimistic’ shimmer and opalescence and translucent colours and riches of the iridescent Australian landscape – gold, copper, rose, brown, aqua, black, silver.

Interaction and inclusiveness, ideas of place and of displacement – physically, psychologically and culturally underpin Liam Benson’s romantic beaded rendition of Australia from space at night installed within a constellation of works embroidered with empathetic sentiments and thoughts and prayers; among them loaded and evocative phrases: brother/ lover, both, grace, I know, and refuge.

The aspiration for inclusiveness continues with Liam Benson’s embroidered phrase Alhamdulillah,
translated from Arabic as “Praise be to God” that is chosen by the artist for its universality in its use by Muslims of every background, but also a phrase spoken by Christians and Jews and peoples of multiple beliefs and philosophies.

He embroiders the message in colours of green and gold for the cross-cultural significances of the colours. Yellow signifies happiness and good fortune and green is resonant of new and eternal life for the Arab world. The green and gold colours of wattle, the national floral emblem for Australia have been in popular usage since 1800 and were formally proclaimed in 1984 by the Governor General as official national colours:

Liam Benson says of this piece: “I wanted a ‘Thank you’ work in the exhibition but decided to use a phrase that my friend Hilin taught me. She says it all the time and I noticed it, and asked about it and she taught me how to say it and what it means. So now I say it in my head all the time. I link it to all the people I have worked with through community. It’s about me saying ‘thank God’ for all the people in my life – new people I have made connections with, new family and friends, who may speak other languages but have brought new perspectives into my life and enriched my understanding of the world, of being human, – and all the other unanswerable questions we are seeking.”