THIS IS A FULL COURT PRESS

In the mid to late 1980’s one of my fondest memories of spending time with my father was watching NBA basketball games on Sunday mornings. This was a time in basketball dominated by teams like the Los Angeles Lakers, Boston Celtics and New York Knicks. It was a time before Michael Jordan’s Chicago Bulls championship reign and the true globalization of basketball as an international sports marketing phenomenon.

The early 90’s rise of the Chicago Bulls coincided with the retirement of my favourite player, Larry Bird of the Celtics. This transfer of basketball power from Bird to Jordan signified a shift in the game and a new generation of fans. Friends of mine in their late 20’s and early 30’s grew up in this new era dominated by Jordan and significantly for Australian sporting culture, would identify Jordan as not only their favourite basketball player of all time but also their favourite sports person.

Period. They lost interest in cricket or rugby and whole-heartedly embraced an imported global sporting culture driven by marketing and a convergence with the rise of hip-hop and sneaker obsession. A world reflective of the aspirations and hoop dreams of urban black America, which managed to find in them, antipodean relevance. 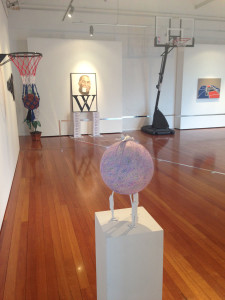 Many of the artists in this exhibition hail from this generation and would be broadly classified as fans of the sport. However, some of the artists are not, yet they have responded visually to the formal qualities of basketball. A game dominated by parallel and intersecting lines and the round form of the ball.

This exhibition is in a way site specific. When I first visited Artereal, I was struck with a memory of a New England school basketball court that I had visited several years earlier. The floors and pitched roof evoking memories of this court that had contained so many decades of sweat and cheers, triumph and failure. Sport is an interesting comparison to art. In sport there are definite outcomes and rules. Clearly marked boundaries and winners and losers. In art, these boundaries blur and perhaps this is the reason the artists in this exhibition who love basketball love it so. In this game of art they long for the finite, the tangible of a result whilst playing a game where ideas are the goals and everything ends up a draw at best. 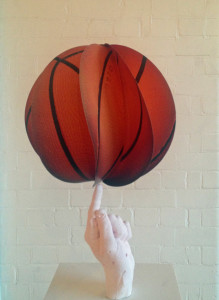