In association with Parramatta Artists Studios

At 3pm on Saturday 18 April, at Artereal Gallery.

The Façade exhibition explores the fine line where a façade is no longer just the veil between inside and outside but is the merging of both. This relationship is applicable to the architectural and layered work of Mason Kimber, John Spiteri and Leahlani Johnson and, the multiple yet porous personalities in Linda Brescia, Hossein Gheami, Tom Polo and Liam Benson’s works.

Informed by his recent three-month residency in Rome, Italy, Mason Kimber’s new works are borne from the traditions of fresco painting. Using techniques reminiscent of Pompeian style muralism, Fresco 7 (2015) and Fresco 8 (2015) reveal the remnants of a built space. Kimber constructs layers of sand and plaster to mimic the texture of ancient walls; after the foundational layer is dry, he reworks the composition with sheer and opaque layers of paint to create a trompe l’oeil effect. The eye is fooled by the simulated depth alluded to by shadows and structural forms. Kimber plays with breaking the fourth wall between the work and viewer and draws their eye into the perplexing scene of dilapidated buildings. The tension between the numerous dimensions of foreground and background allows the surface to become interchangeable. 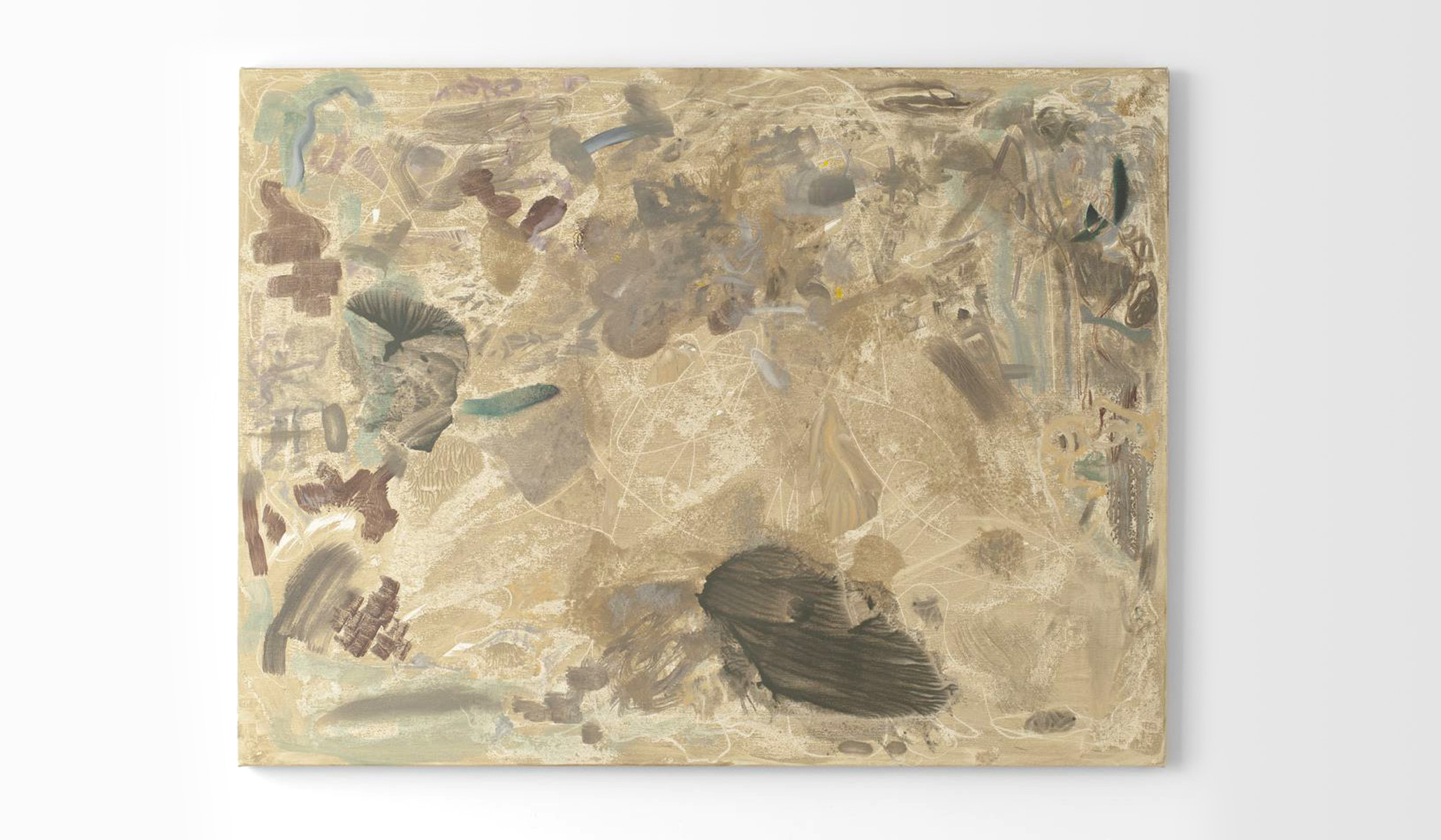 John Spiteri’s use of the painted surface to create depth evokes a different quality—delicate and more elusive. Where Kimber creates dense layers, Spiteri works in the inverse using the canvas as an anchor for the painted composition; every layer after the first is more subtle and intangible. In The House of Hair (2010) the raw linen is exposed as if the paint were cut out cleanly from the flat wash. An earthy colour, replicating the linen, is used intentionally in various areas to give the illusion of the paint being washed or scraped off. Further still, the pigment appears to be gently sanded away and the intensity of the blue-grey’s two-dimensionality has been eroded gradually—undoing and settling into a different worn state. Spiteri is not interested in the pristine and preserved veneer, preferring instead to accentuate the base.

This temporal quality of artistic process is echoed in Leahlani Johnson’s installation The Contrast of the Recent Past (2015). In this work, the artist assembles key components of her work – leaf drawings and ceramics – to interrogate different sensations of time. Johnson’s ceramic practice sees the artist rigorously creating facsimiles of fabric pieces, an act that simultaneously preserves and memorialises them. These delicate works are projections of the original object, not quite ‘real’ but not unreal. Alongside these pieces is a grid of gymea lily leaves attached to the wall. Applied fresh and drying up over the course of the exhibition, the leaves hold a shifting impression of time. For Johnson, the subjective nature of time’s movement is a semblance of reality. 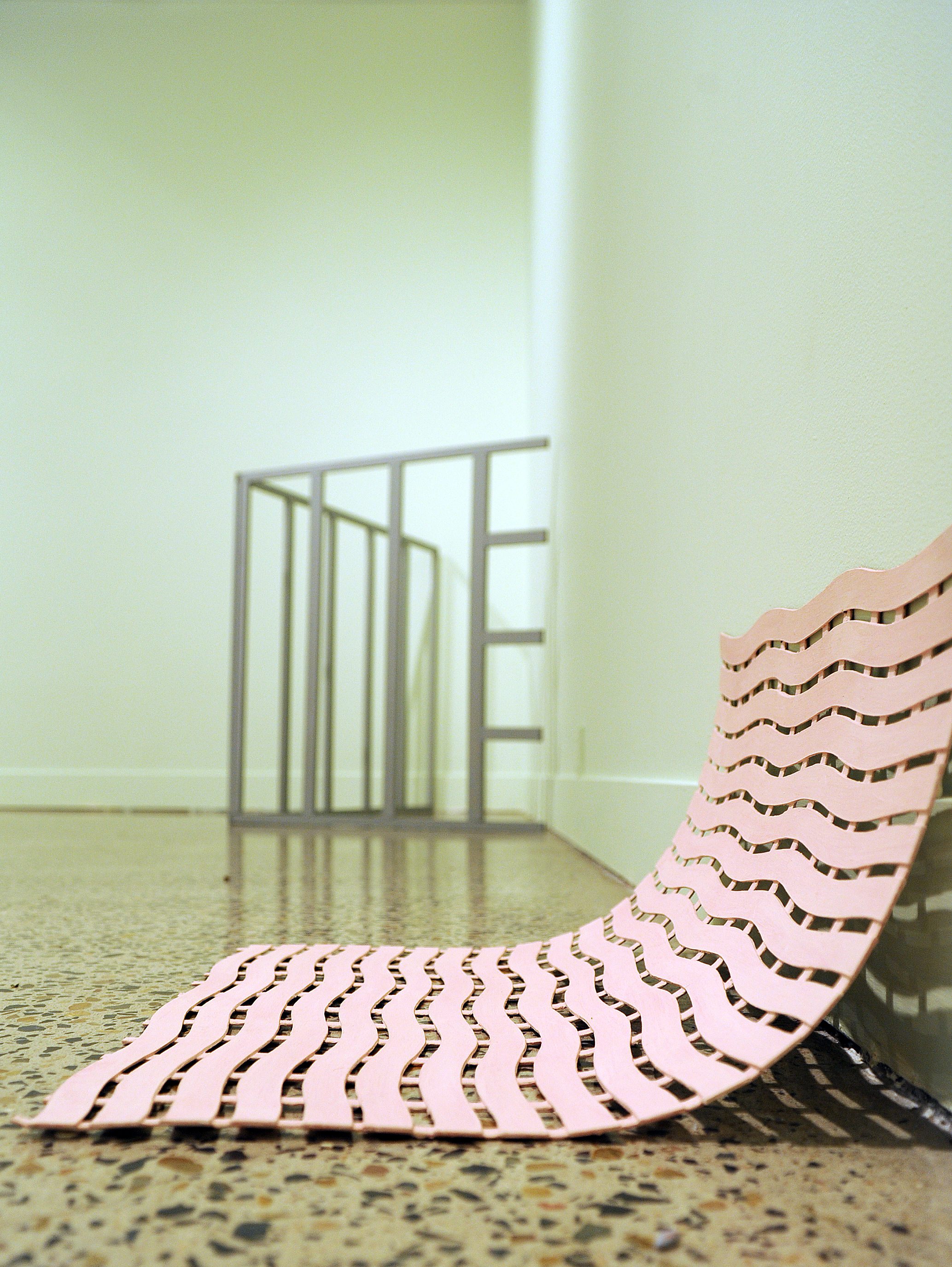 Presentations of the self are sometimes defined by intuitive motivations to create abstracted versions of personality. Facades are not a separate, false or deceptive notion but often are the realisation of a self-conscious state of the private self. Hossein Ghaemi’s mobile structure derives from the artist’s earlier sculptural works, which use irreverent images of faces. In this collection of works, bizarre caricatures can be made out on the large circular panels. The peculiar faces, disguised by painted ornamentation, are a theatre of riddles concealing emotional truths behind pranks and jokes. They are absurd, ambiguous and erotic references that the artist inserts to throw off the viewer and stagger the narrative. In all of Ghaemi’s sculptural work there is a nod toward the performative, whether it be in movement, lighting or costume, there is a surreal comedy being performed.

In our culture of continual validation, Tom Polo’s painting practice explores anxieties and missed moments in our daily pursuits. Using his signature motifs of faces and vessels, Talking Heads Talk Back (2014) depicts loosely figurative forms relating without certainty on the canvas. Double Doubt (2014), a new extension into ceramics for Polo, depicts a tableau between two faces which, in their exaggerated features, are mask-like; they confront each other, both poised to speak but unable to do so. The faces, with ears that appear to also function as handles, are reminiscent of the vessel that features prevalently in the artist’s paintings. These three-dimensional heads are literal containers for words and thoughts that cannot be expressed.

Liam Benson’s new work Fortitudine (2015) is a response to the often singular narrative that Australian masculinity is confined within and it’s perpetuation through conservative social attitudes. On one screen, of the two-channel video work, the fully-bearded artist performs strenuous gestures off screen building up to an exhaustion that drives him to tears. This vulnerable gesture contradicts the qualities of strength and virility that are traditionally associated with masculinity. On the second screen the artist sings a Scottish folk song to acknowledge his maternal heritage and express feelings of emptiness that arise from a cultural absence in contemporary Australian culture. The impact of these emotional performances can be felt through the push and pull between the two screens as they climax and Benson’s face comes in and out of focus randomly. The artist abolishes the machismo cliché of cultural expectations to emphasise a subtler quality of gender.

Also investigating gender stereotype, Linda Brescia’s two photographs from the Persona and Performance in Everyday Life (2014) series come to similar conclusions about the perceptual struggle. The body and face in these images are obscured by a bodysuit concealing the identity of the model underneath the costume. In the setting of a suburban family home, the photographs make the viewer a voyeur in the private space of a bedroom as she observes her reflection—we witness the figure struggling to accept the overtly sexual ‘skin’ that sits uncomfortably tight on her body. Brescia reveals a silent despair of navigating individuality through the facades that we acceptingly ‘wear’.

The exhibited works allow facades to operate of their own accord, bringing to light their elusive presence and examining the motivations behind them. Both formally and conceptually, these purposefully constructed façades are a revelation of ideas and ideals concealed and revealed.