Dord Burrough’s fey, pale paintings with their pastel palette of mauves, lilacs, pinks, soft greens and deep violets, are a nostalgic homage to the alchemy and systems of the natural and netherworlds.

The distinctive romantic, sometimes grotesque, paintings, focus on Dord’s underlying longing, (one that a large section of modern society shares), for a return to our original harmonious bond with nature. The artist views the loss of connection as linked to the way Western cultures devalue their unconscious and subliminal perceptions as they increasingly focus on materialism and profit – unlike many ancient and Eastern societies which embrace natural cycles and differing levels of consciousness within their traditions and everyday way of life.

While Dord Burrough works within the conventional genres of portraiture, still life and landscape, they are accessed through a psychedelic lens. The lushly impasto and ostensibly figurative paintings are not truly representational but are speculative and introspective visions of her relationship and self identification with nature, approached through the experience of meditative states. 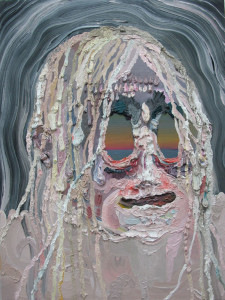 There is a history of liminal states as vehicles in the creation of art; of artists and poets who make visual the memories from altered states and levels of perception. Notable among them is the Romantic poet, Samuel Taylor Coleridge who in the late eighteenth century took opium as a dysentery cure at Ash Farm in Devon, unwittingly unleashing his unconscious with a plant extract as a conduit to an inner world and conceiving of the epic poem Kubla Khan and the pleasure dome of Xanadu.

The landscapes of Dord Burrough unfold with a latter day Flora or Ophelia, embedded in a voluptuous confection of plant life, who revels, almost wallows, in the abundance of nature in the bucolic painting Am Ende der Wald [at the end of the forest]. The artist embraces the characteristics of cacti in Cactus heart; euphoric floral lollipop explosions suggestive of the hallucinogenic and medicinal allure of cactus juice sit atop spiny, prickly stems signalling “danger, don’t touch’. A sense of total immersion and rapturous surrender characterises Bathing in the forest with birds, an exultant painted paean to being at one with nature in an idyllic floral cosmos. 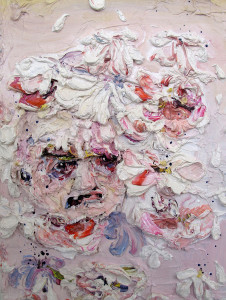 The portraits are gestural and ‘organic’ in style, many wreathed in garlands and evocative of myths, nymphs, satyrs and cultural rites. The still life genre introduces the dark side in both palette and sentiment. Indoor plant dreaming about the outside world depicts a neglected desiccated plant, constricted and parched deprived of light and its outdoor environment. A different level of consciousness, an escapist, somnolent valerian induced blissful torpor is invoked in the lavender hues of the text based painting, Sleep. In contrast is the rude awakening of I thought I would be young forever fuck, signalling our complacency in the face of the inevitable life cycle of bloom and droop.

Since graduating with a Bachelor of Fine Art degree majoring in Painting from Queensland College of Art in 2008, Dord Burrough has lived and exhibited in Germany and Australia, including ‘Test Pattern’ at Ryan Renshaw Gallery in 2012. She was a finalist in ‘The Churchie National Emerging Art Prize in 2011 and 2012 and was recently artist in residence at Level Gallery in Brisbane from April to June 2013, concluding with an exhibition, The Howling Unknown.

Dord Burrough is a contemplative and experimental artist who seeks ways to make visual her personal and the collective dilemma of our increasing alienation from the natural world and the innate self.