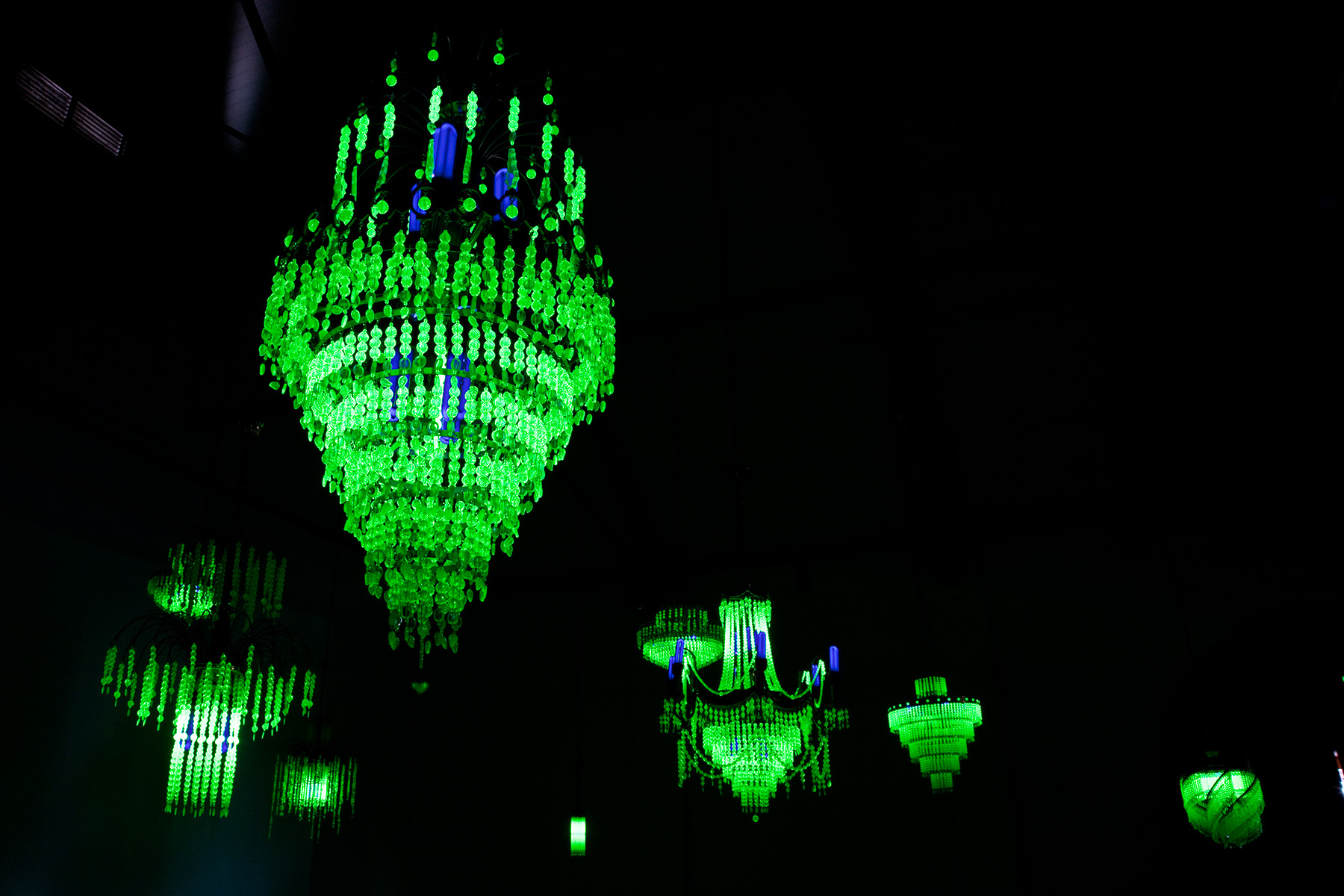 Ken and Julia Yonetani are noted for their use of unusual materials like salt and sugar to make objects of exquisite beauty which underscore the impact of human activity on the environment.

Uranium glass, which is both beautiful and radioactive, is the chosen medium for their latest exhibition, Crystal Palace: The Great Exhibition of the Works of Industry of All Nuclear Nations. It is a response to the recent and disastrous Fukushima Daiichi Nuclear Power Plant incident which followed a major earthquake and tsunami in Japan. In the exhibition, the Yonetanis focus on the phenomenon of radiation and the global proliferation of nuclear generating nations, which now number thirty-one. Uranium glass contains very small traces of depleted uranium, a by-product of the uranium enrichment process. It is legal, poses no known health risks and is a collectable in the antiques trade. Known also as Vaseline glass, it was widely used in the late nineteenth and early twentieth centuries to make sugar bowls, cake stands and other decorative objects.

The form of the exhibition is derived from the famous Great Exhibition of the Works of Industry of All Nations of 1851 housed in The Crystal Palace, an innovative architectural and engineering structure of glass and steel constructed in Hyde Park, London. The Great Exhibition was intended as a platform for the celebration of industrialisation, and displayed key products from nations around the world. In 1936, the Crystal Palace building was completely destroyed by fire, marking in the words of Winston Churchill, “The end of an era.” The Yonetanis play with the parallel histories of nuclear power, and the rise and decline of industrial power and wealth that the Crystal Palace symbolised.

The Yonetanis plan to construct thirty-one chandeliers in total which equals the number of countries that currently operate nuclear power stations. Each chandelier is named for one of these nations and is of a scale relative to that country’s nuclear output.  A selection of fifteen of these will be shown at Artereal.  Among the nations to be represented are France, Japan, Germany, Finland, China, Brazil, Romania, Pakistan and Armenia.  The United States of America, concurrently being shown at 4A Centre for Contemporary Asian Art, is the largest of the international operators and is represented by the biggest chandelier. Having no nuclear power station, Australia is not included, although it is a principal supplier of uranium oxide (Yellow Cake) for the nuclear industry.

Most of the chandelier structures are antique, but the artists have reconfigured them to take ultra violet bulbs and decorated them with specially sourced uranium glass beads in lieu of traditional crystals. The glitter and appeal of the opulent chandelier-lit windows of luxury shops and residences in the luxe precinct of Sloane Square during a recent visit to London inspired the Yonetanis’ selection of the chandelier symbol. Chandeliers are not only an item of luxury but also an extravagant emblem of the allure of electricity and the seductiveness of consumerism.

Both Yonetanis were born in Tokyo, Ken to a Japanese family and Julia to expat parents. They have been collaborating on projects since 2009 and have exhibited nationally and internationally, including the Venice Biennale in 2009 and in the United Kingdom, Finland and Germany in 2011-2012. They are recently returned from residencies in Finland and Portugal where they researched and prepared some of the objects for this exhibition.