A guitar chord is struck. As the sound consumes the space around you, it diffuses with it a purple haze. This is the experience that Jimi Hendrix was rumoured to encounter upon playing the chord E7#9. Such a response was one of synaesthesia, known as the merging of two or more senses so various stimuli are perceived not separately, but together.

It is these two primary ideas of music and psychology that inspired Sydney-based artist Amelia Tracey to create a new body of work – in the form of three mini-series – entitled Colour Me Curious.

Focusing on three songs that feature this purple chord, Tracey selected a verse from each, and, working alongside two synaesthetes, was able to have these lyrics translated so they could be welcomed not only as words, but as colours. Thinking of the synaesthetic brain as akin to a human black box, Tracey treats these colours as data, and systematically works to produce “digital paintings” that translate the respective song lyrics into a literal visual language for this rare phenomenon. The images are informed not only by their coloured counterparts, but also by the duration each lyric is held for when sung. As such, Tracey’s work juggles the aesthetically abstract with the conceptually literal.

Based on the premise that Jimi Hendrix experienced a synaesthetic response to the chord E7#9, Amelia Tracey used this idea, compounded with era, as the criteria to selecting the songs on which her artworks would be based. Researching songs that fit within these barriers, Tracey eventually settled on three songs:

To produce this mini-series, Tracey worked with two synaesthetes, Jesse Jensen-Kohl and Sigrid Boyle. She had each of them translate their alphabet into colours, and used this to generate images depicting each of their colour spectrums. Each colour was then numbered. Using the first verse from both Purple Haze and Funk #49, and the pre-chorus from Born To Be Wild, Tracey randomised the lyrics from each of these sections so the songs they belonged to were not easily identified. Jesse and Siggy were then both instructed to translate each word into its corresponding colour, where they’d simply provide each word with a number. Tracey was then able to use these colours and treat them as data, painting each song’s lyrics from the centre of the image outward. Each “frame” within the image represents a word, and the width is determined by the duration of the note when sung. As such, Tracey explores the colour differences not only between songs, but also between synaesthetes. 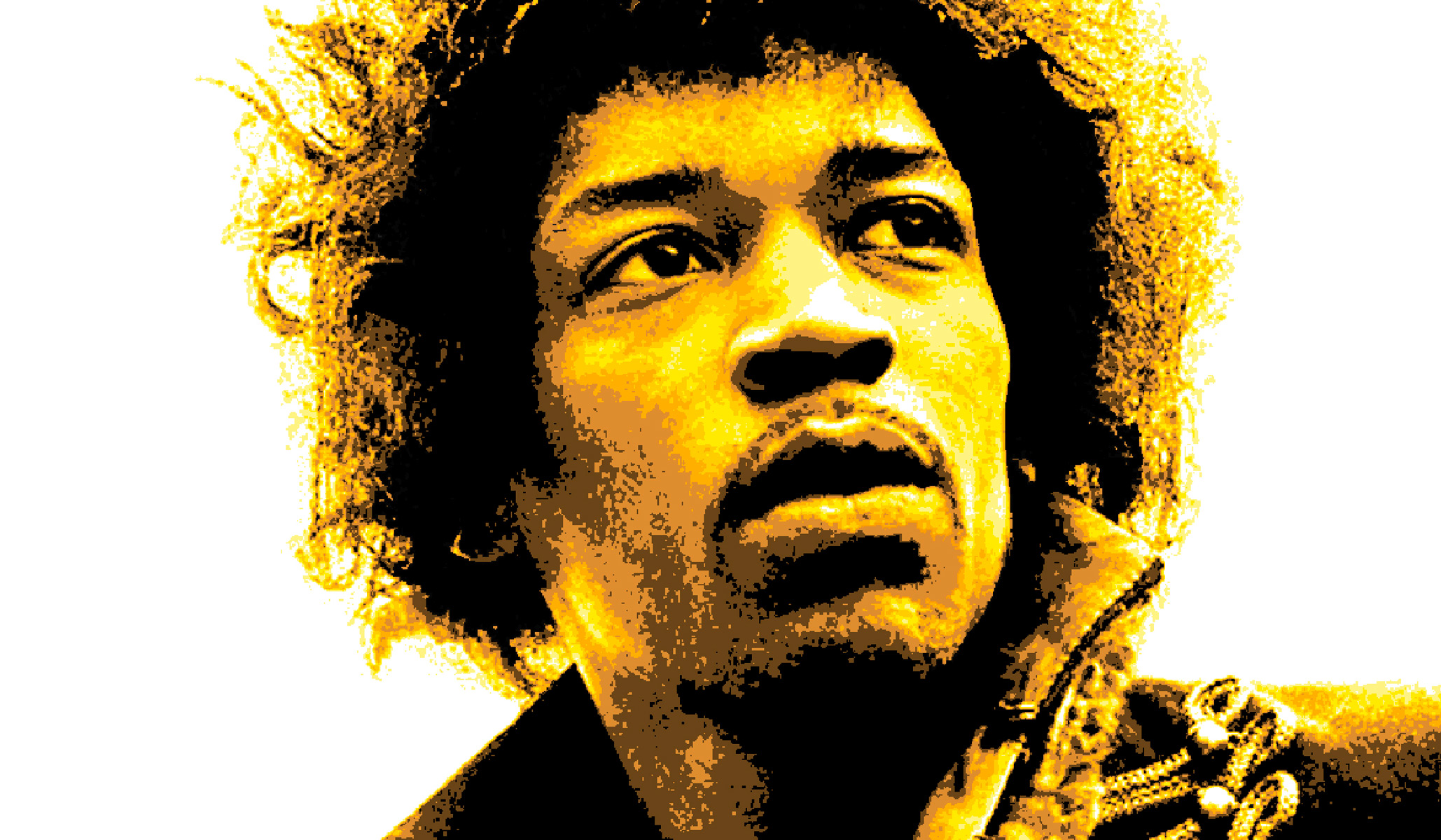 Tracey’s portrait of Jimi Hendrix is a tribute that works threefold. It is a tribute not only to the musical legend on whom it is based, but also to synaesthesia and to one of Tracey’s synaesthetic subjects, Jesse. Tracey recognises that any image that exists within a digital realm is not fluid, but instead, is the clever choreography of many, many different shades to portray an image, be it of colours or of greys. Taking only six colours from Jesse’s individual palette (excluding black and white), Tracey takes a famous photograph of Jimi Hendrix and reworks it to accommodate only these colours, digitally “painting” the image to fit within Jesse’s spectrum.

With each of Tracey’s songs selected for their use of the chord E7#9 – which is frequently associated with Hendrix – Jimi became the lynchpin for this exhibition. While this image is symbolic of data, the digital, synaesthesia and obstructions and fragmentation through colour, it is also symbolic of the way in which music and musicians unite us.

Shown alongside these print based works are a series of 7-inch vinyl records. The images featured on these records have been produced with the intent of depicting the full alphabetic colour spectrums of Jesse and Siggy. Given that the song portrayed on each vinyl sleeve does not necessarily show every colour in their spectrum, Tracey decided that to show each of their full palettes, she’d represent their colours in alphabetic chronology, where the centre cross is the letter ‘a’, and the outmost colour is the letter ‘z’. These images are a palpable depiction of just how much the colour spectrum can shift from one synaesthete to another.