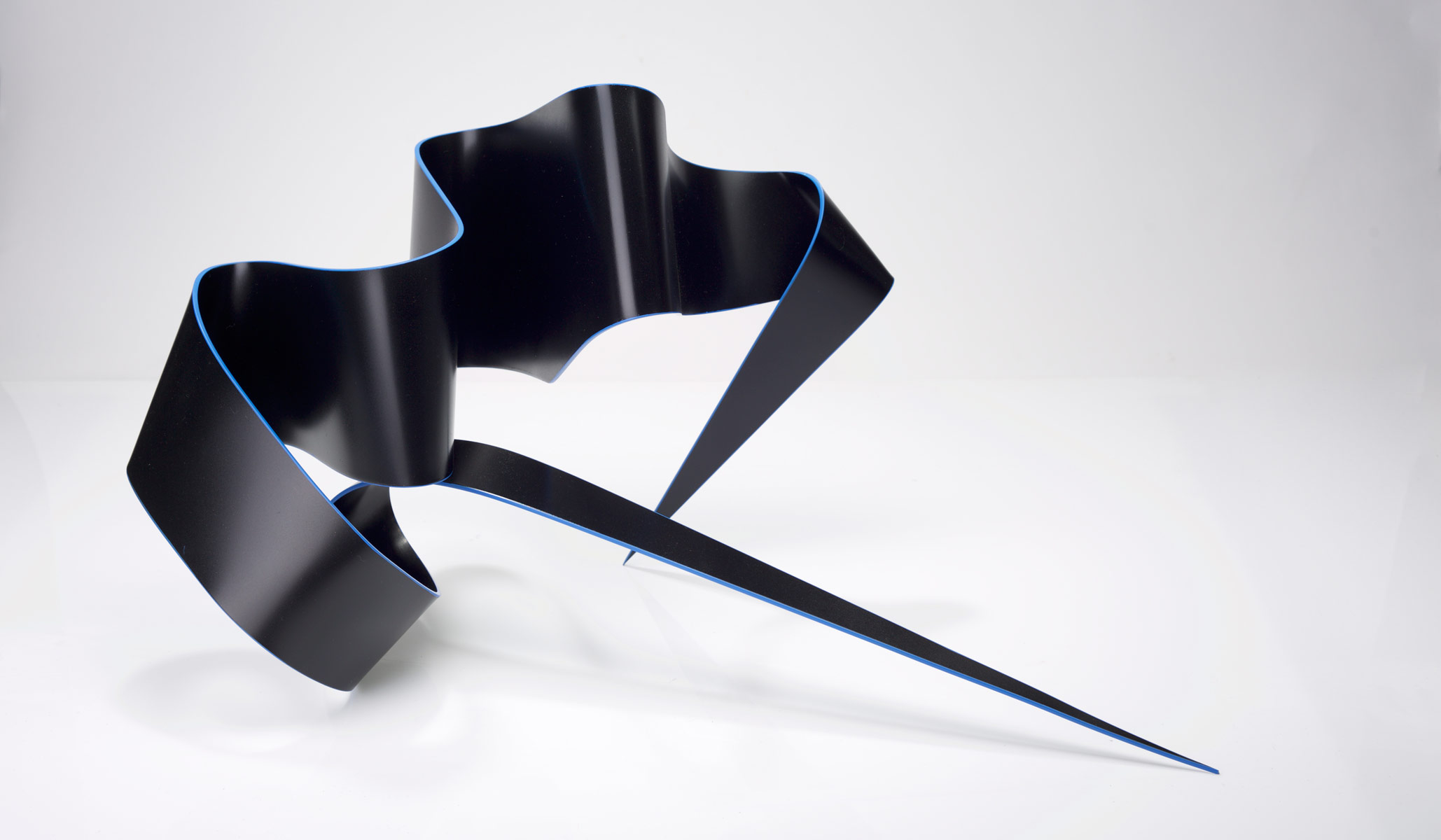 This March, as part of Art Month Sydney, Artereal Gallery is proud to present CHROMA, a solo exhibition of new sculptures and paintings by Yioryios Papayioryiou.

Panel Discussion:
Art and The Legacy of Architecture
Saturday 16 March at 1pm

Colour is fundamental to Yioryios’s painting and sculpture. He works with colour on a daily basis both as an artist and in a paint product-testing role he has with an artists’ supplies distributor.

Yet perversely, colour is only one percentage of the surface areas of his sculptures or the picture-planes of his paintings.  Ninety-nine percent is covered in dense, black paint laid on in multiple painstaking layers, to the degree that he laments of his paintings ΧΡΩΜΑ I-VI, ”…these paintings have taken my soul!”

His sculptures visually translate his physiological and psychological responses to constructed space, both architectural and natural. Yioryios sets out to capture movement through time, through space, through light, through colour. His works are reflective of flux, of fluidity, of change; both his sculptures and paintings transform depending on their angle of placement or location of the viewer. 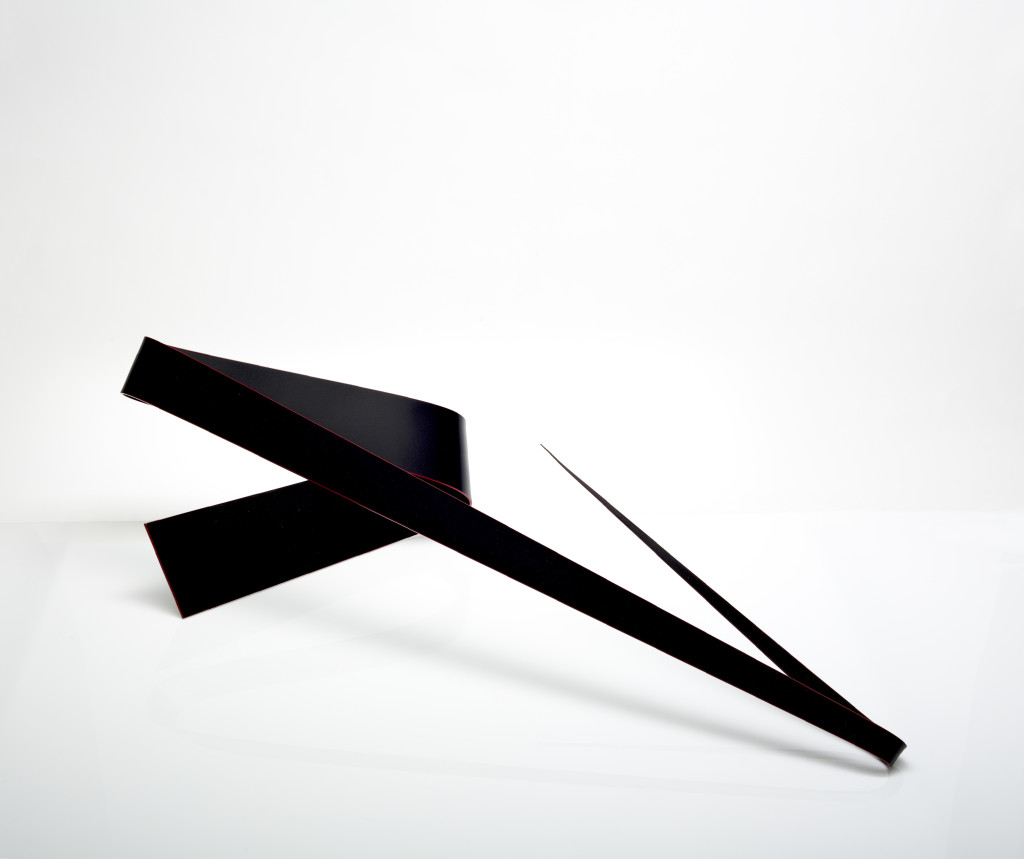 “Underlying my new works is a fascination with the symbiotic relationship between the use of colour & non-colour. My work is about identifying which one has a greater influence over its viewer.

Even though my colours are limited, I believe the 1% of colour which I’ve used in my works triumphs over the black. My paintings and sculptures therefore gradually reveal hidden colours and lines, defined by the morphing negative spaces which they contain. Through this new series I continue to explore the concepts of peeling back the formalities of colour and shapes in order to reveal their strengths.” 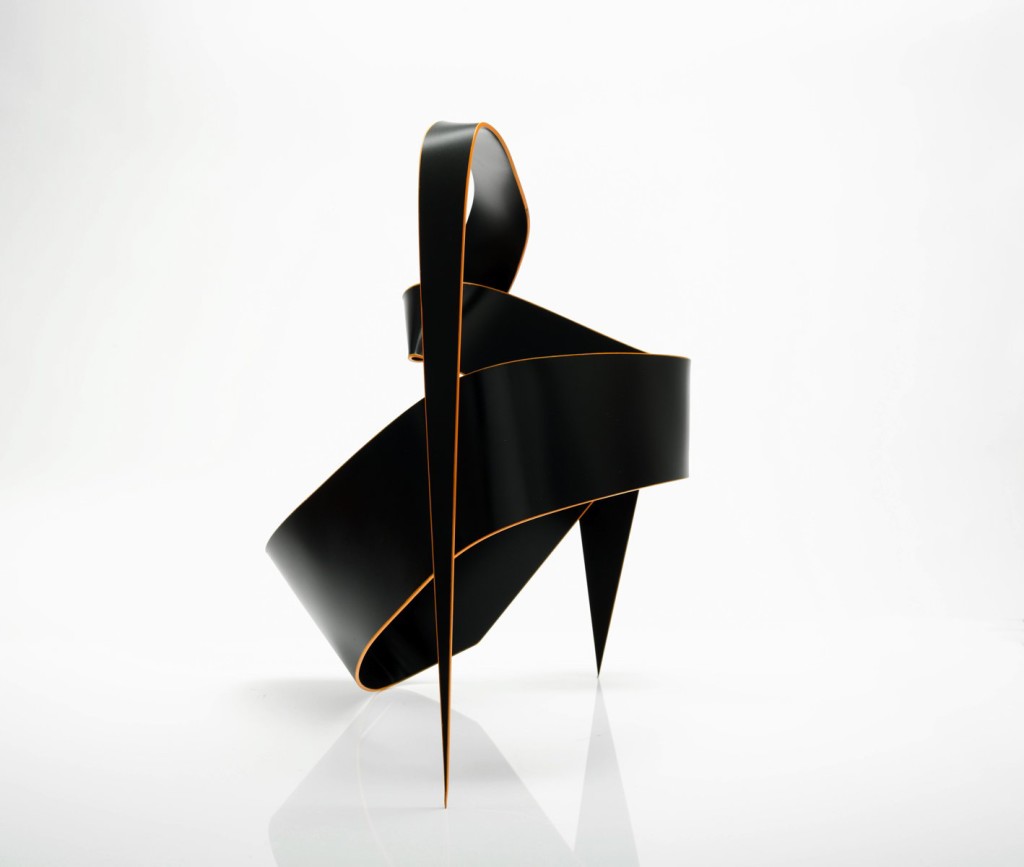 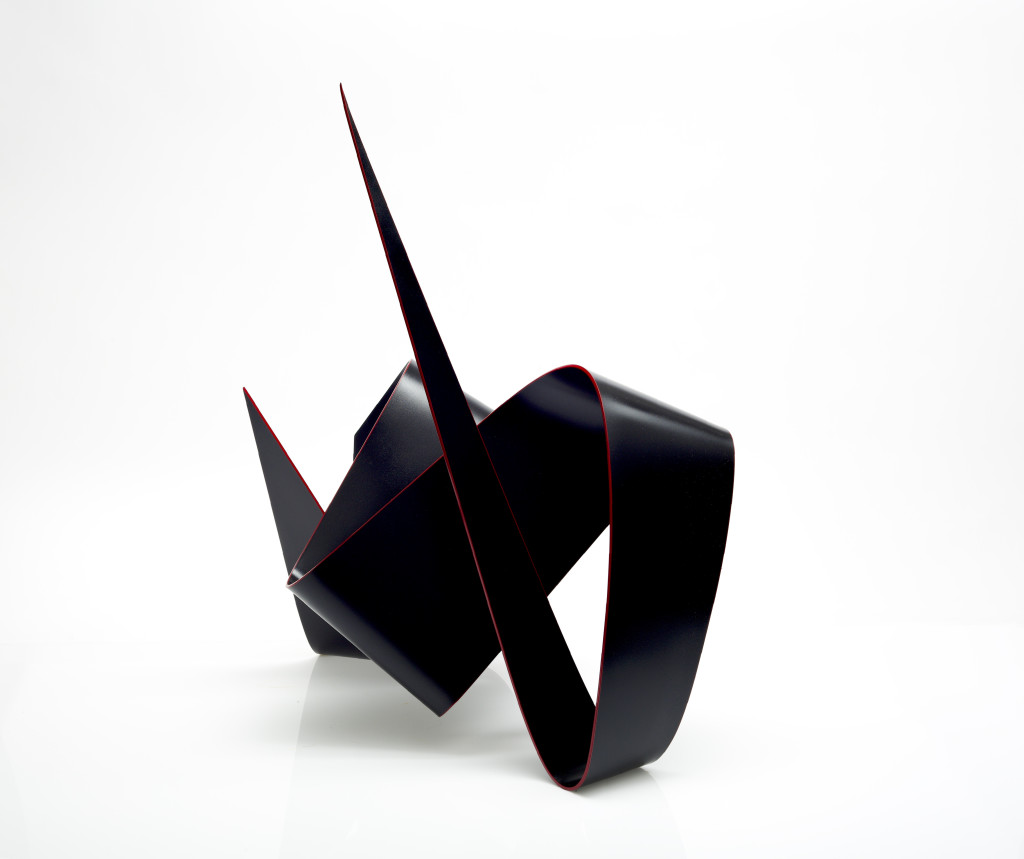 Whether forms are organic or angular, the aluminium and steel sculptures Chroma 1-6, are created using a bending technique and all are conceptually vested in enfolding or enhancing a spatial void.

The sculptures are finished in Carbon Black automobile paint and Ivory Black synthetic polymer on paintings. Colour is confined only to thin minimal borders to contour the sculpture or define the intersection of a painting plane as the eye tracks along the line of colour.

Pure pigments in colours of sizzling Cadmium Orange, intense Cobalt Blue, and Cadmium Red suspended in a fixative medium tighten the weave and coat and infuse the raw linen stretched over large wooden frames in the first of multiple campaigns and stages of creating the series of paintings ΧΡΩΜΑ I-IV and the mega paintings ΧΡΩΜΑ V-VI.

Twelve laborious coats of dense black paint and long drying phases for each layer follow. The exception is ΧΡΩΜΑ IV where in an explorative departure a deep violet pigment is substituted for black.

A slit is cut into the paintings after the twelve layers of paint have dried. This necessitates removal from their stretchers. The painting is scored across the weave of the linen, a technique developed following much experimentation by the artist with the applied pressure and angle of the cutting tool for mastery of how best to get the cleanest fray-free slit to form a “rise”  – which is Yioryios’s chosen name for the seam in his paintings.

The ‘rise’ acts in Yioryios’s paintings in the manner of a ‘reveal’; to highlight the intensity and purity of the under-painted colour; to expose and focus on the power of colour to excite, subdue and transform, and to even withstand the challenge of the heavily clotted impasto surface of ΧΡΩΜΑ III. Despite the cut being purposeful on Yioryios’s part, the concept of the ‘rise’ in his paintings is within the spirit and technique of Japanese Kintsugi where gold pigment is mixed into ‘glues’ to enhance the beauty of a repaired  object’s ‘scars’.

Yioryios’s cuts are calculated and careful. They are not in the manner of the violent gashes of twentieth-century Argentina-born Italian artist Lucio Fontana’s fissures that opened gaping voids in his monochrome paintings. Yioryios ‘heals’ his gashes with a reinforcing zip of linen applied to the back.

But Yioryios can be associated in his approach to his art with Lucio Fontana and his advocacy of Spatialism, a form of art-making that aimed to eliminate the boundaries between architecture, sculpture and painting. Contemporary architecture, notably that of Harry Seidler and of Jørn Utzon has been a conceptual influence in Yioryios’s practice to date. More recently, in 2018, during an artist residency in Athens, Yioryios went daily to The Acropolis, sketching and researching the Parthenon’s architecture, in particular the rise and fall in the fluted surface of its supporting columns. And he wonders if the ‘rise’ in his new paintings is an inadvertent crossover from that architectural experience.

Splitting his time between Athens, Greece and Sydney, Australia, Yioryios is an emerging artist whose work explores the boundaries between painting, sculpture and architecture. Graduating from the Australian National University with a Bachelor of Visual Arts with Honours in 2014, Yioryios has since held numerous solo exhibitions and been invited to participate in numerous group exhibitions at spaces such as Artereal Gallery, M16 Artspace and Belconnen Arts Centre.

In 2015 and 2016 Yioryios was a finalist in the Woollahra Small Sculpture Prize and his work was featured in Artist Profile magazine and Habitus Living. In 2016, Yioryios was commissioned to create a large scale, site-specific sculpture for ANZ headquarters in Melbourne.

In 2017 he was commissioned to create a site-specific sculpture for the Crown Casino on the Gold Coast. In 2018 Yioryios was invited to participate in ‘Monocchrome: Empty and Full’ at Margaret Lawrence Gallery at the University of Melbourne. In May 2018 Yioryios completed his first international residency in association with the Athens School of Art in Athens, Greece.