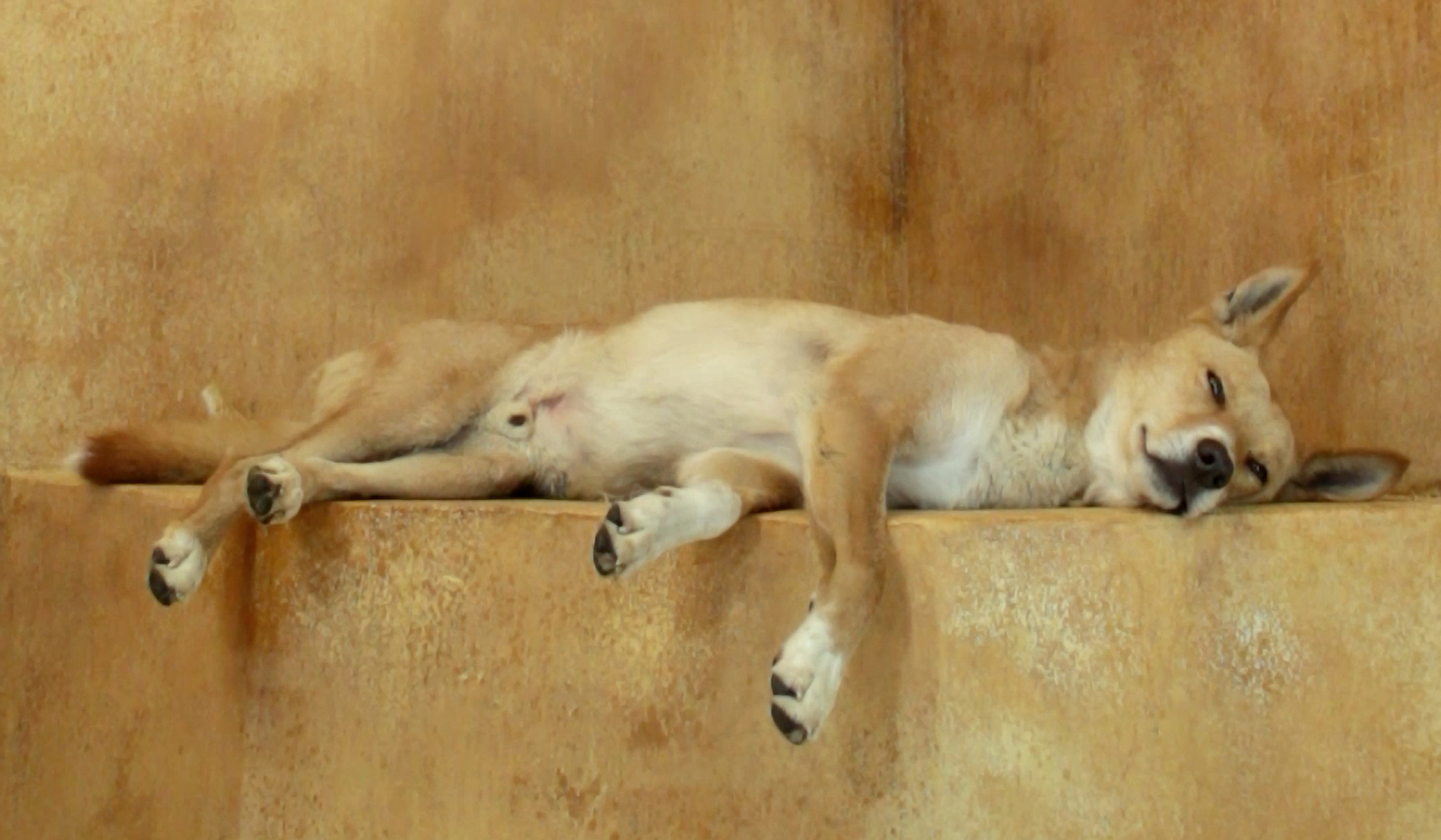 To view and purchase artworks from this series scroll to the end of this webpage or visit the gallery before 31 March, 2021.

The catastrophic fires of Australia come as no surprise to many. They are just the latest manifestation of the ecological and cultural destruction that has unfolded across Australia under European occupation.

But, they are also something new. Not just in their ferocity and scale, but in their triggering of a broad, deep, human reckoning.

As I returned to Australia this week, I descended into a smokey haze, the ashes of countless sacred places and sacred creatures mixed with the toxic stench of burnt cars, plastics, houses and roads.

Precursors to these fires have been creeping, ominous and equally horrifying in scale. In 2019, 25,000 spectacled fruit bats (a third of their entire population) died of heat exhaustion in a single afternoon. Since 2016, more than half of the great barrier reef (the Earth’s largest living entity) has died due to ocean heating, the prognosis for the rest is essentially terminal. In the Southern summer of 2018-19, millions of fish died in a series of mass die-offs in Australia’s iconic Murray-Darling river system, now toxic and de-oxygenated. So far this summer at least one billion native animals have been burnt or choked to death in the wild fires – a figure that doesn’t include bats, insects and amphibians.

These are losses for which there can be no realistic hope for natural recovery, within whatever remains of our own human history.

These are not the early stages of mass extinction and ecological collapse. We are already far down that line. The majority of Earth’s wildlife and ecosystems have been destroyed and consumed by industrial Modernity, much of the world’s megafauna destroyed before that. The nature that remains is depleted, fragmented, fragile and forever changed.

This depth of environmental grief is not new either. It has existed for centuries. Aboriginal Australians, like most indigenous peoples of the world have been suffering a perpetual grief since the first moments of European invasion of their beaches, forests and nations. Ensuing centuries of genocide and dispossession; denial of cultural duty to country; and witnessing the desecration of a land and nature they had been embedded in for 100,000 years. The complexity and intimacy of indigenous environmental knowledge, science and philosophy is likely beyond most Western imagination. The complexity and depth of their grief, even more so. Although perhaps now, many others have had a glimpse of a comparable pain.

Over the past weeks while watching the fires unfold, I have been relentlessly haunted. Flooded by the memories of each and every profound encounter I’ve ever had with an animal in Australia’s forests and bush lands. The depth and intimacy of our exchange replaying in my mind as I lay awake with an aching heart. Of all the ways I’ve imagined this unfolding, this suffering and loss of wild animals was beyond my imagination.

Within these depths of my own despair, a life-time of environmental grief and anxiety has definitively shifted. It has crossed a new line. A place where enduring loss and sadness is accepted, embodied, and galvanised into a recognition of absolute duty, to our planet, our biosphere, and to each other – plant, animal, river or human. This can be our only purpose, to save everything we hold dear and help it flourish. To focus on what has real meaning, to turn away from what human ‘civilisation’ has been reduced to. To re-embody our own power and empathy. To feel ourselves recover and flourish alongside the forests. To re-inhabit a culture of life rather than death. 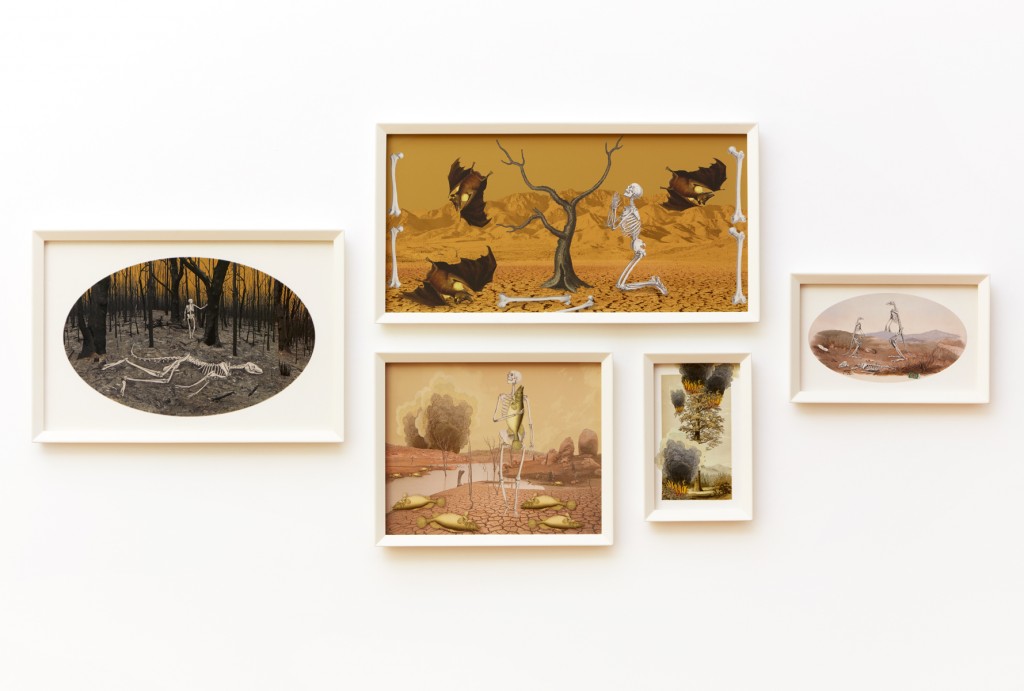 2020’s catastrophic worldwide events have precipitated a time for pause and opportunity for correction. This crie-de-coeur was captured in the words of US President Biden at his 2021 inauguration: “The cry for survival comes from the planet itself, a cry that can’t be any more desperate, any more clear!”

It is a plea that is central to artist Hayden Fowler’s life and artistic practice. A lament for the human condition; of living on the land but being ignorant of it.

In common usage ‘captive born’ applies to animals born in captivity – in zoos, circuses, research and conservation programs. For Hayden Fowler it is the plight of contemporary humanity, ‘captive born’ over centuries into a loss of autonomy, of knowledge systems and of culture. Alienated from our place within the universe, a legacy of patriarchal capital systems and domination of peoples, species and lands; culminating in mass extinctions and ecosystems collapse.

The 2019 bushfires in Australia and the preceding drought deeply influenced Hayden’s latest exhibition.  As have recent artist-residencies in Berlin and Moscow with time spent in distressed bark-beatle-ravaged forests and interacting with captive born wolves, seeking to reawaken aspects of the lost innate human communication with animals.

The realities are grim, yet the elegiac exhibition Captive Born is infused, aesthetically and philosophically with a sense of transcendence of spirit, of resistance and enlightenment.

A lone Dingo, the artist’s companion and muse over the last four years is the subject of video, Captive Born 2020. An eerie acid-orange light leaks through a dirty sky-light, illuminating the barren space where the Dingo stands, paces and sleeps; confined within a neglected zoo exhibit reminiscent of the 1933 Hobart zoo footage of the last living Thylacine (Tasmanian Tiger). A similar regime of extermination now plays out in Australia for the Dingo. But despite its situation, the Dingo demonstrates sentience, serenity, a patient calm, an all-knowingness…

Scenes the artist encountered when visiting forests shortly after the fires are memorialized in his video She-Oak: “There was an overwhelming sense of a massive physical force having moved through, something utterly not organic. The whole vast area felt completely sterile, yet its energetic presence remained in the air, the closest thing I could imagine to a nuclear blast site.”

Digital drawings, a mix of landscape, fire and drought images montaged with eighteenth and nineteenth-century botanical and zoological renderings host an enigmatic skeleton figure. Is this transcendent go-between a guise for the artist, bearing witness to fire and animal die offs; a spectral ancestor guardian walking Country, or a harbinger of extinction – grim manifestation of the future for humanity?

Blankets, as artefacts of ritual, in the way of mantles or cloaks, as well as their conventional associations of care and protection are stitched with texts, including lyrics from protest artist Anohni’s climate-change anthem ‘4 degrees’. These scarifying words conjure the apocalyptic death of the world’s creatures and mourn the desecration and disrespect of the sanctity of “Temple Earth”.

Blankets as objects hold personal meanings for Hayden: “The humblest of human protections, these raw blankets suggest the human form. They were also intrinsic objects of European Invasion. The style of blankets and the lettering and stitching was something I remembered from objects made or held by my Grandparents and Great Grandparents, dating from the late nineteenth and early twentieth century when these materials and techniques were commonplace. I have a strong memory of the stitching, the musky old blankets and in particular the individual font of my Grandmother. The stitching of these felt like a connection to a deeper lineage. But while my Great Grandparents were occupied with draining swamp and burning off forest on ‘confiscated’ Maori lands, I was somehow trying to reconcile this legacy.”

“To feel ourselves recover and flourish alongside the forests. To re-inhabit a culture of life rather than death”. 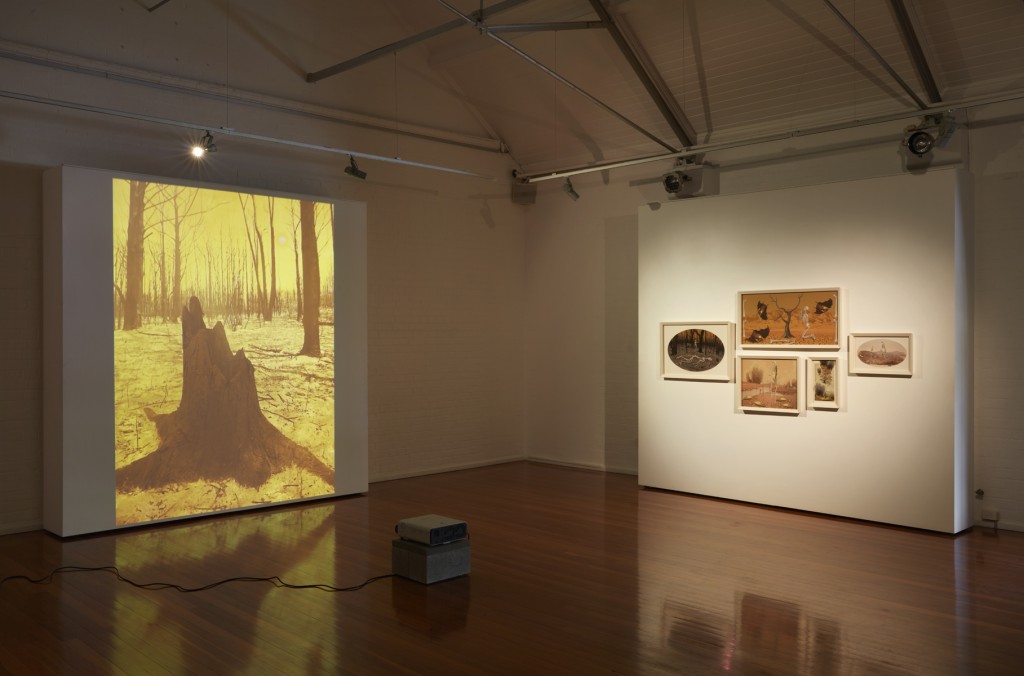 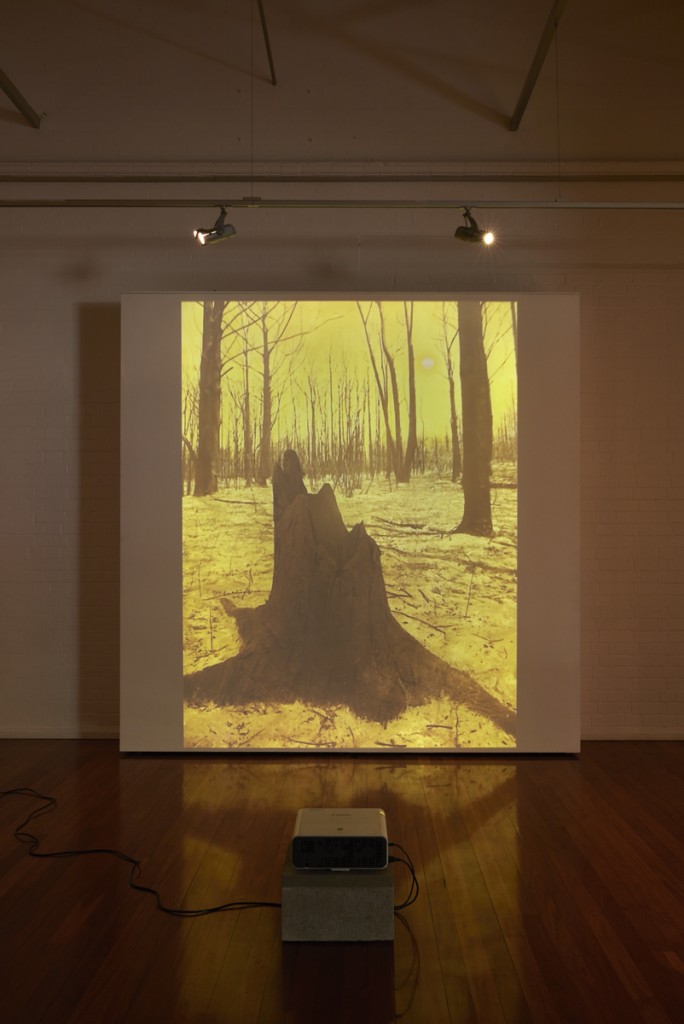 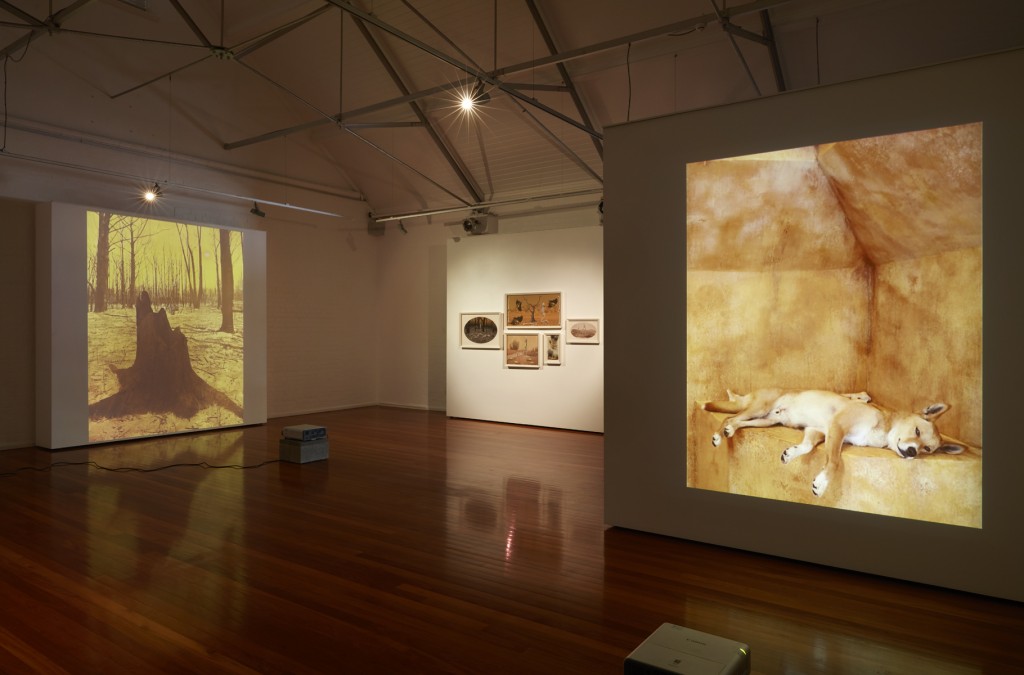 This project has been assisted by the Australian Government through the Australia Council, it’s arts funding and advisory body.

The Great Dying (i)

I wanna burn the sky