Cherine Fahd’s Camouflage series of photographic self images runs counter to trend in this age of narcissism when the cult of the ‘selfie’ is rampant and its forms of digitally generated self portrait, typically taken with a handheld smartphone, are destined for upload and maximum dissemination via social media networks. 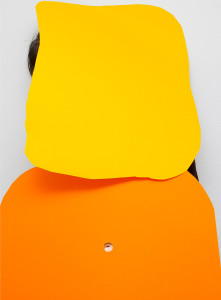 In a game of disguise, of ‘now you see me – now you don’t’ in her recent Camouflage works, Cherine Fahd seeks to conceal as much as she reveals of the self in a continuation of her quest since 2006 to test ideas of disclosure in portraiture.Cherine Fahd subverts the convention of photo portraiture where the face and body are the focus. In Camouflage they are mostly hidden; concealed behind geometric planes of intense solid colours which allude to the style and visual language of painting and hard edge abstraction. The coloured expanses are interrupted with only the minimal protrusion of a part.

Cherine Fahd’s earliest encounter with being photographed was posing for a studio portrait with her sister at the age of four. The artist experienced an intense sense of disappointment when the image did not accord with her own internal sense of self. Since 2006 she has made self portraits in which she hides her face to complicate the depiction and interpretation and to test ideas central to portraiture that encompass staging and performance in the face of the camera, the interplay between everyday reality and the reconstruction of that reality through photography. In Camouflage this paradox of self-portraiture, not as autobiography, but rather as fiction is introduced and explored.

She is currently working towards developing a body of work titled, Decoy, that will on from Camouflage. Decoy will involve another body, either in conjunction with or instead of her own as a subterfuge to complicate perceptions of the sitter and subject and self. Cherine Fahd lives and works in Sydney. She is currently a PhD candidate at Monash University, Melbourne and Lecturer in Photomedia at Sydney College of the Arts at the University of Sydney. Fahd completed a Bachelor of Fine Arts with first class honours in 1997 and in 2003 a Master of Fine Arts by research, both at the University of New South Wales, College of Fine Arts.

Fahd’s work is represented in major public collections in Australia such as the Art Gallery of New South Wales, National Gallery of Victoria, National Gallery of Australia, Artbank, University of Queensland Museum, University of Wollongong Collection, Monash Gallery of Art, Gold Coast City Gallery, Albury City Gallery and  Casula Powerhouse Art Centre. She is the recipient of numerous New Work grants from the Australia Council for the Arts along with art awards and residencies such as the NSW Women & Arts Fellowship from Arts NSW, the Josephine Ulrick and Win Schubert Foundation for the Arts Photography Award, the National Photography Prize and the Moya Dyring Studio from the AGNSW.