Bury the sun and all its demons
View Exhibition

“No matter how dark the ideas behind them get, I want my works to seduce. Like a sugar coated piece of slowly rotting fruit.”

Louise Zhang is a Chinese-Australian artist who has developed a cult following for her alluring and fascinating paintings, sculptures and installations which mash together references as diverse as horror films and Chinese mythology, all articulated in the artist’s signature sugary palette. The seductive relationship between attraction and repulsion is key in Zhang’s practice – she is an artist who has become known for work which explores the dichotomy and tensions which exist between the beautiful and strange, the monstrous and cute. Louise’s work may be familiar from her collaborations with the Museum of Contemporary Art Australia, 4a Centre for Contemporary Asian Art, the City of Sydney and Carriageworks. Having showcased her work since she first emerged in 2014, Artereal is excited to present the work of an artist whose unique artistic vision is now immediately recognisable. 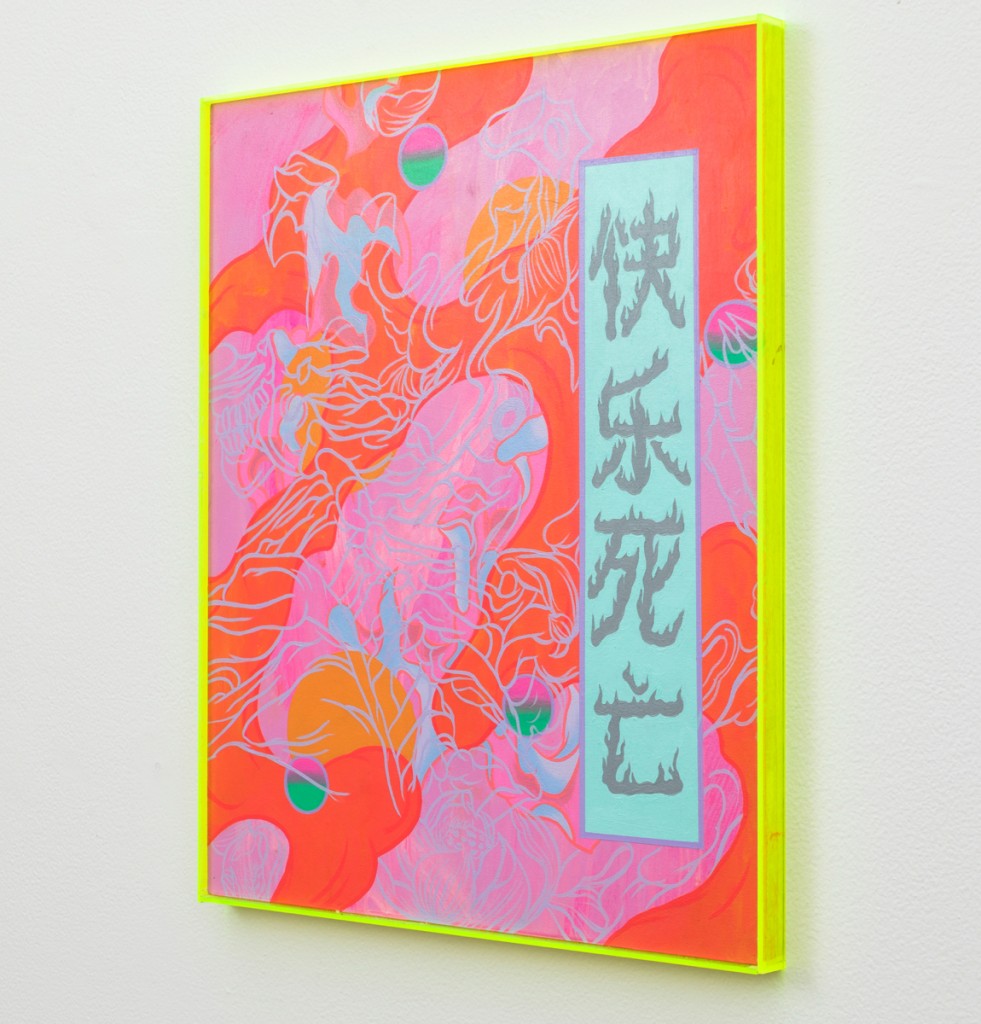 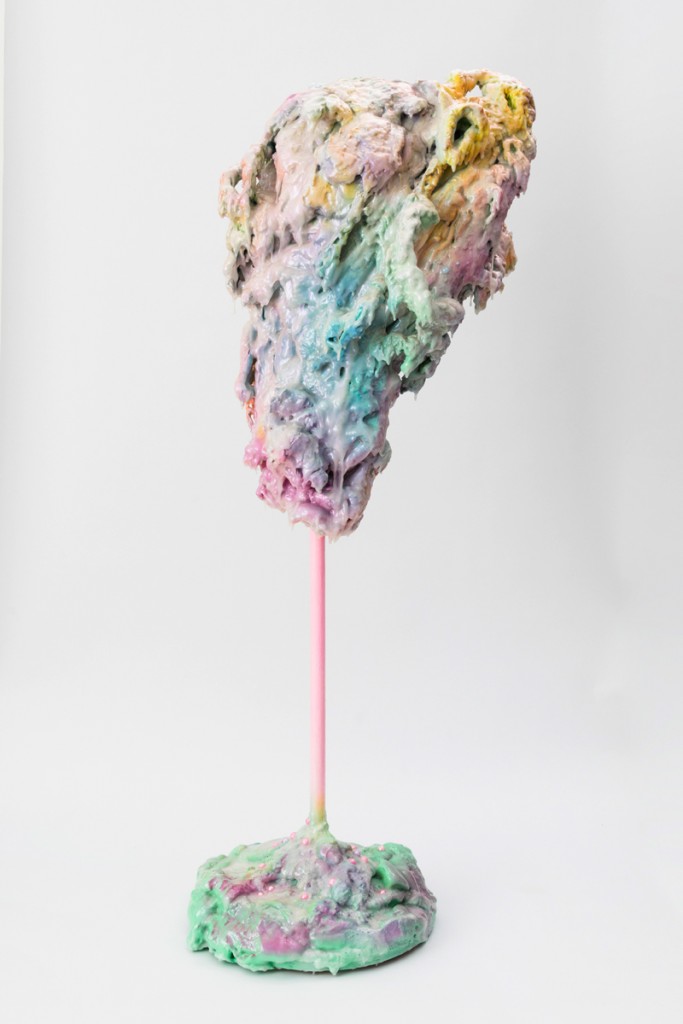 “For me this new body of work has been about gathering my thoughts and working through my position as a Chinese-Australian human being. Growing up in a strict Christian family, parts of my identity felt at odds. For example many cultural aspects of Chinese heritage concerned with mythology and tradition were considered taboo and remained shrouded in mystery. Likewise my personal fascination with horror movies was seen as blasphemous and was forbidden. Through my paintings, sculptures and installations, I am now able to begin to reconcile my personal histories with my own lived experiences of the world as a third culture kid. Populated by scholar rocks, moon gates, skeletal remains, dragons and Chinese demons, these new works are a mash-up of my ongoing fascination with horror movies, obscure references to the darker side of religion and visual references to Chinese culture.” 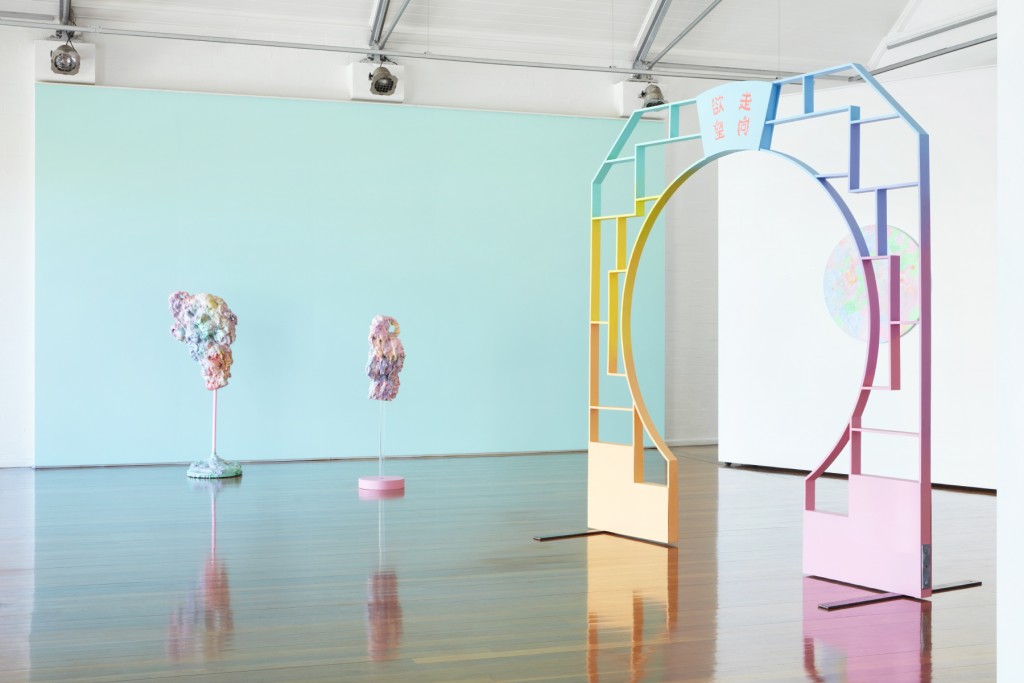 Louise Zhang’s candy-coloured latticed Moon Gate is a tantalizing portal into the push-me-pull- you beauty and repulsion of the demi-realms of Bury the sun and all its demons.

Her visual language is complex and ambiguous.

Seductive pastels from Pop culture and the screen based technologies of her ‘digital native’ generation sugar-coat and mask the psychological intensity of an underbelly of supernatural narratives, ghouls, skeletons and hellfire from old school horror exquisitely rendered in a fusion of Chinese Literati painting style and the cut-outs and linear overlays of cartoon.

Her art is a continuing dialogue. Transformation is at its essence and reflects her personal history as ‘not quite Australian, not quite Asian’. She describes “… being a kid from a migrant family, born in a country where your parents aren’t originally … it births a new culture. I am a Third Culture Kid.”

Discouraged in childhood from engaging with the traditions, superstitions and mythologies imbedded in Chinese culture by her Christian upbringing Louise perversely immersed herself in Western and Chinese horror cinema, particularly body horror, with Kronenberg’s The Fly an absolute favourite.

The concept of metamorphosis is absorbed into Zhang’s practice, with the visceral pervading her negotiation of horror as an art form, as medium, method and symbol. It manifests in the melding, moulding and reforming of viscous solidified slime and the bulging abattoirs bondage aesthetic of her trussed, suspended and skewered ‘blob’ sculptures. Their uneasy grotesquery is ambiguously shrouded in saccharine lollypop pastels.

Undertaking a Beijing artist-residency in 2014, disparate influences were a way into navigating identity and her evolving distinctive style. Louise embraced the sculptural possibilities of scholar rocks, ancient, weathered and porous objects related traditionally to the mystique of mountains and prized for their asymmetry and awkwardness. She engaged with the rich decoration of embroidered robes and the symbolism of flowers like chrysanthemums and lotus and the celestial significances of the circular motif of the moon in garden architecture. And indulgently explores folklore and the depths and macabre ordeals and monsters of Chinese Hell, a maze of eighteen layers and ten courts with a king in each. Everyone goes to Hell but stays or leaves on the court’s assessment of deeds.

Calligraphic text is a recent element in her works. Bizarre titles, Happy Death and Skeleton Romance hang as solid colour strip banners in paintings, the traditional characters embellished with hell-fire flames. Homilies are written in both English text and Chinese characters and inscribed on cartouches at the apex of the arch above the circular doorway of Zhang’s Moon Gate sculptures.

Louise Zhang’s Bury the sun and all its demons is a fantastical and macabre installation of beauty and strangeness of playfulness tempered with tradition; a contemporary parable of the quest of a third culture kid.

“My latest series of paintings were in part dictated by my hand. Suffering from chronic pain in my wrists, my painting style has shifted towards a subtly more graphic style. Looking to vintage horror film posters for inspiration, I also began to think about including text – which led to the idea of including obscure personal references. The Chinese characters in one particular work spell out ‘The Devil’s lions’ – a reference to a quote from the first book of Peter in the bible that always haunted me as a child. This is probably the first series of artworks I have made where I have given myself permission to explore more personal thoughts and past experiences – so for me, these works are laced with anxiety and confusion as I try to make sense of my culture/s and my own sense of Chinese-ness. Having said that, I have embraced colour and integrated beautiful imagery such as peaches, lotus flowers, the sun and the moon, because these works are also about a sense of personal empowerment and are underpinned by hope.” – Louise Zhang