Anna Carey focuses on architectural spaces as a medium to open up an imaginative realm for the viewer, inviting us to enter into the shadows of our stories and of collective memory.

Her works continually prompt responses of “This is strangely familiar“, and “We went to a place just like that…” Art itself can be seen as a technique of remembrance. It not only embodies a part of our collective memory but by its nature is a vehicle in the construction of memory, a form of visual vernacular that communicates between generations and contributes to a pool of our shared knowledge. The urban environs of the Gold Coast where Anna Carey was born and has lived until recently are the focus of her practice. The artist constructs fragile cardboard architectural models, which she documents as video and photographs to express and access a psychological sensibility beyond the physical façades presented.

Hers is a point of view recorded and filtered ‘beyond memory’. The works in Blue Angel are “Paramount places“– the stuff of movies and studio back-lots which is very similar to her way of making art – and where memory can select, arrange, retouch, lie; where distortions and disconnections exist yet they are no longer recognised. Anna Carey’s latest works in Blue Angel are a fictive conflation of the spatial experiences and architecture of three cities. Los Angeles and Las Vegas are integrated into the Blue Angel series, as they are cities to which the Gold Coast has looked for inspiration. They are places that are created, copied and cloned. The artifice is intensified in the architecture and like a game of Chinese whispers the original gets lost in the repetition and in the remaining versions of versions of versions. 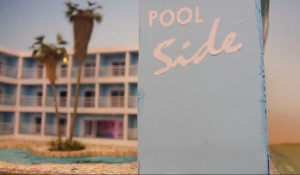 These three cities Anna Carey describes as: “largely built on the idea of change and fantasy translated into the urban landscape. Simulacra – the recognition of sites vaguely familiar to that known elsewhere, and transient, ‘passing through’ spaces and architectural illusions, are all part of the experience of these cities. The imitation of fake realities becomes its own reality, which is then duplicated in all three cities and in turn creates a confusing post modern spatial experience.When experiencing these deceptive spaces my memories of the Gold Coast resonate with my new experiences in the USA. The art making becomes a process of overlapping multiple memories to create hybrid spaces drawn from and common to all three cities”.

The US has represented itself through film and created fictions of sense of place and of the city, creating filmic sites that a collective narrative is built on. Anna Carey’s backdrops too are cinematic, with the diffuse twilight of painted skies and trees from wire and paper replacing the natural landscape settings and Gold Coast glare against which she photographed models in previous works.Anna Carey’s images bear titles from the signage favored by the regions’ real estate developers and movie makers: Blue Angel, Pool Side, Hill Haven, Costa Vista, and New Galaxy; the exoticism and eroticism of the signs fuelling a fantasy beyond that of the prosaic architecture and locations. 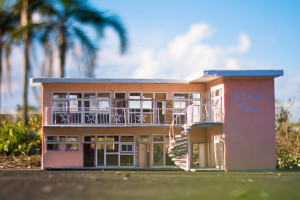 Blank neon signs, such as that depicted in Blue Angel enhance the aura of unreality and disorientation and they fascinated the artist on her recent US visit that included the site of a Neon Graveyard in California. The dominant signage and freeway billboards that characterized the landscape and developed with the car culture for communicating messages to tourists and passing cars to lure driver pull-in are disappearing because of the internet and Google maps. The structures remain but the neon texts are removed as the old attention-getting fonts are not consistent with or don’t suit the brand image fonts of the website.An accompanying video work Unroll is a non-narrative montage. The focus wends in and out of the different interior and exterior spaces of the architectural models; moving past images as if in a car, and much in the way we experience and transit the city. Recreating different moods and scenarios, lights on, eerie lights out, it reveals parts of the models not seen in the photographs and insights into process.

Anna Carey’s model making started as a study of spatial practices at art school with artist Alfredo Aquilizan as her teacher. The photography developed as a means of documenting space. Since graduating from Griffith University in Queensland in 2010 Anna has been awarded an Australia Council Emerging Artist New Work Grant and her works acquired for the collections of Artbank and The Gold Coast City Art Gallery and major corporate and private collections. She has shown consistently with the Queensland Centre for Photography who took her to Photo LA in 2013 and her work is being curated into regional gallery and other significant institutional exhibitions. She is currently undertaking study towards a PHD.