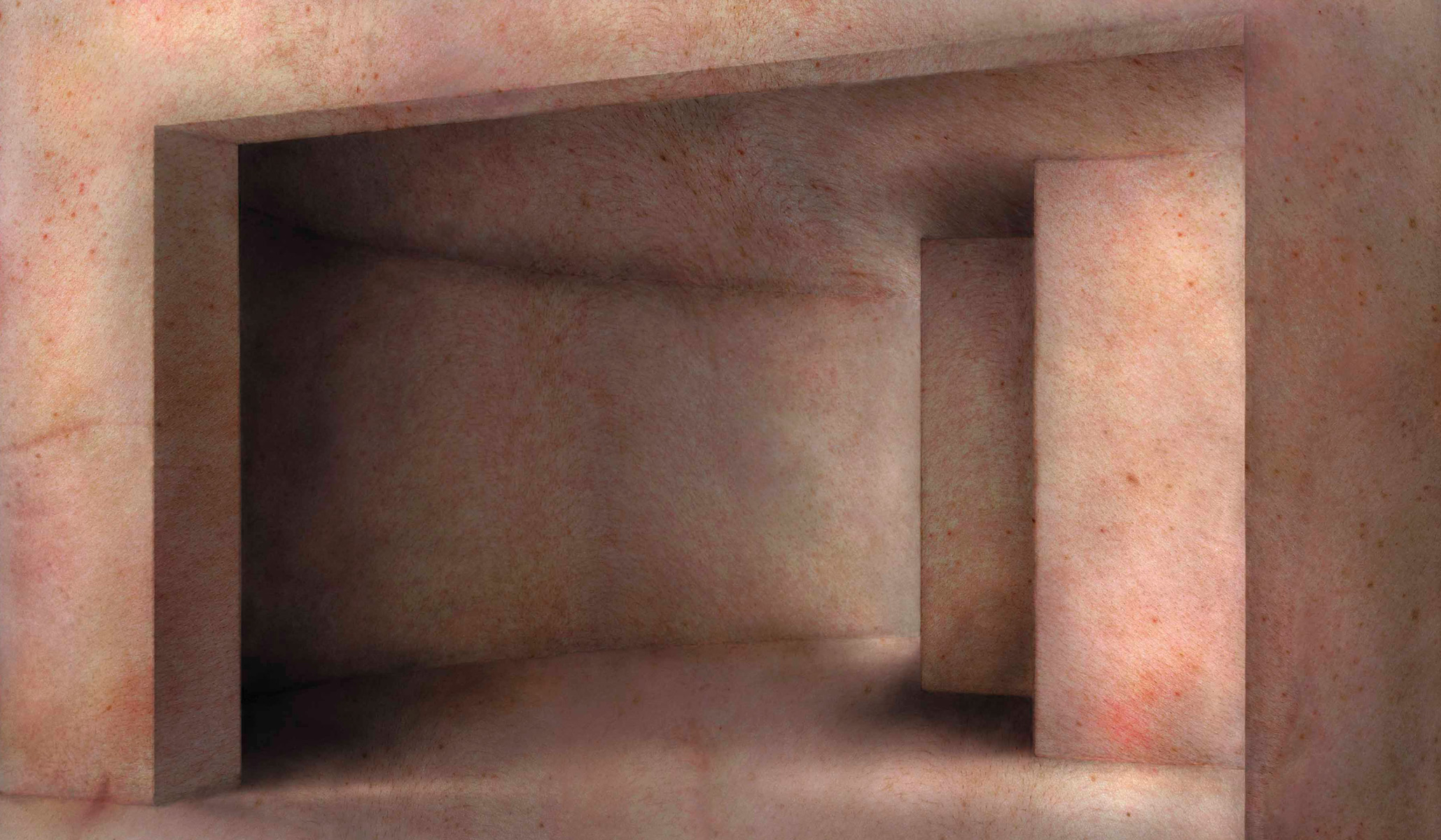 Synaptic Bliss, features a series of digital prints and video projection by the New York-based duo Aziz+Cucher, whose 25-year artistic collaboration has produced a significant and fascinating body of work now held in many important collections around the world, including the National Gallery of Australia.

Anthony Aziz and Sammy Cucher are widely regarded as pioneers in the field of digital photography with dozens of solo and group exhibitions to their credit at such prestigious venues as the Photographers’ Gallery in London, the Venice Biennale, the Reina Sofia in Madrid, National Gallery in Berlin and the New Museum of Contemporary Art in New York.

Throughout their artistic journey together they have explored their interest in blurring the distinctions between the human body and its environment, the exterior and the interior as well as the organic and the artificial, with often startling, always mesmerising results.

The works featuring in Synaptic Bliss, an ongoing series begun in 2003, are no exception. Featuring  magical landscapes of intricately layered patterns, shimmering texture and exuberant color, the exhibition includes the beautiful Nocturnes and Odes as well as a new single-channel video projection, to receive its world premiere at Artereal. The exhibition also features a selection of large-scale digital images from Aziz+Cucher’s 1999/2000 Interiors series of extraordinary ‘skin-covered’ rooms – strange prosthetic environments in which human skin becomes a reflective surface in the same way as certain insects of the forest reflect their surroundings.

Synaptic Bliss is the first Australian solo exhibition for Aziz+Cucher and as the launch exhibition for Artereal marks a prestigious beginning for the new gallery. Located within a heritage fire station in Darling Street Rozelle, Artereal Gallery will continue to present an exciting program of contemporary and experimental exhibitions by both upcoming and established artists and curators, including substantial international content.

In an early discussion of their series of photographs titled Interiors featuring walls, corners, entrances, stairs, and columns lined in skin, Aziz and Cucher refer to the phenomenological experience of turning inward that leads to, “a sense of disorientation and identification.” Phenomenology is the study of structures of consciousness as experienced from the first-person point of view. But here the turn inwards that reveals something disorientating or unexpected is not limited to the viewer. Discrepancy and reversal is built into the work. The viewer’s experience emerges from an encounter with the work — an exchange of information.

The image presents an entirely uncanny situation: living skin transposed onto architecture, the human grafted onto the inhuman. The compositional strategy in Aziz and Cucher works involves making an image stand for a state of mind. The equation is based on substitution, whereby the artificial interior situation is modeled after an organic interiorized state.

Though the epithelial surfaces of these floorscapes have been radically altered by photo manipulation techniques, the scars, acne, eczema and irregular lines of exposure, old age, and poor hygiene are left — or rather made — visible. Counter to the cover girl principal of using airbrush or Photoshop to conceal blemishes, in Aziz and Cucher’s Interiors the skin’s irregularities are brought out into the open and even enhanced. This series of photographs neither promotes the proverbial beauty “skin deep” nor does its skin imagery celebrate choice formal or compositional characteristics. Neither as beauty revealed through a process of concealment, nor as beauty concealed behind the surface, this is not a work about beauty; rather the skin is here as a stand-in for what lies deeper, namely, the self. This anomalous scenario of applying the human exterior to built interiors and making the skin stand for something that can never be revealed involves a poetics of contradiction, a paradoxical form of metonymy.

Contradiction is so much a part of this project. The inside is made of an exterior, the self is made an other, the outside becomes enmeshed within, and the body becomes enmeshed within its surroundings. Like an animal that can camoflage itself in its natural environment the artists have described Interiors to be about a subject “incapable of demarcating the boundaries of its own body … [a subject] lost in the immensity that surrounds it.”

If Interiors represents an initial attempt to collapse, erase, even dissolve the separation between subject and environment, Aziz and Cucher’s most recent Synaptic Bliss series further explores possibilities for rendering the disorientated subject who can no longer distinguish the exterior from the interior.

The still images in this series are divided into two groups, SB-Nocturnes and SB-Landscapes with additional detail studies titled Odas. In these seemingly classical landscape vistas diverse forms are superimposed, become intertwined, and slowly emerge from an intensively colored flurry. Kaleidoscopic clouds evolve into trees, brances, meadows, flowers, and undergrowth. Each individual shape seems in constant flux, becoming distinguised by a shift in tone, orientation, or size of its colored texture. The SB- Landscapes and SB-Nocturnes appear like electronic impressionism with almost hallucinatory, disorientating effects.

The SB video work involves a steady stream of sensual data. Its fractured animated forms are often dense and difficult to orient. Aziz and Cucher created their first Synaptic Bliss video installation at Parc de la Villette in Paris. The conditions for this installation represent an ideal situation for the work. For this exhibition, a four-channel video and sound sequence was projected onto four walls of a built structure to surround and envelop the viewer. Synaptic Bliss – La Villette, a panoramic project, was optimally designed to exploit the peripheral visual area. Aziz and Cucher’s work is decisively contemplative, not interactive. Their digital-virtual environment offers new possibilities for exploring perception by linking viewers to the totality of a sensory field.

For shorter video works the artists have adapted their four-part Synaptic Bliss narrative to single channel versions constructed cyclically like nature evolving through four seasons. But the experience is unlike any conventional consideration of a landscape changing in time, for one becomes part of a transformation not bound by a beginning, middle or end.

Being present with and in the sound and image sequence of SB-Etudecan inspire deep reflection, heightened stimulation, or even disregard for time. Ultimately this work affords a new artistic and social experience of the world, a virtual but organic environment concept that includes audio-visual stimuli and a body that perceives. A thoroughly composed scenario designed to achieve aggregate experiences in the viewer Synaptic Bliss is conceived as a total work. Historically, the notion of a “total work” involves radical social as well as formal consequences.

More commonly discussed as a “total work of art” following Richard Wagner’s term of the Gesamtkunstwerk, this nineteenth century idea inseparably tied to the processes and the impact of modernization and industrialization. In Britian, William Morris introduced a comprehensive return to a pre-modern aesthetics of arts and crafts through industrialized manufacturing processes.

Morris proposed an architectural surrounding complete with fine art, wall coverings, furniture, carpets, and much more. Morris’ “total work” was not an exclusive realm for art; rather, he considered it an envelope for human experience, an all-embracing skin of sensuality where man was supposed to be unalienated from the disfiguring forces of modern life. In the tradition of Morris, but with a significantly more optimism about the potential of technology, Verner Panton’s “landscapes for living” (Wohnlandschaften) were meticulously designed and boldly colored totalities of furniture, lighting, carpets, and wall coverings that embraced and influenced the body with warm colors, soft textures, and organic shapes. It was a powerful experience of a coherent and thoroughly worked out whole in which the entire gamut of means to achieve effect played their part. In the most radical rooms the new ambiences were underlined with music and perfumes. Panton’s Phantasy Landscape from the Visiona II exhibition in 1970 was his most extreme example where facilities for sitting and lying grew out of the wall coverings and up from the carpeted floor, and the entire room was upholstered and illuminated through the differently colored textiles. This total experience effect was of a passage into the body. “It could be both experienced as a journey in space and as a journey into a microscopic universe, into the body’s organs and around the blood’s circulatory systems.”

The diverse forms and figures in Aziz and Cucher’s photographs and videos become likewise enmeshed in the surface structure of their environment, and in the complexity of one’s consciousness. This total sensorial experience is about merging exterior and interior, and thus, as a total work, it represents an attempt to stimulate and reveal the self within.