ALL THAT IS SOLID…

Cyrus Tang’s works are poignant meditations on loss and longing. Her art practice focuses on disappearance of things, of people, places or objects, and their dissolution into remembrance, sometimes fantasy. She seeks to portray absence as a presence, to reconstruct ephemeral mental states and sensations in permanent images or forms – as sites of loss. Paradoxically, what disappears leaves a phantom residue.

She has worked with a range of variously permanent yet also ephemeral materials including clay, water, ash, steam and snow in order to produce a visual representation suggestive of the contrast and contradiction between appearance and disappearance, and between ephemerality and permanence. The artist elaborates on the concept and the significance of hair for this exhibition: “In this project, ‘All That Is Solid…’, I use hair as trace material left behind by us in our everyday life. The traces of life are like the flow of some memory that wanders like a shadow around us.

Hair suggests fragility and the ephemeral, yet remains long after the body’s death. It carries an ambiguous materiality: a series of dead, keratinized cells, hair grows from beneath the scalp’s surface, which teems with blood vessels and bacterial life. Its inert biology is always animated as it splits and sheds. At once in and of the skin, extending and striating the body by drawing the subject beyond the dermis while rooting her within it, hair is the flesh’s last claim to life as it is eclipsed by death and decay.” 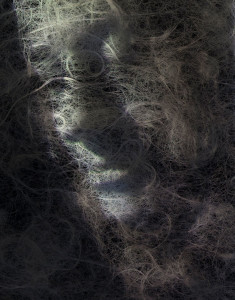 Born in Hong Kong, Cyrus (Wai-kuen) Tang moved to Australia in 2003. She has a degree in Fine Arts from Victoria College of the Arts and a Master of Fine Arts from Monash University completed in 2009. She has been awarded artist residencies at the National Art Studio in South Korea in 2012, with the Helsinki International Artist Program in 2013, Cite Internationale des Arts, Paris in 2009 and The Banff Centre Canada in 2008. Cyrus Tang was the recipient of the National Gallery of Victoria Trustee Award in 2003 and subsequent significant grants and prizes. Her works are held in the collection of Artbank and private collections in Australia and Japan.
Barbara Dowse