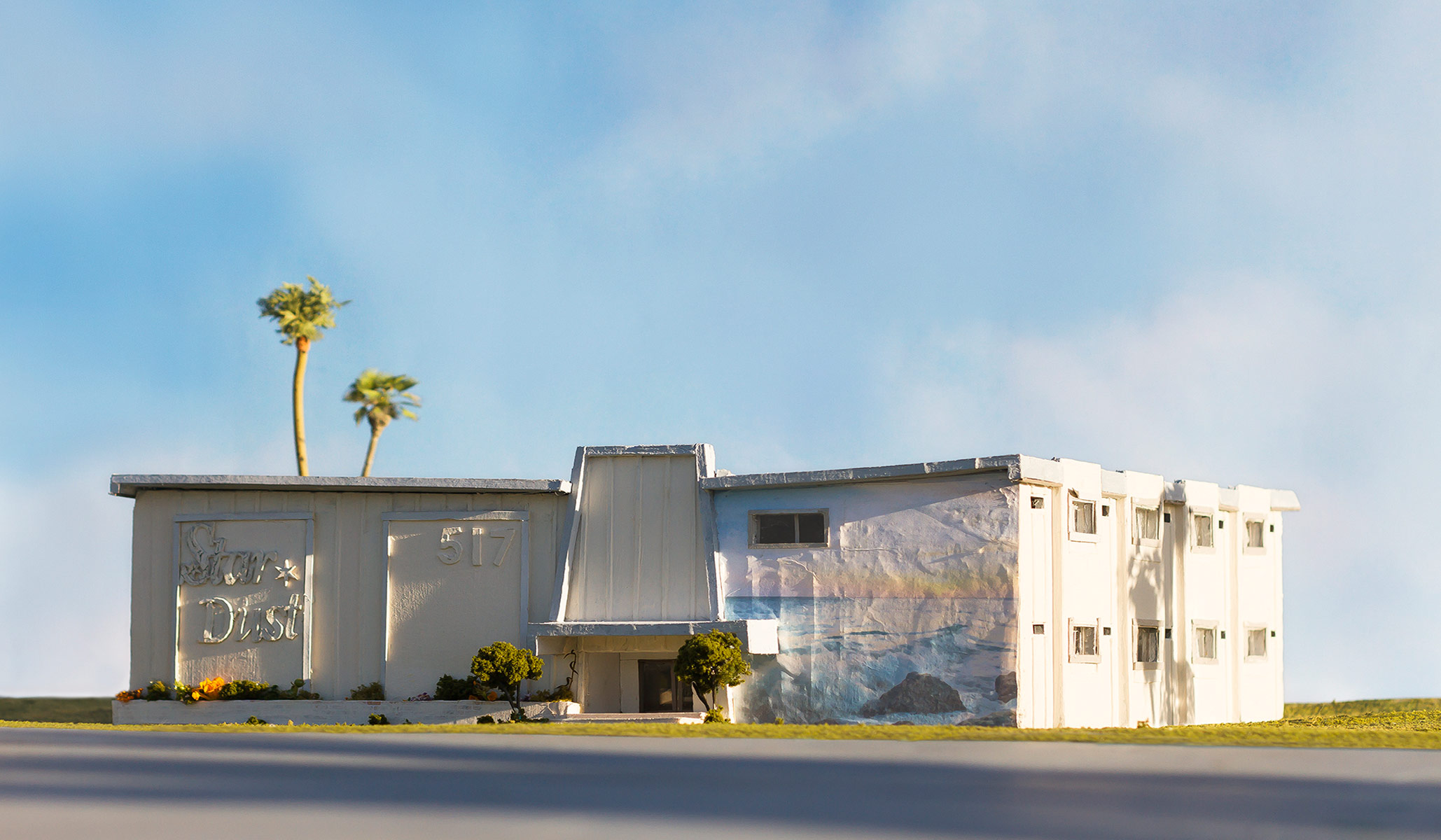 “Anna Carey’s Stardust is a photographic suite featuring retro styled ‘Stardust’ models from different parts of the world. The models exists in both ‘…then’ and ‘…now’ versions, resulting in a series of works which show how the buildings have metamorphosed over time since their glory days.

To create her fastidiously constructed ‘…then’ photographs, Anna sourced historical photographs of retro-styled ‘Stardust’ motels from the Internet, for use as reference images. She used these low quality photographs to design and roughly fabricate miniature models of the motels using flimsy materials such as paper and foam core. Carey photographed the intricately detailed models within cinematic-styled ‘sets’, which featured oversized photographs of real landscapes as their backgrounds. Taking the lead from early Hollywood filmmakers, Anna shot these highly-stylised tableaux vivants under natural light in Los Angeles – the city where she now lives and works.

Once the ‘…then’ versions of the various ‘Stardust’ models were created and photographed (showing the buildings in their theoretical ‘prime’), Anna used Google Maps to find images of how they currently looked. Using these images as a guide, Carey ‘renovated’ the models to produce realistic ‘…now’ versions of the motels. Creating updated locations into which they were placed, Anna re-shot the overhauled models to create present-day versions of the motels. The resulting photographs show how the buildings have metamorphosed  since their glory days, highlight features such as revamped signage, repainted walls and phased-out swimming pools.

Anna’s fascination with mid-twentieth century architecture arose while growing up in Queensland’s Gold Coast, where she was exposed to such edifices for the first twenty-odd years of her life. Later, whilst travelling to Los Angeles and Las Vegas, Carey got to see many of the original buildings whose style had influenced Gold Coast architects of the 1950’s and 1960’s.” 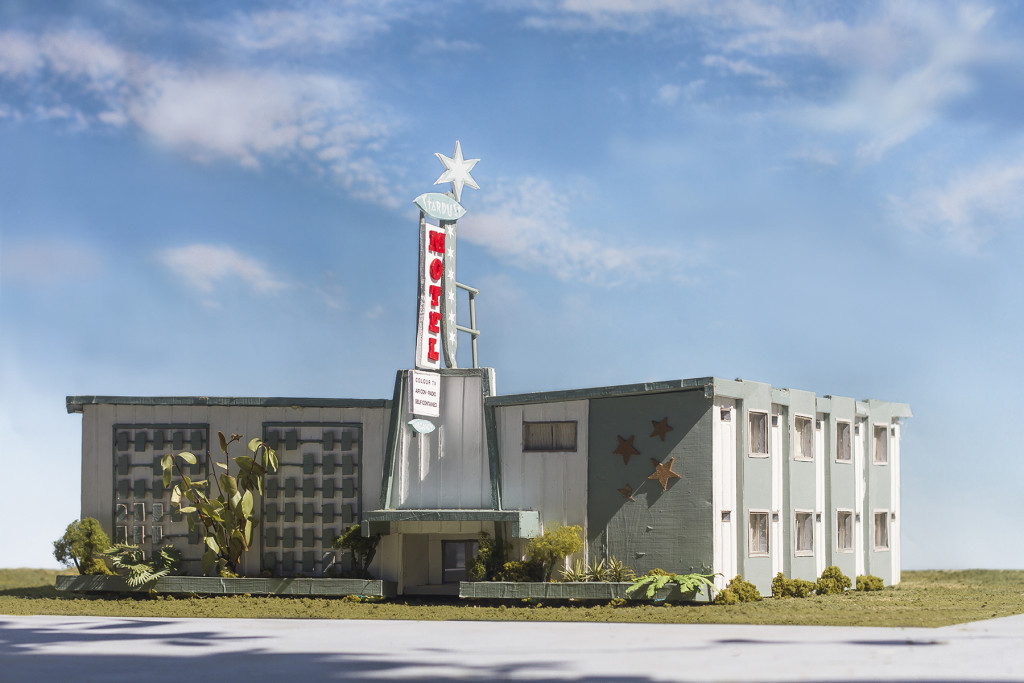 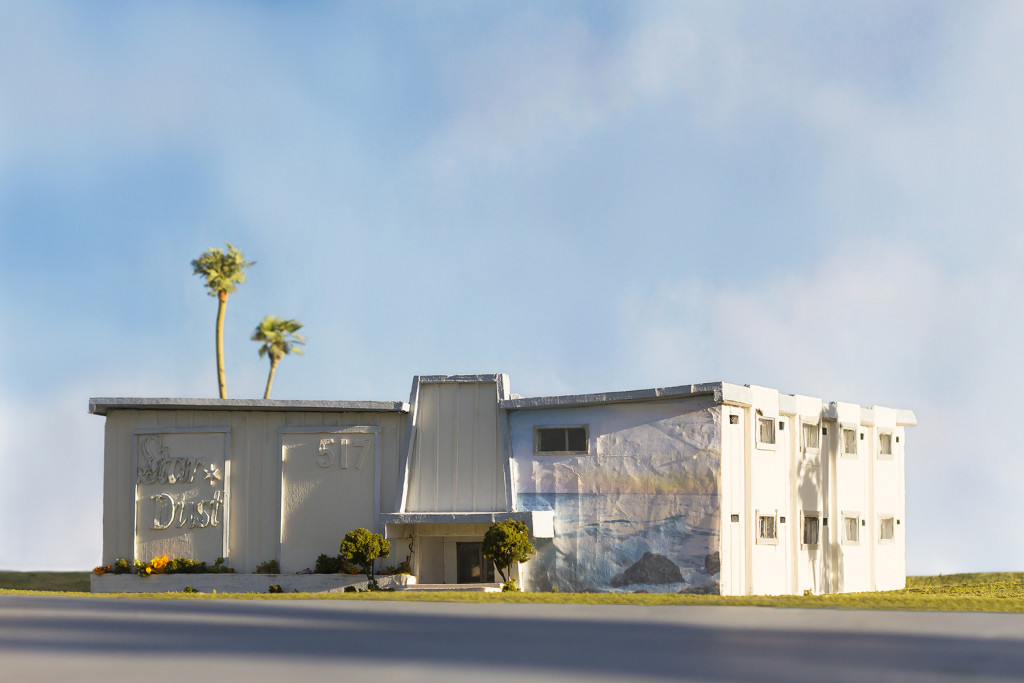 Anna Carey is an Australian artist based in Los Angeles, whose practice overlaps photography, video and sculpture.

With memory and recall as the only reference of permanency, she interweaves model-making, drawing and photography to create fictive architectural spaces based on the urban environments of cities such as her hometown of the Gold Coast in Queensland, alongside Los Angeles, Las Vegas and Palm Springs. Throughout her art practice, Carey focuses on architectural spaces as a medium to open up an imaginative realm for the viewer. She employs fragile cardboard constructions, documented in video and photographs to express and access the psychological sensibility beyond manufactured physical façades.

Since graduating from Griffith University in Queensland (2010), majoring in Fine Art and Art Theory with Honours (first class), Anna Carey has exhibited in numerous solo and group exhibitions throughout Australia and internationally.  Anna Carey’s works have been acquired for the collections of Artbank, The Gold Coast City Art Gallery, The National Gallery of Australia, The University of Queensland, Caboolture Regional Art Gallery and various major corporate and private collections. She has been a finalist in numerous significant art prizes including the Josephine Ulrick and Win Schubert Photography Award, the Churchie Emerging Art Prize and the Queensland Regional Art Awards. In 2016, she was selected to exhibit as part of the Auckland Festival of Photography. Anna Carey is currently undertaking a PhD in Fine Art through Griffith University.