2016 sees a decade since Artereal Gallery first opened with a solo exhibition of the photo-media works of renowned New York based collaborative artists Aziz+Cucher. The euphoric fantasia of their video SB_Etude from their hallucinatory series, Synaptic Bliss, is reprised for X/I.

Ten years on, we present a special two-part exhibition during March and April 2016 to celebrate the art and artists of Artereal and its exciting and organic evolution since 2006 when collector Luisa Catanzaro realised a long-held ambition to establish the gallery.

Innovation and experimentation reflect the approaches of both the gallery and its artists who are working at the forefront of contemporary practice. X/I, (as is X/II) is a mix of both newly commissioned works with some from our history by all represented artists alongside artists with whom the gallery has significant exhibiting relationships.

Conversations around identity, spirituality, environmental impacts, the phenomenon of light and the politics of gender continue through the decade, presented in media ranging across performance, photo-media, sculpture, painting, printmaking and installation.

The glowing neon sculpture, Here . I Am, by Noula Diamantopoulos was commissioned for the anniversary exhibitions. It signals both a sense of arrival and a cryptic philosophical and spiritual conundrum characteristic of the artist’s question-based Quest performances and her multi-media practice. 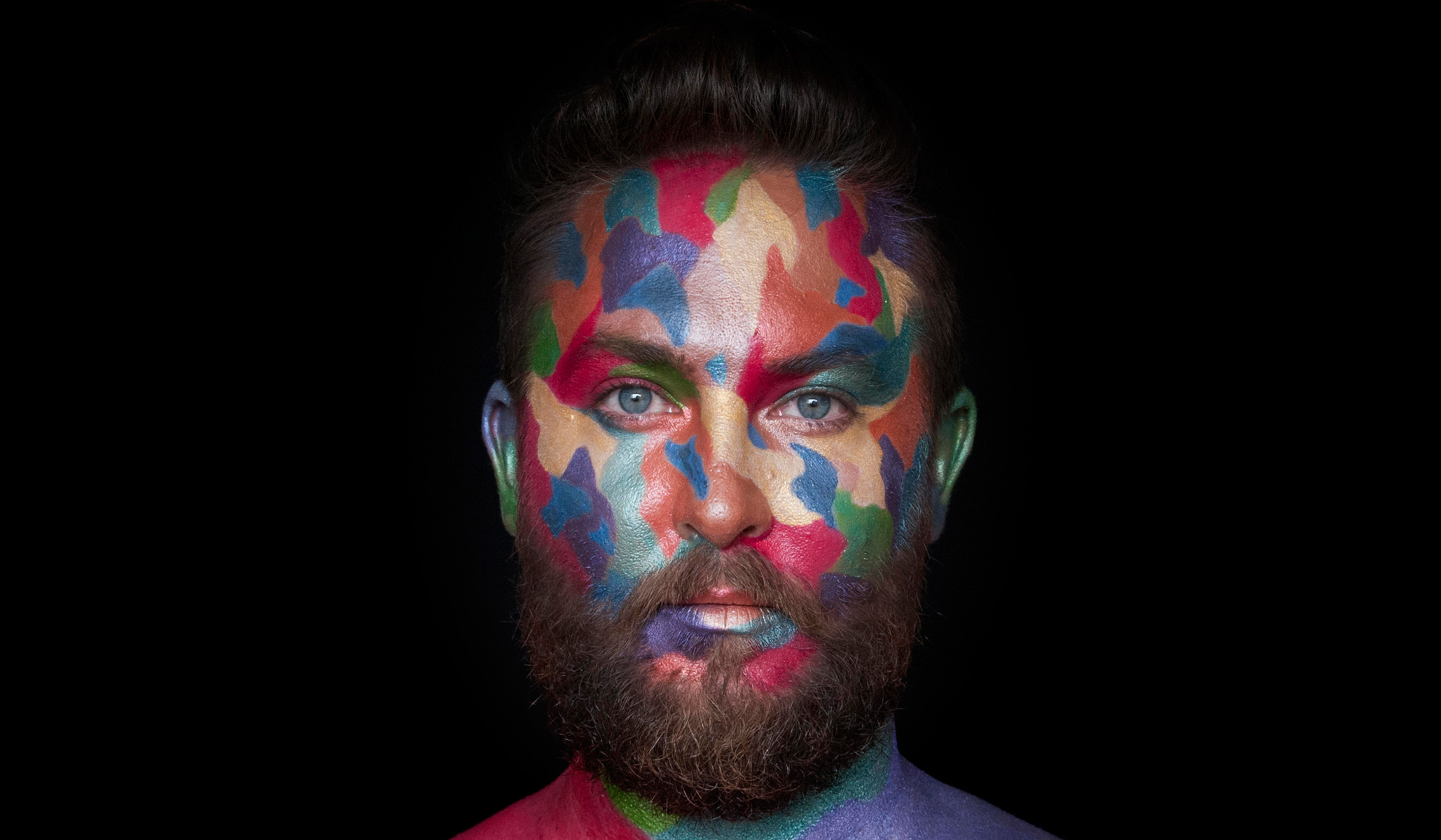 A photo-wall of images from provocateur artist Liam Benson whose works are an amalgam of performance, photography and sculpture, addresses the vexed issue of the politics of identity; of masculinity, of being black, and white, queer and straight in contemporary Australia. The charged dilemma of ‘Anglo’ anxiety, a condition as much about the present as it is the past, and how multiple ‘cultures’ are defined and interact within contemporary Australia is the focus for his potent manifestations of archetypes.

Car culture plays a significant role in interpretation of masculinity for many young males. Daniel Wallwork’s father owned a paint shop and Daniel grew up with the smell of paint and the industrial forms of cars and motor parts around him. Hello, Poppy Cock, a bird with attitude, from his tropical North Queensland home is painted in ‘Indy Orange’, the original GMH colour from the early Monaro models, with muscle car stripes and an exhaust pipe perch.

Andrew Lavery focuses on the exhilaration, dreams, risk-taking and the fragility of youth, poignantly realized in his paradoxical glass skateboard, Idealised ride II.

Gary Deirmendjian is a latter day flaneur. His appropriately low-fi video installation Sediment true is of and from the streets. Grit, grunge, detritus and his images of the homeless victims of our consumer throw-away society are all gathered on the streets. Their anonymous images, screened almost as an ‘aside’ from a pocket projector that is visible through a tear in a stacked palette of shrink-wrapped cardboard cartons imply perfunctory societal attitudes,  prompting the artist’s premise that “… democratic lands of plenty have their victims too I see …” 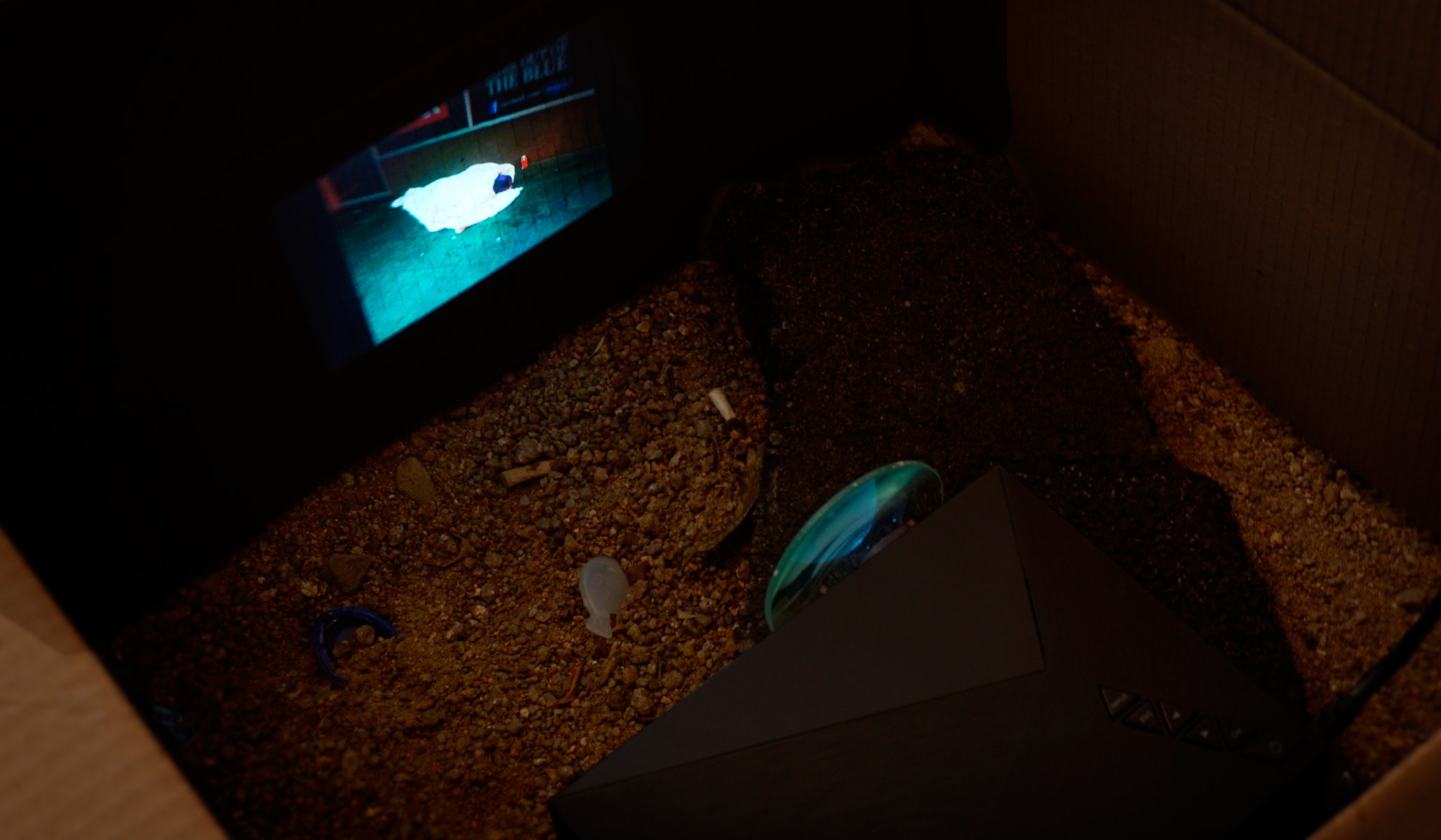 A related loss of personal identity in the grid of graffiti marked high rises of so-called ‘social housing’ estates is implicit in Damian Dillon’s gritty and ironic photographic essay, Happyland.

This collage and scraffiti style is echoed in a collaborative painting with James Birch for a form of ‘narrative abstraction’; a product of the choreography of the place-and-put mark-making and scratch-back and reveal of their painterly conversation.

Anne MacDonald’s still life photographs of discarded remnants of a child’s birthday celebration are a paean to the transience of childhood and a mother’s bitter-sweet sense of inevitability and loss experienced with the apparently celebratory rites of passage associated with each annual birthday party. A pall of sugar submerges the table-tops and party-ware in her latest series, Sugar, fed by recent media attention on the addictive, toxic and aging effects of high sugar consumption.

Crystalline white water bottles cast from salt and arrayed on a shelf for sale as in a supermarket are Ken and Julia Yonetani’s sinister portents of the future of food security at peril from the environmental impact of water salinity, climate change, modern agricultural method, relentless consumerism and public and governmental inaction and indifference.

Anna Carey focuses on architectural spaces as a medium to open up an imaginative realm for the viewer, inviting us to enter into the shadows of our stories and of collective memory. Her recent archive of iconic ‘Stardust’ motels from across Australia and the Americas present tandem versions – both as they were ‘then’, and now revamped. The artist constructs fragile cardboard architectural models, which she documents as video and photographs to express and access a psychological sensibility beyond the physical façades presented. The artifice is intensified as in a game of Chinese whispers where the original gets lost in the re-imagining imbuing her photographs with a nostalgic, cinematic reverie. 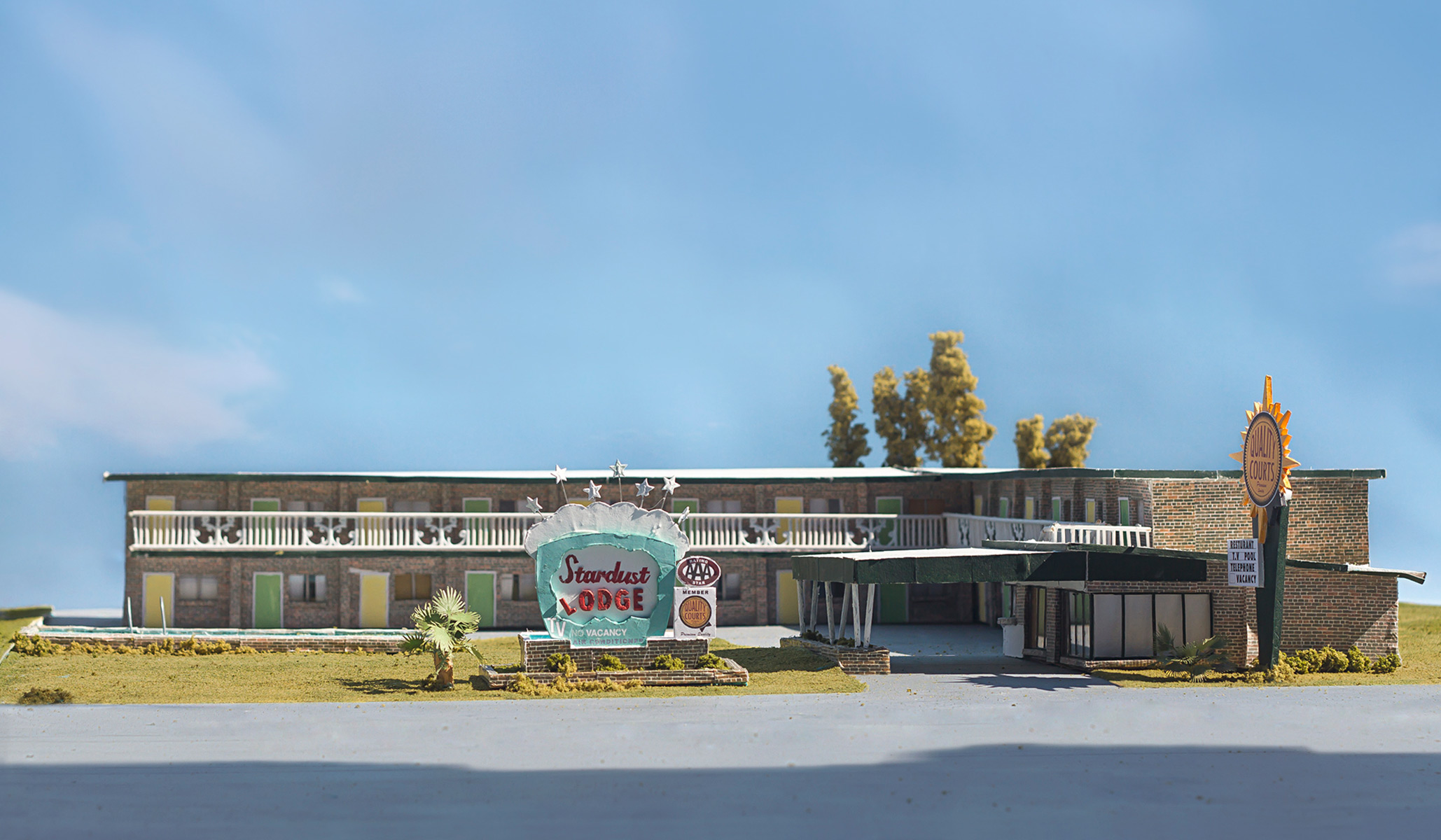 The Reminiscence suite of paintings by Hyun-Hee Lee, expressed with gestural calligraphic marks that are not legibly Korean characters, but along with her colour choices, are evocative of the emotion buried in her memories and the private texts of her diaries. White night and Winter journey develop from poignant memories:

“After a family trauma I remember it was heavily snowing all night. I depicted my hopes and dreams as if they were falling like the snow and my tears, overlaid with the memories of many white paper prayers hanging in the temple.”

Sam Holt’s engagement is with the imagination and the enigmatic. His painting style and approach is visceral and spontaneous distinguished by lyrical riffs of colour and linear flights of fancy. He works intuitively onto raw canvas. This translates as a painting style that is volatile, dynamic, spontaneous and speculative. He works ‘alla prima’, directly onto the canvas with paint laid on at first attempt and in a single sweeping line or application and no prior sketching. A painting is built on with multiple campaigns; the artist revisiting in response to idea and impulse. An element of performance and physicality distinguishes his paintings. The act of making is apparent – the heft of a laden brush as it arcs upward and the release and free flow of paint with the downward sweep. The lunge, the reach of the artist’s arm, of advance and retreat, put and place, are evident in the expressive marks and paint trails, redolent of the life force that is both a subject and way of making for Sam Holt.

Glen Henderson reflects on and flags the future; its fascination, its mystery, its romance and its evolution, for her video and print evocations of the virtual magic, the science and systems, the ultimate alchemy and mystique of birthing the technology ‘bug’.

Celestial magnitude and light intensity is captured in the ’organic’, intentionally anti-technology solar portrait, taken at 3.43 pm 14 May 1992, by the UK based pioneer of pin-hole photography, Christopher Bucklow.

The phenomenon and the immensity and play of light are at the heart of the photography of Simone Douglas. Vastness, infinity, space outside of space, outside of time are manifested in her large scale work, Atlas titled for everything we should know and the Greek god holding up the sky for eternity.

Beyond the gallery, reaching out to the community, connect, create, inspire, a socially engaged performance, is Sylvia Schwenk’s counter to the recent Paris terrorist attacks and the mounting fear around strangers and public places. Participants will come together to create new bonds on 6 March in Martin Place, site of  Sydney’s tragic terrorist siege 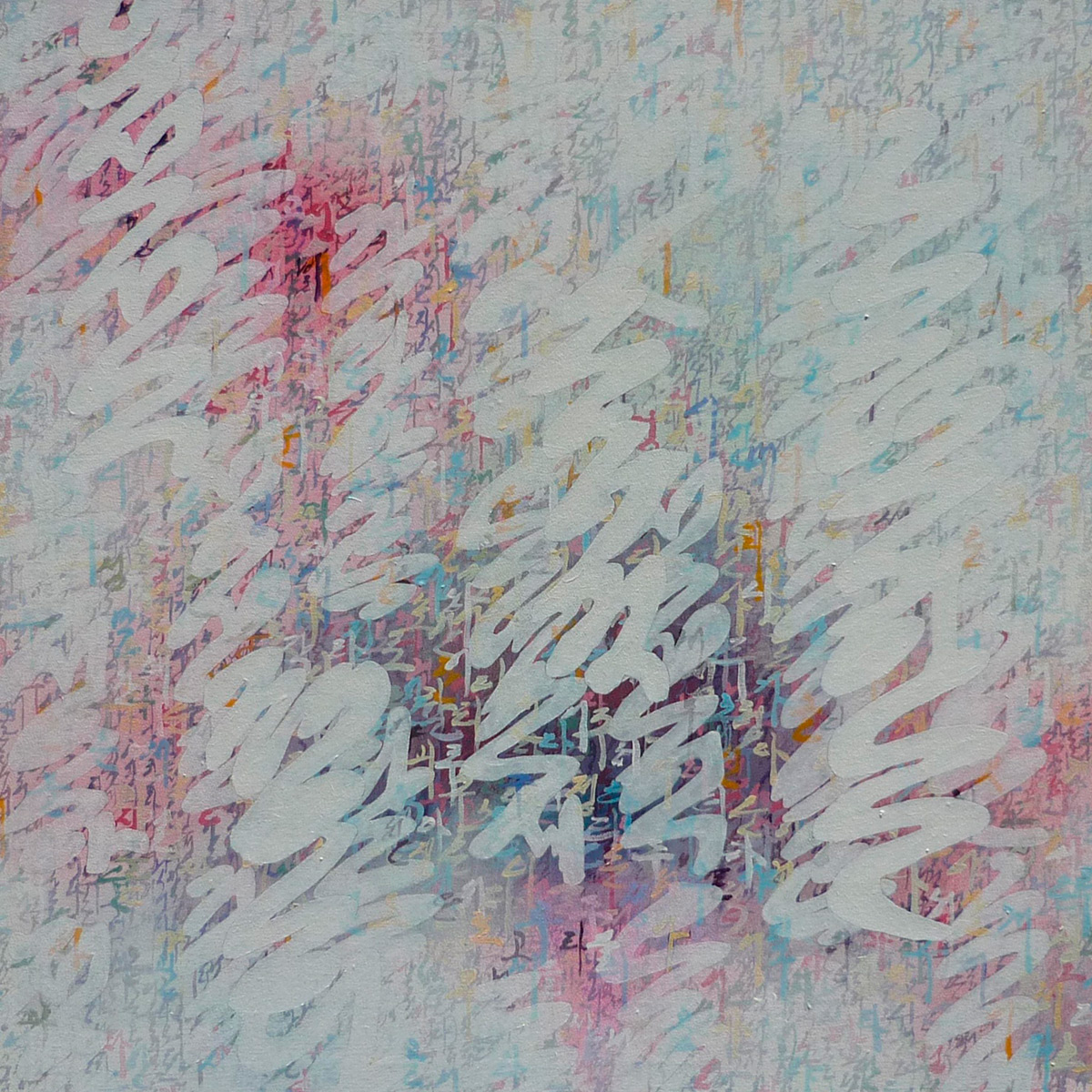